Accessibility links
Racial Bias Showing Up In Coronavirus Testing And Treatment : Shots - Health News Most available coronavirus data doesn't include ethnic or racial demographics, but public health experts say they fear the response to the pandemic will lead to predictable health care disparities. 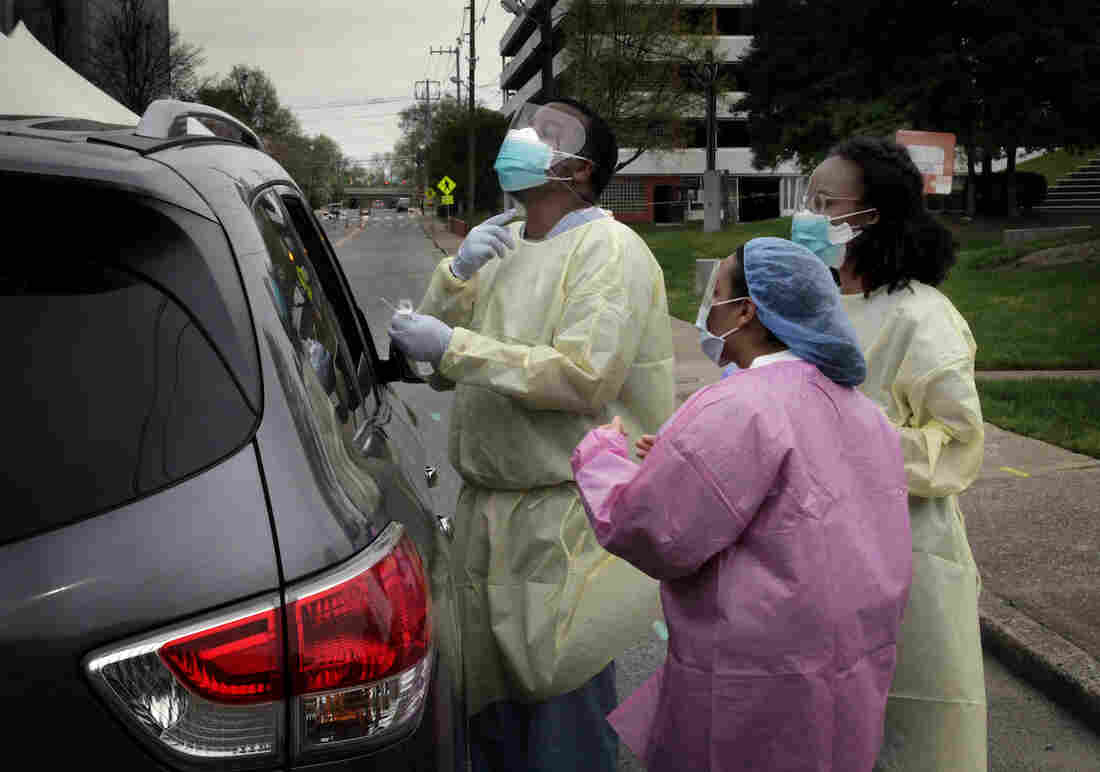 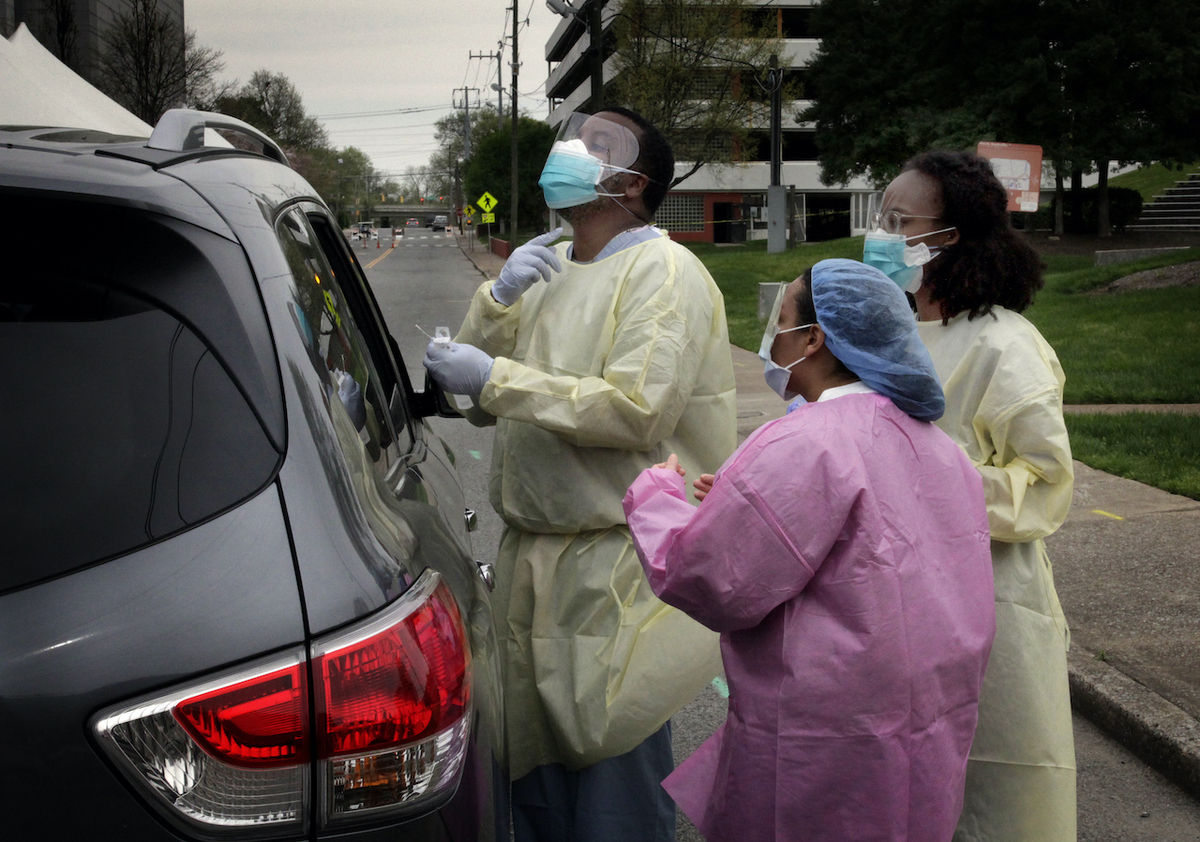 While more affluent parts of Nashville have had testing sites for weeks, this drive-through testing site at Meharry Medical College, in a historically African American neighborhood, experienced weeks of delays because staff couldn't acquire the needed testing supplies and gear like masks and gloves. It finally opened March 30.

The new coronavirus doesn't discriminate. But physicians in public health and on the front lines say that in the response to the pandemic, they can already see the emergence of familiar patterns of racial and economic bias.

In one analysis, it appears doctors may be less likely to refer African Americans for testing when they show up for care with signs of infection.

The bio-tech data firm Rubix Life Sciences, based in Boston, reviewed recent billing information in several states, and found that an African American with symptoms like cough and fever was less likely to be given one of the scarce coronavirus tests.

Delays in diagnosis and treatment can be harmful, especially for racial or ethnic minority groups that have higher rates of certain diseases, such as diabetes, high blood pressure and kidney disease. Those chronic illnesses can lead to more severe cases of COVID-19.

In Nashville, three drive-through testing centers sat empty for weeks because the city couldn't acquire the necessary testing equipment and protective gear like gloves and masks. All of them are in diverse neighborhoods. One is on the campus of Meharry Medical College — a historically black institution.

"There's no doubt that some institutions have the resources and clout to maybe get these materials faster and easier," says Dr. James Hildreth, president of Meharry and an infectious disease specialist.

His medical school is located in the heart of Nashville, where there were no screening centers until this week.

Most of the testing in the region took place at walk-in clinics managed by Vanderbilt University Medical Center, and those are primarily located in historically white areas like Belle Meade and Brentwood, Tennessee.

Hildreth says he's observed no overt bias on the part of health care workers, and doesn't suspect any.

But he says the distribution of testing sites shows a disparity in access to medical care that has long persisted.

But if anyone should be prioritized, Hildreth says it's minority communities, where people already have more risk factors like diabetes and lung disease.

"We cannot afford to not have the resources to be distributed where they need to be," he says. "Otherwise, the virus will do great harm in some communities and less in others."

In Memphis, a heat map shows where coronavirus testing is taking place. It reveals that most screening is happening in the predominantly white and well-off suburbs, not the majority black, lower-income neighborhoods.

Rev. Earle Fisher has been warning his African American congregation that the response to the pandemic may fall along the city's usual divides.

"I pray I'm wrong," Fisher says. "I think we're about to witness an inequitable distribution of the medical resources too."

Around the nation, concentrated pockets are popping up. In Milwaukee, African Americans made up all of the city's first eight fatalities.

Wisconsin Governor Tony Evers says he wants to know why black communities seem to be hit so hard. "It's a crisis within a crisis," Evers said in a video statement.

The Centers for Disease Control and Prevention is also on the ground on the north side of Milwaukee, as well as several other hot spots, looking into the outbreak in black neighborhoods. Nationwide, it's difficult to know how minority populations are faring because the CDC isn't reporting any data on race.

A few states are releasing more demographic data, but it's incomplete. Virginia is reporting race, yet the state's report is missing that information for two-thirds of confirmed cases.

Dr. Georges Benjamin of the American Public Health Association has been pushing health officials to start monitoring race and income in the response to COVID-19.

"We want people to collect the data in an organized, professional, scientific manner and show who's getting it and who's not getting it," Benjamin says. "Recognize that we very well may see these health inequities."

The subjectivity of symptoms

Until he's convinced otherwise, Benjamin says he assumes the usual disparities are at play.

"Experience has taught all of us that if you're poor, if you're of color, you're going to get services second," he says.

The subjectivity of coronavirus symptoms is what worries Dr. Ebony Hilton the most.

Hilton is an anesthesiologist at the University of Virginia Medical Center who has been raising concerns.

She sees problems across the board, from the way social media is being used as a primary way of educating the public to how quickly drive-through testing has expanded. The first requires internet connection. The second, a car.

Hilton says the country can't afford to overlook race, even during a swiftly moving pandemic.

"If you don't get a test, if you die, you're not going to be listed as dying from COVID," she says. "You're just going to be dead."