Accessibility links
Preparing Hospitals For Ventilator Shortages : Shots - Health News Many states are projected to have excessive demand for ventilator machines in the coming weeks, but no state government has formally asked hospitals to prepare for difficult and complex crisis triage. 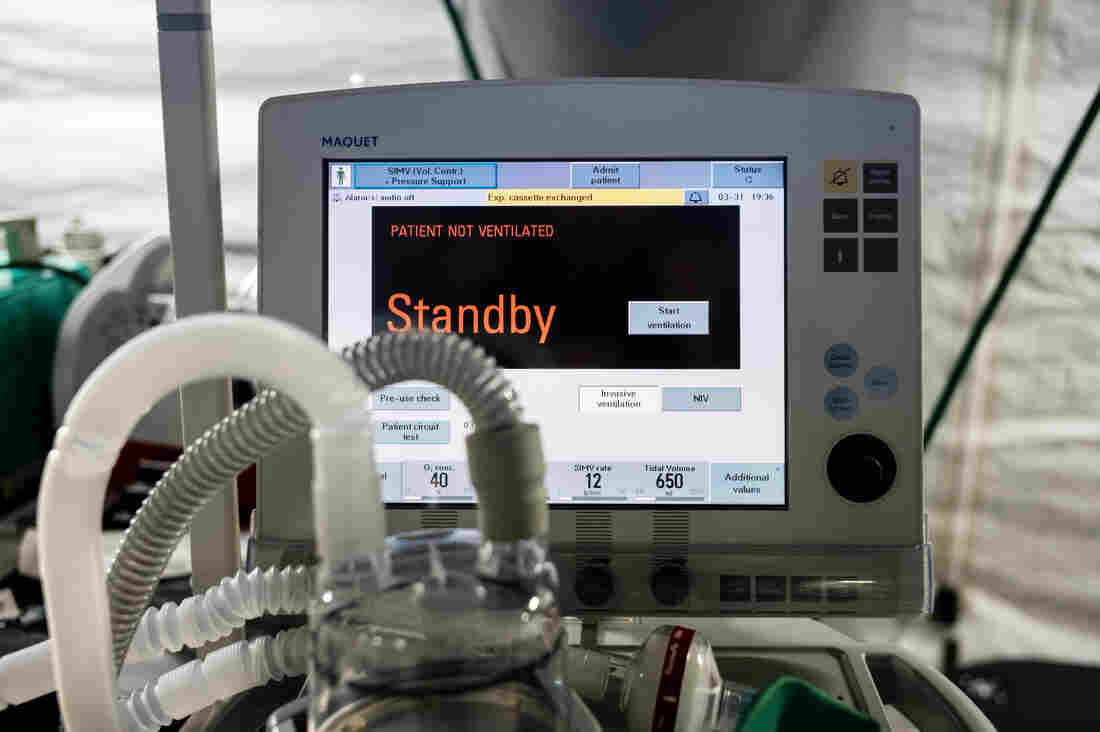 A ventilator and other hospital equipment is seen in an emergency field hospital to aid in the coronavirus pandemic in Central Park in New York City on Tuesday. Misha Friedman/Getty Images hide caption 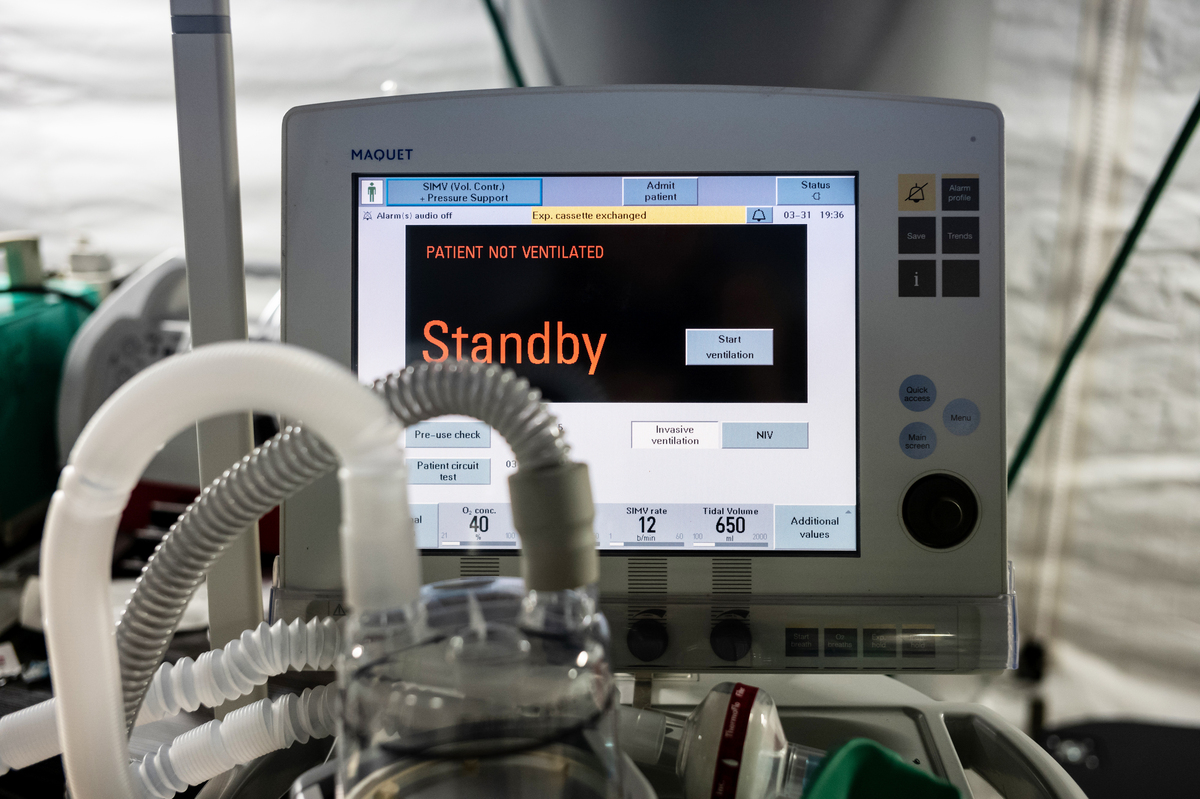 A ventilator and other hospital equipment is seen in an emergency field hospital to aid in the coronavirus pandemic in Central Park in New York City on Tuesday.

Medical rationing is not something Americans are accustomed to, but COVID-19 may soon change that.

The specter of rationing is most imminent in New York City, where the virus is spreading rapidly and overwhelming hospitals with patients.

According to New York Gov. Andrew Cuomo, the state has 2,200 ventilators in its state stockpile. Current COVID-19 case projections suggest the state may not have enough of the machines, which help critically ill people breathe, as soon as next week.

Ventilators Are No Panacea For Critically Ill COVID-19 Patients

The survival rate for COVID-19 patients on ventilators may be as low as 20%, though the machines' effectiveness for those patients is still being studied.

"At the current burn rate, we have about six days of ventilators in our stockpile," Cuomo said on Thursday. If there are not enough ventilators to provide one for every patient who might benefit, hospitals in New York would need to begin making excruciating decisions about who will receive what care.

So far, Cuomo and other governors have not formally directed hospitals to prepare for so-called crisis triage. Asked by a reporter on Tuesday how the state would decide who got ventilators if there were too few to go around, Cuomo replied, "I don't even want to think about that consequence. I want to do everything I can to have as many ventilators as we'll need."

"There's no protocol," he continued, before describing state efforts to increase the number of ventilators available.

However, New York State does have a protocol for allocating ventilators during a pandemic. The 2015 guidelines were developed by a state bioethics task force over more than a decade, and lay out detailed protocols for saving the maximum number of lives by assessing how likely every patient is to benefit from ventilator therapy.

The authors of the guidelines noted that the protocols are most effective when the governor or state health commissioner formally directs hospitals to follow them.

On Thursday, the president of the Medical Society of the State of New York, Dr. Art Fougner, released a statement suggesting that, in the absence of clear orders from the state health department, New York hospitals should use the 2015 guidelines and immediately start using ethics committees to help make decisions about who gets care if there are limited supplies.

"At this point, the most difficult decisions facing physicians will have to be made," states Fougner. "Already, some emergency physicians are reporting being told the equivalent of 'Use your best judgement. You're on your own.'"

When it comes to rationing, doctors and hospitals have good reason to want the support of public officials. And it's a tension that may soon be apparent beyond New York.

"If you violate a standard of care you can be sued for negligence or medical malpractice," says Diane Hoffmann, a University of Maryland Law School professor and an expert on health ethics. "For example, if somebody is on a ventilator, and they're doing relatively well, you couldn't take them off without facing criminal or civil liability."

That changes when public officials declare "crisis standards of care."

"Most states have a statute in place," she says. "If the governor declares that type of emergency, it authorizes the governor to suspend other laws that might prevent hospitals from rationing."

But beyond liability worries, doctors say they also want clear ethical rules for rationing. In Washington State, which saw the country's first COVID-19 deaths, hospitals and doctors have been familiarizing themselves with a document called the Scarce Resource Management and Crisis Standards of Care Overview.

"We would be consulting a grid, if it got to that point," says Dr. Randall Curtis, a professor of medicine and a pulmonary and critical care specialist at the University of Washington in Seattle. He hopes rationing can be avoided, but he and his colleagues have been reviewing the state's triage process, just in case.

Most states have versions of these guidelines, many written at the encouragement of the CDC in the years after 9/11. Hoffmann says some were drafted by committees of physicians and bioethicists, while others were based on input from the community. As a result, the rules vary.

"There's pretty much agreement on short-term survival," Hoffmann says, meaning the policies generally favor giving scarce resources to patients with the best chances of getting well enough to leave the hospital. But she says they differ on secondary considerations, especially questions of long-term survival. "Are we going to look at quality of life? Dementia, other disabilities?"

Patients' expected life span has become an especially contentious factor. Last week, the online version of the Journal of the American Medical Association published a viewpoint article calling for ventilator allocation to take into consideration "the number of years of life saved."

The American College of Physicians countered with a public statement warning against age discrimination.

"We do not think we should be using the concept of maximizing the number of life-years that are achievable afterward," says Dr. Robert McLean, ACP president and a physician in New Haven, Conn. "It is inherently biased against the elderly or the disabled, who may not live as long after they would potentially recover."

If a younger person is given preference for scarce medical care, McLean says it should be because that person has a better short-term prognosis, not simply because the person is younger.

Over the weekend, the U.S. Department of Health and Human Services reminded health care providers not to push people with disabilities or elderly people to the bottom of the list when it comes to care.

The fact that Americans are having these ethics debates now, in the shadow of a looming wave of COVID-19 patients, is a worry for the physicians and ethicists who've spent years laboring over these policies.

Adding to that concern is the apparent reluctance of public officials, so far, to officially declare "crisis standards of care."

Valerie Gutmann Koch, an attorney and bioethicist at the University of Chicago, says states might want to take that step even before they run out of resources such as ventilators.

"Having time to prepare is incredibly important," Koch says. "Not just for the institutions and the providers, but also for the public. ... Because without the trust of the public in how these things are being done, and without transparency, there's going to be even more pushback and potentially more liability."

But Dr. Vicki Sakata, an emergency physician in Tacoma who's been deeply involved in the development of Washington State's crisis standard of care policy, says states should do everything they can to avoid crossing that line.

"It's absolutely the last thing we want to do," Sakata says. To her, a big reason to plan crisis standards of care is to figure out how to avoid letting things get to that point. But once things do, she says invoking a clear rationing policy will help.

A previous photo caption on this story incorrectly stated that a ventilator was shown in the image. In fact, the device shown was an aspirator. We have changed the photo.