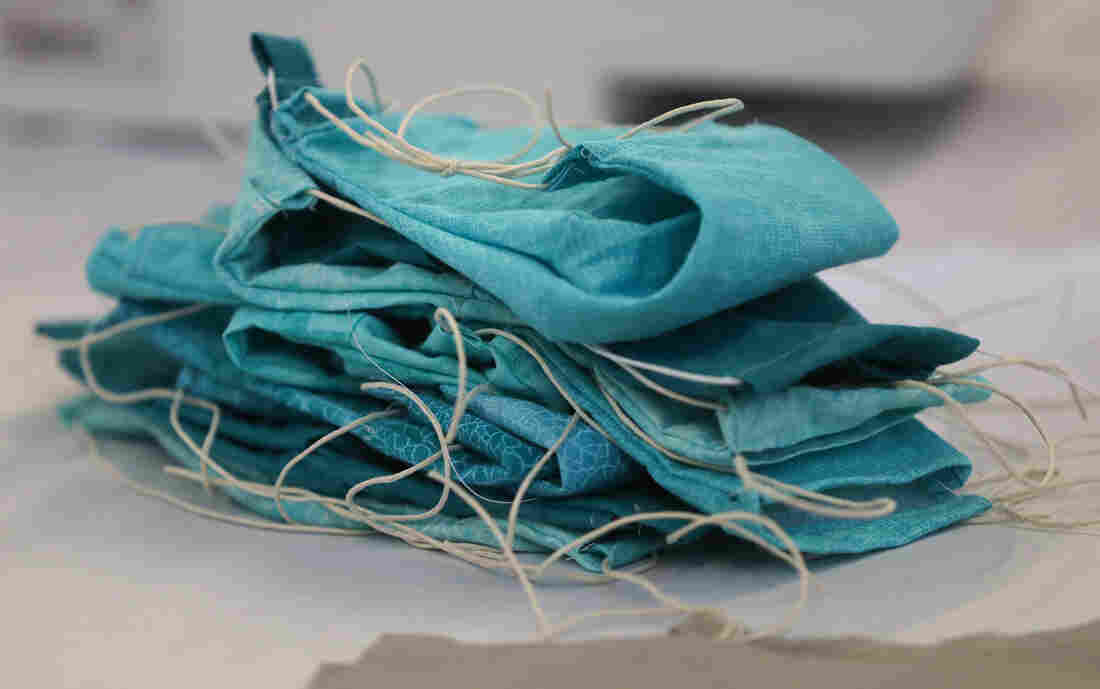 An inspector general's survey of U.S. hospitals finds them scrambling for supplies — even food and toilet paper. They've had to get masks from nontraditional places like autobody shops and nail salons, and also ask for handmade donations. Mario Tama/Getty Images hide caption 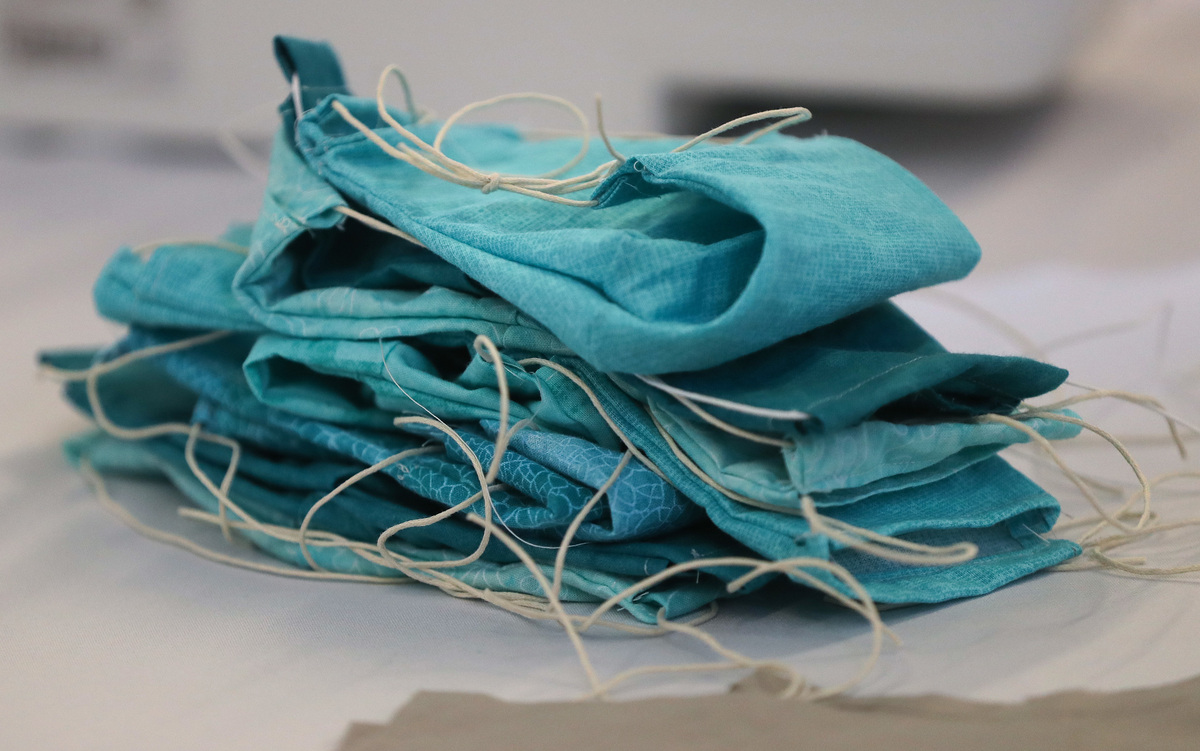 An inspector general's survey of U.S. hospitals finds them scrambling for supplies — even food and toilet paper. They've had to get masks from nontraditional places like autobody shops and nail salons, and also ask for handmade donations.

Hospitals are trying to make their own disinfectant from in-house chemicals, running low on toilet paper and food, and trying to source face masks from nail salons.

Those are some of the findings from a snapshot survey of how America's hospitals are handling the coronavirus crisis. The survey was done over five days, from March 23-27, by the U.S. Department of Health and Human Services' Office of Inspector General. Ann Maxwell, who oversaw the report as assistant inspector general for evaluation and inspections, says it's "the first objective, independent, national look at how hospitals are addressing the COVID-19 response."

Maxwell says her office worked fast to get this report done. Dozens of staffers working on it called 323 hospitals around the country. "We asked them for just 15 to 20 minutes of their precious time," Maxwell says. Administrators answered questions about their biggest challenges, their strategies to address those challenges and how the government could better help.

"It's an incredibly comprehensive report done on very short notice," says Gerard Anderson, director of the Johns Hopkins Center for Hospital Finance and Management. He adds it's significant that the report is coming from this office, since others in the federal government "tend to listen very closely to somebody like the inspector general."

During a White House briefing Monday night, President Trump addressed the report and the concerns it raises about continued testing delays, saying hospitals' complaints about delays in test results for the coronavirus were "wrong." He suggested the inspector general was politically motivated, and that hospitals and states should do their own testing.

Adm. Brett Giroir, who is in charge of the federal government's efforts to increase testing, said at the same press briefing that the report was done at a time when testing efforts were still ramping up. He also says the report "mixes up all kinds of things," but did not elaborate.

Here are some highlights of the report:

"Some facilities stated that they turned to non-traditional sources of medical equipment and supplies [...] such as online retailers, home supply stores, paint stores, autobody supply shops, and beauty salons."

One hospital said its shipment of face masks from the federal government had all expired 10 years ago. In another shipment of 1,000 masks, half were child-sized. Yet another hospital said when trying to buy supplies, masks that had been 50 cents were now $6 apiece.

"[Hospitals] often end up in competition against each other," Maxwell says. "We heard hospitals report that they felt there could be more of a role for the federal government to help intervene and coordinate the supplies that they needed and the distribution of those supplies."

She adds the federal government has taken steps to try to address this issue, "but when we talked to hospitals [in late March], they were still reporting that this was a serious challenge."

"Hospitals reported insufficient inventory of essential cleaning supplies, such as disinfectant wipes, hand sanitizer, and hand soap. One hospital [...] described making disinfectants, such as bleach, out of on-hand chemicals, such as chlorine."

All sorts of critical supplies were hard for hospitals to get and keep in stock. Beyond cleaning supplies, hospitals also reported shortages of "intravenous therapy poles, medical gas, linens, and food." Multiple hospitals said their supply of toilet paper was running low.

Ventilator shortages also came up in the report. Hospitals reported renting them, converting other medical equipment like anesthesia machines to use as ventilators, and fitting ventilators with additional hoses to support more patients.

Administrators were also concerned about having adequate staff to operate them. "We had one hospital administrator say to us, you can make thousands of ventilators, but it will take an army to manage that equipment and to care for those patients," Maxwell says.

Testing delays have ripple effects, Maxwell says. "When a patient comes in and gets tested, the hospital needs to treat that patient as potentially a positive COVID patient," she explains. "So that means they are taking up a bed in the hospital for the length of time it takes for that test to come back."

It also means, "when hospital staff are engaging with that patient, they are in full protective gear so they are not exposed to the virus," she says. After all of that, when a test comes back negative, that means tons of masks and gowns and gloves may have been wasted.

Anderson of Johns Hopkins says in reading the report, "the most startling surprise for me was that nursing homes are not accepting patients until they've been tested to be free of COVID-19, which means that the hospital will probably keep that patient another seven days that they don't need to be in the hospital."

"Some hospitals reported that the multiple changes in guidance contributed to a greater sense of confusion, fear, and distrust among staff that they can rely on hospital procedures to protect them."

Since COVID-19 is an emerging infectious disease, "it's not surprising that our understanding is evolving and the response to that is evolving," Maxwell says. Understanding those difficulties, hospitals still reported they needed more clarity from the federal government in its messaging. The constantly changing guidelines were confusing for staff, as were contradictory messages between federal and state authorities.

"[Hospitals] asked for a single place where they could find information that they needed," she says, particularly "evidence-based guidance, as well as reliable, predictive models and data that would help them plan and prepare."

The confused messaging to the public came up, too. Hospitals reported that people were still arriving at the hospital when not very ill, taking up valuable resources and gear.

"Some administrators shared that their hospitals were training certain medical staff, like anesthesiologists, hospitalists, and nursing staff, to help care for patients on ventilators."

The report isn't just a survey of challenges — it's an attempt to inform policymakers and allow hospitals to learn coping strategies from each other, Maxwell explains.

Dr. Irwin Redlener, director of the National Center for Disaster Preparedness at Columbia University, says he found the staffing strategies outlined in the report helpful. He was encouraged to see hospitals retraining staff, using more telemedicine, and connecting their doctors and nurses and other essential personnel with "child care, laundry, grocery services, hotel accommodations, all their mundane but necessary functions of life," he says.

Overall, the snapshot the report shows is one of hospitals scrambling to make do in an impossible situation.

"The question now will be, how will the government respond?" Redlener says. "Will they help to fix some of these issues? Will the shared strategies help various hospitals help one another? I don't know. We can only hope."

He says these shortages and problems aren't going anywhere — and we're not at the peak of the outbreak yet.