Accessibility links
Coronavirus Peaks By State: How Social Distancing Measures Are Helping : Shots - Health News Wondering how bad the coronavirus crisis is going to get where you live? New modeling offers state-by-state projections. 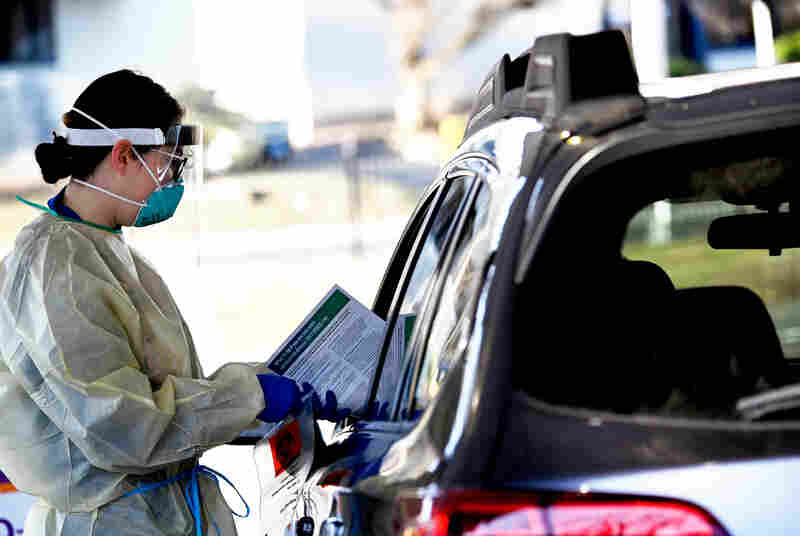 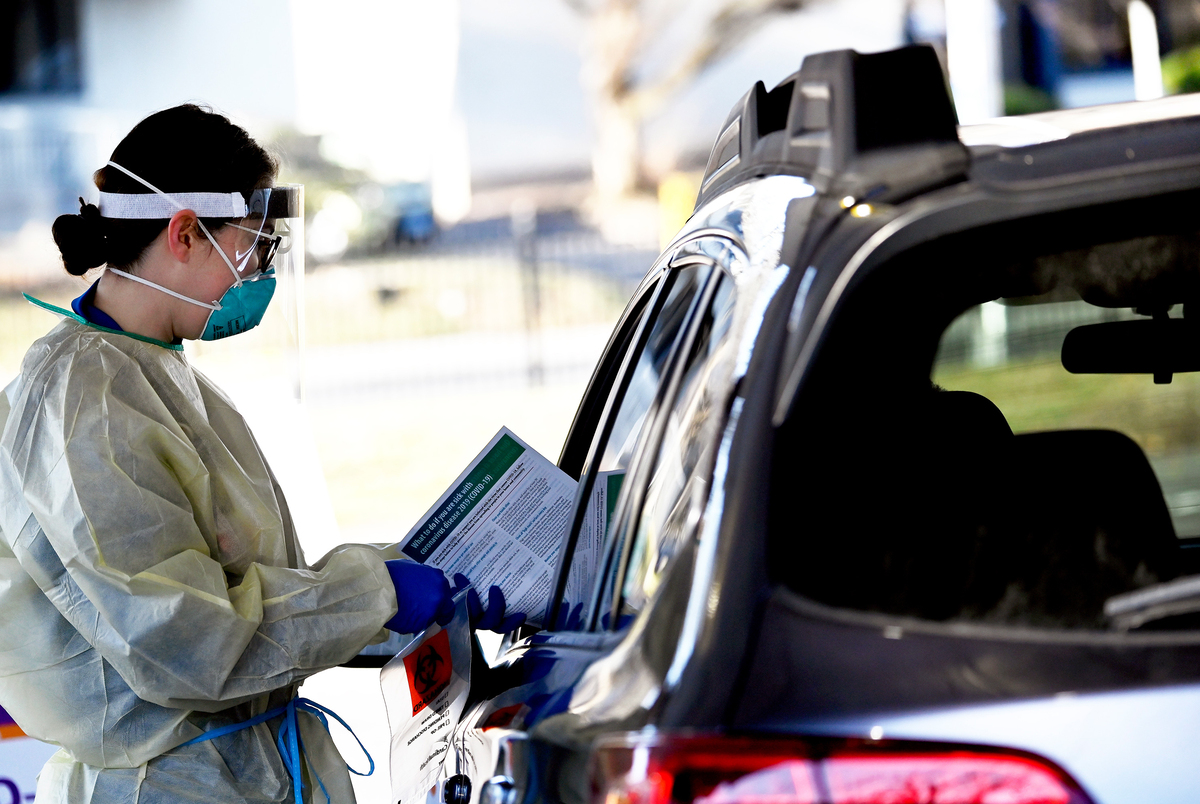 As COVID-19 surges in places throughout the country, Americans are left to wonder, "When will my state hit its worst point?"

A widely cited model offers some predictions. The Institute for Health Metrics and Evaluation's COVID-19 projections were cited in recent White House briefings and take into account how the pandemic is playing out in several countries around the world. They incorporate the current trend line of deaths in U.S. states and the estimated impact of social distancing measures to predict when each state might reach peak daily deaths and hospital usage.

While projections like these are imprecise, they're useful to policymakers and hospital leaders trying to prepare for surges. The model was designed to give hospitals an idea of how quickly they need to expand capacity and by how much.

Researchers at IHME make frequent updates to the model based on newly available data. As of the newest update, released Friday, the modelers project that U.S. deaths peaked Friday. Some earlier updates have resulted in significant shifts. For instance, a recent major update, made April 5, showed fewer people dying over a shorter period of time than originally predicted, the model's lead researcher Chris Murray says.

However, he cautioned that when social distancing measures lift, outbreaks could spark up again.

"If you ease up prematurely the epidemic can rebound right back to the level we are at now in a matter of weeks," Murray says. "So the potential for rebound is enormous if we let up on social distancing."

To compare states with vast differences in populations, NPR analyzed the projections by looking at deaths per 100,000 residents.

Want to see the projection for your state? Jump to our state lookup tool.

It's important to note that much uncertainty comes with modeling into the future. The national model had a huge range between its low and high estimates for peak daily deaths, which it now says came to pass on April 15. But individual states have large gaps, too. The model, for example, estimated New York's daily deaths could range between 147 and 2678 at its peak, which it estimates the state reached April 16.

In these models, the peak projects the date when a state's curve stops increasing and begins a consistent trend downward. Sometimes that's not the date of the current highest recorded number of daily deaths.

Murray acknowledged the challenge that the wide range of uncertainty poses to decision-makers at a press conference Monday announcing updates. He advised hospitals to hope for the best-case scenarios — but to prepare for the worst.

"In places where there's a rapidly rising epidemic — New York, New Jersey, now other places — the ability to predict that exact peak is not as accurate as we previously said," Murray said. "Resource planners should pay attention to the upper bound so we're not caught off guard."

New York had surpassed 18,000 COVID-19 deaths as of Monday. It is expected to be the hardest hit state, in terms of raw numbers. The model projects between 14,000 and 43,000 total deaths in the state by Aug. 4, and projected that daily deaths peaked April 16. That amounts to between 77 and 221 deaths for every 100,000 New Yorkers, putting New York among the worst hit states per capita as well.

The model also looks at hospital bed shortages. It projects a potential shortfall in New York, culminating this week. The state was projected to reach peak resource use on April 15, when it would need between 7,000 and 43,000 beds. Under normal circumstances there are only 13,000 beds available in the state, according to the modelers. (This does not take into account ongoing efforts to expand bed capacity.)

The effects of social distancing

The model projects California will see fewer deaths than New York, despite having twice as many people living in the state. That gives California a much lower death rate relative to its number of residents.

"California started social distancing before New York. [Californians] had one week ahead of them in order to deal with the problem and took the right measures," Mokdad says. "And we're seeing the benefit."

The model makes some key assumptions about how state leaders will act — and depending on what they do, the picture could change. First, it assumes that all states will continue social distancing through the end of May, which is longer than the White House has asked Americans to practice social distancing. Second, it assumes states that have not already implemented three key social distancing measures — closing schools, closing nonessential businesses and issuing stay-at-home orders — will do so in one week.

This second assumption is particularly important for a state like Massachusetts, which has closed nonessential businesses and schools, but has not ordered residents to stay at home. Republican Gov. Charlie Baker has resisted calls to mandate a stay-at-home order, though he has enacted a voluntary stay-at-home advisory. "I do not believe I can or should order U.S. citizens to keep confined to their homes for days on end," Baker said last month.

The model's highest projections could spell tragedy for Massachusetts, estimating daily death tolls at the upper bounds nearly on par with what New York has experienced so far. The average figure it forecasts would still be devastating for a state of its size — the state was projected to hit peak daily deaths April 20 with 135 deaths that day.

Through social distancing, Mokdad says, communities and individuals can still make a difference in how bad things will get.

"We're modeling [based on] your deck of cards right now," he says. "If you change the deck of cards, it's going to be totally different. If people do a better job, it's going to go down. If they don't — if they ignore recommendations and start partying and going out — then they will have more mortality."

A final important note about this model: The data show the day each state may reach its worst day for deaths between now and the beginning of August. It does not reflect surges that could happen after that.

You can view your own state's peak and projected totals below, or see how all states compare.

Note: This projection is current as of April 20, at 5 p.m. ET, and will be updated periodically as the modelers input new data. The visualization shows the day each state may reach its peak between now and Aug. 4. The projected peak is when a state's curve begins to show a consistent trend downward.