Accessibility links
As Coronavirus Symptoms Abate, How Do I Know When I'm No Longer Infectious? : Shots - Health News If you have COVID-19 or suspect you do, here's what doctors say about what to expect and when you can stop isolating.

How Long Does It Take To Recover From COVID-19?

How Long Does It Take To Recover From COVID-19? 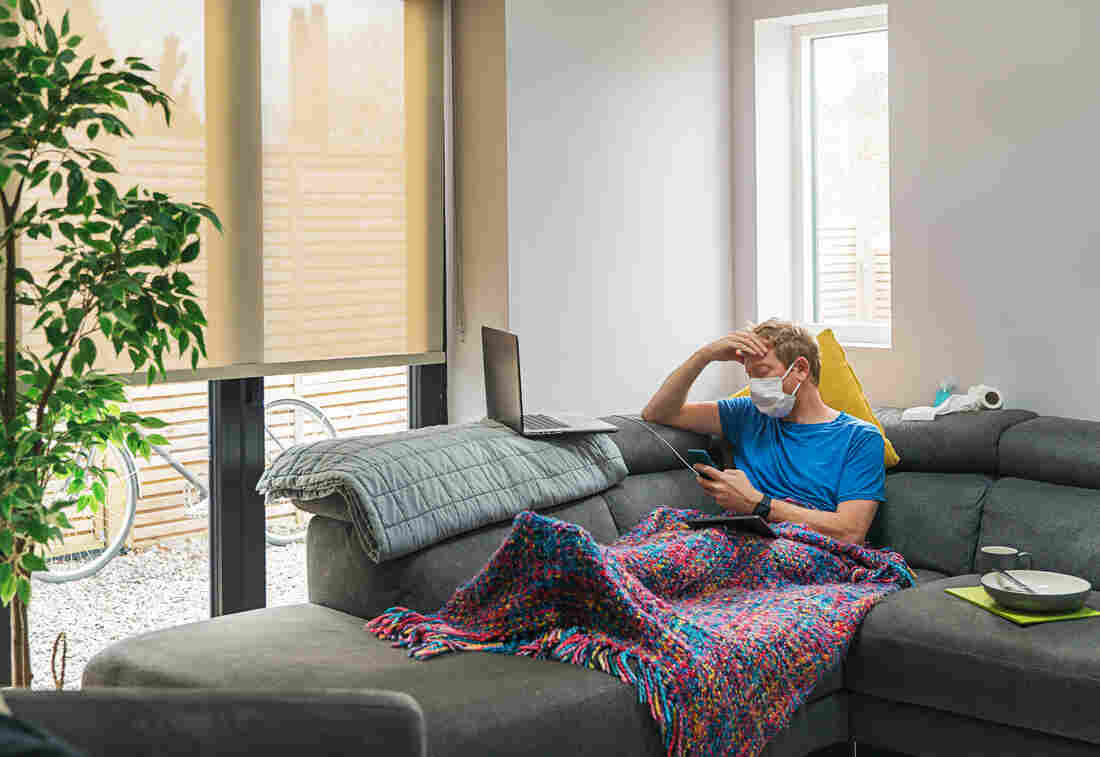 COVID-19 symptoms vary person to person, as does the length of the coronavirus infection. If you're sick, use caution when deciding to leave isolation. Justin Paget/Getty Images hide caption 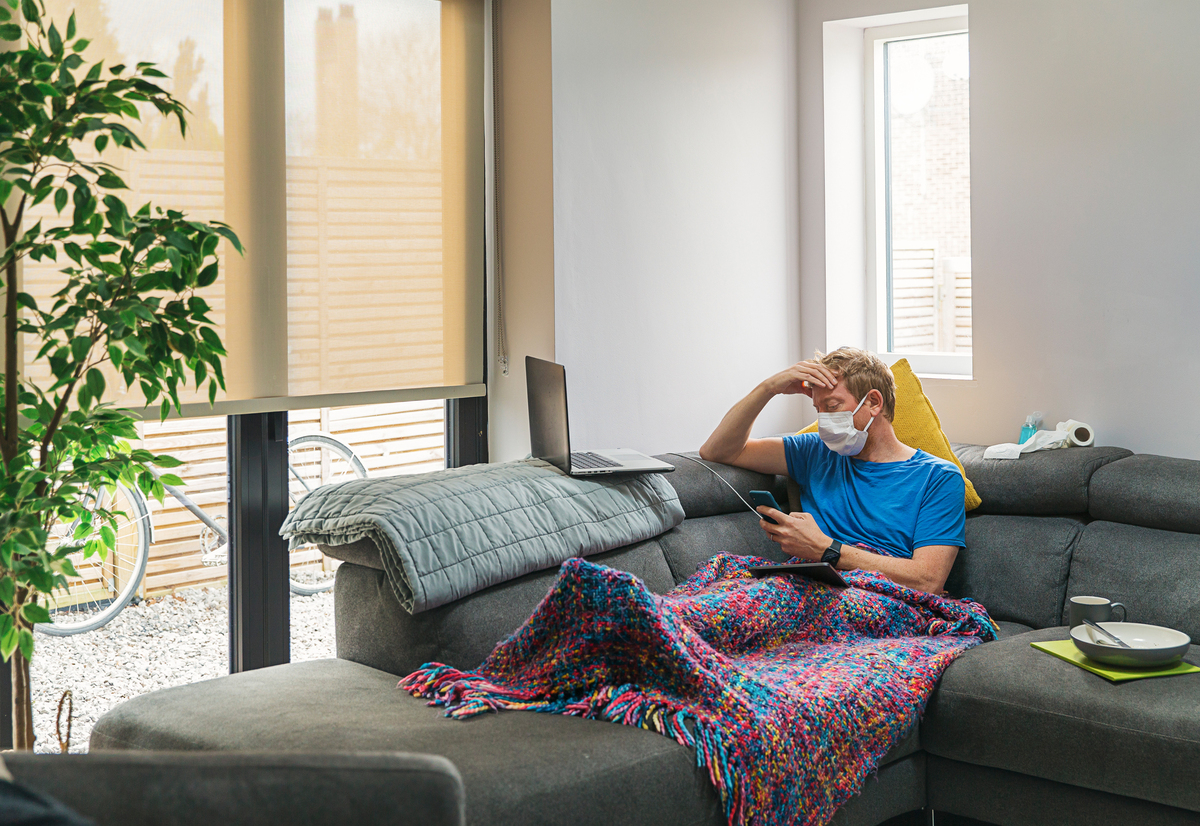 COVID-19 symptoms vary person to person, as does the length of the coronavirus infection. If you're sick, use caution when deciding to leave isolation.

Around the world, COVID-19 cases and deaths continue to grow each day. Yet, there are also more than 440,000 people globally who have recovered to date.

For those who have had the illness, recovery can be a slow journey. And even after you're feeling better, there can be a period of uncertainty. After days or weeks of isolation, you may be eager to see family again and even step foot into the outer world. But how soon is too soon? And how do you know when you're no longer infectious?

For answers, we've turned to several experts, including two doctors who both got diagnosed with COVID-19 in mid-March and have since recovered. Rosny Daniel, 32, an emergency department doctor at the University of California, San Francisco, is back on the job and feeling "completely back to normal." And Darren Klugman, 45, a pediatric cardiologist, says he's feeling "100%" and is also back to work after isolating himself away from his family.

Klugman says the news of the rising COVID-19 deaths is heartbreaking and sobering. He says it points to the critical need for pandemic planning. But he says it's almost as important to realize how many people are recovering. "The majority of people will have a mild-to-moderate flu-like illness like I had," Klugman says.

He says that it's critical for everyone to follow social distancing guidelines and that if you do suspect you may be sick — whether or not you have tested positive — take action to protect yourself and those around you. "Most important is recognizing the symptoms early, isolating oneself and really strictly abiding by the quarantine rules," Klugman says.

Am I well yet? What to watch for if you think you're getting well.

Daniel says people who get COVID-19 can have a wide range of symptoms and the severity of the sickness can range a great deal from person to person. "It's incredibly confusing, and there is a big amount of unpredictability to it," he says.

But keep an eye out if you think you're better after a few days, because you may still get worse. Daniel says for the first few days of his illness he had aches and chills. He developed a fever and a mild cough and felt wiped out, tired. "My muscles hurt really bad in my legs. I felt really sore," he says. "[It was] painful to the point that they felt like they were tingling."

He started to feel better, but then, on day seven, the symptoms came back and he started to also have trouble breathing.

He has mild asthma and Type 1 diabetes, two underlying conditions linked to an increased risk of serious illness. He began using his inhalers to treat the asthma. He also took an antibiotic to treat what may have been a secondary bacterial infection in his lung. After several days, he felt much better.

Klugman says he felt sick for about 10 days. At first he had "intermittent chills and body aches," and then he developed a low fever and a "very prominent cough." Based on these symptoms, he quarantined himself away from his family for 14 days, before he even got the positive COVID-19 test results.

"By day 10, I was feeling my energy level was near normal," Klugman says, but he says his cough persisted for a while longer. Now, he says, he's completely recovered and even back to going running.

As a doctor, Daniel says, he's really eager to see more testing and better data on COVID-19: "Right now it feels a little bit like we are fighting with a blindfold on. We're trying to get as much information as possible."

What are the guidelines for when you can stop isolating yourself after you've been sick?

The Centers for Disease Control and Prevention issued guidance saying people with COVID-19 can stop isolating themselves when they've been fever free for 72 hours — that's three days after the fever ends. And to note: That is without the use of fever-reducing medicine. This should accompany an improvement in respiratory symptoms, such as coughing and shortness of breath, and should be at least seven days from the onset of initial symptoms.

The CDC says testing can also inform the decision. But the test-based strategy that the CDC suggests involves getting negative results on two tests, with samples collected at least 24 hours apart. Given the difficulties with testing, that may not be realistic for most people right now.

After self-isolation, recovered patients who are returning to work and public spaces should still follow the mitigation recommendations for everyone, such as avoiding groups and washing hands. Right now, most people are under stay-at-home orders, so trips outside may be limited anyway.

For health care workers, some institutions have put in place additional guidance building on the CDC's.

Daniel was off work for nearly three weeks. His hospital used a specific process to clear him back to work. "The guideline we're using is 14 days past initial symptoms, plus 72 hours of no symptoms," Daniel told us.

It's worth noting that the CDC says this is all based on limited information — so this guidance could change as it learns more.

Given that some people's symptoms reoccur at day seven, as Daniel's did, he says there's reason to be cautious. To be conservative, you might want to wait a couple of extra days before leaving self-isolation, in case you regress.

What does the science say about how long people may stay contagious after they've recovered?

It's not fully known how long a person with COVID-19 is infectious. "A rough guide for other infections is that infectiousness drops when the fever subsides," says Ben Cowling, a professor of public health at the University of Hong Kong.

Aaron Carroll, a professor of medicine at Indiana University, says there's still some uncertainty. "We still don't have enough data to really know how long people are infectious," he says.

And he says some doctors are concerned about the CDC's guidelines. "I will tell you that I think a lot of people I know are uncomfortable with that guidance. They think that it may not be as conservative as it needs to be," Carroll says.

Cowling says studies are underway to evaluate how long the body continues to shed the virus after someone starts to get better. But, he adds, there is not a direct link between shedding and infectiousness.

One meta-study looking at over 100 cases found RNA from the virus in stool samples up to 33 days after onset of the illness, even after the patients had tested negative using samples from their respiratory tracts. But the researchers noted that they didn't know if these were only RNA fragments or active virus particles that could infect someone.

I feel well and back to normal. When can I see my older family members again?

A lot of people who feel better would like to reconnect with family members — perhaps with elderly parents. But that's not safe yet, says Sean Morrison, a geriatrician and palliative care specialist at the Mount Sinai Health System.

Older people are more vulnerable to COVID-19, and 8 out of 10 deaths reported in the U.S. have been among adults who were at least 65 years old, according to the CDC.

"What I strongly recommend is that in-person visits to older family members remain only if needed and, at that, infrequent," Morrison says. To provide things like groceries and medications, some visits may be necessary, but they should be limited as much as possible. "Particularly for older adults, the strong isolation and physical distancing required is really hard," he adds. "And yet it is what is going to get us through this."

Will I be immune to reinfection after I've had COVID-19, or could I get it again?

The CDC says the full immune response, including duration of immunity, is not yet fully understood. So, there's some uncertainty.

"I hope that my antibodies are all ramped up and I'm protected from getting sick again, but I don't know that for sure," Daniel says. "So I'm treating it as if I don't have immunity, and I wear full protection at all times, by our hospital's guidelines, to make sure I'm still protecting myself."

So far, there's almost no data, and no long-term data, on the virus that causes COVID-19 (called SARS-CoV-2), so it's speculative to say how long immunity may last after being infected.

"Based on immunity to SARS [and] MERS, and seasonal coronaviruses, a reasonable expectation is that most, and maybe nearly all, people who have been infected with SARS-CoV-2 will have immunity for a year or more," says Marc Lipsitch, an epidemiologist at the Harvard T.H. Chan School of Public Health. This immunity will likely protect people "at least against severe disease and against shedding a lot of virus that would make them highly contagious," Lipsitch says.

He says this best guess is informed by what scientists documented in the blood of people who had recovered from SARS and MERS, which also are caused by coronaviruses. Lipsitch says these studies suggest that the people's defenses against the viruses seemed to last a while, about two years for SARS and, for MERS, nearly three years.

Lipsitch says more research is needed to determine how long people are protected after COVID-19. "We need to design studies where individuals with known COVID-19 infection and without infection are followed over time to assess whether the first group is protected, or partially protected, against COVID-19 infection compared to the second group," Lipsitch says. He says these studies are challenging to design, but he and some colleagues are currently trying to do so.

An earlier version of this story misspelled Marc Lipsitch's first name as Mark.