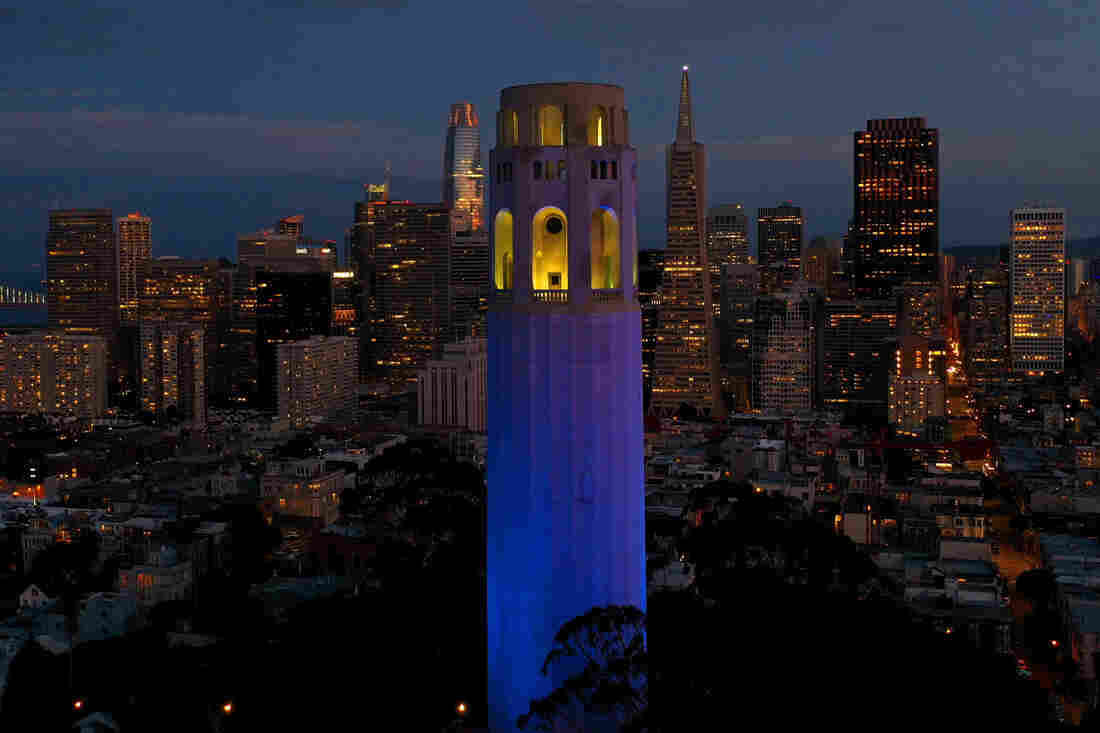 San Francisco's Coit Tower was lit up blue on April 9 as part of a nationwide tribute to health care workers and first responders on the front lines of the COVID-19 pandemic. Justin Sullivan/Getty Images hide caption 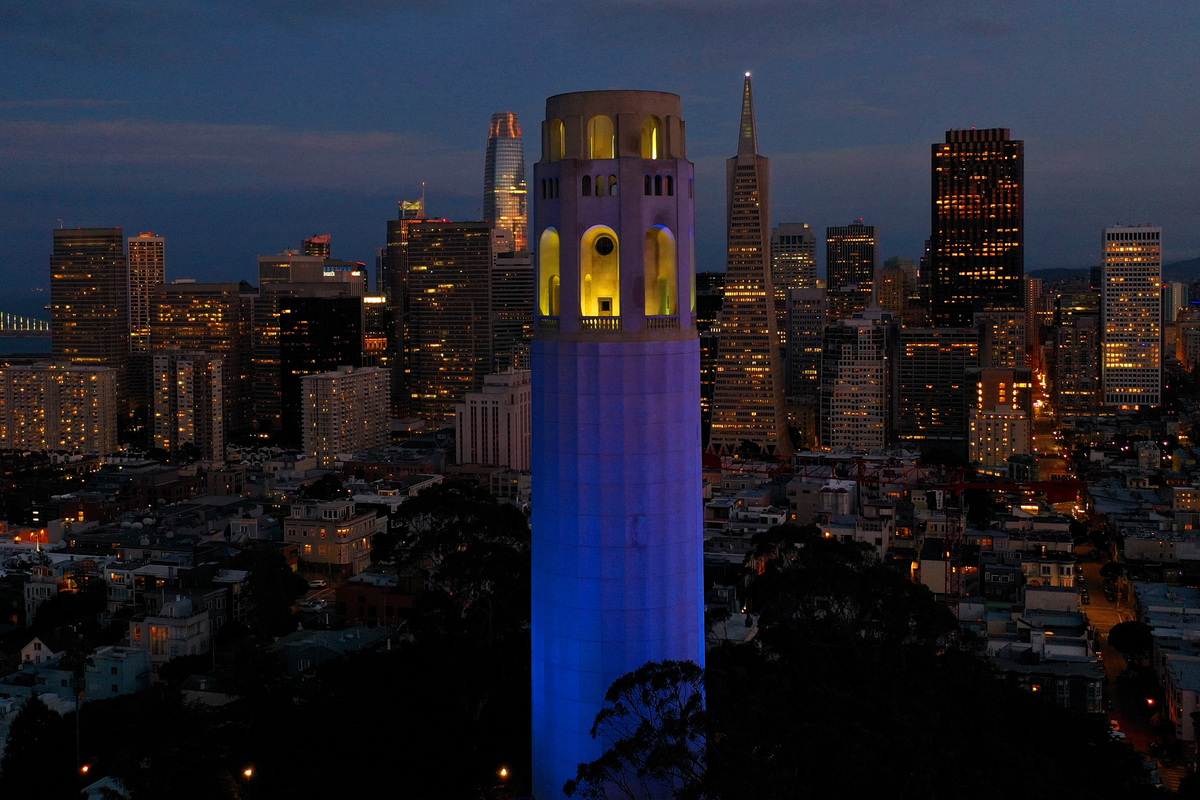 San Francisco's Coit Tower was lit up blue on April 9 as part of a nationwide tribute to health care workers and first responders on the front lines of the COVID-19 pandemic.

Just a month after San Francisco became the first city in the nation to order residents to stay home to stop the spread of COVID-19, the city has launched an ambitious new effort to try to warn residents who may have been exposed to the coronavirus. The city's goal: Get them all tested and convince them to self-quarantine at home for 14 days.

As testing becomes more widespread, the effort to trace the contacts of those who have tested positive is seen by public health experts as the next vital step in trying to control the pandemic and move beyond the shelter-in-place edicts that have shut down most of the nation's economic and social life. So far, according to San Francisco's website, the city's reporting only a little more than 9,000 completed tests for the coronavirus.

"We need this contact-tracing program in place so that we're equipped to respond to new cases and keep the virus from spreading out of control," Mayor London Breed says.

"Without contact tracing, there's always a risk that we won't be able to contain further outbreaks," says Dr. Mike Reid, and assistant professor in infectious disease at the University of California, San Francisco, who is heading up San Francisco's contact-tracing effort in close cooperation with the city's Department of Public Health. The company Dimagi is also providing contact-tracing software that allows staff making the calls to work remotely and send simple text messages.

Because of concerns about privacy and civil liberties, the city's new effort does not involve a smartphone tracking app, though Taiwan and South Korea have used that approach effectively. It also, as yet, will not use the contact-tracing app system Apple and Google are jointly creating that uses Bluetooth signals to identify contacts that other methods may miss.

"End-user apps will never obviate the need for a robust public health response," Reid says. "Making phone calls, while old fashioned, is the best way to do what we have to do."

San Francisco's approach centers on that traditional, relatively low-tech approach: an in-depth, voluntary phone interview with a COVID-19-positive patient about their recent interactions with friends, neighbors and colleagues.

Next, without revealing the infected person's identity, public health workers call that list of people they've been in contact with and conduct an in-depth interview, asking all these people to self-quarantine for 14 days. That's followed by daily texts or calls to each of those contacts to track their health and wellness throughout the two-week monitoring period.

A public health professional will get on the phone with the person who has tested positive for the coronavirus to ask: When did you develop any symptoms or fall ill? After you fell ill, who did you spend time with? What did you do? What restaurants did you go to? Were you at school?

"You know," Reid says, "all of those kinds of daily activities of life where there may have been a risk of onward transmission." The calls often last an hour or longer, he says.

Next, now that the city's expanded contact-tracing capabilities are up and running, Reid says, the tracing team — which includes trained San Francisco librarians, staff in the city attorney's office and UCSF medical students, among others — will reach out to the person's contacts, "and let them know, 'Hey, you've been in contact with somebody that was suffering from COVID-19. We know that there's a risk that you could develop symptoms of COVID, given your close proximity to that individual, and we would like you to stay at home to quarantine for 14-day period.' "

In a written statement announcing the program, the city says all conversations are voluntary, confidential "and culturally and linguistically appropriate. Immigration status will have no bearing on these conversations."

San Francisco currently has 40 people making these contact-tracing calls. By Thursday, another 70 people — including those non-medical staff — will have gone through extensive training by UCSF and the health department and start reaching out to the contacts of someone who's tested positive. Once the shelter-in-place order begins to be eased, Reid says, the city will need up to 150 people or more to work phones.

Eventually, health officials say, the nation's most populous state will need many thousands of trained volunteers and professionals to expand contact tracing statewide.

"It will be thousands of individuals," Gov. Gavin Newsom recently said of the state's plan, "working with AmeriCorps, working with Cal Volunteers." Newsom notes that the state already has done contact tracing during previous public health emergencies, such as measles and tuberculosis outbreaks, but not on the scale needed for COVID-19.

"We have an infrastructure, a foundation that's already in place," Newsom says, "and now we're just amplifying that and building on that."

In addition, San Francisco will have to significantly ramp up testing if it wants to expand contact tracing. The city still has a major backlog of results yet to be processed.

And right now, the recommendation of self-quarantine for those who have tested positive for the virus and for those they've been in direct contact with is largely that — just a strong suggestion. But the suggestion may soon have the force of law.

Sources tell NPR that the city attorney's office is working on legal language that will, in theory, help enforce a 14-day stay-at-home order for patients who test positive for COVID-19 and their close contacts. A spokeswoman for the mayor says only that officials are "in discussions" about that possibility.

City officials say they may, in the future, tap into other sources of data to help expand the precision of contact tracing. But right now San Francisco is relying on community trust and phone calls to voluntarily and accurately characterize where the infection may already have spread.

"Everybody wants to help," Reid says. "They recognize that in order for us as a community to get a handle on the epidemic, we all have to play our role."