Accessibility links
Next Generation Of COVID-19 Virus Tests Could Get Faster And Cheaper With CRISPR : Shots - Health News Researchers are racing to develop quick, home-based tests for the virus that could deliver test results in minutes. None do that yet, but several under development hold promise, scientists say. 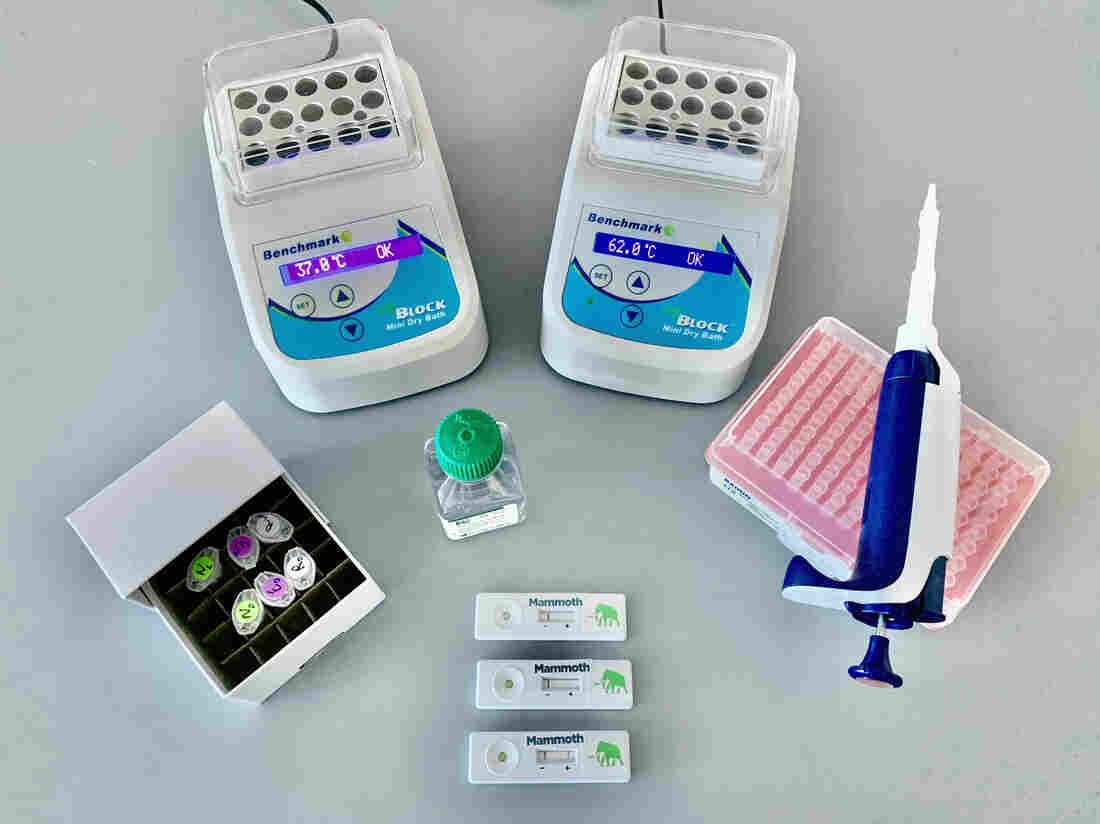 Mammoth Biosciences and researchers at the University of California, San Francisco are working on a coronavirus test that could run multiple samples at once, with results in 35-40 minutes. Even better, they say, it doesn't require the sophisticated, expensive equipment used in other tests for the virus. Mammoth Biosciences hide caption 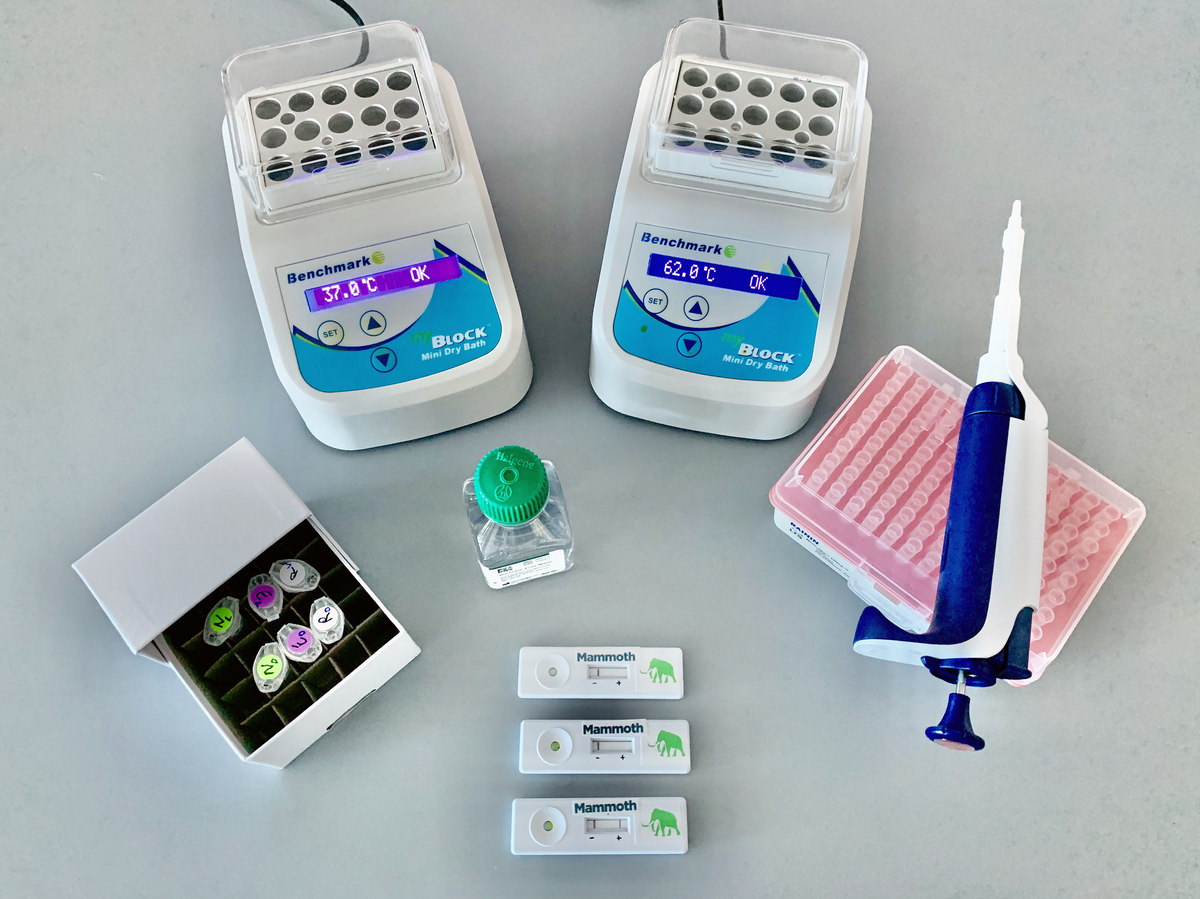 Mammoth Biosciences and researchers at the University of California, San Francisco are working on a coronavirus test that could run multiple samples at once, with results in 35-40 minutes. Even better, they say, it doesn't require the sophisticated, expensive equipment used in other tests for the virus.

Being able to test for coronavirus infections is a critical component to reopening society — even a little bit — after the initial wave of COVID-19. So there is an urgent need for faster, cheaper tests than the ones available at present.

One approach to the next generation of tests is being developed by the University of California, San Francisco Medical School and Mammoth Biosciences. In a paper released Thursday in the journal Nature Biotechnology, researchers describe a test based on a new technology known as CRISPR.

CRISPR systems have been widely used by researchers to modify the genetic material in living cells. In this case, a system known as CRISPR-Cas12 is used to recognize genetic signatures of the coronavirus that causes COVID-19 and then make cuts in it to release a fluorescent molecule that will show whether the virus is present.

Like the test developed by the Centers for Disease Control and Prevention, this CRISPR-based test can run multiple samples at once. And while the CDC version delivers answers in hours, the test from UCSF and Mammoth Biosciences is faster — providing results in 30-45 minutes.

The test is self-contained, so it doesn't require sophisticated, expensive equipment that is used in other tests for the virus.

"I can run it now myself at home," explains Dr. Charles Chiu, professor of laboratory medicine at UCSF and co-lead developer of the new test — although he notes it does require some expertise to conduct it. He says he and his colleagues hope to submit the current version of their test next week for FDA approval. But it probably won't be the final iteration.

"What we really want to develop is something like a handheld, pocket-sized device using disposable cartridges," says Chiu — something that could even be used by nonexperts as a home-based test. Chiu is confident such tests could be manufactured at a scale that would be widely available.

Other labs, including two at the Broad Institute in Cambridge, Mass., are also working on CRISPR-based diagnostic tests.

Sara Sawyer, a virologist at the University of Colorado, is trying to go one step further in the testing world. She's trying to develop a low-cost test people could use at home that would reveal whether they are infected — days before they show any symptoms.

"For two years, we've been working on trying to develop a diagnostic that can pick up on the earliest stages of common respiratory diseases," Sawyer says. Her test doesn't look for the virus itself. Instead, it looks for a response to the virus by the cells of a person who is infected.

The idea is that once cells in the nose and throat are infected, certain genes are switched on that aren't normally switched on. Sawyer says it's possible to detect those "up-regulated" genes in saliva — instead of the nasal swab other coronavirus tests rely on. The question is, can she distinguish the new coronavirus from other viruses. She thinks she can.

But do others agree?

"The answer is maybe," says Benjamin tenOever, a virologist at the Icahn School of Medicine at Mount Sinai in New York City. He says yes, infection by the virus that causes COVID-19 results in different genes being up-regulated, compared with flu or other viruses. He's just skeptical the technology exists to be able to detect those differences.

"I'd say theoretically it is possible," tenOever says. "She's a very smart scientist. And so if she says she can do it, I would give her the benefit of the doubt."

Sawyer has formed a company to build her test kit. If society is to reopen, she says, there will have to be easy ways for people to check their infection status. She's in the process of designing and raising money for a study to validate her test's accuracy.

"We think saliva is the key to moving these tests out of the doctor's office," Sawyer says, because all people would have to do to collect a sample is spit in a cup. No blood draws, no nasal swabs. Easy.