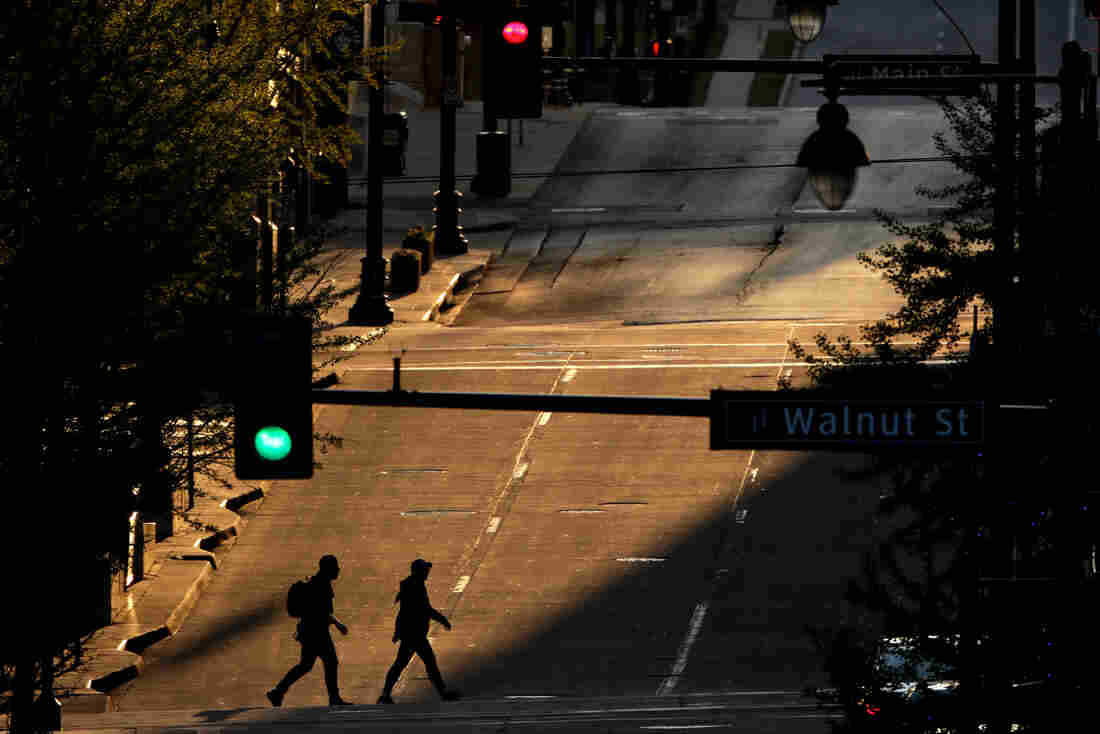 People cross an empty downtown Kansas City, Mo., street on Wednesday while stay-at-home orders continue in the state and much of the rest of the United States as part of an effort to curb the spread of the new coronavirus. Charlie Riedel/AP hide caption 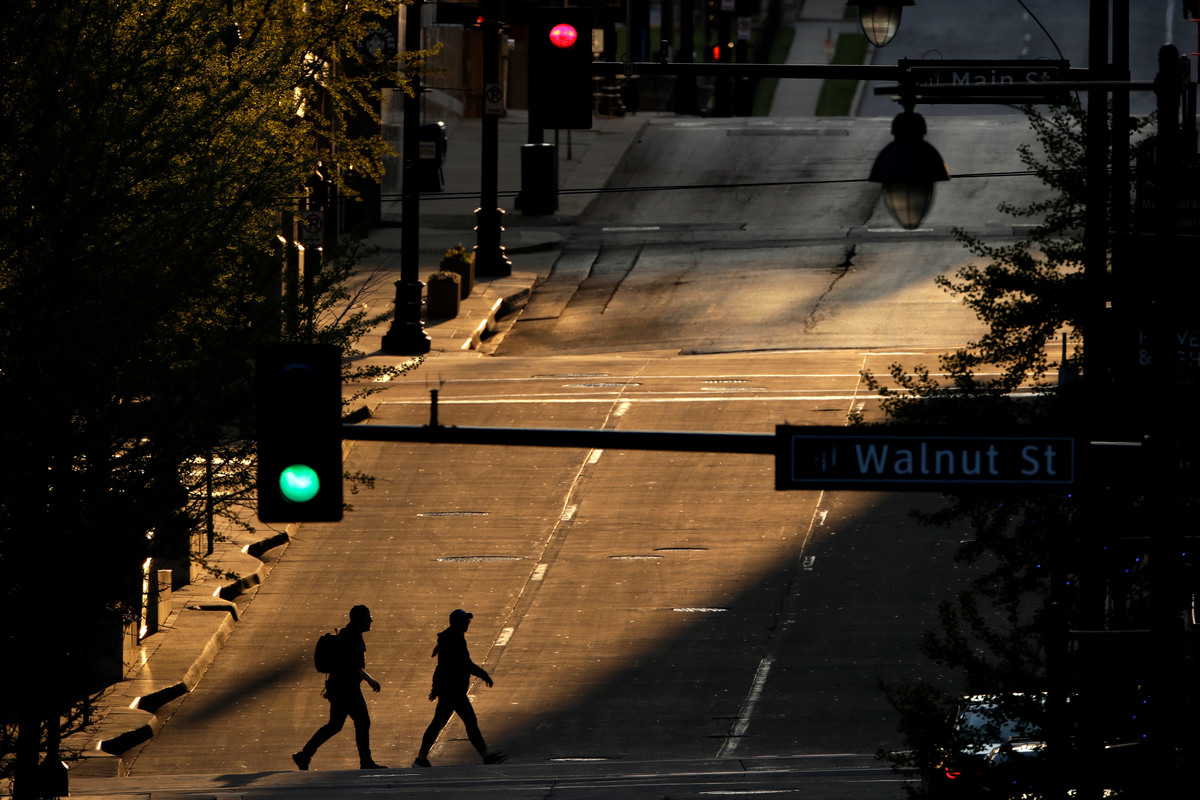 People cross an empty downtown Kansas City, Mo., street on Wednesday while stay-at-home orders continue in the state and much of the rest of the United States as part of an effort to curb the spread of the new coronavirus.

The Trump administration announced new guidelines Thursday for states to reopen businesses and schools and relax social distancing measures, but public health experts say the plan skirts a major hurdle needed to safely get things moving: a shortage of tests for the coronavirus.

Many experts are relieved the plan didn't include deadlines or a particular date for reopening. Instead, the plan describes three phases of loosening restrictions. States can move into each successive phase after establishing certain criteria, including documenting two weeks of declining case counts.

"There are features of it I like — gated, measured approach to re-opening," Dr. Ashish Jha, director of the Harvard Global Health Institute, said in an email interview. "But they largely acknowledge that they can't fix the testing backlog and therefore, are throwing in the towel on that, and making it a state responsibility with little guidance on what is adequate testing."

Instead of requiring states to hit a certain threshold of cases, the guidelines only ask states to show a "downward trajectory." States are also instructed to use public health databases that are set up to track influenza-like symptoms. Because flu season is over in the U.S., an uptick in flu-like symptoms could be seen as an indicator of coronavirus cases.

Jha said using that system is akin to a backup plan: "Not as good and not as reliable [as adequate testing] but better than nothing."

He has another concern about the guidelines' minimalist approach to testing: "There are no targets, no goals. Nothing defined about how much testing we need or how we will achieve them. They seem to have largely given up the idea that we can even have enough testing and are relying on surrogates."

The guidelines' phased approach to reopening is smart, says Kimberly Powers, an infectious disease epidemiologist at the University of North Carolina at Chapel Hill.

"It would be a grave mistake to just open the floodgates," Powers says. "It would just undo everything we've done so far with almost complete certainty, and I think a phased approach at least gives us a chance to back up if we need to. And I expect that we will."

But many say that the "gating criteria" — the standards to be met to move to the next phase — in the guidelines are problematic.

The gating criteria of 14 days of downward trajectory of documented cases and a requirement to provide hospital care without compromising standards of care are good ones, says Dr. Thomas Inglesby, the director of the Center for Health Security at Johns Hopkins University.

"But it doesn't appear that having diagnostic testing capacity for all with COVID symptoms, or having contact tracing capacity in the state are gating criteria," he wrote in an email to NPR. He says those are listed as states' responsibilities, but it's not clear that they're mandatory. "They should be requirements for reopening," he says.

Ezekiel Emanuel, chair of the Department of Medical Ethics and Health Policy at the University of Pennsylvania, also thinks that there needs to be a firm threshold for allowing a state to enter phase one.

"We need to be close to zero new cases — like a threshold of 20 new cases per 1 million population. So a lot depends upon how robust the testing is and we have still too little testing," he told NPR in an email. "The threat of resurgence is precisely asymptomatic COVID-[positive] spreaders. We need more effort to find and track them."

And Powers wondered how steep the plan's "downward trajectory" needs to be, for a state to enter the next phase: "Is it one fewer case per day? Is that sufficient or does it need to be more than that?"

She also worries that limited testing capacity could skew the numbers that are used as gating criteria: Because of limits on how tests can be processed, "it could look like we're at a plateau when really we just can't process tests quickly enough to keep up with new cases," Powers says.

There are also concerns that the guidance for employers in the guidelines is insufficient.

Inglesby said it's not clear whether employers are supposed to do testing, isolating and contact tracing. "That is not a function that employers should be given — that is a public health function. [It] does not make sense to ask all employers to figure out how to do that well," he wrote via email.

Marc Lipsitch, an epidemiologist at Harvard, says the plan lacks guidance for how to respond to an outbreak.

"The entire plan seems to lack safeguards for what to do in a single business, in a locality, or in a state if the relaxation of social distancing results in significant transmission," he said in an email to NPR. "This is either an effort to focus on the positive (opening) or just an oversight. Either way it neglects a basic function of public health, which is to provide safeguards against epidemics."

The guidelines do say to follow complementary CDC guidance, which include some guidance for communities, schools and workplaces for how to respond to an outbreak.

Among the things listed as "core state preparedness responsibilities" is the ability to test people with symptoms for COVID-19 and do contact tracing for those who test positive, and for "sentinel surveillance sites" to screen for asymptomatic cases, including in vulnerable communities such as nursing homes.

"I'm not aware of anywhere in the country where we are able to do all of that right now," says Dr. Lynn Goldman, the dean of the Milken Institute School of Public Health at the George Washington University.

She notes that it's still difficult to acquire swabs to take the test and lab materials for analyzing it.

"In many places in the country, if you have no symptoms — even if you are a contact of a COVID-positive person — you can't get the test. And that's only because there are still these shortages. And so if that is the core state preparedness responsibility, and if you need that to move into the first phase, then I'm not sure who's actually ready to go into the first phase today."

That could be days or weeks away, she says.

"The president obviously expressed a desire to reopen the economy. But when I look at the document it makes reference to the conditions that one would have to have before this policy would even allow you to do step one," Inslee says, referencing the requirement for a 14-day downward trajectory in symptoms and cases.

"We certainly have not had that, and we've bent the curve as well as anybody or more so in the United States," Inslee says.

Powers worries that the plan leaves a lot of open questions for states and doesn't define key terms.

"It talks about 'no evidence of a rebound.' I'm not totally sure what that means. Is one more case over the baseline, is that a rebound? Is there any time period over which we can consider ourselves not having had a rebound? Things like that worried me. It could be a bumpy ride."