Accessibility links
Canceled Graduation? Missing Milestones Is Tough On Young People : Shots - Health News Stuck at home, with graduations and celebrations canceled, young people are feeling disconnected. Here's how to help them through. 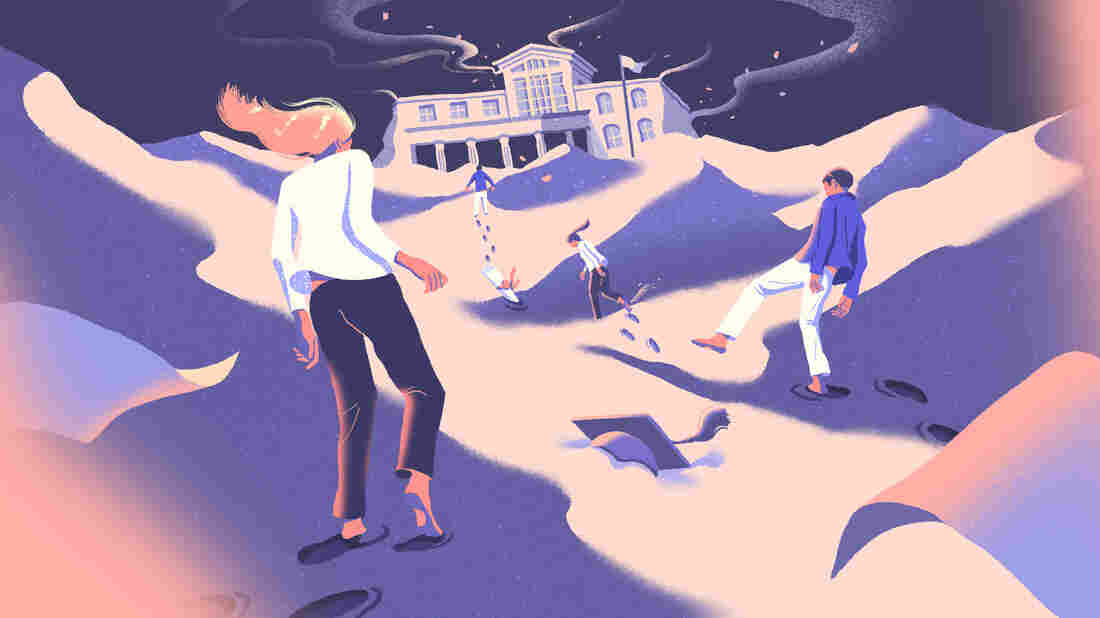 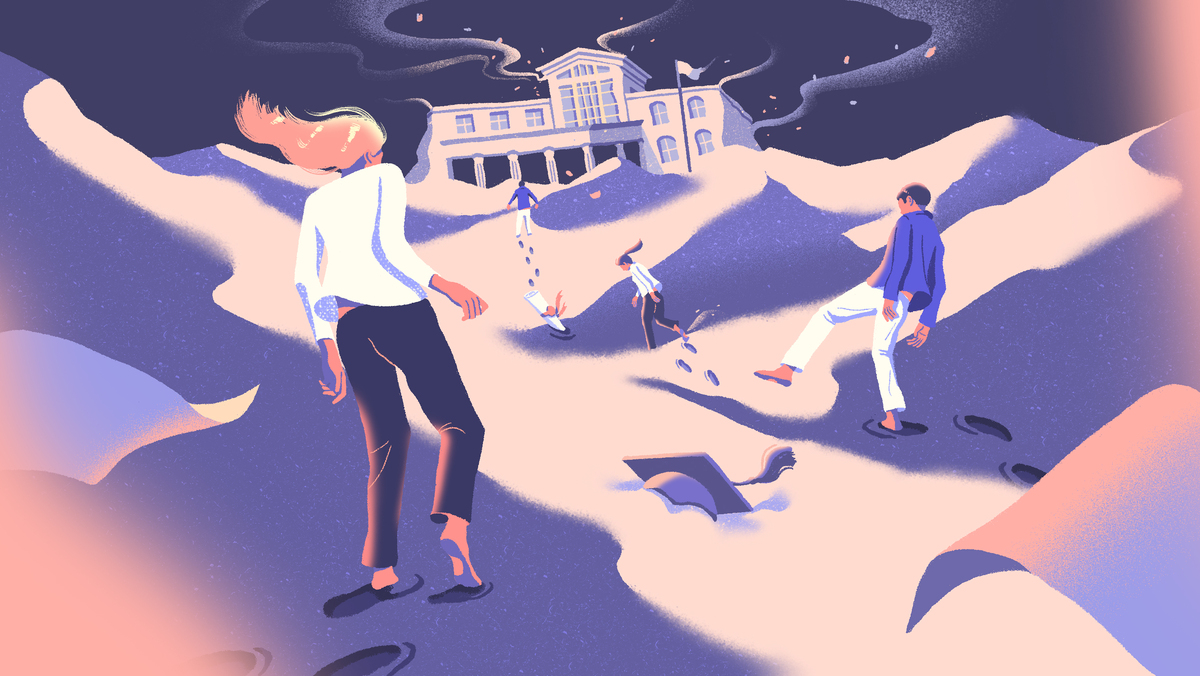 For many young people, sheltering at home means missing milestones and public recognition of their achievements. This is especially true for seniors graduating from high school and college.

Kendall Smith, a high school senior who lives in Tallahassee, Fla., says her school has many traditions leading up to graduation. But this year things are very different.

One of the most eagerly anticipated events is Grad Bash, a rite of passage when all graduating seniors head off to the Universal Studios theme park in Orlando. "It's something we've looked forward to since we were freshmen," Smith says. "And I remember hearing about all the memories and seeing them on Snapchat and Instagram, and being so excited about going with my friends."

So it was understandably disappointing when this highly anticipated event was canceled.

Smith, who plays flag football, says a big celebration for senior athletes was also canceled. "It's this huge event where people walk through the middle of the field with their parents and their family and they have flowers and you just really feel special that night," she says.

Teens are suffering from missing out on these experiences and the opportunity for connecting with their peers at critical transitions into adulthood, says Dr. Ludmila De faria, a psychiatrist with Florida State University.

She says they're "mourning the loss of important developmental milestones they were supposed to be doing at this time in their lives."

And experts advise parents to take these issues seriously and try to help kids process them.

These losses are also experienced by college students.

Waverly Hart is 21 and a senior at the College of Wooster in Ohio. One of the most memorable graduation events is I.S. Monday, short for Independent Study Monday, when seniors celebrate finishing their theses. Hart says it typically occurs on the first Monday after spring break.

"All the seniors skip classes, and there's a huge parade. And everybody on campus cheers us on and that's something that we've been looking forward to since we were admitted to Wooster. And now we won't get to experience that ... ever," Hart says.

As a competitive cross-country runner, Hart was looking forward to taking part in the last season of her college career, but that was canceled as well. "And it's really heartbreaking to know that the last race I competed in was indeed my last race ever. And I won't get another chance to compete in the black and gold Wooster uniform."

Graduation itself has been "postponed," she says, although she expects it will be officially canceled sometime soon.

As a freshman at the University of Michigan, 19-year-old Sophie Busch never expected to end up home before finishing her first year. She's proud of her freshman research project on childhood obesity and is disappointed she won't be presenting her findings at a large research symposium at the end of April. (It was canceled.)

"I was looking forward to presenting my research with the other freshmen in my lab, and I was just excited to show it to my other friends — and my parents and grandma were also going to come."

De faria, who works with student mental health, says when young people miss kinds of momentous events, "it's almost like they are forced to regress a little bit, or at least not progress as expected on their developmental milestone."

And she says, college students in particular are losing their support group during an important developmental phase. They had moved away from their families of origin, which is part of a process called individuating.

"They're finding their people, their identities and developing their ability to take care of themselves," she says. "The people they live with, their roommates in college become their primary source of support. They lost that suddenly."

This can be traumatic for a generation that "already suffers high levels of anxiety," she says. It puts them at greater risk of developing clinical anxiety and depression. Students like this may require some sort of therapeutic help from home, she says.

Many parents may be at a loss for how to reassure their children during a time of such great uncertainty, which could make things even harder on teens and young adults.

"It's unprecedented for all of us, but it's completely new for teens and young adults — and they don't have the wealth of experiences that older individuals have with transitions," says psychologist Lynn Bufka, spokesperson for the American Psychological Association. "They're trying to figure out how to do transitions and manage change within an environment where everything seems upside-down for them."

Bufka says she's hearing from young people that the situation is "very new and very different and very hard for them," she says.

"That need for strong peer relationships, coupled with less experience dealing with and adapting to adversity, means you have a generation that is going to struggle more," she says.

But there are ways to help them cope. Here are a few things parents can try.

Bufka says an important way for parents to help high school and college students by simply acknowledging their feelings — the sadness and disappointment they feel about the loss of prom, celebrations and graduation.

Parents should recognize that for many young people, "this is the biggest thing they've experienced in their lives," she says. "They're too young to remember 9/11. Collectively as a generation, this is a really big experience for them."

When you're young, understanding that life is just not as predictable as they might have thought can be scary, she says. Parents can help by letting them talk about it.

Encourage them to stay connected

Young people need to establish a cushion of social connection they can lean on through these times.

Bufka says staying socially connected, even virtually, can be helpful. In fact, she prefers to describe distance precautions as physical distancing, not social distancing. "It's important to maintain social connection and intimacy even if this is not in person," she says.

And she encourages young people to take advantage of the many ways to socially connect, with all kinds of shared online activities, including group chats, dinners, TV and even movie watching.

Shift focus to what they can control

Graduation may be postponed or canceled, but young people can plan special events for after the pandemic has ended. Perhaps a trip with best friends or a post-graduation party. Focus on the positive events that can occur at the end of this crisis. Envision how you can celebrate, and maybe even start making plans now.

It can help to point out to young people that they are making sacrifices right now not just for their own health and safety, but for the greater good. She points to a study that looked at previous infectious disease crises, including the 2003 SARS and the 2014 Ebola outbreak in West Africa. People are able to cope better, she says, when they "think about the altruistic reason they're doing this."

Changes in everyday life to limit the spread of disease may be hard, but "we're in it together and we're in it to benefit the larger community and to have a good impact on overall health and wellbeing."

Florida high schooler Smith says she and her peers understand this well.

"As disappointed as we all are that we're missing out on these important milestones in our life, we do understand that this virus is killing people and that if we don't sacrifice these things that we might contribute to the problem."

She adds they wouldn't want to be "the reason that a student takes home that virus to their family, maybe a grandparent that can't fight that off, or maybe somebody with asthma that doesn't have the lungs to be able to deal with coronavirus."

"We understand these sacrifices need to be made, and we know that we are doing our part in this, doing what we can for society," she says.

In the end, Bufka says once young people get through this crisis, they will realize they can handle tough situations and get to the other side.

"It will make us stronger — sometimes we surprise ourselves."

A previous version of this story incorrectly said Waverly Hart is a high school senior. She is a college senior. Also, Disney World was incorrectly referenced instead of Universal Studios.