Accessibility links
Dialysis Equipment In Short Supply For New York COVID-19 Patients : Shots - Health News Hospital workers on the front lines in the New York metro area have been sounding the alarm about an insufficient supply of dialysis machines for patients with COVID-19-related kidney damage. 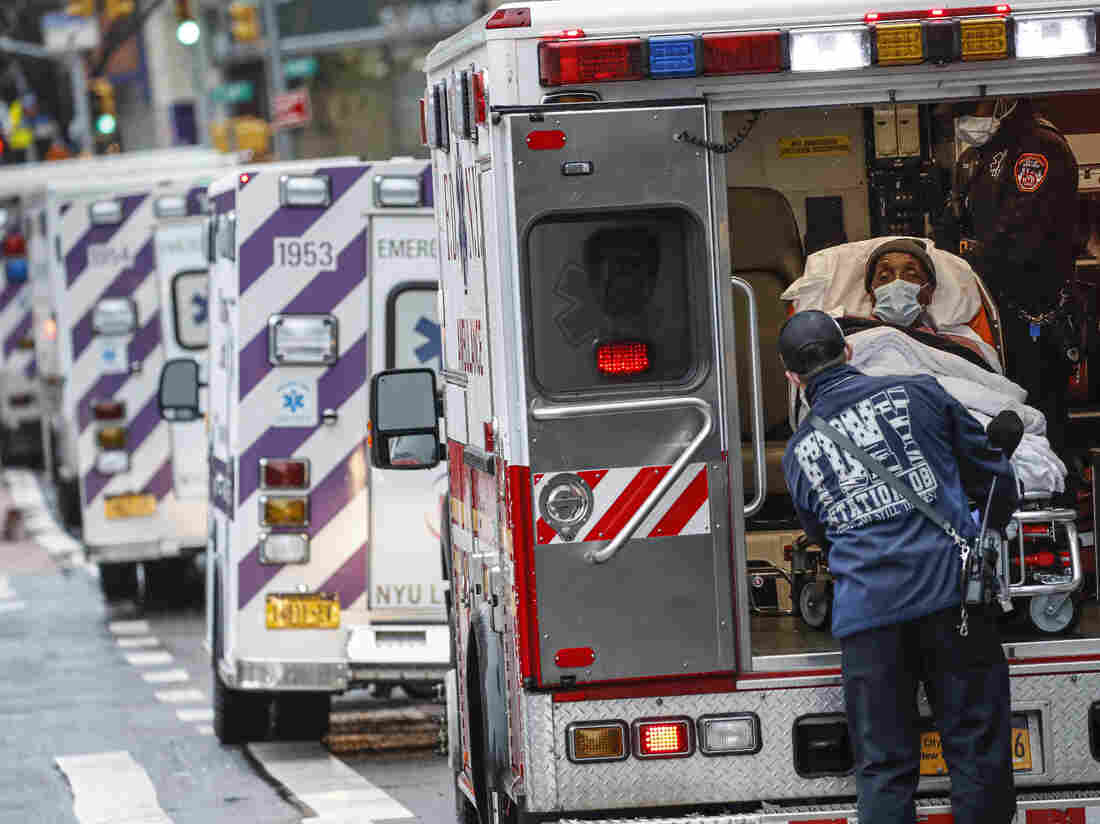 Ambulances arrive at a hospital in New York City, where concerns are rising about the supply of dialysis equipment for ICU patients. John Minchillo/AP hide caption 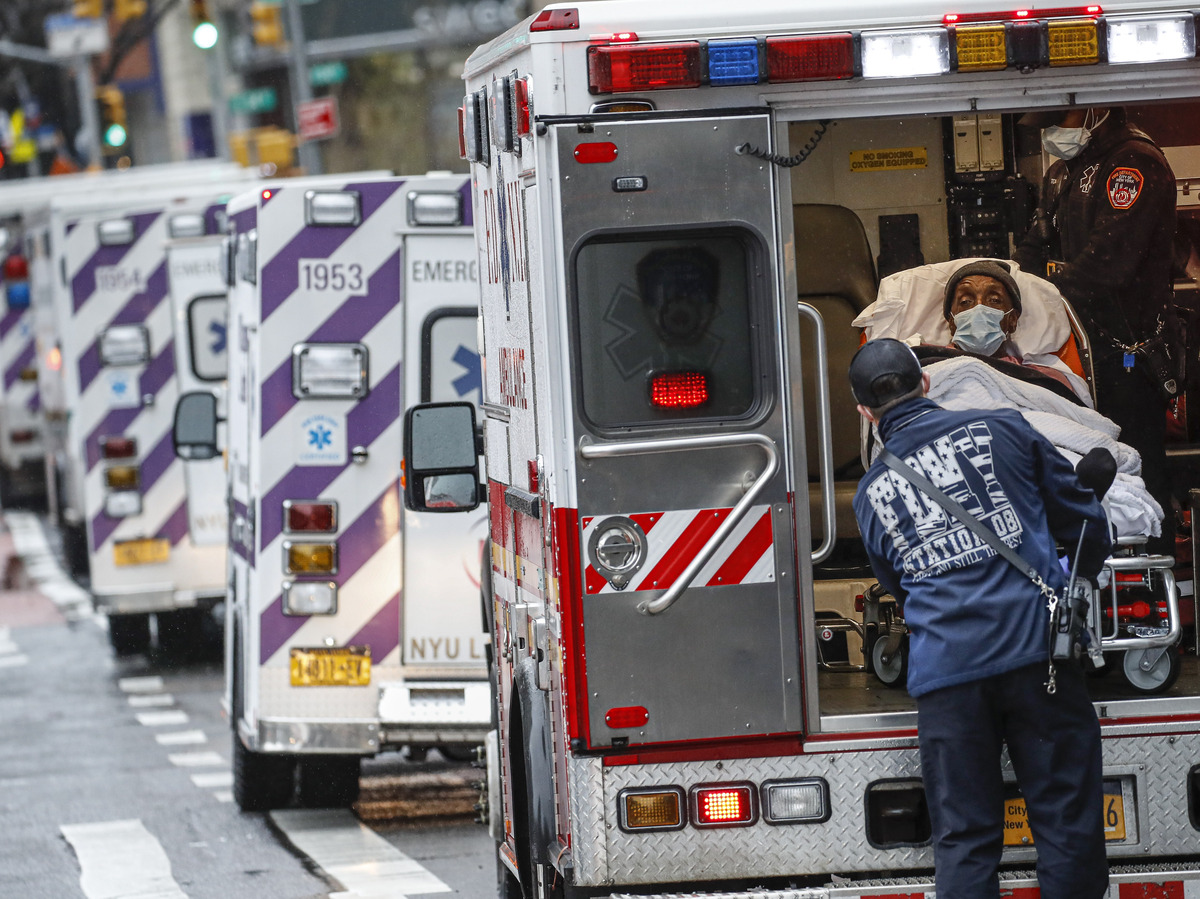 Ambulances arrive at a hospital in New York City, where concerns are rising about the supply of dialysis equipment for ICU patients.

After weeks of searching high and low for ventilators, New York Gov. Andrew Cuomo and health care leaders around the state have seen signs of improvement and are sending some of the frantically acquired units to New Jersey, where they're increasingly needed.

But now, many hospital workers on the front lines in the metro area have been sounding the alarm that a different piece of lifesaving equipment is in short supply and high demand: dialysis machines.

"We only have nine or 10 machines, and now we have over 30 patients that need them," said one physician who manages an intensive care unit in Queens but who didn't want his name used because he could be fired for speaking out. "So it becomes a question of who the resource goes to, and these are very difficult decisions."

COVID-19 sickens people – and kills some – by attacking the lungs. That's why health officials around the country have focused on finding ventilators and the people to operate them.

But ICU doctors are discovering that up to one-third of their most severely ill patients are developing acute kidney injury, a rapid decline in kidney function.

The kidney problems are being seen in patients who don't have advanced diabetes or chronic renal conditions.

No one anticipated the trend, based on research from the COVID-19 outbreaks in Asia or Europe.

"It's created a pretty substantial burden on supplies," said Dr. Steven Fishbane, head of nephrology at Northwell Health, New York's largest hospital network. "Everybody is running into shortages at this point."

Those shortages include ICU dialysis machines — which are different from the ones chronic dialysis patients use — and the unique fluids and filters needed to operate them. Most important of all is the lack of highly specialized dialysis nurses. In short supply even in the best of times, these nurses have also been hard hit by the coronavirus, leaving many of them on the sidelines.

Neither machine heals you. They only buy time while your immune system fights off pathogens.

Unlike the dialysis machines elsewhere in the hospital or in outpatient treatment centers, ICU machines operate continuously, 24 hours a day — unless there are more patients than machines. That's the situation in some New York hospitals.

"We're splitting them up, so that you'll have two patients getting dialyzed for 12 hours each, instead of around the clock," said one head of nephrology at a New York City hospital, who also won't name their institution out of fear of management reprisal. "If you need, say, 10 days of antibiotics and you have to share it so each person gets five days' worth, will they be OK? Maybe. You can't really know. But this isn't how it's intended to be used. It's called 'continuous renal replacement therapy,' and it's not continuous if you have to take people off and put them back on."

It's not clear exactly how COVID-19 damages kidneys. Dr. Benjamin Humphreys, a kidney specialist at Washington University School of Medicine in St. Louis, says the virus could be infiltrating kidneys directly, exploiting the same protein receptors they attack in the lungs. Or it could be that the higher tendency to develop blood clots among COVID-19 patients is taking its toll on the blood-vessel-rich organs.

"We don't have any other clues as to what differentiates patients that do develop kidney failure, who are infected with COVID with those that don't," Humphreys said.

The term "rationing" is triggering for political leaders, health officials and hospital executives, but the two doctors unauthorized to speak on behalf of their hospitals said they already are, in effect, rationing dialysis care.

They and other doctors and nursing supervisors in the intensive care unit are deciding together who gets a machine and who doesn't, based on who has the best chance of recovering.

Those physicians are at hospitals that serve minorities and immigrants in poor and working class communities.

Other doctors in less adverse environments say their situation isn't quite so dire — yet.

"We haven't had to ration health care at NYU, at Bellevue or the VA," said Dr. David Goldfarb, a nephrologist at all three. "We've had discussions about whether rationing was going to occur, under what circumstances it would occur, how that would go, what person or group of people would make those kinds of choices. We've read the documents that exist providing guidance on this topic. But, fortunately, we haven't quite gotten there."

When patients on ventilators aren't getting better "that leads to questions about should dialysis be provided" when their kidneys begin to fail, says Northwell Health's Fishbane. So caregivers discuss with patients and families what their values are and what the likely medical outcomes will be from dialysis.

"Often in those kind of situations, we're not really adding to the dignity at the ends of life, but rather perhaps even sustaining discomfort that isn't necessary," Fishbane said.

What he calls "thoughtful conversations" are the way things are supposed to happen. But Fishbane, who practices in a largely suburban hospital network, says his counterparts at busy urban hospitals say that process isn't possible when they're overwhelmed. Things move too fast, they say, and they don't have the time, equipment or staff to have those conversations.

"There are hospital ethics councils. There are palliative care teams," the Queens ICU chief said. "But the kidney doctors are the ones deciding who needs — who is in the worst failure at a given time. They're doing their best."

So, is lack of full-time dialysis actually killing patients in the ICU? Goldfarb says it may be a contributing factor, but it's hard to say how much.

"Lung failure and kidney failure is a really bad combination — and I'm not even confident that dialysis of any sort will change the mortality of that combination," he said. "But we want to be able to address that kidney failure with all the techniques that we have."