Accessibility links
Study Raises Questions About False Negatives From Quick COVID-19 Test : Shots - Health News New research suggests the Abbott ID NOW test, which produces results in less than 15 minutes, is the most likely among common tests to reassure people they are not infected when they really are. 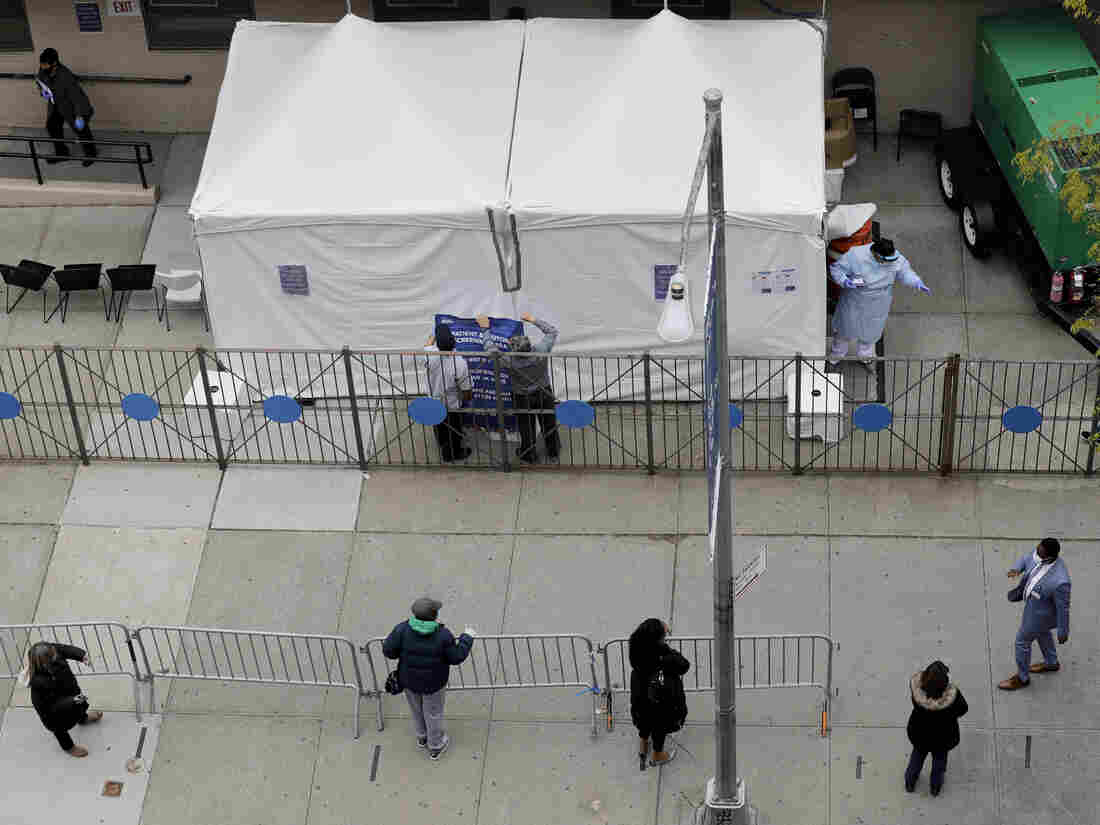 People stand in line as they wait to get tested for COVID-19 at a just-opened testing center in the Harlem section of New York on Monday. Seth Wenig/AP hide caption 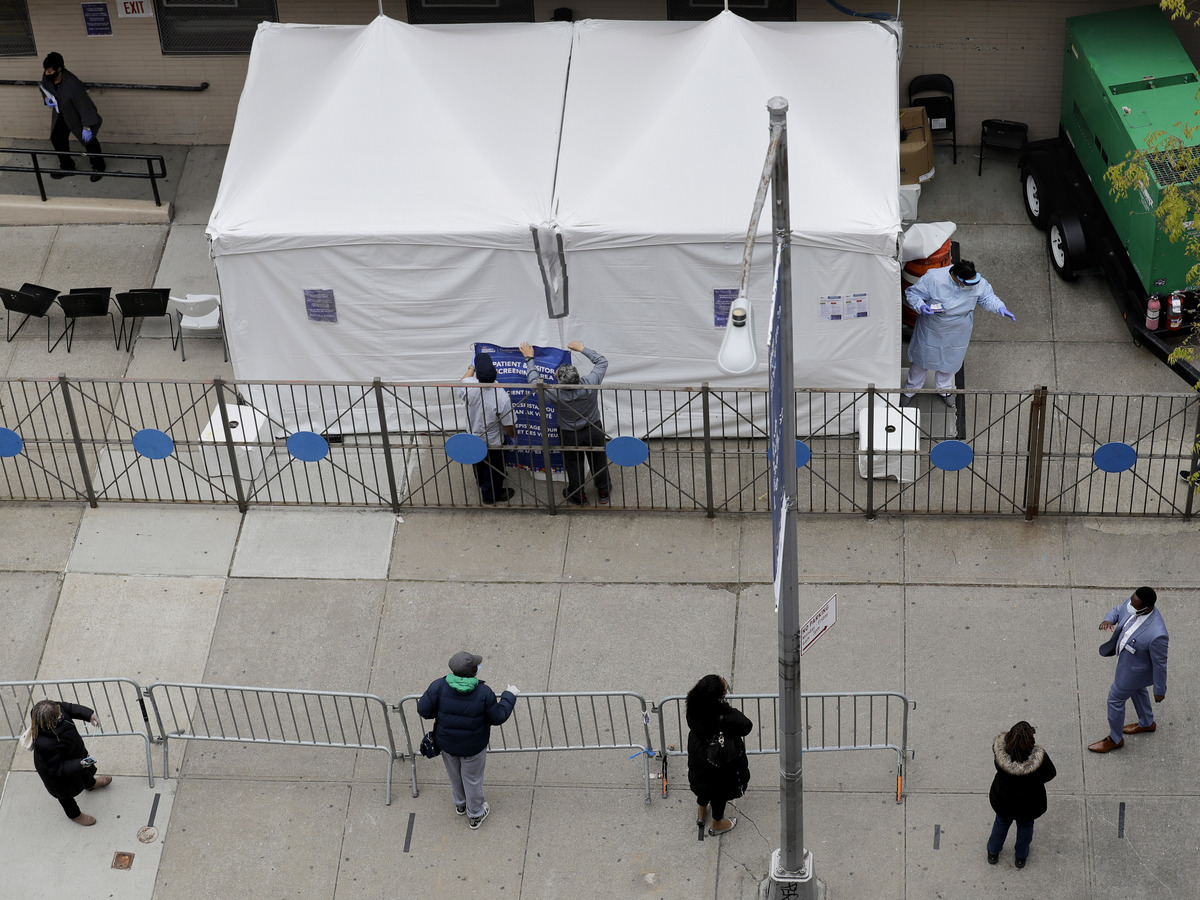 People stand in line as they wait to get tested for COVID-19 at a just-opened testing center in the Harlem section of New York on Monday.

The fastest test being used to diagnose people infected with the coronavirus appears to be the least accurate test now in common use, according to new research obtained by NPR.

Researchers at the Cleveland Clinic tested 239 specimens known to contain the coronavirus using five of the most commonly used coronavirus tests, including the Abbott ID NOW. The ID NOW has generated widespread excitement because it can produce results in less than 15 minutes.

But the ID NOW only detected the virus in 85.2% of the samples, meaning it had a false-negative rate of 14.8 percent, according to Dr. Gary Procop, who heads COVID-19 testing at the Cleveland Clinic and led the study.

"So that means if you had 100 patients that were positive, 15% of those patients would be falsely called negative. They'd be told that they're negative for COVID when they're really positive," Procop told NPR in an interview. "That's not too good."

Procop says a test should be at least 95% reliable.

Procop, who plans to publish the study soon, chairs the Commission of Science, Technology and Policy for the American Society for Clinical Pathology.

Although the paper has not yet gone through the traditional peer-review process, Procop says the findings have been carefully reviewed at his hospital and he is confident in the results.

In a statement, Abbott defended the test's reliability.

"ID NOW performs as expected and we have confidence in the performance of the test," the statement said.

Abbott said any problems with the test could stem from samples being stored in a special solution known as viral transport media before being tested, instead of being inserted directly into the ID NOW testing machine. As a result, the company recently instructed all users to only test samples put directly into the machines.

"When a direct swab is used, the test is performing as expected," according to the company statement.

Abbott did not provide a scientist to discuss Procop's study, but instead referred NPR to a doctor in private practice using the machines.

"We feel that the test is very accurate because we're using it the way it's supposed to be used" by placing samples directly into the machine, said Dr. Warren Wollin, senior medical director at Physicians Immediate Care, which operates urgent care clinics in Illinois.

"So many patients come in and have so much anxiety because they have minor symptoms. And to be able to tell them right away gives them such relief," Wollin said.

The Cleveland Clinic's Procop acknowledged that all of the samples in his study were stored in viral transport media before being tested. But Procop argues the company should back up its claim with data that this could affect the test's accuracy, especially if the test is being used in settings where people may not be aware of possible false negatives.

"They need to prove to us that they can actually deliver a sensitivity greater than 95% [if samples are placed directly in the machine], or else we'll be putting citizens at risk," Procop says.

"If you have patients coming into hospital and you're going to put them into what has been determined to be a COVID-free ward, you have to have the most sensitive test available," Procop says. "Because once you put somebody with COVID into a COVID-free ward, it's no longer a COVID-free [ward] any more. It's your new COVID ward."

The Cleveland Clinic plans to rely on other tests that performed better in the study, Procop said. That includes the test developed by the Centers for Disease Control and Prevention, which detected 100% of positive samples. Another test, made by Roche, detected 96.5% of positive samples. The fifth test in the study, made by Cepheid, detected 98.2% of infected samples, Procop said. The Cepheid test produces results in less than an hour.

Abbott is shipping 50,000 coronavirus tests every day for use on 18,000 ID NOW testing machines in doctors' offices, clinics and hospitals around the country. The company hopes to boost that to at least 2 million every month by June.

Still, Procop, like Wollin, believes the Abbott test can be useful in many settings, especially when results are needed urgently and as long as doctors advise patients about the potential false negatives. And patients, indeed everyone, still need to be counseled to continue taking precautions to avoid infecting other people, he says.

"It is a risk that if you tell somebody they're negative and they're truly positive that they will relax social distancing, not wear a face mask, etc., and could transmit the disease," Procop says.

"If you get back a negative test and think, 'I don't have it and I can go to a mixer,' " Procop says. "And now everybody at the mixer has now been exposed to you."

"A high rate of false negatives would definitely be cause for concern," says Dr. Thomas Inglesby, who runs the Center for Health Security at the Johns Hopkins School of Public Health.

"If that happens, then they wouldn't be told to isolate themselves, public health wouldn't seek out or quarantine their close contacts, doctors wouldn't know what illness they have. Their family members wouldn't know to protect themselves," Inglesby wrote in an email.

Other researchers noted that all tests can produce false-negative results, especially if the samples are not collected properly or at a time when a patient doesn't have readily detectable levels of virus in their bodies.

"All of the tests do miss a number of patients — anywhere from 5 to 30%," says Dr. Alan Wells, a professor of pathology at the University of Pittsburgh. "So this is not unique to ID NOW."

And just because someone tests negative one day, doesn't mean they might not get infected the next day.

"So regardless of whether it's ID NOW or other tests, we recognize that we cannot say with any assuredness that you are safe or not," Wells says.

But Wells added that "the ID NOW test seems not to be as effective as" other tests, based on his own research.

"The ID NOW missed roughly about half those patients," Wells told NPR in an interview.

"We do not use ID NOW to rule out a diagnosis of COVID disease, based on the limits of it not picking up as many patients as other platforms that we have," Wells said. "Our use of ID NOW is put on hold."

Wells also doubts the false-negatives are due to the specimens being diluted by being stored in fluid first.

"It's not due to the dilution," Wells said. "Our evidence is that this is not the sole cause of the lower effectiveness of the ID NOW."