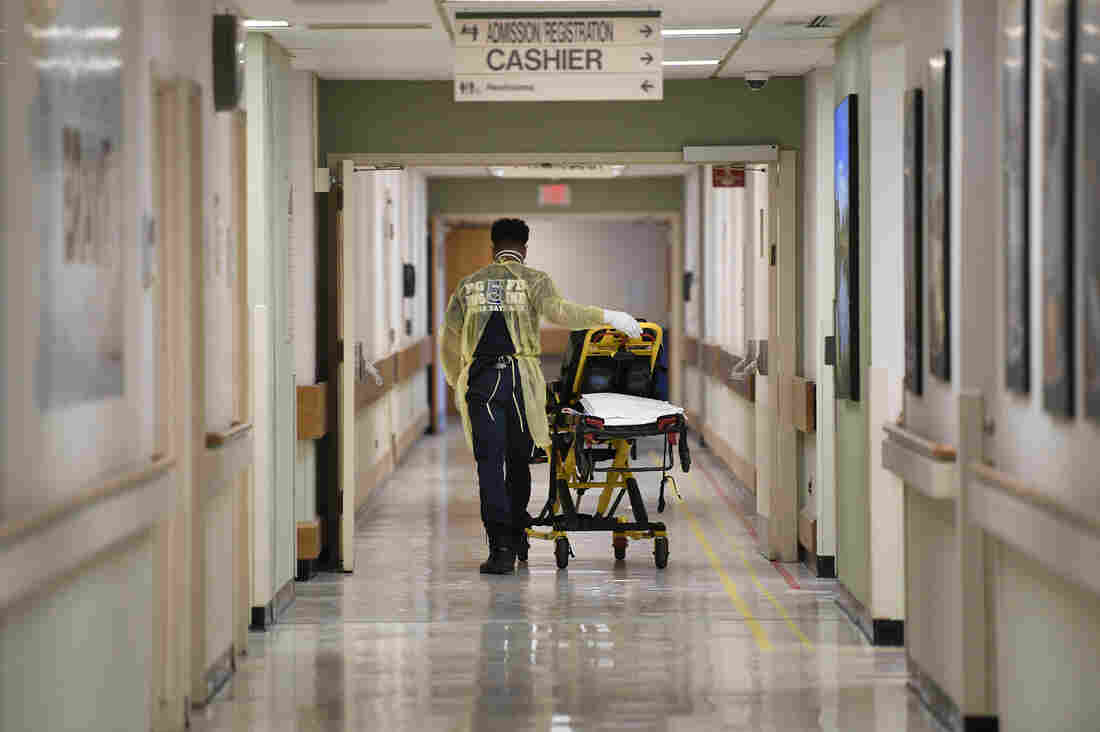 As coronavirus surges in some communities, some health care systems are overloaded. Federal estimates suggest that coronavirus cases and deaths could get a lot worse in many places without continued social distancing measures. Susan Walsh/AP hide caption 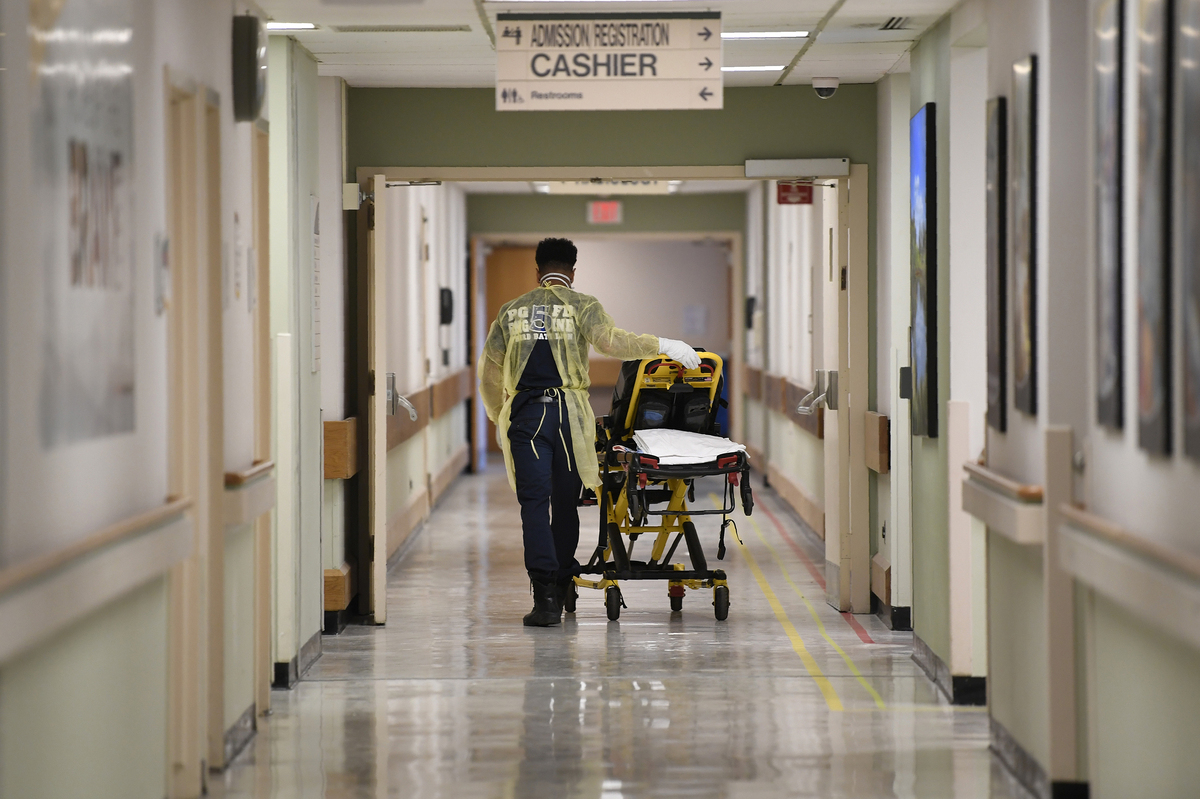 As coronavirus surges in some communities, some health care systems are overloaded. Federal estimates suggest that coronavirus cases and deaths could get a lot worse in many places without continued social distancing measures.

Federal health officials estimated in early April that more than 300,000 Americans could die from COVID-19 if all social distancing measures are abandoned, and later estimates pushed the possible death toll even higher, according to documents obtained by the Center for Public Integrity. Some outside experts say even that grim outlook may be too optimistic.

The documents, created by the Department of Health and Human Services, spell out the data and analysis the agency is sharing with other federal agencies to help shape their responses to the coronavirus.

While the White House's coronavirus task force has cited other models created at academic institutions, the federal government has not made public its own modeling efforts. The documents paint the fullest picture yet of the assumptions underpinning the government's response to the pandemic.

The Trump administration is laying out plans for how to reopen America's economy, and protesters are parading near state Capitol buildings to demand that happen swiftly. But while overestimating the threat of the virus could cause unnecessary job losses, underestimating it means more lives lost. At particular risk are the elderly and African Americans, who are already disproportionately dying, based on preliminary data.

The documents outline a possible range of scenarios for how bad the coronavirus crisis could get, without taking into account continued efforts to tamp it down. This type of model offers a baseline against which to weigh mitigation efforts. The documents say they don't aim to predict the exact course of the pandemic, but rather to help government officials plan.

"Models like this are also tools to discriminate between possible futures and guide your decisions in figuring out which you would like to avoid and how best you might avoid them," says William Hanage, a Harvard University epidemiologist who was not on the team that created the HHS documents. "We're trying to track this moving target and give people the best advice."

In the documents, the "best guess" for how things will play out without further mitigation says that coronavirus cases and deaths would double about every five and a half days; on average, one coronavirus-infected person would spread the virus to another 2.5 people; and that 0.5% of infected people who show symptoms would die.

Four of seven experts interviewed by Public Integrity said certain assumptions in the documents, such as how deadly the virus is, are too rosy.

"Their model's way too optimistic," says Ashish Jha, director of the Harvard Global Health Institute. He says the government was low-balling the fatality rate and failed to account for overruns of hospital resources. "They're getting their analysis wrong."

Some said the government's calculations were unsophisticated.

"This is just what a rookie would do," says Juan Gutiérrez, a mathematician who produces coronavirus models for the city of San Antonio. He says the government had underestimated how contagious infected people without symptoms are and that the documents begin by assuming numbers that should really instead be proven by calculations.

Others thought the assumptions in the documents were reasonable.

"What they have here now seems in the ballpark to me," says Pinar Keskinocak, who leads a team modeling the coronavirus' spread for Georgia Tech. "There are a lot of smart people over there who have a lot of modeling experience. I would be surprised if they do something that's odd."

HHS and White House officials did not respond to requests for comment.

The power of social distancing

President Trump on April 16 unveiled step-by-step guidelines for states to allow normal life to resume, including gradually reducing social distancing measures. Decisions about when and how to do that will require up-to-date scientific knowledge about how the virus spreads — the type of information outlined in the HHS documents. Several states, including Florida and Texas, already are easing some restrictions.

"Reopening the US will be a careful, data-driven, county-by-county approach," Robert Redfield, the director of the Centers for Disease Control and Prevention, said in a tweet last week.

And though many experts agree that Americans have done a better-than-expected job of social distancing and complying with stay-at-home orders to date, the HHS documents show how much more harrowing the pandemic could still be.

The road back to "normal" should be painstakingly and carefully calculated, said other public health researchers who work on modeling the epidemic.

"Please do not rush in terms of going back to normal after these shelter-in-place orders end," Keskinocak says. She advised people to stay home and quarantine if any household members are sick, even after businesses reopen.

The planning documents sketch out a "best guess" scenario and four others — two worse and two better — using 11 parameters to describe the course of the virus and six estimates to help calculate hospital beds and ventilators needed. The documents say the parameters are estimates from current best data on transmission, fatality rates, doubling times and several other factors.

Figures in one of the documents expired in early April, while a nearly identical, though updated, document says its figures are current. 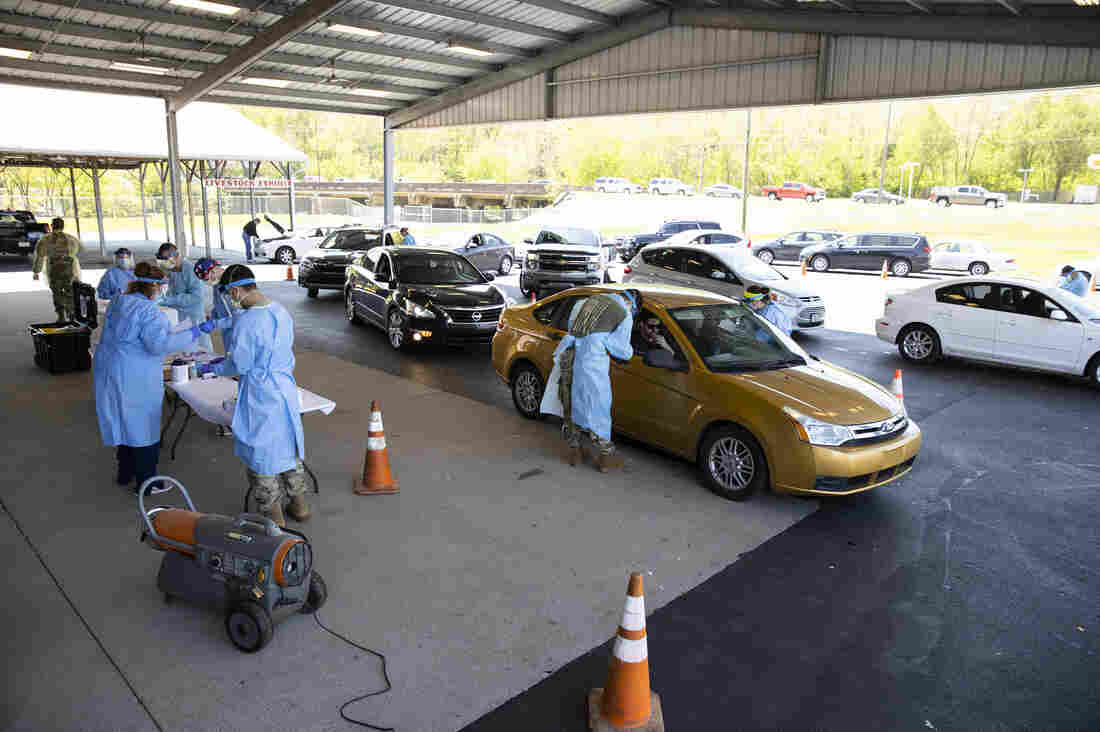 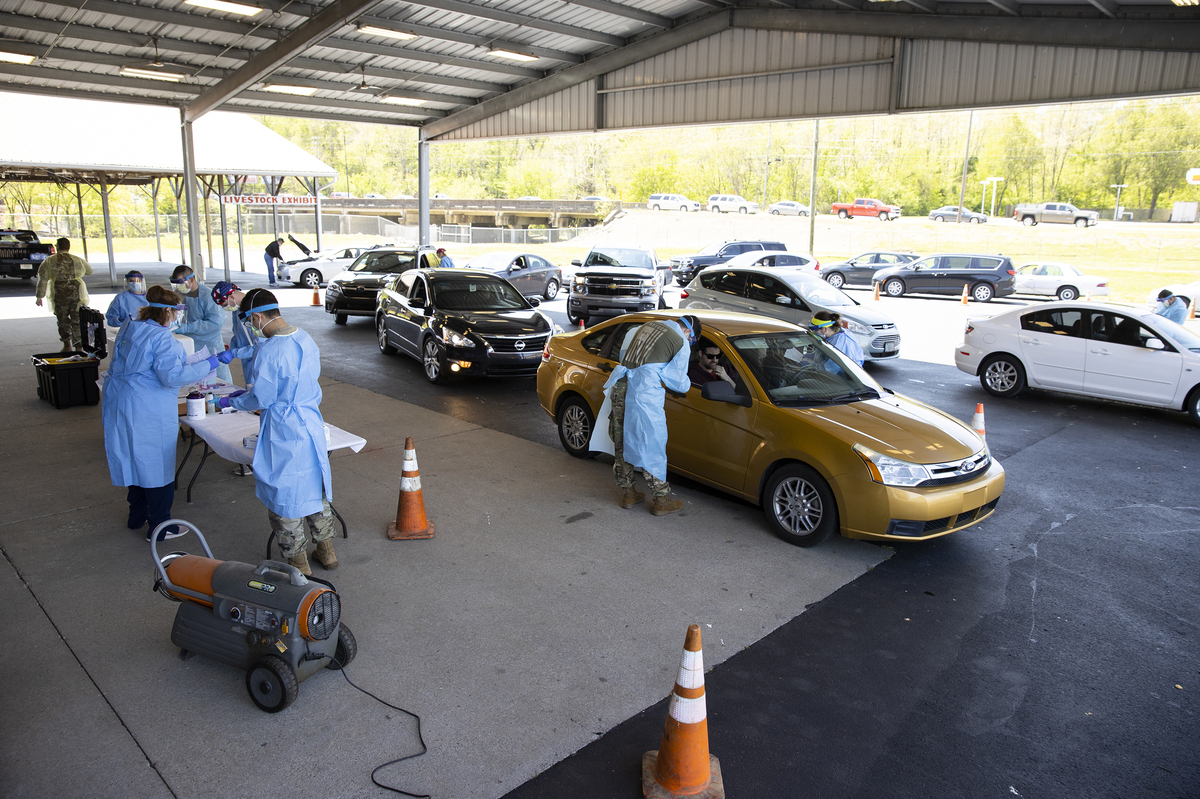 Drive-through coronavirus testing sites are growing more common as communities try to get their coronavirus transmission under control. Without continued social distancing, federal estimates suggest the virus will continue to spread widely.

A table accompanying the older planning document shows that based on HHS experts' "best guess" calculations in early April, roughly a third of Americans could be infected and show symptoms and more than 300,000 could die over the duration of the pandemic if social distancing and other mitigation measures were to stop immediately. That is far below earlier estimates of 2.2 million deaths predicted by the influential Imperial College model and the 1.5 million to 2.2 million predicted by the White House had the virus gone unchecked.

The estimated 300,000 cases without social distancing "would assume a very optimistic case fatality rate," Jha says. "That's not where the best estimates are today."

The table shows that in health officials' "best guess" scenario of a future without continued mitigation efforts, Florida, Maine, Puerto Rico, West Virginia and Vermont would fare the worst in terms of deaths per capita. Florida — which on Friday permitted some beaches to reopen if visitors don't get too close to one another — would see more than 23,000 deaths.

"We have at this moment the finger on the spring," Gutiérrez says. "If we remove the finger, the spring jumps. So we will see a lot of cases."

The number of deaths from the other four scenarios range from roughly 94,000 to 1.8 million.

The documents do not spell out how many deaths the new, higher fatality rate would lead to in the "best guess" scenario. But a simple calculation by Public Integrity shows it would be more than 600,000.

And while the changes were reasonable, experts say, certain figures still may be low.

"I'm really shocked about the underestimate of hospital parameters just because it seemed like it was so well reported in China and Italy that there were patients staying a long time," says Joseph Lewnard, an epidemiologist at the University of California, Berkeley.

'Modeling needs to happen in the open'

The early April document also used seasonal flu's impact on different age groups to suggest how the coronavirus might affect them. HHS amended that information in the more recent document, but the earlier use of the flu as a proxy for coronavirus alarmed some experts.

"Flu and COVID are different diseases," Hanage says. "I hope that statistics which are specific to COVID are used as the assumptions for these models."

The documents do not indicate the extent to which social distancing might alter the course of the virus from here on out. But a separate federal planning document obtained by Public Integrity, which used parameters similar to those in the "best guess" scenario, surmised that shelter-in-place orders would cut transmission of the virus by 75%.

Experts said government officials should publicize their coronavirus assumptions so everyone can be confident in their work.

"There are certain errors that can be made, and if no one's paying attention they go unnoticed," Gutiérrez says. "Epidemiological modeling needs to happen in the open. Usually you put a lid on the garbage."