Accessibility links
COVID-19 Crisis Highlights The Risks Of Offshoring Pharmaceutical Manufacturing : Shots - Health News Experts say it could be dangerous to rely on overseas production of medicine in a crisis, but the U.S. largely does. Rebuilding domestic capacity would take years and substantial investments. 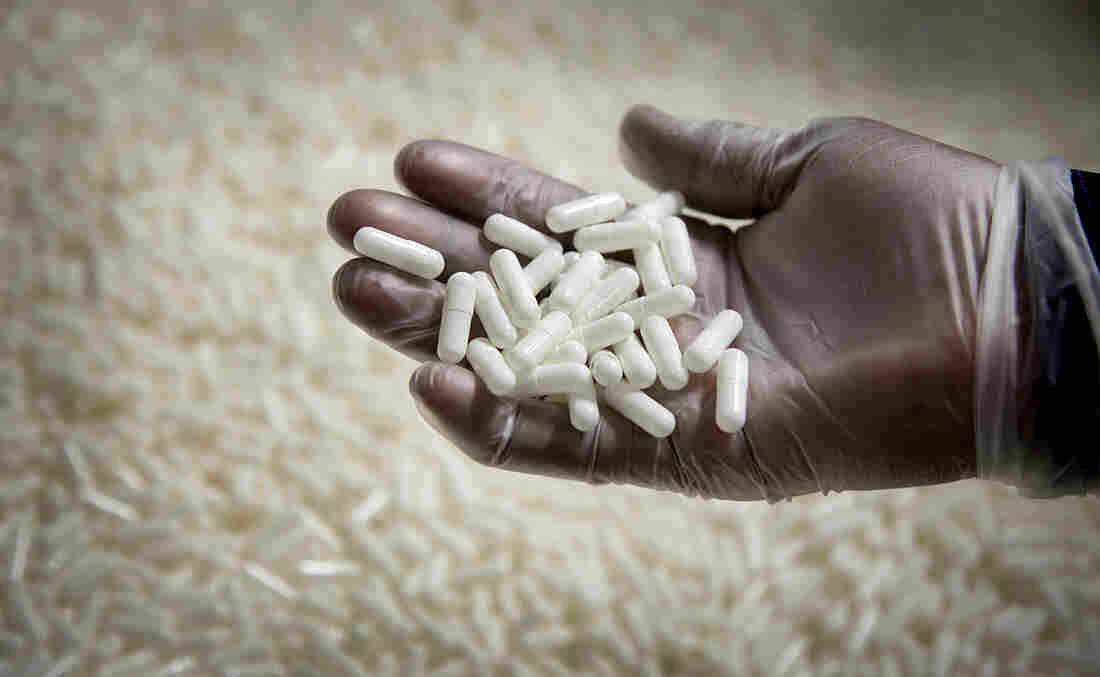 Only 28% of the factories that make active ingredients for pharmaceuticals for the domestic market are located in the U.S., according to the Food and Drug Administration. Ariana Lindquist/Bloomberg via Getty Images hide caption 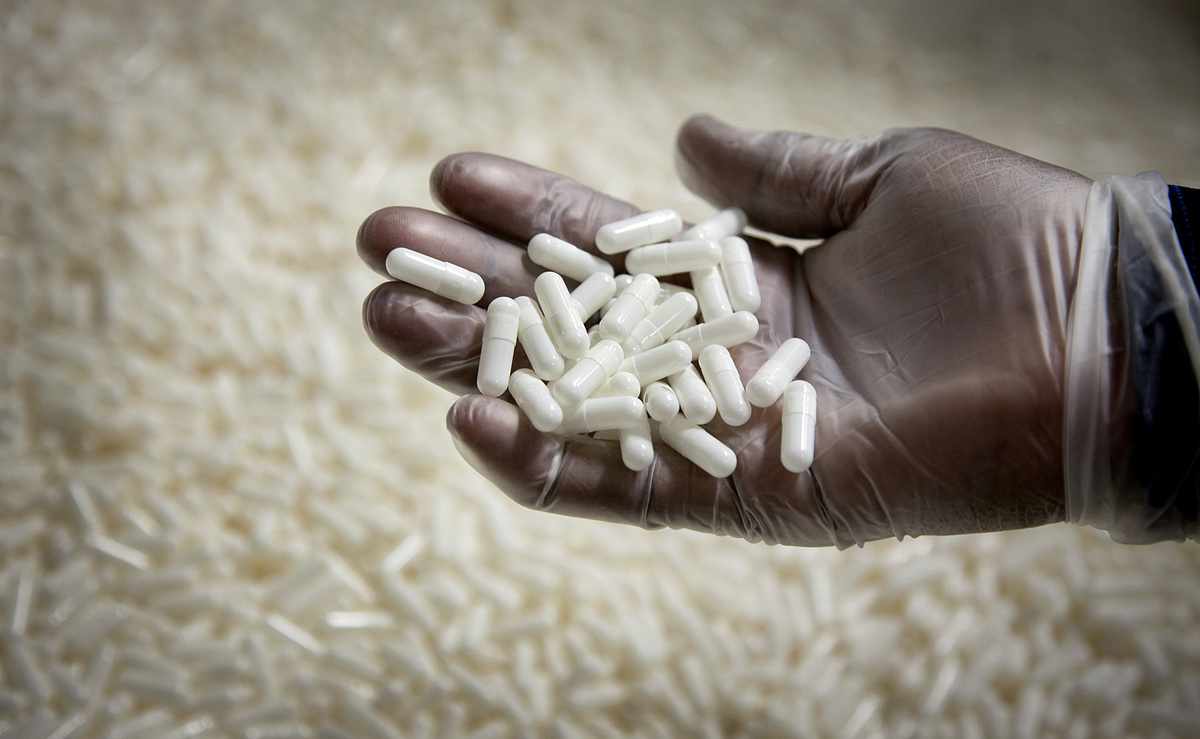 Only 28% of the factories that make active ingredients for pharmaceuticals for the domestic market are located in the U.S., according to the Food and Drug Administration.

The coronavirus pandemic has renewed concerns about the dependence of the United States on other countries for supplies of prescription drugs and ingredients.

The U.S. ignored the decline of domestic medical manufacturing and waited too long to seriously invest in the federal office designed to prepare for pandemics, Sen. Chris Coons, D-Del., said in an interview.

"We are now paying both in needless exposure by our front-line health workers and needless deaths for having not been better prepared for this," he says.

Nearly three-quarters of the active ingredient manufacturing facilities for medicines sold in the U.S. are located in other countries. Only 28% are domestic, according to Food and Drug Administration figures.

"Historically, the production of medicines for the U.S. population has been domestically based," Dr. Janet Woodcock, director of the FDA's Center for Drug Evaluation and Research, said in congressional testimony last October. "However, in recent decades, drug manufacturing has gradually moved out of the United States."

John McShane, a managing partner at the health care product consulting firm Validant, says he remembers when drug companies shifted much of their manufacturing overseas. "I was actually a victim of the move of APIs [active pharmaceutical ingredients] out of the country," he says.

He was a plant manager for Abbott Laboratories in the late '90s and returned to manufacturing in 2005 after a few years directing broader quality and validation programs at the company. But his return was short-lived.

"Abbott was shutting five plants, including the plant I used to work at, and outsourcing all of the production," he says. "The plant I used to run has been demolished. It's basically green space and asphalt now."

Abbott and AbbVie, a 2013 spinoff focused on pharmaceuticals, declined to comment.

Major companies have "mown down" the U.S. plants that made the key components of their drugs, McShane says. By his count, the last major API facility constructed in the U.S. was built almost 30 years ago.

He says companies moved manufacturing to locations with tax incentives, like Ireland, or countries that had cheaper labor and more lax environmental laws at the time, like India and China. Mergers and acquisitions in the pharmaceutical industry have also contributed to plant closures.

The danger of offshore supply chains

Coons says the United States should have been "concerned about the offshoring of most of the critical components of the supply chain that keeps us healthy and safe."

Today, the biggest suppliers of active pharmaceutical ingredients are India and China. The COVID-19 pandemic has spurred fears of shortages because of work interruptions and changes in export policies.

"If we have another global pandemic that leads the world to close borders and leads global supply chains to shatter or to break down, we are distinctly vulnerable because we are now so dependent upon globally integrated supply chains," Coons says, adding that these concerns also apply to other medical products, such as masks and ventilators.

Research shows a continuing decline in domestic drug manufacturing in recent years. The number of domestic API facilities registered with the FDA fell about 10% from 2013 through 2019, according to research by health economists Rena Conti and Ernst Berndt of Boston University and the Massachusetts Institute of Technology, respectively.

"To even get to 50% of our drugs being made in the U.S., it will take one to two decades and billions of dollars," McShane says. It would likely take government incentives to lure pharmaceutical giants back home.

Pharmaceutical Research and Manufacturers of America, the main trade group for the brand-name drug industry, "supports efforts to invest in" U.S. manufacturing, spokeswoman Holly Campbell said in statement. But, she said, there are advantages to having a globalized supply chain when emergencies strike because companies can shift their sourcing to unaffected facilities.

BARDA funding for research and development

The government has tools to spur the development and manufacturing of treatments and vaccines for COVID-19.

In March, Congress appropriated $3.5 billion for the Biomedical Advanced Research and Development Authority as part of legislation to respond to COVID-19. BARDA is part of the Department of Health and Human Services, and it was created in 2006 to speed up the nation's response to bioterrorism, emerging diseases and nuclear threats.

BARDA found itself in the spotlight this week, when Rick Bright, its director since 2016, said in a statement that he was removed from his post because he insisted that the government fund "safe and scientifically vetted solutions" to COVID-19 and not on "drugs, vaccines and other technologies that lack scientific merit." He said he pushed back against funding "potentially dangerous drugs promoted by those with political connections."

BARDA awards grants to fund research and development of experimental products in the hopes of eventually adding them to the National Strategic Stockpile. It also established a network of four domestic manufacturing facilities able "to address every day and emergency needs."

To combat COVID-19, BARDA announced it will support Johnson & Johnson and Moderna as they develop experimental vaccines against the virus, and will help Johnson & Johnson scale up manufacturing capabilities so it can make up to 300 million vaccine doses annually in the U.S.

What Congress gave BARDA last month as part of the CARES Act was more money than the office had been granted in the past. And Sen. Coons says past low funding levels are a problem.

"If you go back and look at the budgets of the last few years, we were not robustly investing in this work," Coons says. "And we should have been investing in things like the national stockpile, innovation in vaccines and in therapeutics and in ensuring our supply chain before there was a crisis."

Interest in preparing for a pandemic can be cyclical, says Dana Goldman, director of the Schaeffer Center for Health Policy & Economics at the University of Southern California.

"We're faced by a crisis," he says. "We realize we're unprepared. We are willing to spend a lot of money dealing with the situation. And then as the risks seem to wane and we change administrations, it's natural when you're trying to find other money for other priorities that you would see this type of cycle."