Accessibility links
Why Are Doctors Now Billing Patients For Some Phone Chats That Used To Be Free? : Shots - Health News As part of their social distancing policies, elected leaders suggested phone and video medical appointments would be covered by health insurance. So why are some patients paying $70 per virtual visit? 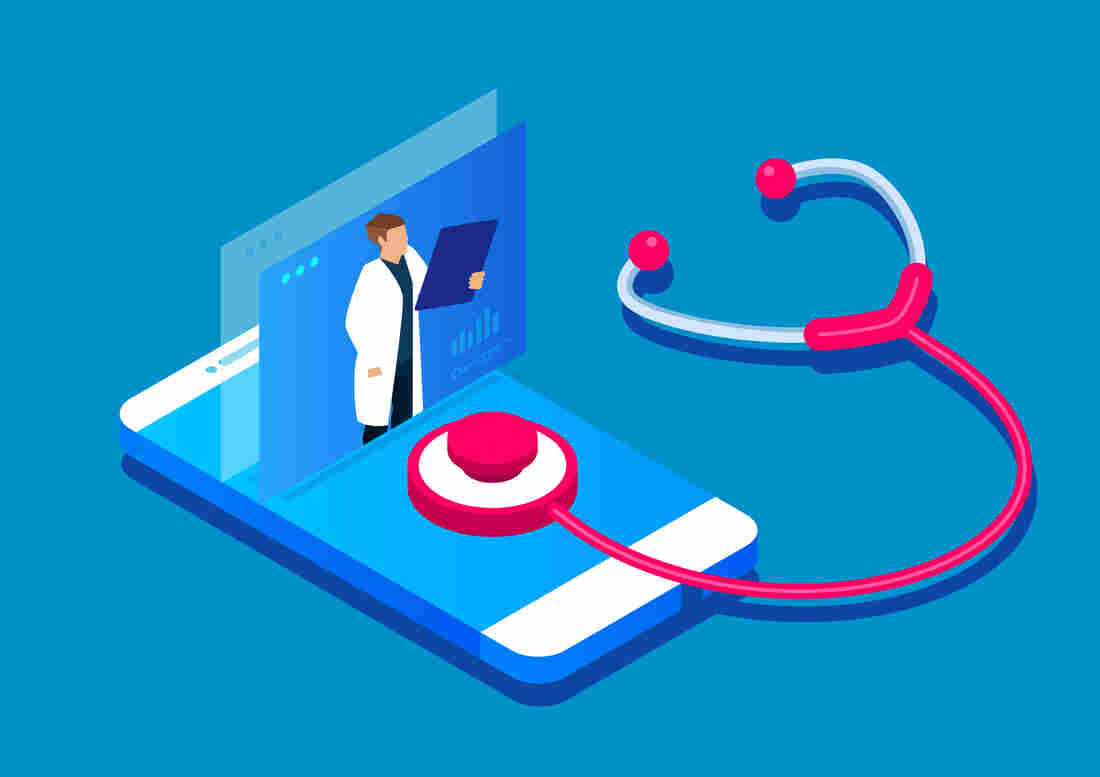 Despite recent changes in insurance policy, some patients say doctors and insurers are charging them upfront for video appointments and phone calls — not just copays but sometimes the entire cost of the visit, even if it's covered by insurance. sesame/Getty Images hide caption 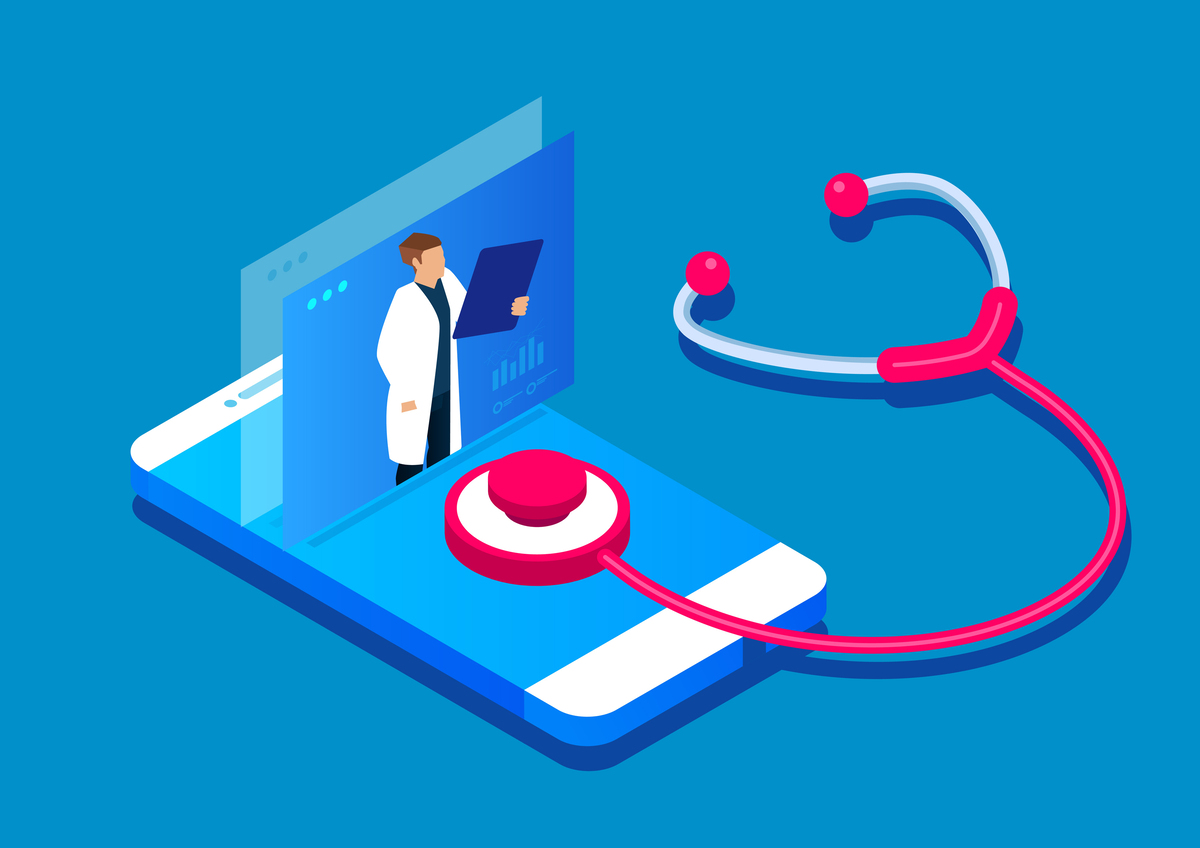 Despite recent changes in insurance policy, some patients say doctors and insurers are charging them upfront for video appointments and phone calls — not just copays but sometimes the entire cost of the visit, even if it's covered by insurance.

Karen Taylor had been coughing for weeks when she decided to see a doctor in early April. The number of COVID-19 cases had just exceeded 5,000 in Texas, where she lives.

Cigna, her health insurer, said it would waive out-of-pocket costs for telehealth patients seeking coronavirus screening through video conferences. So Taylor, a sales manager, talked with her physician on an Internet video call.

The doctor's office charged her $70. She protested. But "they said, 'No, it goes toward your deductible and you've got to pay the whole $70,' " she says.

Policymakers and insurers across the United States say they are eliminating copayments, deductibles and other barriers to telemedicine for patients confined at home who need to consult a doctor for any reason.

How To Get The Most Out Of Your Virtual Medical Appointment

"We are encouraging people to use telemedicine," New York Gov. Andrew Cuomo said last month after ordering insurers to eliminate copays, which are typically collected from the patient at the time of a doctor visit, for telehealth sessions.

But in a fragmented health system — which encompasses dozens of insurers, 50 state regulators and thousands of independent doctor practices ― the shift to cost-free telemedicine for patients is going far less smoothly than the speeches and press releases suggest. In some cases, doctors are billing for telephone calls that used to be free.

Patients say doctors and insurers are charging them upfront for video appointments and phone calls — and not just copays but sometimes the entire cost of the visit, even if it's covered by insurance.

Despite what politicians have promised, insurers said they were not able to immediately eliminate telehealth copays for millions of members who carry their cards but receive coverage through self-insured employers. Executives at telehealth organizations say insurers have been slow to update their software and policies.

"A lot of the insurers who said that they're not going to charge copayments for telemedicine ― they haven't implemented that," says George Favvas, CEO of Circle Medical, a San Francisco company that delivers family medicine and other primary care via livestream. "That's starting to hit us right now."

One problem is that insurers have waived copays and other telehealth cost sharing for in-network doctors only. Another is that Blue Cross Blue Shield, Aetna, Cigna, UnitedHealthcare and other carriers promoting telehealth have little power to change telemedicine benefits for self-insured employers whose claims they process.

Such plans cover more than 100 million Americans — more than the number of beneficiaries covered by the Medicare program for seniors or by Medicaid for low-income families. All four insurance giants say improved telehealth benefits don't necessarily apply to such coverage. Nor can governors or state insurance regulators force those plans, which are regulated federally, to upgrade telehealth coverage.

Many employer plans are starting to eliminate cost sharing, such as copays and deductibles, now that federal regulators have eased the rules for certain kinds of plans to improve telehealth benefits, says Brian Marcotte, CEO of the National Business Group on Health, a coalition of very large, mostly self-insured employers.

For many doctors, business and billings have plunged because of the coronavirus shutdown. New rules notwithstanding, many practices may be eager to collect telehealth revenue immediately from patients rather than wait for insurance companies to pay, says Sabrina Corlette, a research professor and co-director of the Center on Health Insurance Reforms at Georgetown University.

"A lot of providers may not have agreements in place with the plans that they work with to deliver services via telemedicine," she says. "So these providers are protecting themselves upfront by either asking for full payment or by getting the copayment."

David DeKeyser, a marketing strategist in Brooklyn, N.Y., sought a physician's advice via video after coming in contact with someone who attended an event where coronavirus was detected. The office charged the whole visit — $280, not just the copay ― to his debit card without notifying him.

"It happened to be payday for me," DeKeyser says — a week earlier and the charge could have caused a bank overdraft. An email exchange got the bill reversed, he says.

With wider acceptance, telehealth calls have suddenly become an important and lucrative potential source of physician revenue. Medicare and some commercial insurers have said they will pay the same rate for video calls as for office visits.

Some doctors are charging for phone calls that were once considered an incidental and nonbillable part of a previous office visit. Blue Cross plans in Massachusetts, Wyoming, Alabama and North Carolina are paying for phoned-in patient visits, according to America's Health Insurance Plans, a lobbying group.

"A lot of carriers wouldn't reimburse telephonic encounters" in the past, Corlette says.

Catherine Parisian, a professor in North Carolina, says what seemed like a routine follow-up call with her specialist last month became a telehealth consultation with an $80 copay.

"What would have been treated as a phone call, they now bill as telemedicine," she says. "The physician would not call me without billing me."

She protested the charge and said she has not been billed yet.

By many accounts, the number of doctor encounters via video has soared since the Department of Health and Human Services said in mid-March that it would take "unprecedented steps to expand Americans' access to telehealth services."

Medicare expanded benefits to pay for most telemedicine nationwide instead of just for patients in rural areas and other limited circumstances, HHS says. The program has also temporarily stopped requiring doctors to charge patients a copay at the time of the visit.

At the same time, the CARES Act, passed by Congress last month to address the COVID-19 emergency, allows private, high-deductible health insurance to make an exception for telehealth in terms of cost sharing. Such plans can now pay for video doctor visits even if patients haven't met the deductible.

Dozens of private health insurers listed by AHIP say they have eliminated patients' copays and other cost sharing for telemedicine. Cigna, however, has waived only some out-of-pocket costs — the costs of telehealth appointments associated with COVID-19 screening. Cigna did not respond to requests for comment.

Teladoc Health, a large, publicly traded telemedicine company, said its volume has doubled to 20,000 medical visits a day since early March. Its stock price has nearly doubled, too, since Jan. 1.

With such a sharp increase, it's not surprising that insurers and physicians are struggling to keep up, says Circle Medical CEO Favvas.

"It's going to be an imperfect process for a while," he says. "It's understandable, given that things are moving so quickly."

Abbie VanSickle, a California journalist, wanted her baby's scheduled wellness visit done remotely because she worried about visiting a medical office during a pandemic. Her insurer, UnitedHealthcare, would not pay for it, the pediatrician told her. Mom and baby had to come in.

"It seems like such an unnecessary risk to take," VanSickle says. "If we can't do wellness visits, we're surely not alone."

A UnitedHealthcare spokesperson says that there was a misunderstanding and that the baby's remote visit would be covered without a copay required of VanSickle.

Jacklyn Grace Lacey, a New York City medical anthropologist, had a similar problem. She had to renew a prescription a few weeks after Cuomo ordered insurers to waive a patient's share of the cost for telehealth appointments.

The doctor's office told her she needed to come in for a visit or book a telemedicine appointment. The video visit came with an "administrative fee" of $50 that she would have had to pay upfront, she says — five times what the copay would have been for an in-person session.

"I was not going to go into a doctor's office and potentially expose people just to get a refill on my monthly medication," she says.

Patients should check with their insurer before any telehealth visit to make sure telemedicine is covered by their health policy, Corlette says. If your employer plan doesn't pay for telemedicine or requires a copay, check with your company's human resources department. The company might change that policy if it is self-insured, as most large employers are.

"If you know of coworkers in the same boat, encourage them to ask HR as well," she says. "HR may pay more attention if the request comes from multiple sources."