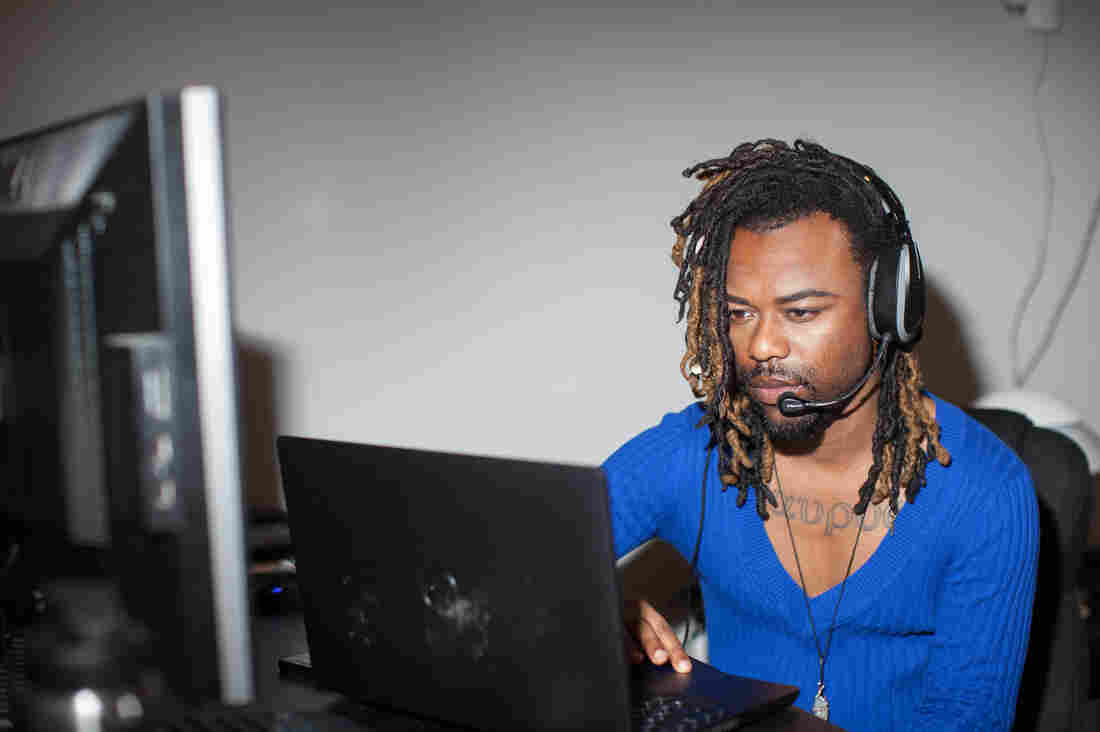 Malachi Stewart, with the Washington, D.C., health department, works full time as a contact tracer for the COVID-19 response. Washington plans to increase its contact tracing workforce in the near future. Ryan Kellman/NPR hide caption 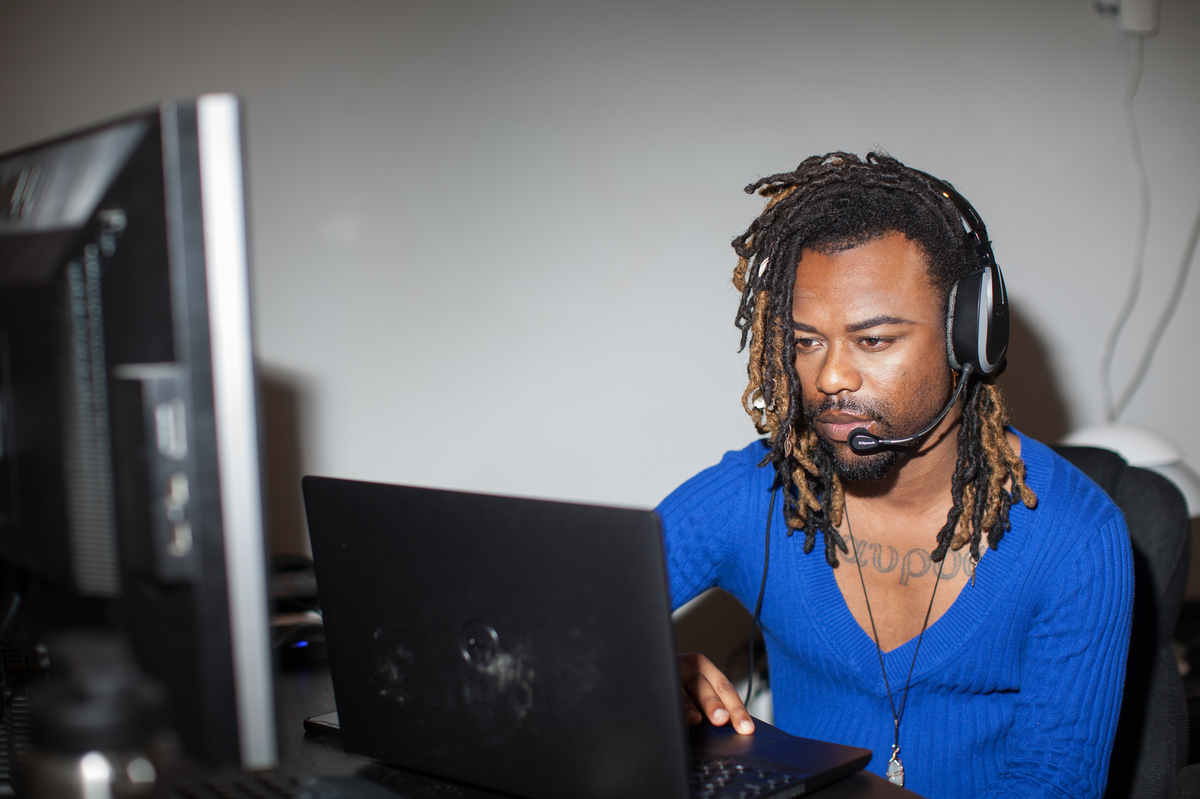 Malachi Stewart, with the Washington, D.C., health department, works full time as a contact tracer for the COVID-19 response. Washington plans to increase its contact tracing workforce in the near future.

Note: This story was originally published on April 28. We've updated it throughout to reflect updates and new data from several states.

In late April, NPR surveyed all 50 states, Puerto Rico and the District of Columbia to ask them about their contact tracing workforce. That survey showed that states had, or planned to have, around 36,000 workers in total focused on contact tracing, a key strategy to contain the spread of the coronavirus and prevent outbreaks.

In ten days since NPR first published the results of this survey, we've received responses from several more states; in addition some states with big populations announced new plans to increase contact tracing.

In all, 44 states and the District of Columbia now have plans to expand their contact tracing workforce, reaching a total of 66,197 workers — an increase by 30,000 of the number that were planned last week when we first published.

Public health leaders widely agree that communities need to ramp up their capacity to test, trace and isolate, in order to safely ease up on social distancing measures and allow people to get back to work.

The idea behind this public health strategy is simple: Keep the virus in check by having teams of public health workers — epidemiologists, nurses, trained citizens — identify each new positive case, track down their contacts and help both the sick person and those who were exposed isolate themselves.

This is the strategy that's been proven to work in other countries, including China, South Korea, and Germany. For it to work in the U.S., states and local communities will need ample testing and they'll need to expand their public health workforce. By a lot.

An influential group of former government officials released a letter last week calling for a contact tracing workforce of 180,000 around the country. Other estimates of how many contact tracers are needed range from 100,000 to 300,000.

Of 44 states and the District of Columbia for which we now have data, states reported having at least 11,142 contact tracers working now. (Figures for most states originally surveyed have not been updated so the total number may be higher.) But states seem to be moving fast to increase staffing.

Among the recent updates to states plans, California announced a partnership with UCSF to put 3,000 people a week through its 20-hour contact tracing training, with a goal of ultimately having 20,000 contact tracers. New York state also announced a plan to hire as many as 17,000 workers, in partnership with Bloomberg Philanthropies, the Johns Hopkins School of Public Health and the nonprofit Resolve To Save Lives.

The raw numbers each state needs varies by population size, the number of positive cases, and whether measures like social distancing have effectively limited the contacts for each case, says Dr. Tom Frieden, a former director of the Centers for Disease Control and Prevention, who leads Resolve To Save Lives.

According to the National Association of County and City Health Officials, which recently issued a position statement on contact tracing, 15 health workers per 100,000 people is a baseline number during normal times, and during a pandemic, this number should double to 30 contact tracers per 100,000 people. Policymakers in several states including New York and Illinois have mentioned this benchmark in announcing their staffing goals.

Still, the calculus for how many tracers are needed may not be as simple as looking at population size — the size of a community's outbreak and the number of contacts per case would also influence the number of contact tracers needed. Melaney Arnold, a spokeswoman for the Illinois Department of Public Health, noted in her response to NPR that the hiring decisions are complicated and that the speed with which positive COVID-19 cases can be tested and isolated affect their projected staffing numbers.

Several contact tracer workforce worksheets are now available to policymakers: One calculator was unveiled Thursday from two public health heavyweights — the Association of State and Territorial Health Officials and National Association of County and City Health Officials — and the Mullan Institute at the George Washington University. And another calculator is published by Resolve to Save Lives.

Big hiring efforts, but not everywhere

Several states that took our survey are making big efforts to shore up their contact tracing workforces. Notable examples include Louisiana and Kentucky, which are both planning to hire 700 people; Texas, which has 1,150 contact tracers and is hiring another 2,850 to start; and Kansas, which plans to bring on 400.

"I am really happy to see that there are a lot of places here that are thinking this through, and really putting a lot of effort into that next step," says Crystal Watson, a senior scholar at the Johns Hopkins Center for Health Security and a lead author of the center's white paper on contact tracing capacity.

Of the places that responded to NPR or have released this information in press releases, eight are positioned to surpass that 30 workers per 100,000 threshold: Alaska, California, the District of Columbia, Illinois, Michigan, Nebraska, New York and North Dakota.

"North Dakota leadership believes widespread testing capacity paired with a robust contact tracing infrastructure are key components to rising above this current health challenge," Vern Dosch, contact tracing administrator for North Dakota wrote in a statement to NPR. "We are committed to investing in the human resources and technology needed to make it happen. We are building tomorrow on facts, not fear."

Granted, North Dakota and Alaska have among the smallest populations of all states — hiring several hundred contact tracers to meet the need is certainly easier than onboarding 20,000 in California.

Including all planned staff additions, the average rate of contact tracers among the states we had data from would be 17 per 100,000 people – just above the estimated need during normal times, and half of what's projected to be needed during the coronavirus pandemic. The median is fewer: nine contact tracers per 100,000.

Watson warns states against playing this by ear. "This is really something we shouldn't undershoot," she says. Of course, public health officials need to keep a close eye on transmission and cases — more cases means you need more contact tracers — but Watson says investing in contact tracing now is the smart move.

"We're spending trillions of dollars on the economic aspects of this, which is important," she says. "But if we're not willing to put in that same effort to the public health side to actually control this and to reduce the economic impacts — fighting this at its source — that doesn't make sense to me."

A patchwork of staff and plans in flux

Not every state responded to NPR's request. A few states – including Idaho and Virginia — did respond, but said they were not able to provide statewide numbers of contact tracers, because contact tracing is done by local health departments.

A spokesperson for the Michigan health department explained that state employees assist "certain local health departments with case investigation and contact elicitation, which is the first step in the process of contact tracing," but the number of county staff that work to trace contacts was not available.

Other states that rely on county health departments to do contact tracing were only able to provide estimates of county staffing levels. Oklahoma's spokesperson explained that the 150 number of tracers they provided "is a ballpark as we have county nurses who do multiple jobs including contact tracing."

Another state that was not able to provide contact tracer numbers was Georgia, which has already begun to ease social distancing measures. Spokesperson Nancy Nydam of the Georgia Department of Public Health told NPR that "the total number of contact tracers will vary widely by [health] district, so we are not yet able to put an exact number to it." She added that the state was engaging with medical students and possibly the National Guard, and that more information would be available in the coming days.

In the survey, several states noted that their plans were very much in flux. "As we are developing our plans, we are hiring and training an initial group of epidemiologists," a spokesperson for Colorado's Joint Information Center responded to NPR in the survey, noting they are starting with 50 epidemiologists for now but may add more in the coming weeks.

A few states, including Minnesota, indicated they do not have current plans to hire more contact tracers. Andrea Ahneman, a spokesperson for the COVID-19 Response in Minnesota, wrote that the state had more than 100 staffers now and that "this is plenty of capacity for current needs." Minnesota later clarified to NPR that although it does not plan to hire new workers to do contact tracing, it does plan to reassign current state and local public health workers to do contact tracing, with a goal of reaching over 1,000 contact tracers over the next few weeks.

About half of states surveyed indicated they were considering the use of smartphone or online apps to assist with contact tracing. Few had decided on a specific app, but several mentioned the Google app that's in development. Some states indicated that they hoped the federal government could assist with the cost of licensing these apps.

How the federal government can help

Asked what support each state could use from the federal government, several states — including Hawaii, Maine and Nevada — mentioned the need for funding to hire or train new contact tracers. A spokeswoman for the District of Columbia said that D.C. could use "manpower and expertise, especially for training volunteers."

On the federal level, the Centers for Disease Control and Prevention provides staff to support local contact tracing efforts. Director Robert Redfield told NPR last month that the agency has about 500 staff currently deployed to help state and local health departments, and that it would support another 650 positions with $45 million in funds. He has acknowledged decades of underfunding for public health and said that the federal government needs to "augment personnel substantially." He also mentioned that his agency is in talks with other agencies and organizations with big boots-on-the-ground workforces to expand capacity.

A group of Democratic senators sent a letter to the CDC asking for details on these plans, but a congressional staffer tells NPR they have not received a response.

Numerous groups and experts are calling for more action and funds from the federal government. The group of former federal officials who wrote a letter last week calling for increased contact tracing hires also say $46 billion in federal funding is needed to pay for the hires and resources to help infected and exposed people stay isolated. A bill introduced in the House of Representatives Thursday calls for $55 billion to hire a national "Health Force" to do contact tracing and other public health work.

Scott Gottlieb, a former Food and Drug Administration chief for President Trump, told NPR that although assembling as many as 180,000 contact tracers nationally may be daunting, it's doable. "We already see the states making efforts to bring on thousands of new public health workers to do contact tracing," he said. "We're going to need this number of people if we want to enter into the fall with the kinds of resources we need to try to trace infection to prevent large outbreaks."

Federal leadership on contact tracing is important, says Watson of the Center for Health Security. "This is unprecedented — this is not something we've done before as a nation," she says. "It may be hard for some states to even think about how they get started on this, so guidance from the federal level is definitely needed."