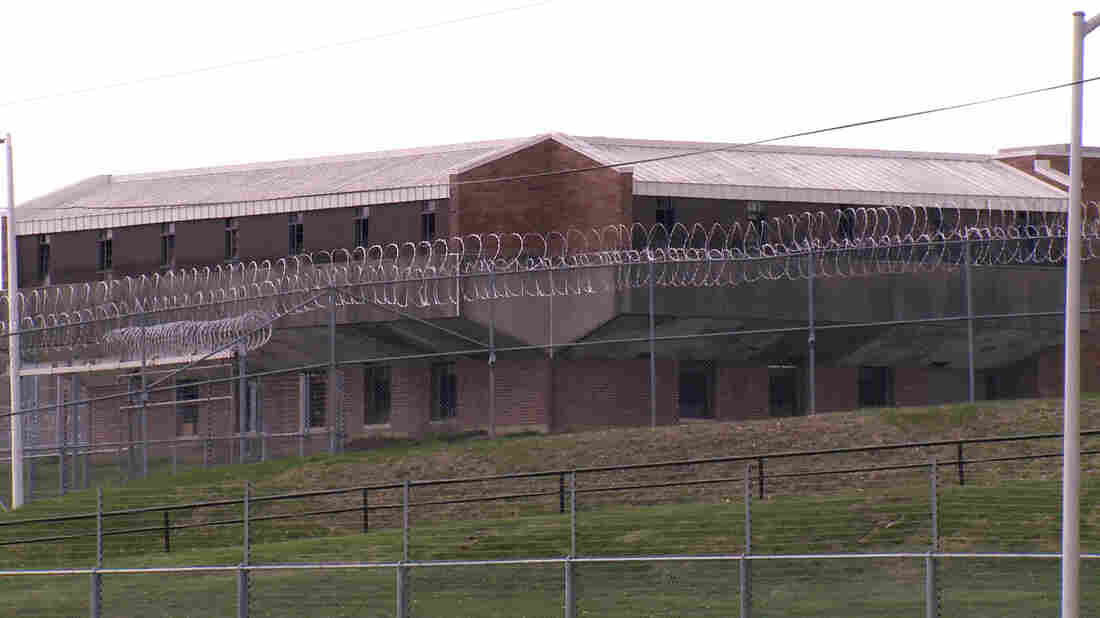 Plainfield Correctional Facility, an Indiana state prison southwest of Indianapolis, listed 89 cases of test-confirmed COVID-19 among inmates and four deaths from the illness, as of Thursday. Seth Tackett/WFIU/WTIU hide caption

On Monday, April 6, an inmate named Dennis stayed up late at Indiana's Plainfield Correctional Facility. He wrote to his wife, Lisa, and told her he was scared.

"I can tell you right now, with nearly 100% certainty, that I am going to get this virus," he wrote. Lisa says Dennis suffers from chronic obstructive pulmonary disease, which could cause complications if he gets COVID-19. (NPR agreed to omit their last names because they fear retaliation from prison staff.)

"I just need you to know how sorry I am for not being there ... during these scary uncertain times," Dennis wrote to his wife. He was sent to prison a year ago for theft, driving on a suspended license and resisting arrest. His earliest possible release date is in June 2021. "If I don't getta come home, please always know that you are and always will be the love of my life."

Two days later, he told Lisa that for the first time, prison staff took the inmates' temperatures. Some, including an inmate next to him, had fevers, but were still kept in the dorm with dozens of other men.

"He is about 3 ft. from me right now," Dennis wrote of the man with a fever. He wrote again that night after midnight to tell her the prisoners with fevers had finally been removed.

The Indiana Department of Correction says it is taking measures to prevent the spread of coronavirus among the nearly 27,000 inmates housed in the state's 21 facilities — including supplying hand sanitizer to inmates and isolating anyone who exhibits COVID symptoms.

But accounts from inmates and their relatives contradict the agency's claims. NPR and Kaiser Health News have heard from dozens of people concerned about their family members in prison. We've read messages from inmates and heard recorded phone calls with their loved ones.

They say prison staff members haven't taken adequate precautions to prevent the spread of the virus.

Many inmates who exhibit COVID-19 symptoms have been left in crowded quarters, according to these complaints. Inmates don't have hand sanitizer, and were only recently issued face masks.

"That's illustrative of what's happening across the country in county jails and departments of corrections," says Lauren-Brooke Eisen of the Brennan Center for Justice in New York. Thousands of incarcerated people have been infected — in one Ohio prison, 73% of inmates tested positive for the virus — and many have died.

"These are communal spaces, and they really are petri dishes for transmission of diseases such as COVID-19," says Eisen.

As of April 30, the state reported nine COVID-19 deaths and 346 inmate cases in correctional facilities. Indiana officials declined to be interviewed for this story and, so far, will not say how many prisoners have been tested.

In an April phone call, Dennis told Lisa he was sick. "I'm doing bad. I'm not doing good at all," he said, according to a recording she made of the call. "My head is splitting."

Dennis estimated that 15 prisoners had been removed from his dorm, which normally houses more than 80 people. He guessed about half of the remaining prisoners showed some sort of symptoms. 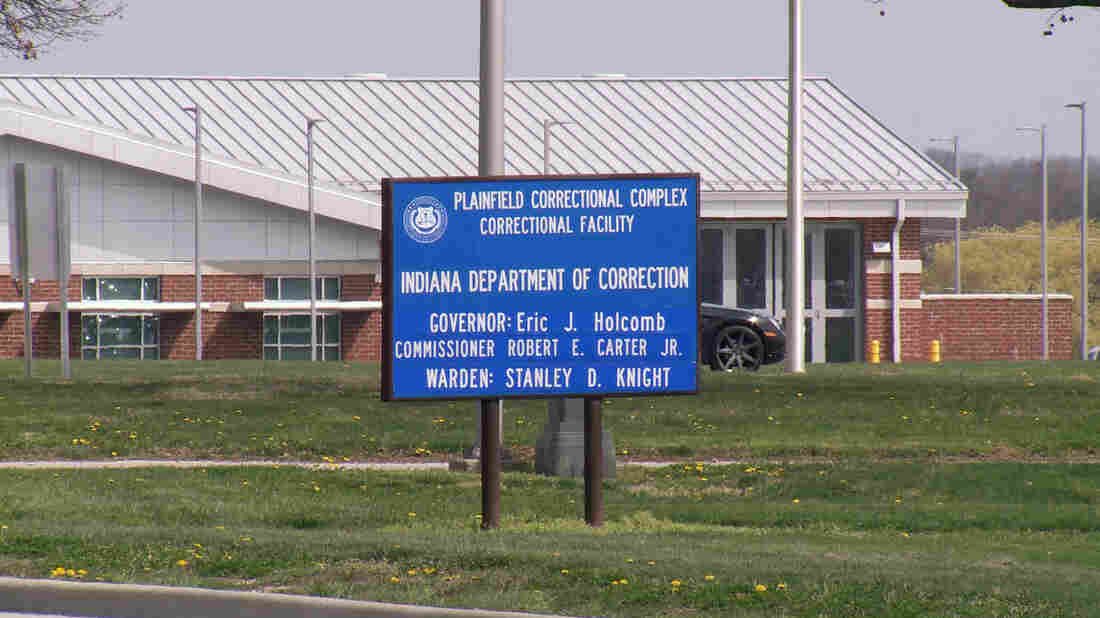 One inmate at the Plainfield Correctional Facility told his wife in a recorded call that social distancing is impossible. "At this very moment, I can reach out and touch somebody," he said. "We've got a reason to be scared for our lives." Seth Tackett/WFIU/WTIU hide caption

"It scares me so bad," Lisa said to Dennis.

"It scares me, too," Dennis replied. "Most of the guys in here are saying, "Well, we all got it. Just some of us have symptoms, some of us don't.'"

"They brought us another bar of soap today," Dennis said. "Everybody in here thinks, 'Well, somebody must have died today.'"

The state announced the next day that a prisoner from the Westville Correctional Facility had died. He tested positive for COVID-19.

Prisoner with asthma fears for his life

Other inmates and their family members tell similar stories about the conditions in Indiana prisons. Prisoners in their quarters exhibit symptoms, they say, but staff aren't checking on them unless they complain — in some cases, multiple times.

While the disease spreads, prisoners say they aren't able to take measures to protect themselves.

A second prisoner at the Plainfield facility told his wife in a recorded call that social distancing is impossible. "At this very moment, I can reach out and touch somebody," he said. "We've got a reason to be scared for our lives." Sentenced for a robbery, his earliest possible release date is in 2022.

Most Inmates With Mental Illness Still Wait For Decent Care

His wife told NPR her husband tried to make a tent with blankets to protect himself, but a guard told him to take it down.

"I told him, 'Absolutely not," she said. "This is the only way that you have to even protect yourself.'"

Two inmates, one at the Pendleton Correctional Facility and another at the Indiana State Prison, described incidents in which guards jokingly coughed in their direction.

"That's nothing to play with. It's my life," said the Pendleton inmate in a recorded call. He has asthma, he says. Many guards only recently began wearing masks.

Guidance put out by the Centers for Disease Control and Prevention, which the state says it follows, stresses the importance of hand sanitizer, social distancing and masks. The Indiana Department of Correction recently released a video indicating the agency regularly cleans its facilities, provides hand sanitizer to inmates and encourages social distancing.

Family members who saw the video say it made them angry.

The U.S. Supreme Court ruled, in a 1976 decision in the case Estelle v. Gamble, that "deliberate indifference to serious medical needs" is unconstitutional.

"They should be making every effort to spread the inmates apart as much as possible to provide for social distancing," says Horn, who now lectures at the John Jay College of Criminal Justice in New York.

The ACLU of Indiana, the Brennan Center for Justice, and other advocates have pushed the state to release certain inmates, such as the elderly or nonviolent offenders.

"It's necessary to curb the spread of coronavirus behind bars in this country," says Eisen of the Brennan Center. She points out that states such as Ohio, Kentucky and New York already have taken such steps in response to the pandemic.

So far, Indiana officials have resisted calls to do so.

"I do not believe in releasing those low-level offenders," Gov. Eric Holcomb said at a news conference on April 13. "We have got our offenders in a safe place — we believe maybe even safer than just letting them out."

A week later, three prisoners had died from COVID-19, and the confirmed case count had jumped from 27 to more than 200. Some family members of inmates said that if something happens to their loved ones, they'll blame Holcomb.

Lisa laughed when she heard the quote from the governor.

"Wow. That's a big lie," she says. "They have them herded like cattle, all crammed together, where the virus can just jump from one to the other. There's no protection."

"Yes, they committed a crime and they were sentenced," Lisa says. "But they weren't sentenced to death."

This story is part of a partnership between NPR, Kaiser Health News and Side Effects Public Media. Jake Harper can be reached at jharper@wfyi.org.