Accessibility links
Do Antibodies Against The Novel Coronavirus Prevent Reinfection? : Shots - Health News Scientists don't know whether people who have been exposed to the coronavirus will be immune for life, or if it can infect us again and again, like the common cold. 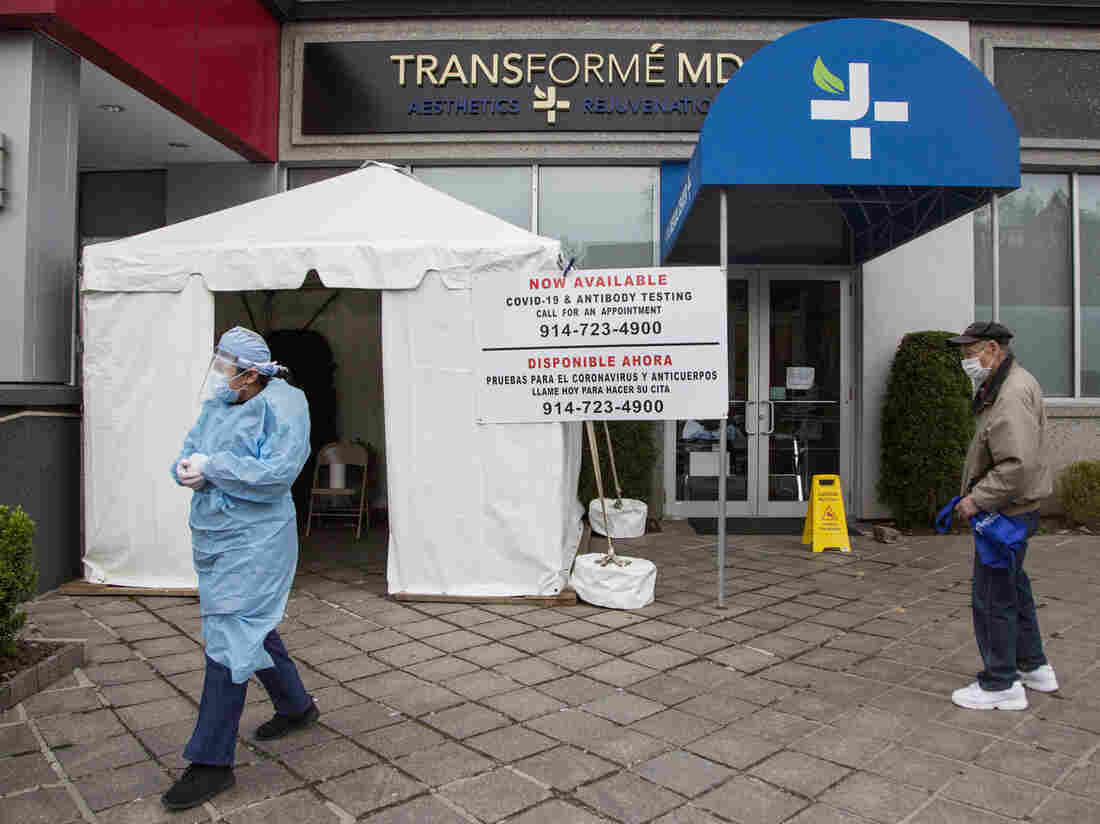 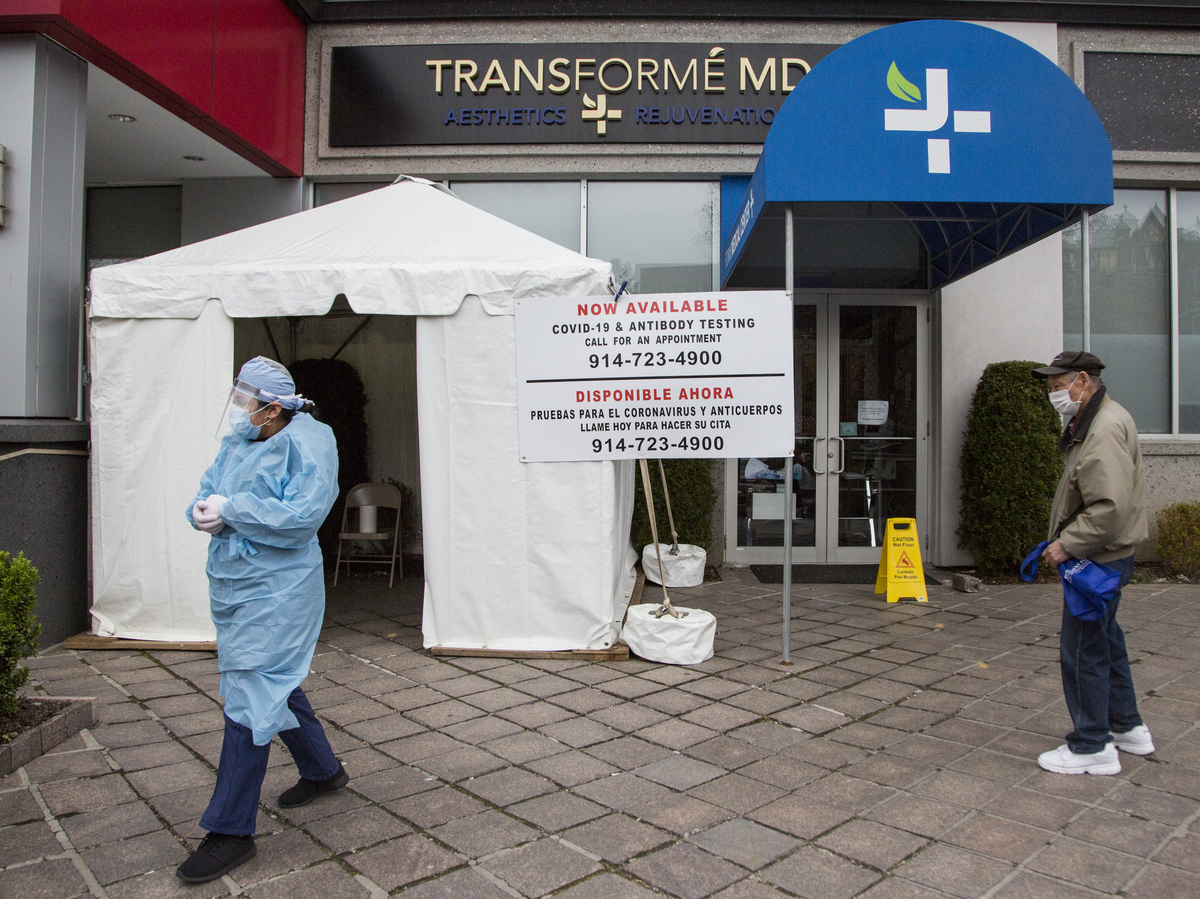 A medical worker walks in front of Transformé MD Medical Center in White Plains, N.Y., where antibody testing was being offered.

Most people infected with the novel coronavirus develop antibodies in response.

But scientists don't know whether people who have been exposed to the coronavirus will be immune for life, as is usually the case for the measles, or if the disease will return again and again, like the common cold.

"This to me is one of the big unanswered questions that we have," says Jeffrey Shaman, a professor of environmental health sciences at Columbia University, "because it really says, 'What is the full exit strategy to this and how long are we going to be contending with it?' "

He's one of many scientists on a quest for answers. And the pieces are starting to fall into place.

Antibodies, which are proteins found in the blood as part of the body's immune response to infection, are a sign that people could be developing immunity. But antibodies are by no means a guarantee a person will be protected for life — or even for a year.

Shaman has been studying four coronaviruses that cause the common cold. "They're very common and so people seem to get them quite often," Shaman says. Ninety percent of people develop antibodies to those viruses, at least in passing, but "our evidence is those antibodies are not conferring protection."

That may be simply because colds are relatively mild, so the immune system doesn't mount a full-blown response, suggests Stanley Perlman, a pediatrician who studies immunology and microbiology at the University of Iowa. "That's why people get colds over and over again," he says. "It doesn't really tickle the immune response that much."

He's studied one of the most severe coronaviruses, the one that causes SARS, and he's found that the degree of immunity depended on the severity of the disease. Sicker people remained immune for much longer, in some cases many years.

For most people exposed to the novel coronavirus, "I think in the short term you're going to get some protection," Perlman says. "It's really the time of the protection that matters."

Perlman notes that for some people the symptoms of COVID-19 are no worse than a cold, while for others they are severe. "That's why it's tricky," he says, to predict the breadth of an immune response.

And it's risky to assume that experiences with other coronaviruses are directly applicable to the new one.

"Unfortunately, we cannot really generalize what kind of immunity is needed to get protection against a virus unless we really learn more about the virus," says Akiko Iwasaki, a Howard Hughes Medical Institute investigator at the Yale University School of Medicine.

An immunobiologist, she is part of a rapidly expanding effort to figure this out. She and her colleagues are already studying the immune response in more than 100 patients in the medical school hospital. She's encouraged that most people who recover from the coronavirus have developed antibodies that neutralize the coronavirus in a petri dish.

"Whether that's happening inside the body we don't really know," she cautions.

But not all antibodies are protective. Iwasaki says some can actually contribute to the disease process and make the illness worse. These antibodies can contribute to inflammation and lead the body to overreact. That overreaction can even be deadly.

"Which types of antibodies protect the host versus those that enhance the disease? We really need to figure that out," she says.

The studies at Yale will follow patients for at least a year, to find out how slowly or quickly immunity might fade. "I wish there was a shortcut," Iwasaki says, "but we may not need to wait a year to understand what type of antibodies are protective."

That's because she and other immunologists are looking for patterns in the immune response that will identify people who have long-term immunity.

Researchers long ago figured out what biological features in the blood (called biomarkers) correlate with immunity to other diseases, says Kari Nadeau, a pediatrician and immunologist at the Stanford University School of Medicine. She expects researchers will be able to do the same for the new coronavirus.

Nadeau is working on several studies, including one that seeks to recruit 1,000 people who were previously exposed to the coronavirus. One goal is to identify people who produce especially strong, protective antibody responses. She says the antibody-producing cells from those people can potentially be turned into vaccines.

Another critical question she's zeroing in on is whether people who become immune are still capable of spreading the virus.

"Because you might be immune, you might have protected yourself against the virus," she says, "but it still might be in your body and you're giving it to others."

It would have huge public health implications if it turns out people can still spread the disease after they've recovered. Studies from China and South Korea seemed to suggest this was possible, though further studies have cast doubt on that as a significant feature of the disease.

Nadeau is also trying to figure out what can be said about the antibody blood-tests that are now starting to flood the market. There are two issues with these tests. First, a positive test may be a false-positive result, so it may be necessary to run a confirmatory test to get a credible answer. Second, it's not clear that a true positive test result really indicates a person is immune and, if so, for how long.

Companies would like to be able to use these tests to identify people who can return to work without fear of spreading the coronavirus.

"I see a lot of business people wanting to do the best for their employees, and for good reason," Nadeau says. "And we can never say you're fully protected until we get enough [information]. But right now we're working hard to get the numbers we need to be able to see what constitutes protection and what does not."

It could be a matter of life or death to get this right. Answers to these questions are likely to come with the accumulation of information from many different labs. Fortunately, scientists around the world are working simultaneously to find answers.