Accessibility links
Market For Blood Plasma From COVID-19 Survivors Heats Up : Shots - Health News As many firms and academic researchers vie for blood donations from survivors in hopes of isolating components for new treatments, one project is turning for help from 10,000 Orthodox Jewish women. 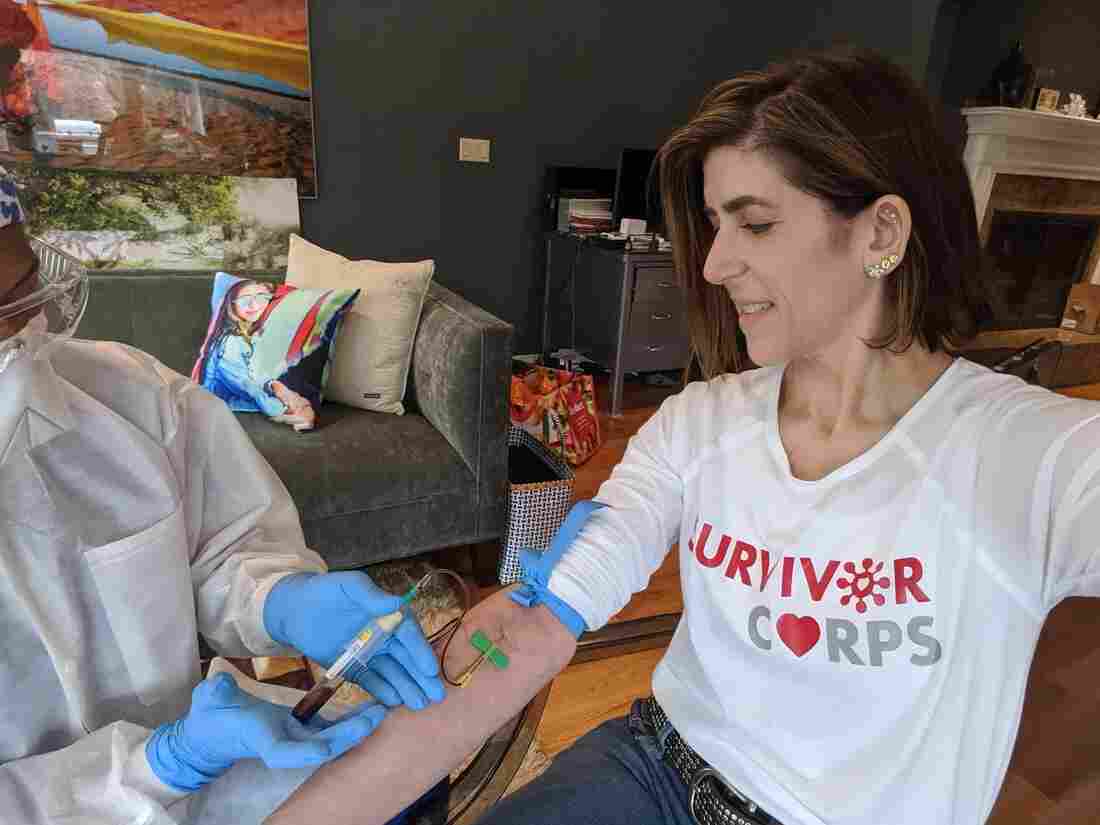 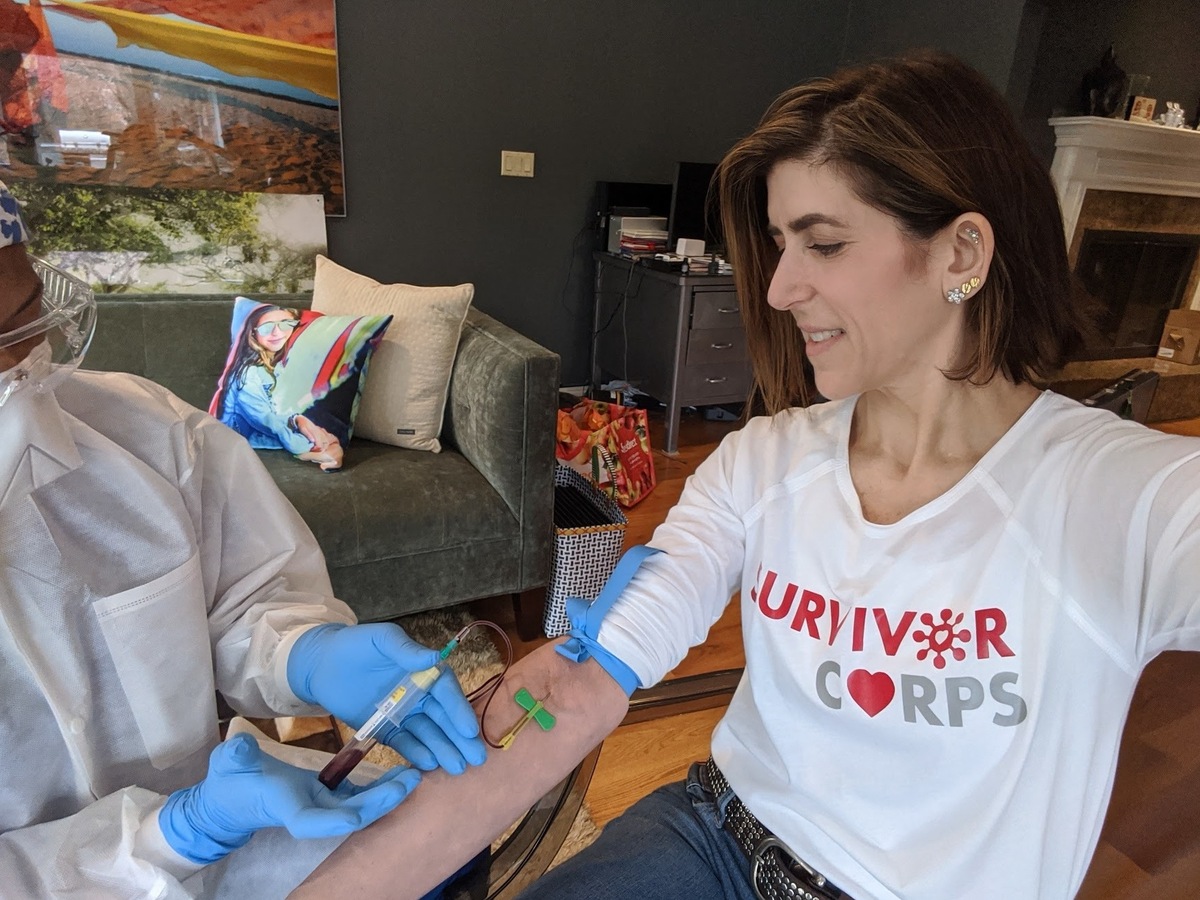 After testing positive for COVID-19, Diana Berrent established Survivor Corps, a grassroots clearinghouse for COVID-19 survivors interested in donating blood plasma to organizations developing therapies that might combat the disease.

Diana Berrent learned she had tested positive for COVID-19 on a Wednesday in mid-March. Within a day, she had received 30 emails from people urging her to donate blood.

Friends and acquaintances, aware of her diagnosis, passed along a pressing request from New York's Mount Sinai Health System, one of the first centers to seek plasma, a blood component, to be used in a therapy that might fight the deadly disease. Berrent, 45, said she immediately recognized the need for the precious plasma — and the demand that would follow.

"When I saw that email going around, I saw what was going to happen in the landscape," said Berrent, a photographer and mother of two who lives on Long Island. She went on to found Survivor Corps, a grassroots clearinghouse that connects people who have recovered from COVID-19 with organizations eager to collect their blood.

"What I saw was going to emerge was a free market where survivors were a commodity."

Nearly two months later, Berrent's prediction is coming true. The coronavirus has infected more than 1.2 million people in the U.S., and now government scientists, academic researchers and for-profit pharmaceutical firms all are scrambling for blood plasma from COVID-19 survivors in hopes of developing a range of potential treatments.

In Minnesota, a program coordinated by the Mayo Clinic has collected plasma from more than 12,000 COVID survivors for transfusion into more than 7,000 gravely ill patients, the result of a massive public appeal led by government leaders and nonprofit groups such as the Red Cross.

Meanwhile, for-profit companies that typically pay $50 per donation of plasma used in other lifesaving therapies are advertising aggressively — and significantly bumping up their rates for COVID donors.

In Utah, John and Melanie Haering, who contracted COVID-19 aboard the ill-fated Diamond Princess cruise ship, received gift cards worth $800 after making two donations apiece at a Takeda Pharmaceuticals' BioLife Plasma Services center. BioLife runs several of the more than 800 paid-plasma collection sites in the U.S., part of an industry that produces plasma protein therapies used to treat rare, chronic conditions such as hemophilia and in medical emergencies. 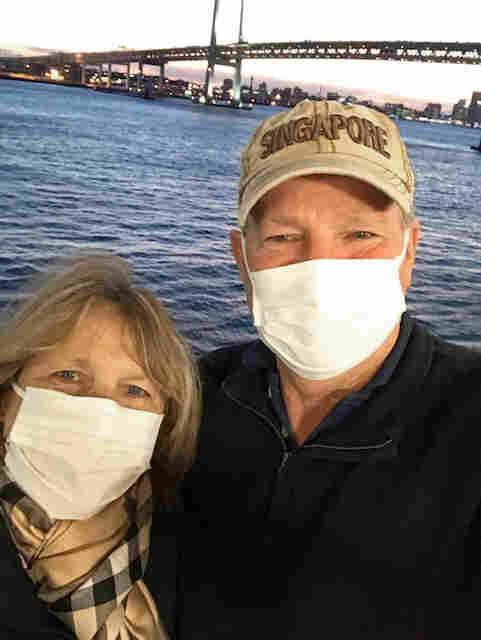 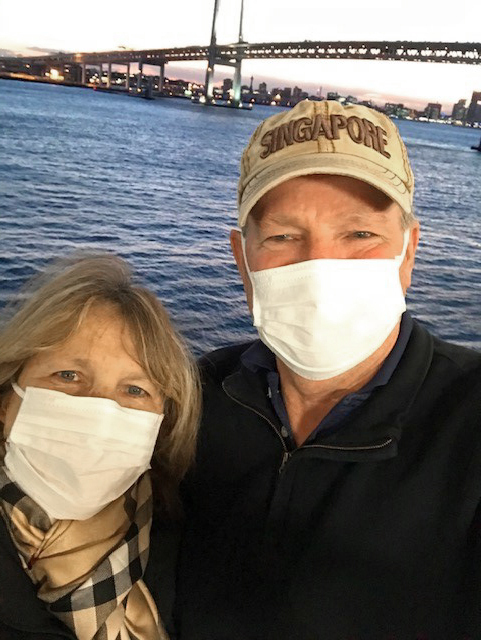 The money was a nice surprise for the Haerings, though they said they were motivated more by the opportunity to prevent others from suffering.

"If we could help anybody, we'd go every day," said John Haering, 63, a retired railroad manager who spent two weeks in a hospital in Japan after testing positive for the virus.

Donors such as Berrent and the Haerings are needed to supply the building blocks of potentially lifesaving treatments. Rich with antibodies, convalescent plasma from COVID-19 patients is being tested as a possible therapy to promote recovery in people who are critically ill with the disease.

It's also being collected to create a concentrated antibody serum known as hyperimmune globulin that may prevent or halt infection in the future. Similar products are used to treat rabies and illnesses such as infant botulism. If plasma from COVID-19 donors is shown to halt disease, coming up with an antidote could offer companies the prospect of making millions of dollars.

And there's the possibility of a third treatment, monoclonal antibody therapy, which would use antibody-producing cells from high-antibody donors to create lab-produced molecules to fight the disease.

All three therapies are promising, but all three require human blood plasma, said Dr. Michael Busch, a professor of laboratory medicine at the University of California, San Francisco and director of the Vitalant Research Institute, one of the largest blood center-based transfusion medicine research programs in the United States.

"At some level, they're all competing with the regular blood banks like mine," Busch said.

Only a fraction of those infected with COVID-19 have recovered sufficiently to donate, though more are eligible every day. But as demand for donors has grown, so has the need to wrangle the supply, ensuring that competition for plasma doesn't undercut the larger mission, said Dr. Michael Joyner, who heads the Mayo Clinic program.

"We're going to get it all worked out," he said. "It's in everybody's enlightened self-interest to do this in an intelligent way."

To avoid what Joyner described as a "range war" for COVID-19 plasma, he's spearheading an effort that calls for unprecedented collaboration to distribute separate streams of plasma among producers of therapies in a global market estimated to reach $35.5 billion by 2023.

His plan — floated last month to a group that included representatives from philanthropic organizations along with executives from for-profit and nonprofit blood collectors — relies in part on blood plasma from up to 10,000 Hasidic women in New York City, where the Orthodox Jewish community has been hit hard by the disease.

How Reliable Are COVID-19 Tests? Depends Which One You Mean

Tens of thousands of people have fallen ill with the virus in the city's Hasidic neighborhoods, and more than 700 have died. In recent weeks, thousands of men in the community who have recovered from COVID-19 have rushed to donate plasma. Chaim Lebovits, who has helped organize the effort, said the donations are an act of faith.

"We have an obligation to protect and save lives," Lebovits said.

So far, however, many women in the Hasidic community have been unable to participate. Hasidic families are often large, and women who have had several children may have high levels of certain antibodies that are sometimes produced during a pregnancy. Rarely, such antibodies can cause a dangerous reaction — transfusion-related acute lung injury — in some recipients of plasma from women who have been pregnant. In COVID-19 patients, battling a virus that targets the lungs, such reactions could be deadly.

Given the risk, many Hasidic mothers who want to join the men in donating have been deferred from providing plasma for immediate transfusion, the Mayo Clinic's Joyner said. But those women could be an ideal and ongoing source of plasma for hyperimmune globulin, which is processed in a way that dilutes or removes the antibodies.

Roughly 10,000 women could donate up to four times each — generating some 30,000 liters of plasma from people who have recovered from COVID-19 that could be directed to the for-profit collectors to make hyperimmune globulin, Joyner estimated. That's enough for the companies to get started.

"This is the basis of a true win-win," Joyner said.

In the future, other groups deemed ineligible to provide convalescent plasma for transfusion, out of concern about disease transmission, could be diverted for hyperimmune globulin creation, he said.

One key part of the plan will be the ability to identify eligible donors through antibody tests, Joyner said. Mayo Clinic scientists have already conducted more than 5,000 serology tests and identified hundreds of potential plasma donors.

So far, however, neither the nonprofit organizations nor the for-profit firms have agreed to the plan.

"Ways to facilitate these donations and recommendations for how to allocate donors to one donation stream or the other are still in progress," said Natalie de Vane, a spokesperson for CSL Behring, a biopharmaceutical company based in King of Prussia, Penn.

CSL has joined with Takeda, a Japanese pharmaceutical company, to lead the CoVIg-19 Plasma Alliance, a coalition of six companies developing a single, unbranded hyperimmune globulin product that could treat COVID-19.

Meanwhile, officials with the AABB, an international nonprofit focused on transfusion medicine and cellular therapies, have concentrated efforts primarily on collecting plasma for immediate use. But they acknowledged that convalescent plasma could end up serving as "bridge therapy" to buy time until the hyperimmune globulin products are available.

"AABB recognizes the importance of ensuring that convalescent plasma is available as a transfusion therapy for patients today, as well as to develop future treatments," the agency said in a statement.

Representatives from all sides agree that the most pressing need is to increase the pool of COVID-19 survivors willing to donate plasma. They downplay talk of jockeying for donors in the nonprofit and for-profit worlds.

"We don't view it as competition," said Chris Healey, president of corporate affairs at Grifols, a Spanish pharmaceutical company that has received nearly $13 million in funding from the U.S. Department of Defense to develop its own hyperimmune globulin product. "We're all pointed in the same direction."

One solution may be organizations such as Berrent's nonprofit Survivor Corps, which started in late March with a Facebook group that's grown to 42,000 members and now includes international partnerships and a pro bono advertising campaign, A Call to Arms.

Berrent has given plasma four times now, including to a biotech firm that sent a phlebotomist to her home and gave her a $100 Amazon card for her trouble.

Survivor Corps aims to function as a "one-stop shop" for donors interested in giving COVID-19 plasma, Berrent said. And, she said, it also could serve as a single source for recruitment, freeing scientists in government, academia and industry to focus on finding answers, not scouting for survivors.

"Free markets work beautifully in many, many situations," Berrent said. "During a global pandemic, during a time of crisis, we need collaboration and efficiency."

Kaiser Health News is a nonprofit, independent program of the Kaiser Family Foundation. KHN is not affiliated with Kaiser Permanente.