Accessibility links
Internal Federal Documents Warn Georgia Hospital Capacity Not Up For A Surge : Shots - Health News Internal federal documents warn that too many ICU beds in the state are already full, even as the state leads the move away from lockdown.

As Georgia Lifts Restrictions, Its Hospitals May Be Unready For A COVID-19 Surge

As Georgia Lifts Restrictions, Its Hospitals May Be Unready For A COVID-19 Surge 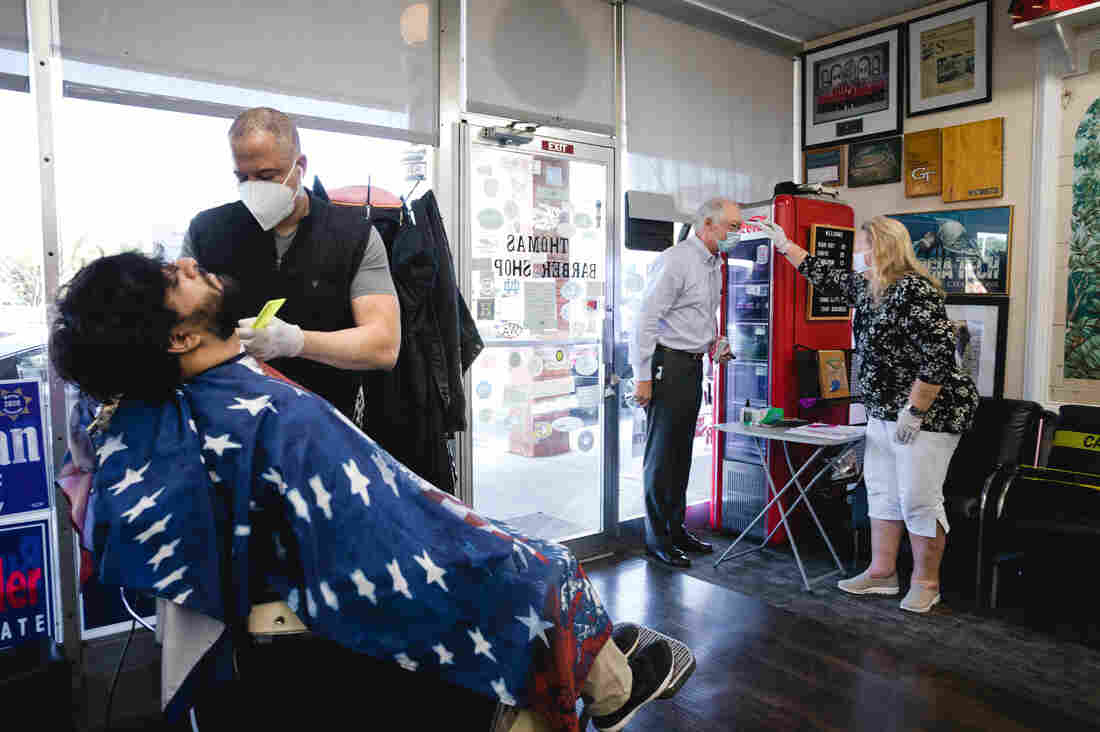 Many counties in Georgia may not have enough hospital beds to treat a new wave of COVID-19 patients, according to internal federal government documents. Above, a barbershop in Atlanta on April 27. Dustin Chambers/Bloomberg via Getty Images hide caption 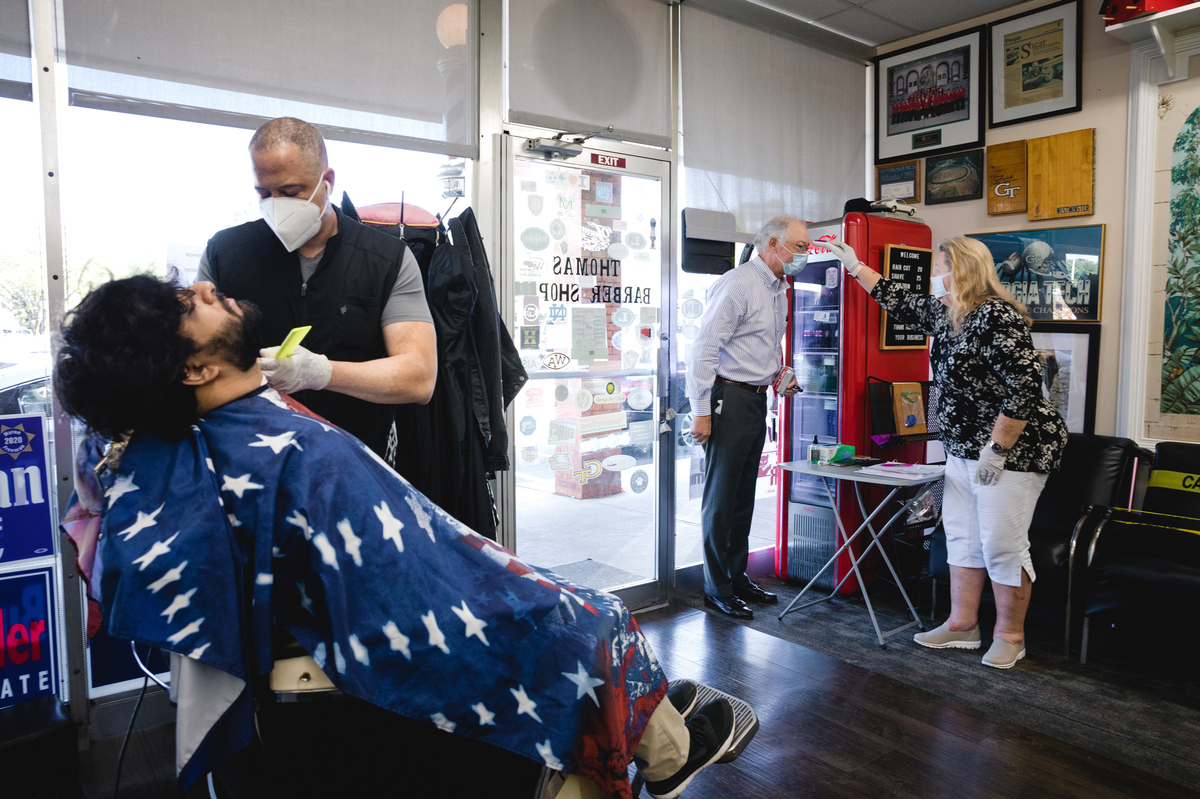 Many counties in Georgia may not have enough hospital beds to treat a new wave of COVID-19 patients, according to internal federal government documents. Above, a barbershop in Atlanta on April 27.

Georgia — one of the first states to reopen its economy — may not have enough hospital beds to treat a new wave of critically ill patients infected with the coronavirus, according to internal federal government documents obtained by the Center for Public Integrity.

A slide prepared by the U.S. Department of Health and Human Services for an interagency briefing last week said Georgia's intensive care unit beds were 79% full on May 6, based on data from the Centers for Disease Control and Prevention.

"Data suggest that Georgia may have limited healthcare capacity margin to respond to a future surge in critically ill patients," reads the slide, which is marked "NOT FOR DISTRIBUTION."

The warning for Georgia comes even as the White House and federal agencies shift their focus to helping states restart their economies. The federal government also wants states to assume more responsibility for pandemic response. The Federal Emergency Management Agency, for one, is planning a "right-sizing" of its operations after Memorial Day, and HHS is making plans to "transition back to a regionally managed public health emergency" approach, said officials on a recording of a meeting from last week obtained by Public Integrity.

Georgia Gov. Brian Kemp, a Republican, allowed gyms, bowling alleys, hair salons and some other businesses to reopen April 24. He lifted all other restrictions at the end of April, while advising elderly and sick people to stay home.

"What we've done has worked," Kemp told the Atlanta Journal-Constitution. "It's given us time to build our hospital infrastructure capacity, get ventilators and ramp up testing. That's what really drove our decision."

Kemp has also cited concerns about Georgia's economy, one of the hardest hit by job losses, when defending his reopening plan.

Kemp's spokesperson, Cody Hall, told Public Integrity that he would not comment on how the state would handle any future coronavirus surge. Hall pointed to the state's data on hospital bed capacity, which is slightly rosier than the federal outlook. The state has also set up a 200-bed temporary hospital in an Atlanta convention center and, with the help of FEMA, dispatched four mobile units of about 22 beds each to different corners of the state.

If Georgia's decision to reopen early backfires, certain residents may shoulder the bulk of the consequences — not only the elderly, who are at higher risk of complications from the virus, but also African Americans.

A CDC study released last week showed that a disproportionate number of Georgians hospitalized with COVID-19, the disease caused by the coronavirus, are African American. And while African Americans make up about 30% of Georgia's population, they account for half of reported COVID-19 deaths.

Georgia Tech professor Pinar Keskinocak said she is not surprised by the HHS assessment that the state may run out of ICU beds.

"That's very much in line with our predictions as well," said Keskinocak, who leads a team modeling several potential scenarios for the future of the coronavirus in Georgia. "In most of those scenarios, we found that there would be shortages."

Keskinocak's modeling team at Georgia Tech determined that hospitals in the state would run out of beds for COVID-19 patients before mid-August in all but two of the 14 local hospital regions — even if 60% of Georgians did a good job at staying at home when they or their household members felt sick. The Georgia Tech group has shared its projections with the state's Department of Public Health.

"I can tell you they are listening very carefully. But what happens beyond that I cannot tell," Keskinocak said. "The input they get from modelers is one input. How they trade off many of those things and make a decision, I don't know."

Stephen Daugherty, CEO of Coliseum Medical Centers in Macon, Georgia, said that he's not at this time worried about a surge in coronavirus cases but that Georgians should consider social distancing "important" until there is a vaccine or "a sufficient number are determined to be immune through herd immunity."

Hospitals across the U.S. have used the last few months of social distancing to add beds, acquire ventilators and otherwise prepare for a potential surge in COVID-19 patients. But the CDC data show that in Georgia, the District of Columbia and five other states — Alabama, Colorado, Maryland, Rhode Island and Washington — more than 70% of ICU beds were in use as of May 12.

The White House listed "ability to surge ICU capacity" as one of the key requirements for states in its reopening plan released in April. Experts have also said hospitals must be ready to handle a sudden onslaught of patients.

"The capacity to cope with a surge in cases, and to detect it promptly, are the minimal requirements as states calibrate reopening," said William Hanage, a Harvard University epidemiologist, in an email.

The White House did not respond to a request for comment. An HHS spokesperson who refused to be named said the coronavirus response is "federally supported but led by the local authorities" and will continue to be. FEMA did not directly answer questions about winding down its operations, but a spokesperson who refused to be named said it would continue leading the coronavirus response until directed otherwise by President Trump.

The CDC did not answer a question about whether it had warned Georgia about the potential shortage of hospital beds.

The CDC is offering local officials "technical assistance, tools, and resources that are specific to the circumstances and needs in their communities," CDC spokesperson Kristen Nordlund said in an email. "States are empowered to make decisions about opening up and any questions about their decisions and capacity should be directed at them."

The Georgia Department of Public Health did not answer a question about whether the state's ICU bed capacity was sufficient.

Data published by the state were slightly more optimistic about hospitals' bed capacity there. The same day it was reported at the federal briefing that 79% of Georgia ICU beds were full, according to CDC data, the state reported the figure at 73%. As of Tuesday, the CDC reported that 71% of Georgia's ICU beds were full; Georgia said 66% as of Monday. According to Georgia's data, the portion of Georgia critical care beds that are full has hovered around 70% since April 14, the earliest date for which the state has reported such numbers.

The CDC data are based on a nationwide survey of hospitals and do not include every institution; the Georgia data are self-reported by hospitals, said Georgia Department of Public Health spokesperson Nancy Nydam, who offered no further details.

Georgia as a whole is seeing a slight decrease in its average new daily coronavirus cases since late April — from 741 in the week ending April 26 to 702 in the week ending May 10. But in the 21 counties that make up the Atlanta metropolitan statistical area — which has the bulk of the state's coronavirus cases — the average of new daily cases has gone up in that same time frame. And ICU beds in the region are already mostly full.

ICU beds in the 12-county hospital region just south of Atlanta were 89% full on May 11, state data show. Most of the other regions bordering Atlanta were over 70% full.

In the region home to Atlanta and the CDC's headquarters, nearly 2 in every 3 critical care beds were occupied.

But other places in Georgia have more wiggle room. Hospitals in southeast Georgia still had more than half of their ICU beds available May 11. The state had witnessed more than 34,000 total confirmed COVID-19 cases and more than 1,400 deaths as of Tuesday, May 12.