Accessibility links
White House List Of Testing Labs Wasn't Helpful, States Say : Shots - Health News Representatives from a number of states said the list provided to them for coronavirus testing contained labs that they already knew about, or ones that weren't approved for the testing. 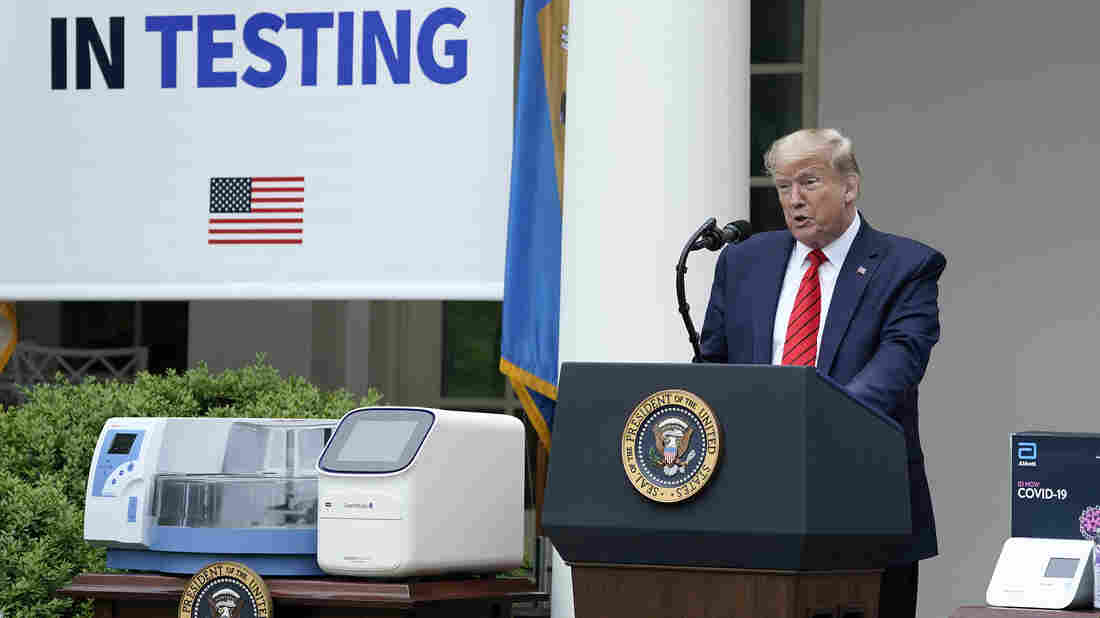 President Donald Trump, flanked by tables holding testing supplies and machines, speaks during a press briefing about coronavirus testing in the Rose Garden of the White House on May 11, 2020 in Washington, D.C. Drew Angerer/Getty Images hide caption 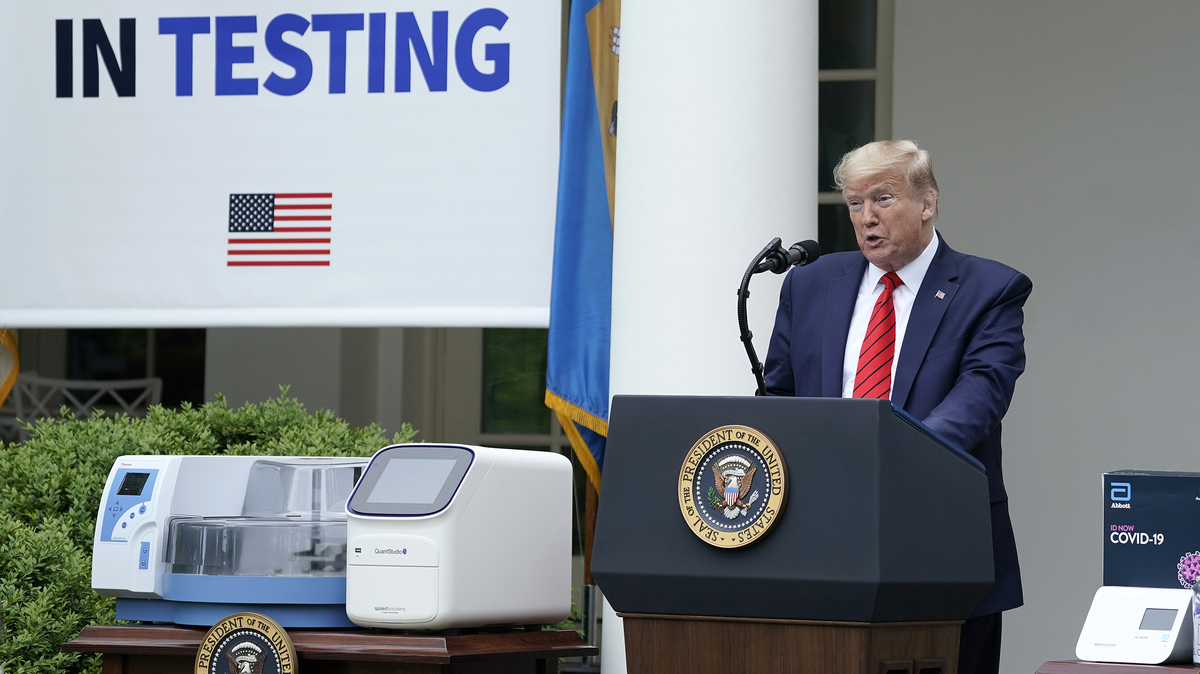 President Donald Trump, flanked by tables holding testing supplies and machines, speaks during a press briefing about coronavirus testing in the Rose Garden of the White House on May 11, 2020 in Washington, D.C.

The White House has touted the fact that its coronavirus task force provided each state with a list of labs that could potentially test for the virus, but officials in a number of states told NPR that the lists did not actually help them increase testing.

The White House task force has said for weeks that testing in the U.S. is going smoothly, and that it is helping states gear up to check more people for SARS-CoV-2, the virus that causes COVID-19. That capacity is still lacking in many places that are considering re-opening their economies after locking down in an attempt to slow the spread of the virus.

On April 20, President Trump said that the task force had given each state a list of labs that could offer additional testing capacity. He later said this had quickly produced dramatic results.

"One week ago, we provided each governor with a list of names, addresses, and phone numbers of the labs where they could find additional testing capacity in their states," said President Trump during one of the task force's daily briefings. "Within 48 hours, the number of tests performed across the country began to absolutely skyrocket."

NPR reached out to all 50 state health departments to ask about their testing efforts, including what impact the the task force's list had.

Twenty-five states responded to NPR's questions, though not all answered specific questions about the task force's lists of labs. Of those that did, however, only one — Alabama — said the list it received had helped.

"We don't recall seeing this list, but we believe we know the labs in state and out of state that are available to us currently," replied Elizabeth Goodsitt, a communications specialist with the Wisconsin Department of Health Services, who noted that her state already had an established network of clinical labs.

Officials from the Colorado State Joint Information Center replied that the list they received had been reviewed but "it did not identify any labs we were not aware of."

Representatives from Idaho and South Carolina also responded that officials there had seen the list, but that it did not result in any additional testing. Minnesota officials replied that they had reviewed the list but when asked if it had led to an increase in testing, replied "not yet."

In Wyoming, the list was reviewed, but, according to officials, it did not provide any useful new information because it included veterinary or research labs that did not have the regulatory approval needed to perform diagnostic medical testing for people. The labs that had the necessary approvals "were already performing COVID testing," explains Kim Deti, a public information officer at Wyoming's Department of Health.

Other states cited similar problems. "The list from the White House omitted some labs that are doing testing and included sites that do not have current capacity to do COVID-19 testing," said Robert Long, communications director at Maine Center for Disease Control and Prevention.

The lack of testing supplies was also a concern for some officials, who noted that the labs on the list had testing machines, but did not have the materials such as swabs and testing chemicals they needed to perform coronavirus tests.

"Oregon had already surveyed labs to identify what instruments are already in the field," said Robb Cowie, a spokesperson for the Oregon Health Authority, referring to the testing machines. "The issue is that these instruments are not being supplied with the reagents/test cartridges needed to run to their maximum capacity."

Similarly, the list received by Montana did not result in any increase in testing because the laboratories on that list are not receiving "an adequate supply of kits, reagents and supplies," according to Jon Ebelt, a public information officer for Montana's Department of Public Health and Human Services.

"We received a partial list of laboratories that have equipment, have reviewed the list and provided feedback to the Governor's Coronavirus Task Force," Ebelt said. "The list outlined test equipment but did not delve into testing supply availability for that equipment."

Vermont officials did review the list received from the task force, but it did not have any effect as the state does "not need increased lab capacity at this time," according to Erik Filkhorn, a spokesperson for Vermont's health operations center.

On April 20, the day that the lists of labs went out, Maryland Governor Larry Hogan noted on a conference call with the coronavirus task force that the list given to his state included federal labs that the state couldn't access, despite his having tried to get access for more than a month.

That, plus the news that Maryland had obtained a half-million testing kits from South Korea, seemed to draw a swift rebuke from the president.

"Some of the governors, like, as an example, the governor from Maryland, didn't really understand the list," said President Trump. "He didn't understand too much about what was going on. So, now I think he'll be able to do that. It's pretty simple. But they have tremendous capacity and we hope to be able to help him out."

Hogan responded by immediately writing a letter to the president thanking him for his "generous offer" and asking for assistance in securing access to testing equipment in federal labs. Last week, a spokesperson for the Maryland Department of Health told NPR that it "has been in discussions with the National Institutes of Health and other federal labs in the state about processing COVID-19 tests."

The NIH, however, seemed to suggest that such discussions either were no longer happening or had not been fruitful. "NIH's laboratories support clinical research conducted at the NIH Clinical Center and testing of NIH staff suspected of coronavirus infection," a spokesperson told NPR. "NIH does not currently have the laboratory capacity to support testing beyond our own staff and Clinical Center patients."

Alabama is the only state where officials told NPR that the list had been reviewed and that it had resulted in increased testing. "Some additional commercial labs were beginning to test" for the virus, said Karen Landers of the Alabama Department of Public Health. "These were additional resources for the citizens of the state."

Landers said how much testing was added "varies" depending on "whether labs have issues with collection supplies, reagents, and so forth which can happen with any lab depending on demand."

Federal officials continue to cite the task force lists that were given to the states as an important step in ramping up the nation's testing.

During testimony to lawmakers on Tuesday, for example, White House coronavirus task force member Admiral Brett Giroir noted that the government had "detailed the location and capacity of every lab machine in every state that could potentially run COVID-19" tests.

And an official with the task force, when asked by NPR if there was any evidence that these lists had significantly assisted states, said that "the success of this effort is in the increased testing the nation has seen in recent weeks due to states tapping into unused capacity."