Accessibility links
Remdesivir Distribution Hits Early Snags : Shots - Health News Gilead Sciences is donating its initial supply of the experimental treatment for COVID-19. The federal government is deciding where the scarce medicine goes, and there are questions about the choices. 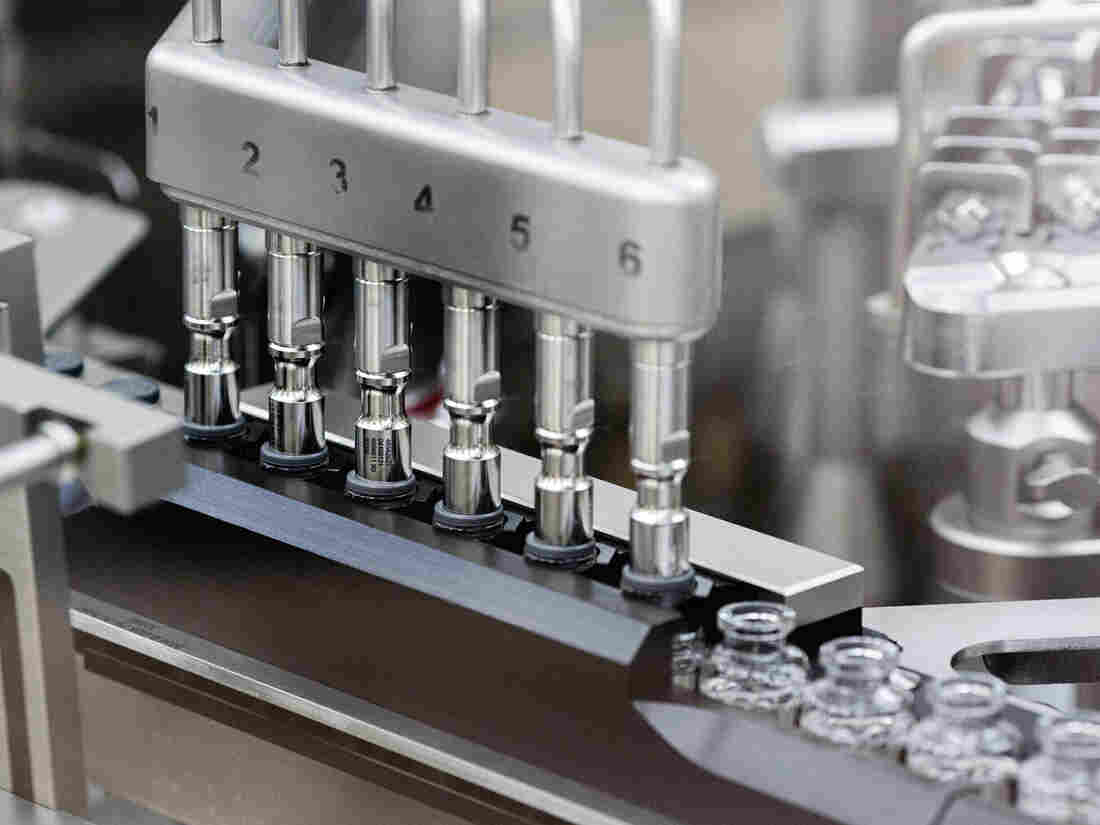 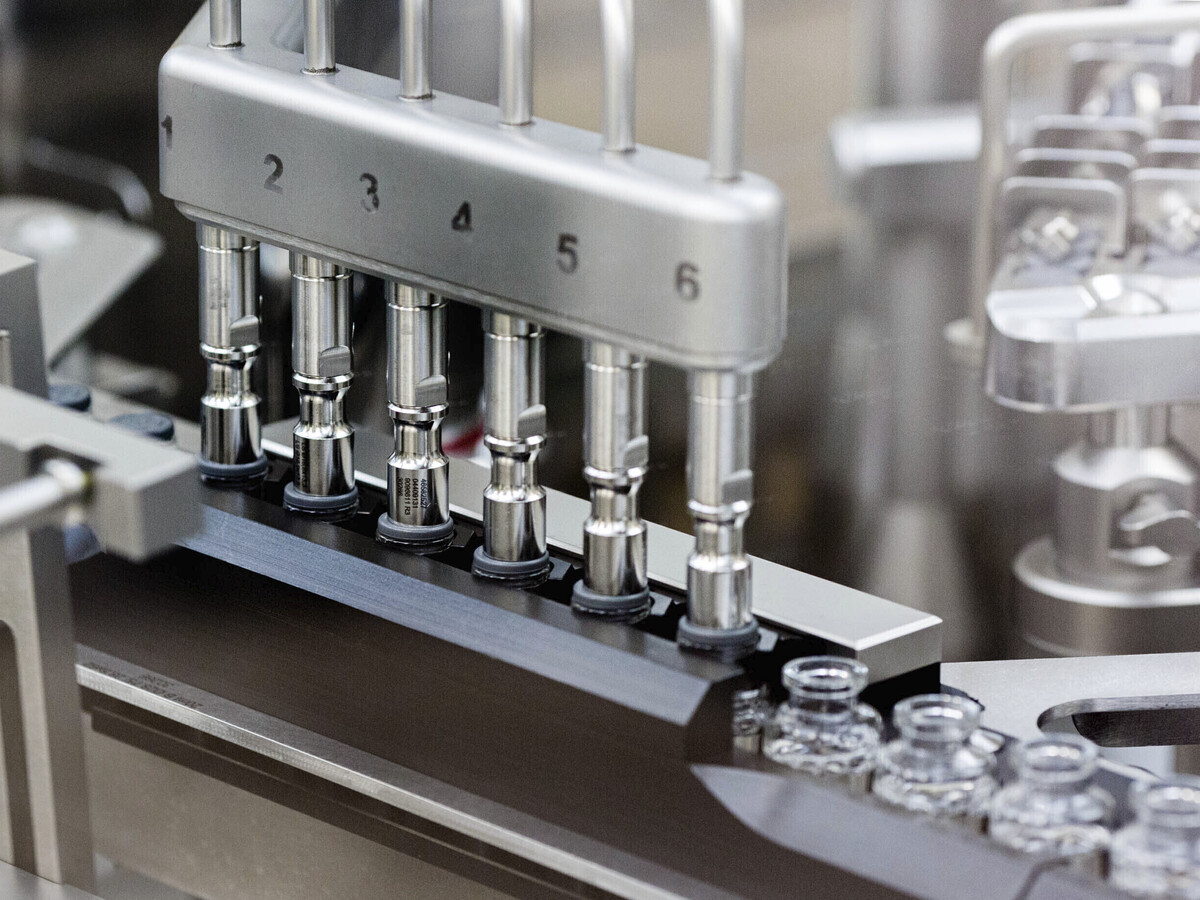 Stoppers are placed on filled vials of the experimental drug remdesivir at a Gilead Sciences factory.

States are beginning to receive cases of an experimental COVID-19 drug that the Food and Drug Administration authorized for emergency use on May 1.

But the distribution process so far has puzzled some hospitals and states about why they've been left empty-handed.

Gilead Sciences, maker of remdesivir, said it would donate its initial supply of the medicine. The federal government is in charge of coordinating where the treatment is to be shipped, with "hospitals in cities most heavily impacted by COVID-19" getting the top priority, according to a company statement.

But problems were soon apparent.

"We learned a lot of lessons from the remdesivir situation," FDA Commissioner Stephen Hahn said during a coronavirus hearing before the Senate Committee on Health, Education, Labor and Pensions on Tuesday. "More will be allocated according to methodology to get the drug where hospitalized patients are."

In the first week of May, a dozen states received nearly 50,000 vials of remdesivir, an intravenous antiviral drug, according to the Department of Health and Human Services.

Gilead pledged to donate its initial supply of the drug, or 1.5 million doses. Of those, 607,000 will go to the United States to be administered to about 78,000 people nationwide over six weeks, according to HHS.The department did not respond to requests for comment for this story.

While remdesivir remains experimental, it has been used to treat patients with COVID-19. A study funded by the National Institute for Allergy and Infectious Diseases found that remdesivir reduced recovery time for seriously ill COVID-19 patients in the hospital by about four days, as compared to a placebo. That result intensified interest in the treatment.

But in Senate testimony Tuesday, Anthony Fauci, director of the institute, stressed that the study's result for remdesivir "was statistically significant but really modest. And we must remember it was only a modest result showing that the drug made a 31% faster time to recovery."

The first remdesivir vials were distributed in two waves. One went out on May 5 directly to hospitals, and the other went out on May 7 to state health departments. AmeriSourceBergen is distributing the donated remdesivir, but has said that neither it nor Gilead had any say in where those doses went.

In Massachusetts, vials arrived directly at hospitals as part of the first wave of distribution. Dr. Helen Boucher, chief of the infectious diseases department at Tufts Medical Center, said health care providers were surprised at where they ended up.

"The initial allocation went to just four hospitals, and they did not appear to be four hospitals with the greatest need," she said in an interview with NPR. "It's just not clear to me what the process was and how they decided where a 'hot spot,' is to send the drug."

The hospitals that got the remdesivir decided to give it to the state health department, which reallocated it based on need, Boucher said. In the future, she said she hopes HHS can be more transparent about how it distributes the limited number of remdesivir vials.

In the second wave of distribution, Maryland experienced a different distribution scenario: The state was expecting to receive 1,600 doses of the medicine.

"We will be immediately deploying these initial doses to Prince George's and Montgomery counties, where we have the highest number of cases," Gov. Larry Hogan, a Republican, said during a May 6 press conference. "All of this puts us much closer to being able to launch stage one of our reopening."

According to the Maryland Department of Health, 1,200 doses went to the state health department on May 7, but they haven't been deployed yet.

Still, Gabor Kelen, an emergency physician who directs the department of emergency medicine at Johns Hopkins Medicine, says Hogan's announcement caused some concern. The sickest COVID-19 patients are often transferred to University of Maryland and Johns Hopkins hospitals in Baltimore, which is outside the two hard-hit counties.

"Our systems take care of a huge number of patients in the state at any one time, disproportionate to everybody else," Kelen says. "So it isn't quite right to send the drugs to smaller centers that aren't taking care of the most patients just because the smaller centers are in the hot spots."

New Jersey was part of both early waves of remdesivir distribution. The New Jersey Department of Health received 110 cases of remdesivir last Thursday and was still finalizing its allocation plans as of Tuesday afternoon, according to spokeswoman Donna Leusner. The state also got 94 cases earlier in the week, but those went to hospitals in the state. (Each case contains 40 single-dose vials of the medicine.)

"The Department factored in that two hospitals got direct shipments in the initial shipment to New Jersey," she said in an email to NPR. "We have advised and the federal government has agreed that all future shipments should be directed to the state."

Other states, like California, Pennsylvania and Florida, have experienced among the highest numbers of COVID-19 cases in the country, but they were not among the first to receive the donated remdesivir.

The California Department of Public Health said it was "working diligently to gather more information about the distribution process to ensure Californians have access to remdesivir." Meanwhile, in Pennsylvania, officials learned on Tuesday that they would receive an allocation, but it hasn't been announced by HHS yet.

Some hospitals have been told to use an online HHS portal to report every week on how many COVID-19 patients they have and how many are in the ICU. This, they've been told, will help a federal team led by Dr. Deborah Birx, White House coronavirus response coordinator, to decide where to send the donated supply of remdesivir.

Several medical societies and members of Congress have called for greater transparency regarding the remdesivir distribution process.

"HHS distribution of remdesivir seems akin to winning the lottery — a random stroke of luck rather than a medically-informed decision," Reps. Lloyd Doggett, D-Texas, and Rosa DeLauro, D-Conn., wrote in a May 13 letter to Health and Human Services Secretary Alex Azar. They're asking for more information on how the allocation decisions are being made and "a transparent process" for the distribution of the COVID-19 treatment.