Accessibility links
Coronavirus Testing Is Easy To Find In Tennessee — And The State Pays For It : Shots - Health News As states move on from social distancing, they need plenty of coronavirus testing to prevent future outbreaks. But many communities face testing bottlenecks. Tennessee has a solution. 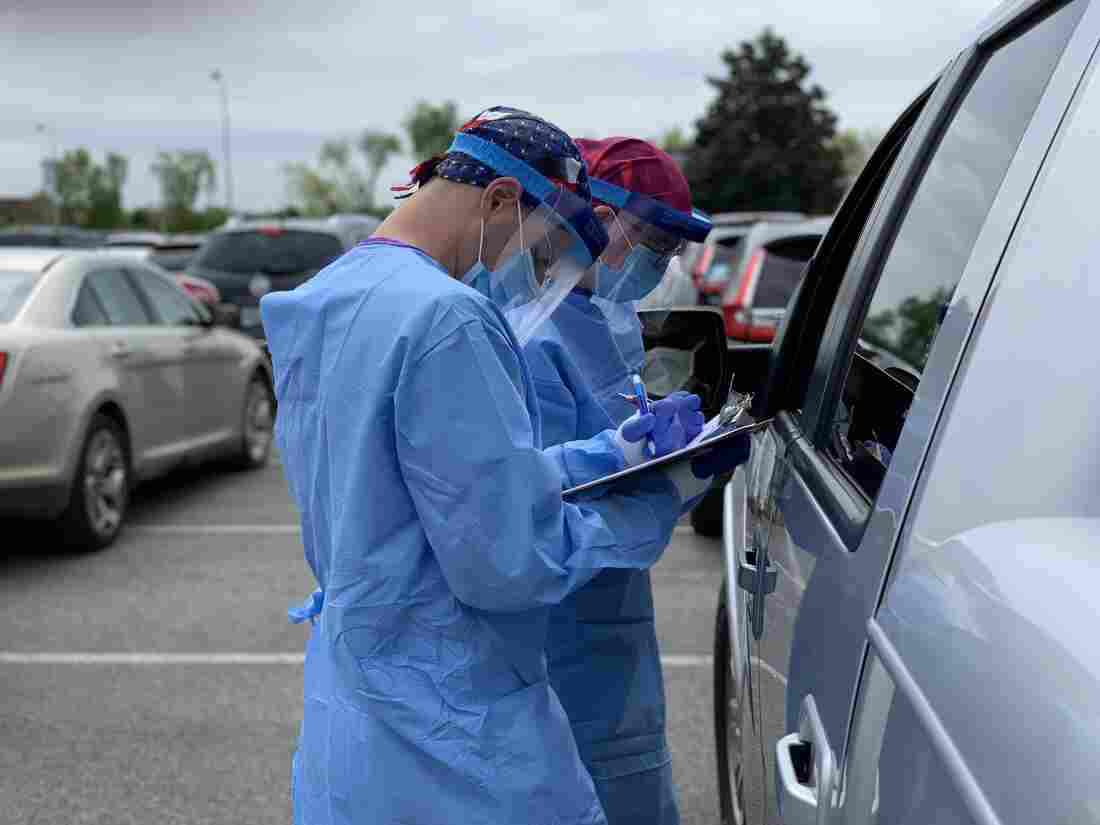 A nurse and National Guard medic interview a patient before taking a swab for a coronavirus test last month at Gallatin High School in Gallatin, Tenn. The state of Tennessee started picking up the tab for testing in April. Blake Farmer/WPLN hide caption 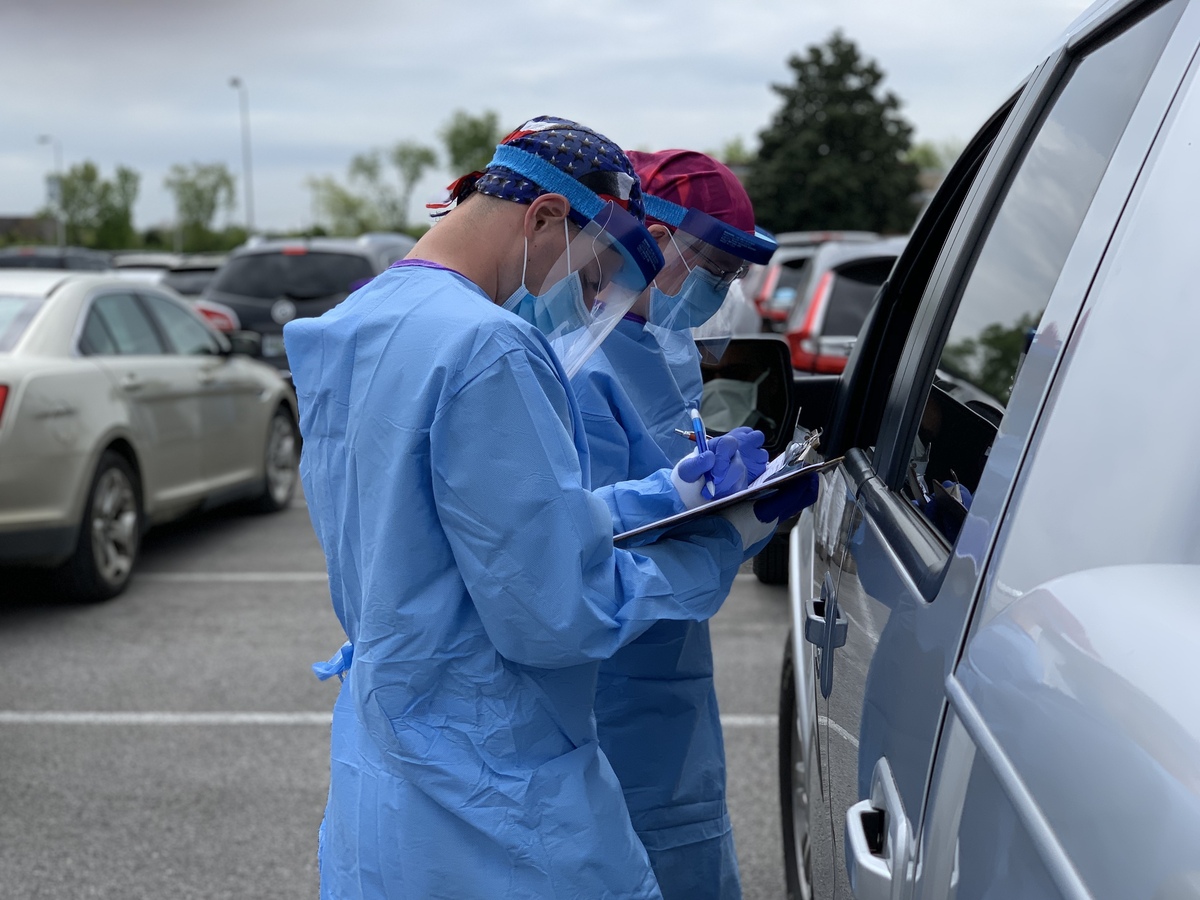 A nurse and National Guard medic interview a patient before taking a swab for a coronavirus test last month at Gallatin High School in Gallatin, Tenn. The state of Tennessee started picking up the tab for testing in April.

To reopen businesses and public spaces safely, experts say states need to be testing and contact tracing on a massive scale. But only a handful of states are doing enough testing to stay on top of potential outbreaks, according to a state-by-state analysis published by NPR.

Among those, Tennessee stands out for its aggressive approach to testing. In Tennessee, anyone who wants a test can get one, and the state will pick up the tab. The guidance has evolved to "when in doubt, get a test," and the state started picking up the tab in April.

It's still rare for a community to encourage such broad symptom-free testing.

"In most places, you still need to show you have the signs and symptoms of COVID-19 to get a test," research professor Sabrina Corlette of Georgetown University says. "It's really patchwork."

Ample testing, preferably including people who are not symptomatic, can help contain future outbreaks of COVID-19 by giving health officials the knowledge to act quickly to suppress any new cluster of cases.

Because of testing shortages, many states still have limitations on who can get a test. Some states such as Alabama are inviting people without symptoms but only if they qualify as high risk. A few counties in Nevada have started asymptomatic testing, and Rite Aid in a dozen states has opened up its walk-in testing, but it's still for folks who preregister.

Tennessee's commitment to testing so broadly has helped it pull ahead of most other states in its rate of testing. According to NPR's analysis, Tennessee is doing more than double the minimum number of tests needed to control its outbreak.

"We've called on almost all of them to say, 'We need you to ramp up because you're about to get a flood of tests,' and that's exactly what we've given them," Piercey said at a daily briefing in late April.

But private labs are shouldering the testing load in most states. What's somewhat novel in Tennessee is that the state guaranteed payment to those companies upfront.

So rather than making them bill various health insurance plans — which are required to cover coronavirus testing but still create paperwork — the state is picking up the tab. And the typical rate set by the federal government just doubled to $100 a swab.

Memphis-based American Esoteric Laboratories has been processing the bulk of the state-collected swabs. The company declined to comment for this story.

Nashville-based Aegis Sciences Corp. jumped in more recently and is already doubling its capacity to 7,000 tests a day. CEO Frank Basile says the guaranteed payment was a big motivator.

"Clearly, it's beneficial for the lab companies like us to receive the assurance of payment," Basile says. "That's definitely a positive. And it gives us the confidence to put the effort and the capital in to make this happen."

And coronavirus testing requires more investment right now because the swabs and chemicals necessary to do it are in such high demand.

The tax dollars are well-spent, says Dr. Ashish Jha, faculty director of the Harvard Global Health Institute, which has been tracking testing capacity by state. He says Tennessee's investment could more than pay for itself since ample capacity is seen as a necessity to reopen businesses. Jha says he's been recommending this approach to government officials across the country.

"If the state says they'll just pay everybody 100 bucks every time you do a test, that strikes me as very smart policy," he says.

Tennessee officials said they're banking on being reimbursed by the federal government at some point.

The Tennessee Department of Health doesn't know exactly how much it's on the hook for yet. But it's a tab that grows by millions of dollars a week. Aside from weekend drive-through events, the state is also paying to process the weekday testing being done by local health departments in 95 counties.

On a recent Sunday more than 800 people were tested at one site in Hendersonville, Tenn. Christine Garner was willing to wait in her minivan as she slowly moved through the parking lot of a local high school. "I said, 'I know there will be a long line, but we'll just sit and wait.' We charged our tablets, and I'm doing sight words with the kids," she says.

Garner closes refinanced mortgages for a living, which puts her in close contact with multiple families a day — often in their homes. Still, she had no symptoms. And her closest contact to someone with COVID-19 was secondhand.

"I'm just hypersensitive to any change in my body at all. I think a lot of people are," she says.

All this testing access is generally a good thing, says Dr. Kelly Moore, a pandemic consultant, formerly of the Tennessee Department of Health. She refers to the test takers as primarily "the worried well" since nearly 99% of them have tested negative at some testing events.

"If these highly motivated, worried well people, coming out for free tests, are not taking up scarce resources we need for someone else, then it's definitely not a problem to test them," Moore says.

But there's a potential downside. All those negative test results improve a state's closely watched positivity rate — that is the percentage of cases coming back positive. A low rate of positives is seen as a sign that a community is doing enough testing. But it's possible to be missing pockets of infection among people who might not have the awareness or resources to get tested.

"We can't draw conclusions about what's going on in the whole community based on this self-selected group of people who are so motivated they come out to get tested," Moore says.

This story is part of NPR's health reporting partnership with WPLN and Kaiser Health News.