Accessibility links
For Some LGBTQ College Students, Sheltering At Home With Family Can Be Traumatic : Shots - Health News For many young people, going to college allows them to finally express their sexual orientation or gender identity. Now with schools closed, many are suffering with families that don't accept them. 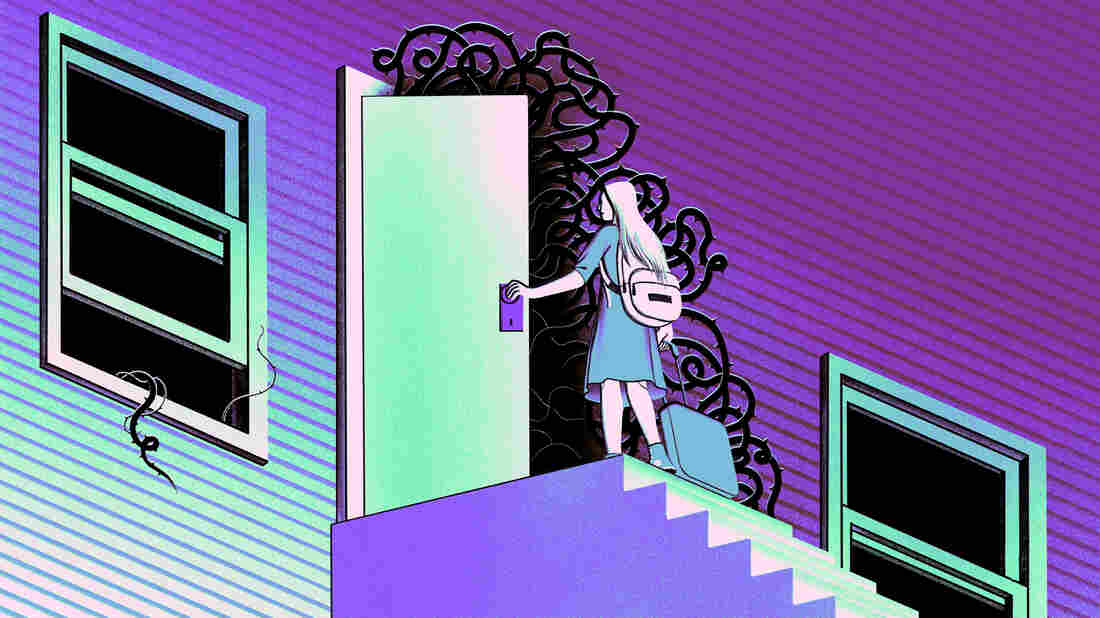 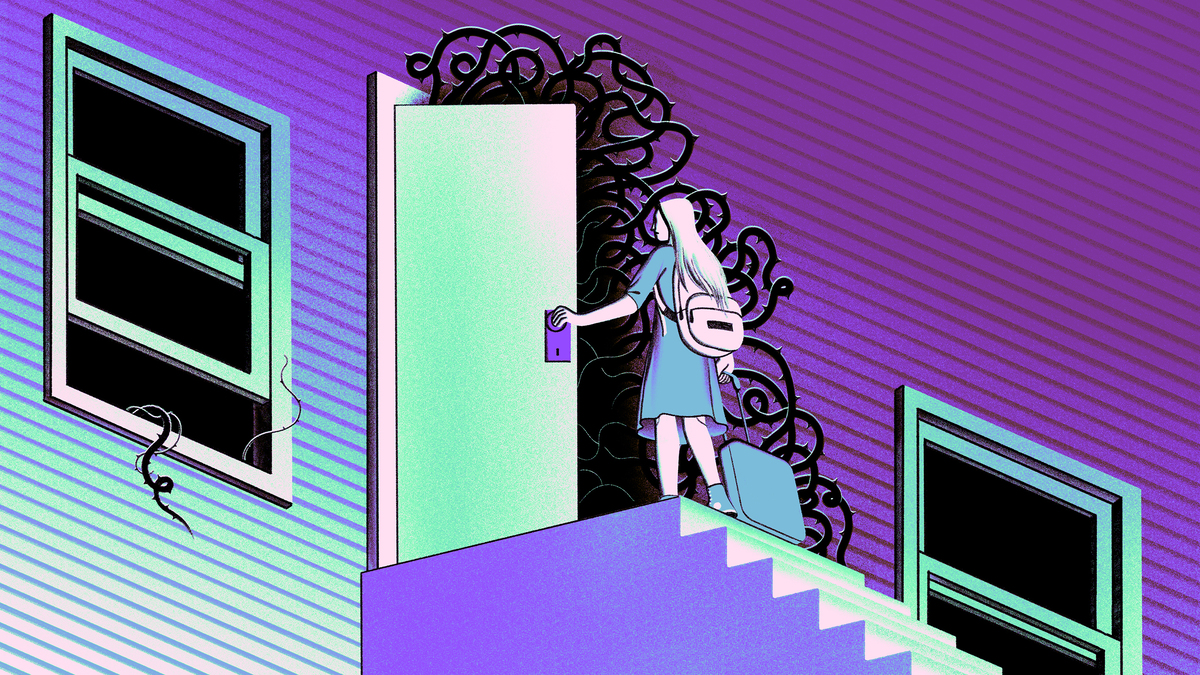 Staying home and sheltering in place can be stressful for everyone. But for some college students who identify as LGBTQ, returning to family environments can be very difficult and even psychologically damaging, psychologists say.

"A lot of young people when they make it to college are able, for the first time, really, to live their truth," says psychologist Megan Mooney who works with children, teens and young people and specializes in preventing and treating trauma in LGBTQ youth. Mooney is also President of the Texas Psychological Association. Now, many young people are forced to stay in a home setting that forces them to hide their identity again. And even when stay-at-home orders start to lift, most dorms are closed, and colleges may stay closed for summer and and even fall terms

For many of these young people, Mooney says, college is a refuge from years of rejection and discrimination in high school and even from family members.

"The vast majority of LGBTQ youth in high school experienced name calling on a regular basis, the kinds of names I don't even like to repeat because they are so offensive," Mooney says. In addition, school policies often prohibited the type of clothing they wanted to wear, the restrooms they could use, athletic events they could take part in, as well as participation in special celebrations like prom with their partners.

Returning to the family home can be traumatizing all over again, she says, especially if parents or siblings reject them or are even hostile. She says LGBTQ young people have a high likelihood of having experienced a lot of trauma and stressful life events already; that means the impact of returning to an unsupportive home is dramatically magnified.

"So what we are most concerned about is seeing increases in anxiety and depression including suicidality," Mooney says.

Suicide and crisis hotline calls are now on a rapid rise at The Trevor Project, a large suicide prevention and crisis intervention organization for LGBTQ young people. CEO Amit Paley says that since the onset of COVID-19 the volume of youth reaching out to The Trevor Project's crisis services program has increased dramatically at times spiking to more than double the volumes from earlier in 2020.

"There are just so many young people who are impacted and scared and frightened and in unsafe or challenging situations and many of them are reaching out for help and to talk about what they are going through," he says.

A college senior, Mia says that at school she could finally "be herself" complete with a gay pride flag in her apartment. Her friends are accepting and "feel like family" she says, "they love me for who I am." (NPR is not using her last name because she fears being ostracized by her family if they found out about her sexuality.)

But her parents are evangelical and the message they gave her, she says, is "you can't be gay; you have to leave that at the cross if you want to be a Christian."

Mia says her Dad is very angry and frustrated with her, and she thinks he suspects that she is gay. She says she fears that if they knew she was lesbian she would be disowned.

She decided to shelter at a friend's parents house because it was not an emotionally toxic place for her. Her friend's parents "are not abusive and they allow you to have different opinions from theirs. They do not care that I'm gay. I am accepted no matter what."

Even so, she is saddened that she can't be home with her own family. She misses them, especially her mother. She says they have "always been a big part of my life."

The impact on the young person ranges from feelings of guilt, shame or fear to worries about their physical safety. Paley says parents might not realize that these types of rejecting behaviors can put the young person in danger. "In fact, the emotional damage that rejecting parents can have is enormous," he says.

Paley points out that LGBTQ youth who have rejecting families are eight times more likely to attempt suicide than those who do not have rejecting families, according to a study published in 2009 in the journal Pediatrics. Conversely, a recent Trevor Project survey found that just having one supportive adult in a young person's life reduces their risk of suicide by 40%.

"And that's why we really want to make sure that every adult and every family member is really thinking about how they can come from a place of love and support and acceptance because it can literally save lives," he says.

Leaving accepting college environments, Paley says, can be especially painful for those who are transgender. "You're forced back into this home environment where not only you don't have those normal sources of support but you may have parents who are calling you by a name that is different than the name that you are using in most of your life, who may be referring to you with gender and pronoun markers that are not who you really are" and that can be incredibly difficult, Paley says.

Of course, there are families that are accepting and supportive, he says, and some that are "trying their best." But there are heartbreaking stories, he says, of extreme rejection and hostility. "We hear stories about parents who say things to their children that you couldn't possibly imagine someone could say," he says.

For example, Paley recently took a call from a young person who told him they had just come out to their father and the father said, as Paley recalls, "you are an abomination before God, you are a disgrace to this family and I will not accept you for being who you are." When you hear something like this, says Paley and "you can't help wondering how a parent could reject their own child's authenticity."

He says they routinely hear about parents who say they no longer want the child "under this roof" and, especially in the case of transgender children, refuse to call them by their chosen name and even force them to dress in a way that clearly doesn't correspond with their gender identity.

The risk of mental health problems for LGBTQ youth is further exacerbated because they can no longer interact on a daily basis with all those people in the college community who were supportive. "And now they don't have any of those sources of support, at least physically and they're with people who don't accept them, which leaves a lot of young people feeling completely alone," Paley says. The disparity between how good and supported these young people felt before and how lonely and rejected they might feel at the moment makes the situation even more painful.

Physical distancing does not mean social isolation, he says. Young people may be in a small living space that is not supportive but Paley encourages them to reach out to people who are supportive, whether that's other family members, friends, teachers or organizations like the Trevor Project.

Maintaining social connection is critically important during this crisis, says psychologist Mary Alvord who specializes in teaching resilience and has co authored two books on the topic. There's a big difference between being alone and being lonely, she explains.

"You can be alone and be OK with it, maybe even feeling a sense of calm," she says. "The problem is when you feel lonely you feel like you don't have the support out there, you don't have the connections and it's a feeling of being sort of an island unto yourself without somebody there to have your back."

Social connection is one of the key protective factors in resilience, she says. "First we need to remember that we're not alone and if we can get support from others and talk with others again, we get perspective and we get the validation of who we are and what we want and what we think is important."

Luckily in today's world, online venues for connection are plentiful, she says. Young people "need to connect with a community or at least with friends who accept them for who they are and share their value system," says Alvord.

And it's important to remember, she says that the hopelessness many young people may feel now is not going to last forever. Social distancing will let up, schools will open again sooner or later, and eventually the pandemic will end. "When we have moments to ourselves we can actually remember the times when we were in a good place and in a good space and our identities were affirmed; and really keep that in mind that we can go back to that," she says.