Accessibility links
Doctors In Training Learn Hard Lessons During The Pandemic : Shots - Health News There are some 130,000 medical residents in the U.S., and many are pulling long shifts in emergency departments and ICUs treating patients infected with the coronavirus.

3:57
Doctors In Training Learn Hard Lessons During The Pandemic 3:57 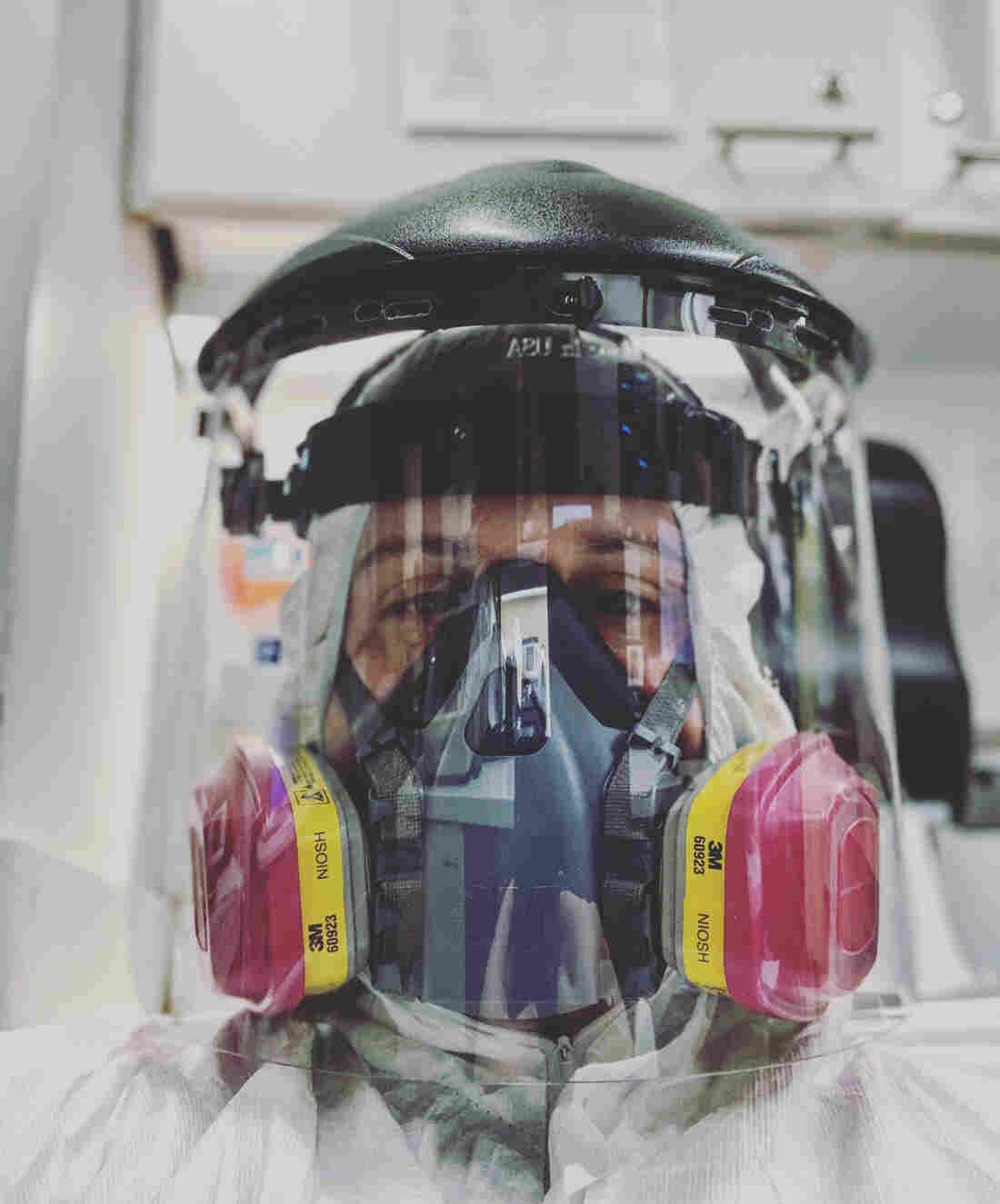 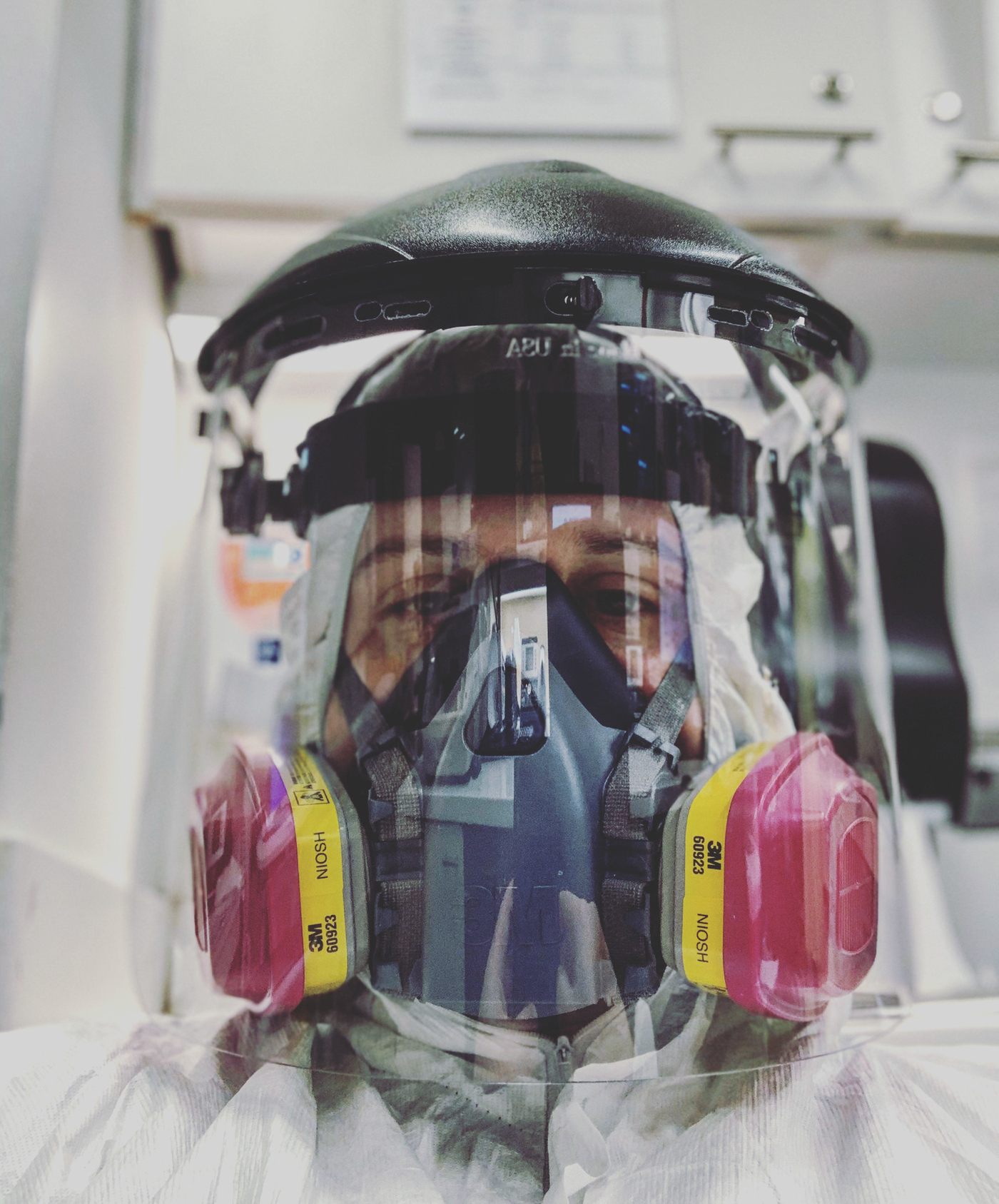 Dr. Max Lazarus, a medical resident at a hospital on Long Island, N.Y., is one of some 130,000 medical residents in the U.S., many of whom have found themselves on the front lines of the COVID-19 pandemic.

The coronavirus is leaving a lasting impression on a generation of young doctors.

In the U.S., there are some 130,000 medical residents — doctors in their final years of training after medical school — who make up a vital part of the workforce.

Now a global pandemic has become the centerpiece of their training.

Many are pulling long hours in emergency departments and intensive care units treating patients infected with the coronavirus, all while witnessing the health care system under unprecedented stress.

Their schedules are transformed. Family members must keep their distance. And some of the hallmarks of their clinical training suddenly feel tenuous.

Many recognize the pandemic as a formative moment, both for health care and their own careers. Some say it's also magnifying existing concerns about labor and mental health among doctors in training.

Lin already knew how to manage a patient on a ventilator, when to adjust the settings, what to do if the person's kidneys needed help.

So much changed for him the day that coronavirus patients first streamed into his hospital, though.

"Every person that rolled in: tubed, unstable, respiratory failure, COVID ... anyone, young, old," he says. "It was just a deluge."

From then on, Lin was treating these critically ill patients all the time, week after week, as New York City hospitals saw a crush of coronavirus patients in March and April.

Lin soon discovered that some of the clinical know-how he had accumulated over years of training no longer applied in the same way to COVID-19. Instead of improving, patients would linger in the ICU for weeks, their recovery uncertain.

"You are trying to do something, and nothing is working," he says. "Now whenever I see someone intubated, you just know, 'Oh my God, they are probably going to die.' "

Day after day, Lin had the unsettling experience of leaving the hospital unsure of whether his efforts to help patients actually made a difference. "It has just been incredibly disheartening," he says.

Another challenge is that even Lin's attending physicians — the seasoned doctors who train him — don't have all the answers either.

"These leaders in critical care who I respect so much, they're telling me like, 'We don't know,' " he says. "That's terrifying."

"It reminds you there are always going to be things in medicine that you will never know," Lin says.

In Baltimore, Dr. Martha Frances Brucato, a second-year resident in pediatrics and internal medicine, says much of her education has emphasized that family members should be closely involved in a patient's care. But now hospitals generally bar visitors because the coronavirus is so contagious. 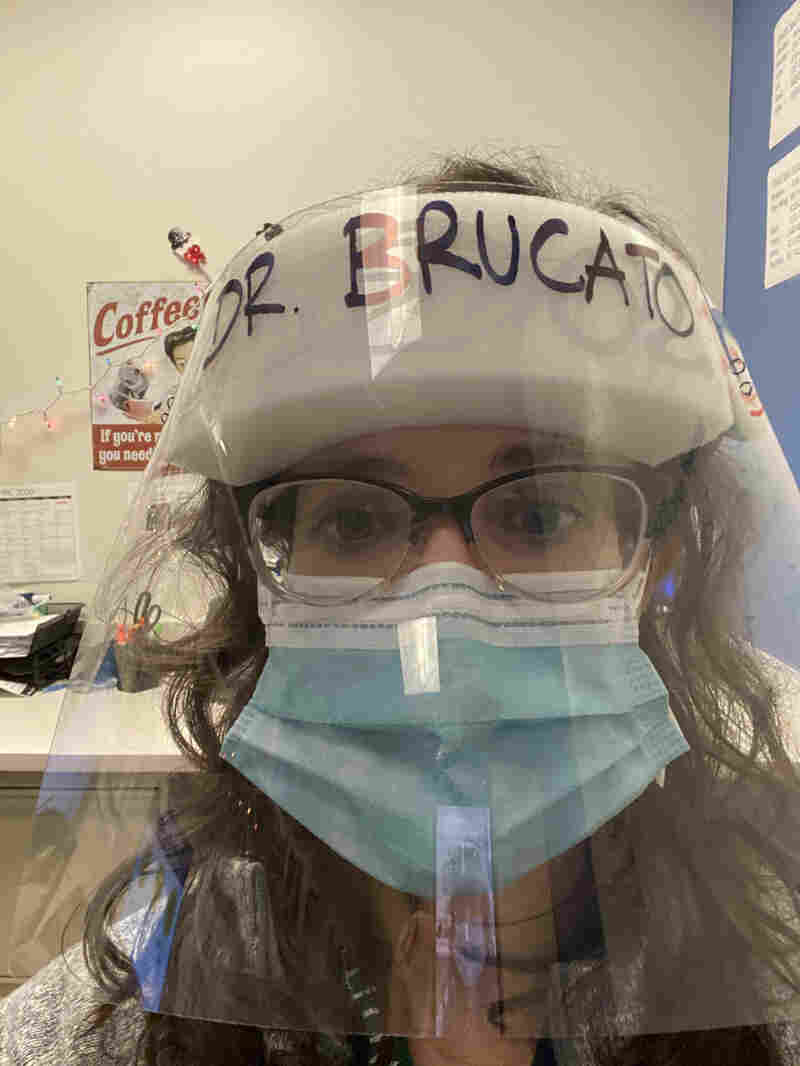 "The really hard part of our jobs right now is how alone our patients are by necessity," she says.

The pace is different too. She can't rush to a patient's bedside without first putting on layers of protective gear: "That immediacy is such a part and parcel of ICU care, typically."

For many residents, the risk to their own health has never felt so immediate either.

Before working in the ICU with COVID-19 patients, Brucato made sure to remind her husband of her own medical wishes.

"Remember that I have a living will," she told him. "I would want to be ventilated as long as there was a chance for meaningful recovery."

That does not mean Brucato hesitated to be on the front lines of the pandemic.

In fact, she volunteered for the assignment.

Dr. Brendan McEvoy, an emergency medicine resident in Chicago, also jumped at the chance to work on COVID-19 in the ICU.

Then he caught the virus.

"There were a lot of people that were very concerned for me," he says.

It was nerve-wracking initially, he says, because he had seen otherwise healthy young people on ventilators during his shifts.

Soon after his recovery, he was put on a dedicated intubation team in the hospital.

"I hope we are going to look back at this like, 'How were we all not better prepared?' "

For some residents, the pandemic is amplifying long-standing concerns about working conditions.

"It is really bringing to light a lot of the ways that residents have been mistreated for years," says Dr. Amy Plasencia, executive vice president of the Committee of Interns and Residents, a union representing more than 17,000 doctors in training.

Before the pandemic, the Committee of Interns and Residents was pushing for a bill of rights that focused on better pay, sick-time policies and other protections for residents.

"Now is the time that we most need those protections," says Plasencia, a resident at a hospital in Brooklyn, N.Y. "Because residents are really at the forefront doing so much of this work, they are in very large numbers becoming ill."

Generally, residents are reluctant to speak publicly out of concern that doing so could jeopardize their job and professional future. Since the pandemic began, more are taking to social media to air concerns about working conditions.

Medical residency is essentially a prolonged apprenticeship that generally stretches from three to seven years. Residents are expected to put in long hours as part of their education. The average salary is about $60,000 per year.

At the University of Washington, the union representing doctors in training is wrestling over a contract with the hospital system in an effort to get better pay and benefits.

"People can't work 80 hours a week, see really horrible things all day [and] not have access to mental health care, without having some sort of burnout," says Dr. Zoe Sansted, who is vice president of the University of Washington Housestaff Association.

Sansted, a family medicine resident in her third year, was assigned to work in the ICU as the pandemic spread in Seattle.

She says many residents are eager to work extra hours and be on the front line.

"These are wonderful instincts," she says. "Doctors are obsessed with professionalism, but it's also ripe for exploitation."

Before the pandemic, Dr. Murad Khan was already a bit nervous about his internal medicine rotation.

Khan is a psychiatry resident in his first year, known as an internship, at Yale New Haven Hospital. Suddenly his rotation coincided with a surge of COVID-19 patients.

Rules were changing constantly. At first, he says, it wasn't clear what residents would be asked to do or whether there would be enough personal protective equipment. 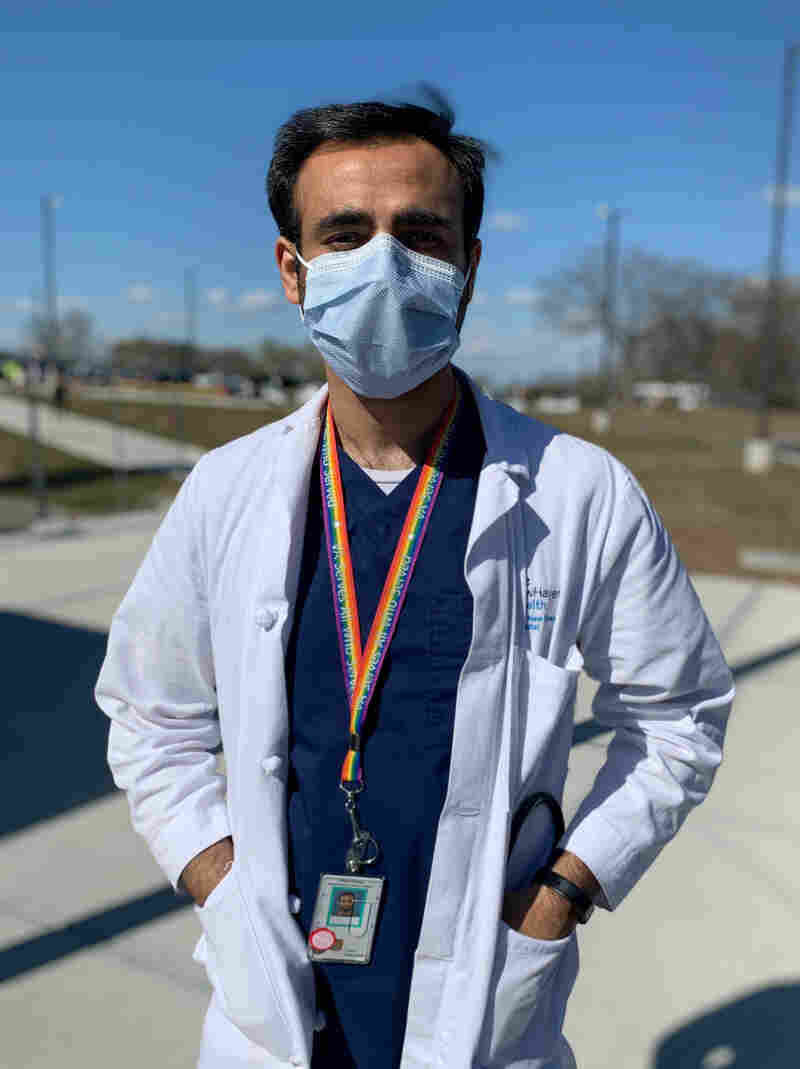 "Initially, things were pretty frantic," Khan says. "I actually spent a lot of the first couple weeks having a hard time sleeping before going into work."

Khan says he found himself on edge, concerned that a COVID-19 patient would crash and he wouldn't know how to respond.

"There is something traumatic just about not knowing how sick a patient might get at any moment," he says.

Khan is much more comfortable working with coronavirus-infected patients since those early days of the pandemic in Connecticut. But he recognizes the psychological toll of caring for these sick patients, often being the only connection between them and their families.

Khan says the coronavirus has only underscored existing problems in American health care, from racial health disparities to the demands placed on medical residents.

"There was already an issue around how much residents work and how much they are supervised and whether or not that's good for their mental health," he says. "That's even worse now."

For many residents, the legacy of the coronavirus may be the emotional weight of so much unmitigated loss.

Dr. Max Lazarus, a resident at a hospital on Long Island, N.Y., went into emergency medicine exactly so he could respond to crises.

He remembers pushing stretchers around the lobby of Bellevue Hospital as a volunteer in the emergency room during Hurricane Sandy.

"This is what I signed up for," he says. "It forces you to grow in a way that I don't think anything else could." 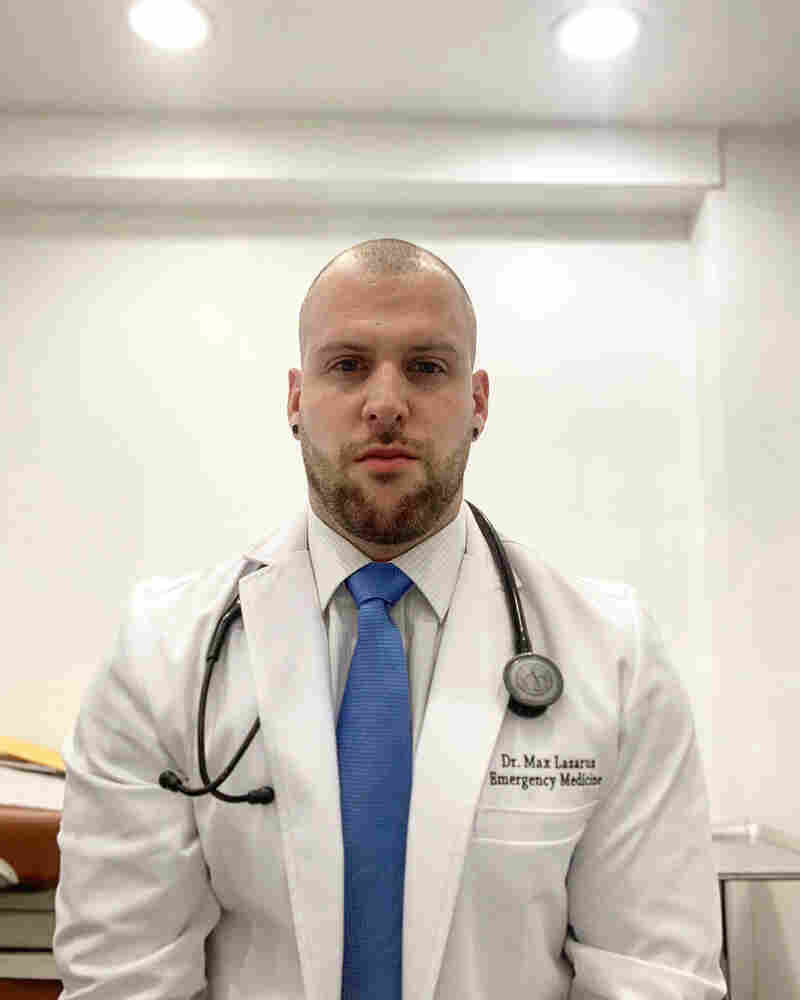 Dr. Max Lazarus, a medical resident at a hospital on Long Island, N.Y., went into emergency medicine so he could help during crises. "This is what I signed up for. ... It forces you to grow in a way that I don't think anything else could." Max Lazarus hide caption

But Lazarus says nothing could fully prepare him to watch patients call their family members before going on a ventilator.

"You tell them that hopefully they will wake up but there is a chance they may not," he says. "It's not the way anyone should die, alone on a ventilator."

Lazarus, 29, still thinks about two patients he treated early in the pandemic — one was a bit younger than he is, the other a bit older.

"And they died," he says. "They really stick out."