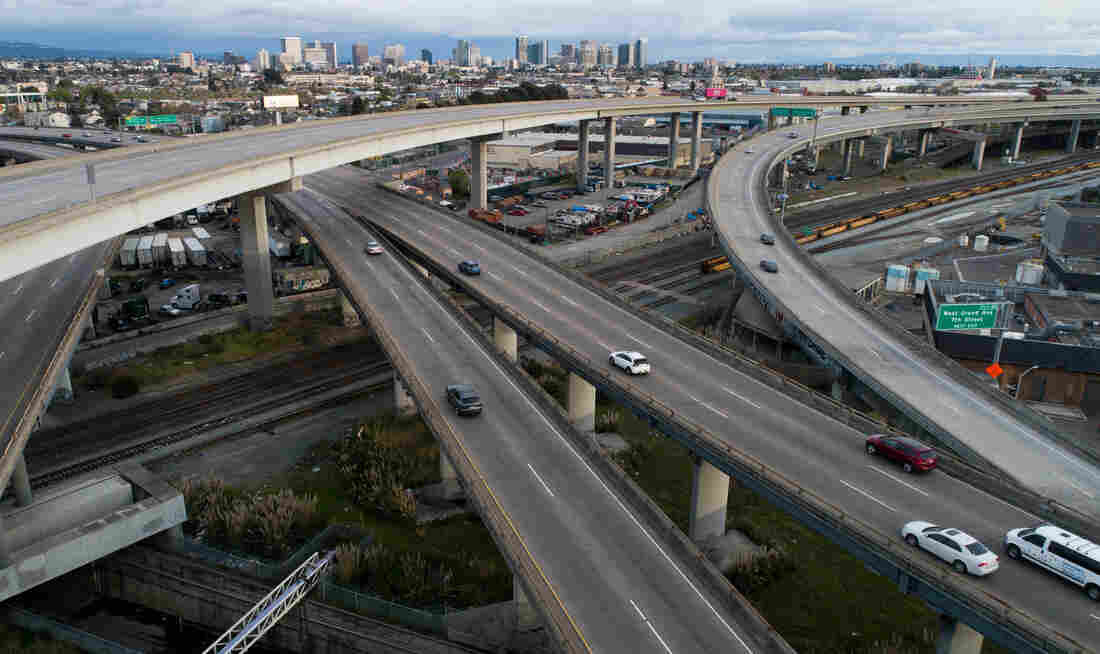 Freeways in Oakland, as in much of California, saw much lighter traffic — and fewer fatal traffic collisions — in the early weeks of the pandemic's stay-at-home rules. Jane Tyska/Digital First Media/East Bay Times via Getty Images hide caption 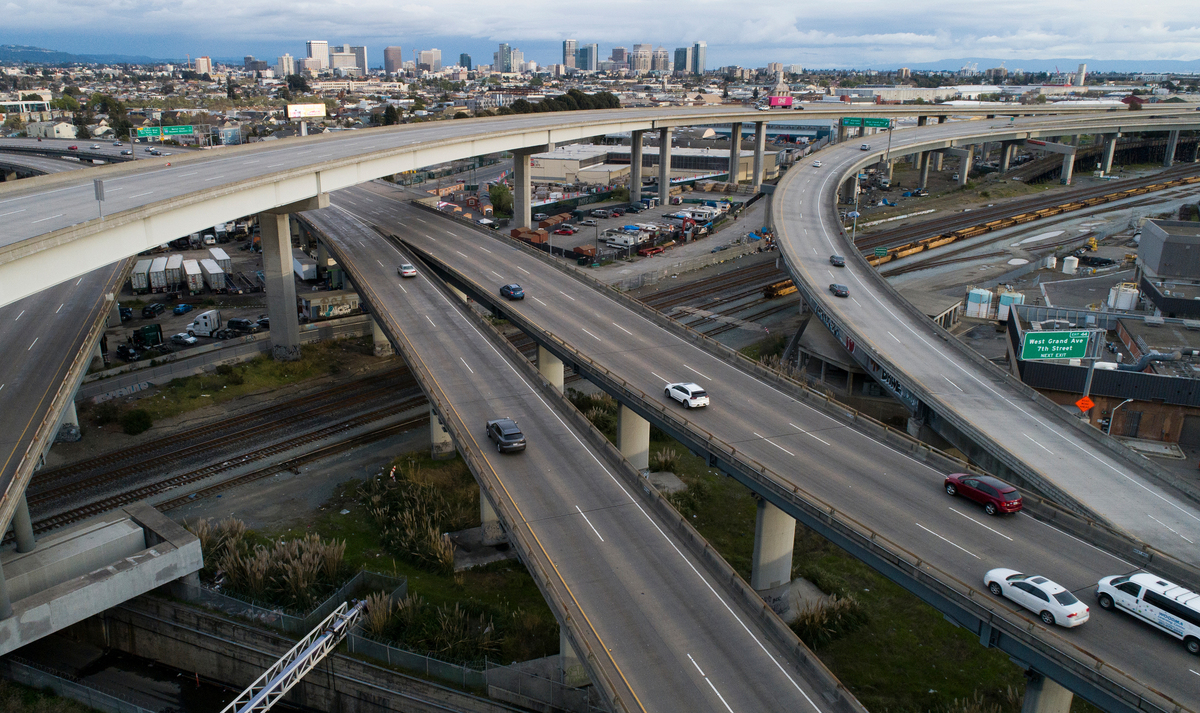 Freeways in Oakland, as in much of California, saw much lighter traffic — and fewer fatal traffic collisions — in the early weeks of the pandemic's stay-at-home rules.

On Day 2 of the San Francisco Bay Area's stay-at-home orders in March, Nohemi Jimenez got into her car in San Pablo, Calif., waved goodbye to her 3-year-old son and drove to her regular Wednesday dialysis appointment.

The roads were deserted. No traffic. Jimenez says it is hard to admit what she thought next: No traffic meant no car crashes. And that meant she'd be on the waiting list for a kidney transplant even longer.

Jimenez, who is now 30 years old, was 20 and pregnant with her first child when doctors discovered she had been born with only one kidney, and that lone kidney was failing. By age 29, doctors told her she needed a new one. It was strange and scary, she says, waiting for someone to die so she could live.

"You're just thinking about it," she says. "It's sitting in your mind. It just can never leave you alone."

Deaths from motor vehicle crashes and fatal injuries are the biggest source of organs for transplant, accounting for 33% of donations, according to the United Network for Organ Sharing, which manages the nation's organ transplant system. 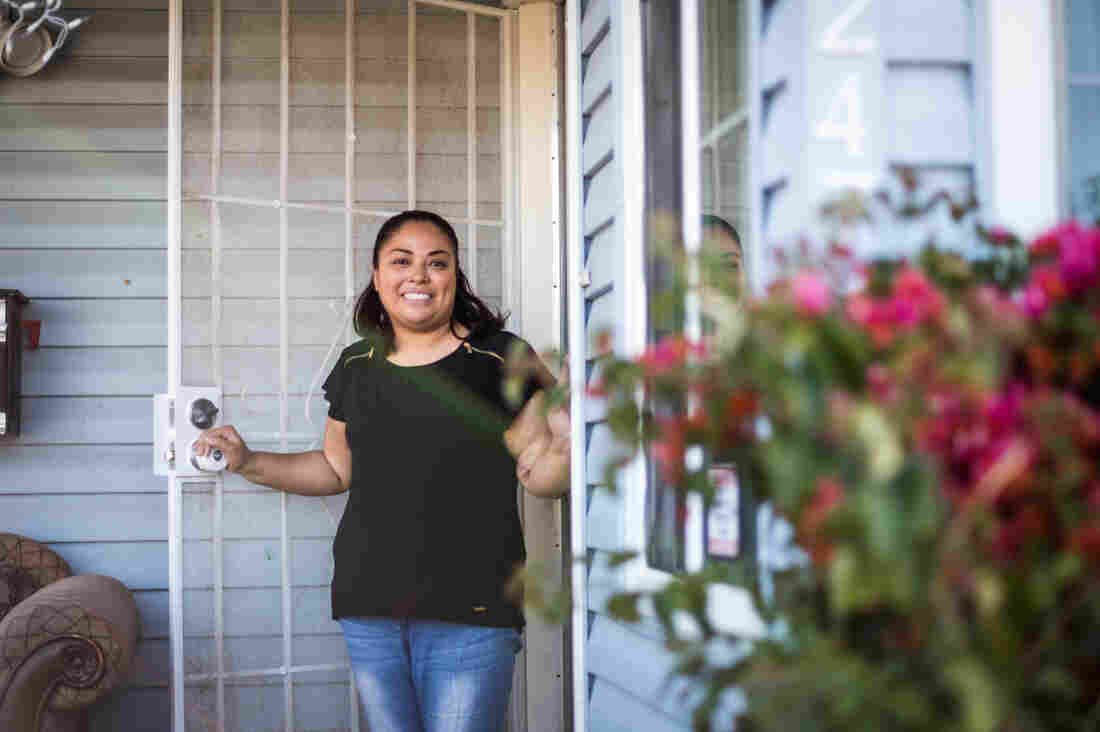 Nohemi Jimenez at her home in San Pablo, Calif. on April 28. Jimenz received her kidney transplant in the middle of the pandemic, but many others in need are still waiting. Beth LaBerge/KQED hide caption

But ever since the coronavirus forced Californians indoors, those accidents have declined. Traffic collisions and fatalities in the state dropped by half in the first three weeks of shelter-in-place restrictions, according to a study by the University of California, Davis. Drowning deaths dropped 80% in California, according to data compiled by the nonprofit Stop Drowning Now.

A Surgeon Reflects On Death, Life And The 'Incredible Gift' Of Organ Transplant

In April, organ procurement organizations typically see a surge in donations related to outdoor, spring break-related activities and travel, but not this year.

From March 8 to April 11, the number of organ donors who died in traffic collisions was down 23% nationwide compared with the same period last year, while donors who died in all other types of accidents were down 21%, according to data from UNOS.

Doctors say they've also noticed a decline in emergency room visits overall, not just for accidents, and this may also be limiting the supply of donor organs.

At Kaiser Permanente medical centers in Northern California, where 4.4 million patients get care, weekly hospital admissions for heart attacks have dropped almost 50% since the region's first COVID-19 death was reported in early March.

Strokes and heart attacks are the second and third most common sources of organ donations, accounting for 27% and 20% of organs, respectively, according to UNOS.

When people die from a stroke or heart attack at home instead of a hospital, their organs cannot be used for transplant because of lost blood flow. Most organ donations occur after a person suffers a near-fatal event and lifesaving measures do not work. For organs to be viable, people must die or be declared brain-dead while on a ventilator, so blood keeps pumping to the heart, lungs, liver and kidneys.

A range of other logistical complications have made transplants difficult during the coronavirus pandemic. Hospitals have had to scale back surgeries of all kinds to preserve scarce supplies of personal protective equipment and ventilators. And many haven't had the bandwidth to manage the delicate timing and complexity of organ donation, recovery, transportation and transplantation.

Transplant surgeries across the country plummeted 52% from March 8 to April 11, according to UNOS data.

"There are a lot of things that have to happen perfectly, and now we're in an imperfect situation where we're trying to deal with so many other things," Whaley says.

Earlier in the pandemic, as medical centers braced for a wave of COVID-19 patients, they wanted to free up as many ventilators as possible. In addition to donors needing to die on ventilators to keep their organs viable, doctors often keep them on ventilators for two or three days while transplant teams and recipients are lined up. Then the recipients need to be on ventilators during surgery.

"People were very antsy about having non-COVID-19 patients on ventilators, taking up space," Whaley says. "They wanted to make sure they were ready for that next patient."

Many COVID patients who died had previously signed up to have their organs donated for transplantation upon death; but those organs were declined, out of concern that recipients could become infected, Whaley says.

And a shortage of coronavirus testing supplies made it difficult for transplant centers to test potential donors who later died of other causes to make sure they were not infected with the virus.

"So there may have been some organ turndowns that we normally wouldn't have seen," says Dr. Chris Freise, a professor and transplant surgeon at UCSF.

As a matter of policy, hospitals canceled virtually all organ transplants from living donors — procedures that involve a family member or someone else donating a kidney or section of their liver.

"That involves bringing two patients into the hospital — the donor and the recipient — and we certainly didn't want to put donors at any significant extra risk," Freise says. "Living-donor kidney transplants ground down to almost a complete halt in most programs across the country."

Some hospitals began doing living donations again in early May, while donations from deceased donors started to increase slowly in mid-April.

That's when Jimenez got her call from Freise's team at UCSF. A condition related to Jimenez's three pregnancies made finding a donor match for her exceptionally difficult, Freise says — "like a needle in a haystack." That also put her at the top of the waiting list in case a match was found.

On April 17, Jimenez's phone rang at 2 a.m. A transplant staffer told her to get to the hospital right away.

"I was excited," Jimenez says. "But then my mind hit me: Somebody died."

All she knows is that the donor was 19 and died in an accident in Los Angeles. Jimenez wrote a letter to the donor's family.

"I told them that I will forever be thinking of them," she says. "I will have him or her in my body for the rest of my life, and I will live for both of us."

Jimenez has six months of recovery ahead of her. She says she's looking forward to going back to work and having more energy to play with her kids.

This story comes from NPR's reporting partnership with KQED and Kaiser Health News.