Accessibility links
Antibody Testing Is Increasing, But A Positive Result Doesn't Prove Immunity : Shots - Health News As more and more people get tested for antibodies to the coronavirus, infectious disease specialists worry that those tested — and their employers — may not understand the limits of the results. 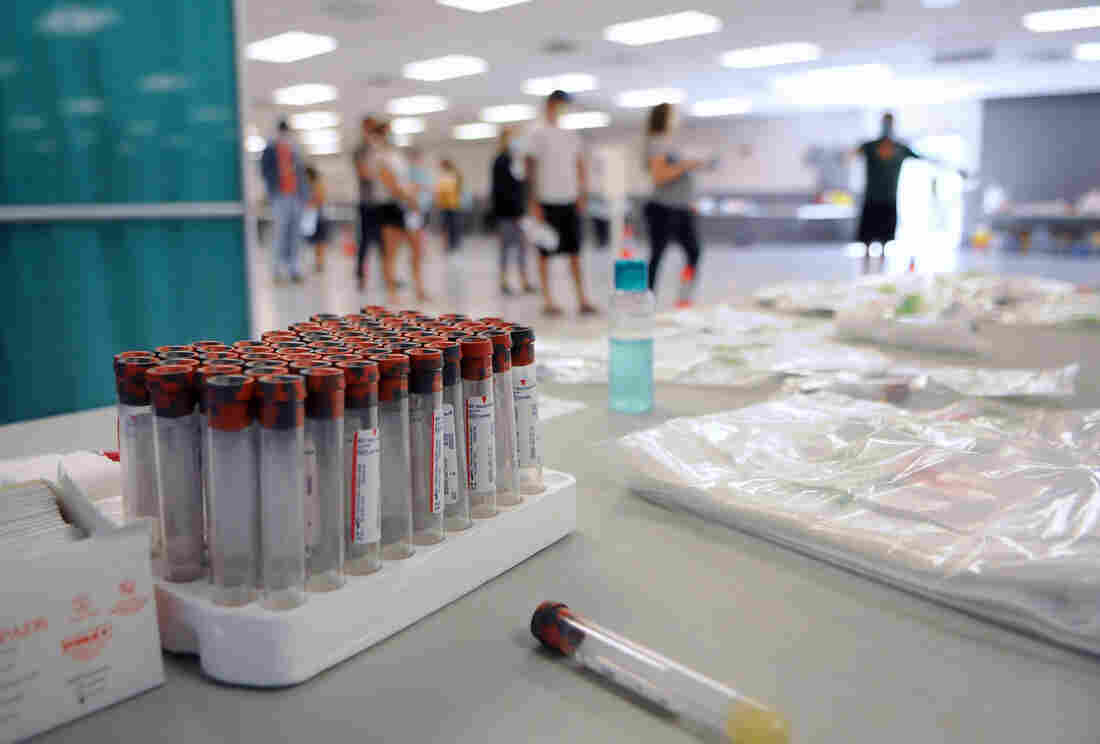 Blood collection tubes sit in a rack on the first day of a free COVID-19 antibody testing event at the Volusia County Fairgrounds in DeLand, Fla., on May 4. Paul Hennessy/Echoes WIre/Barcroft Media via Getty Images hide caption 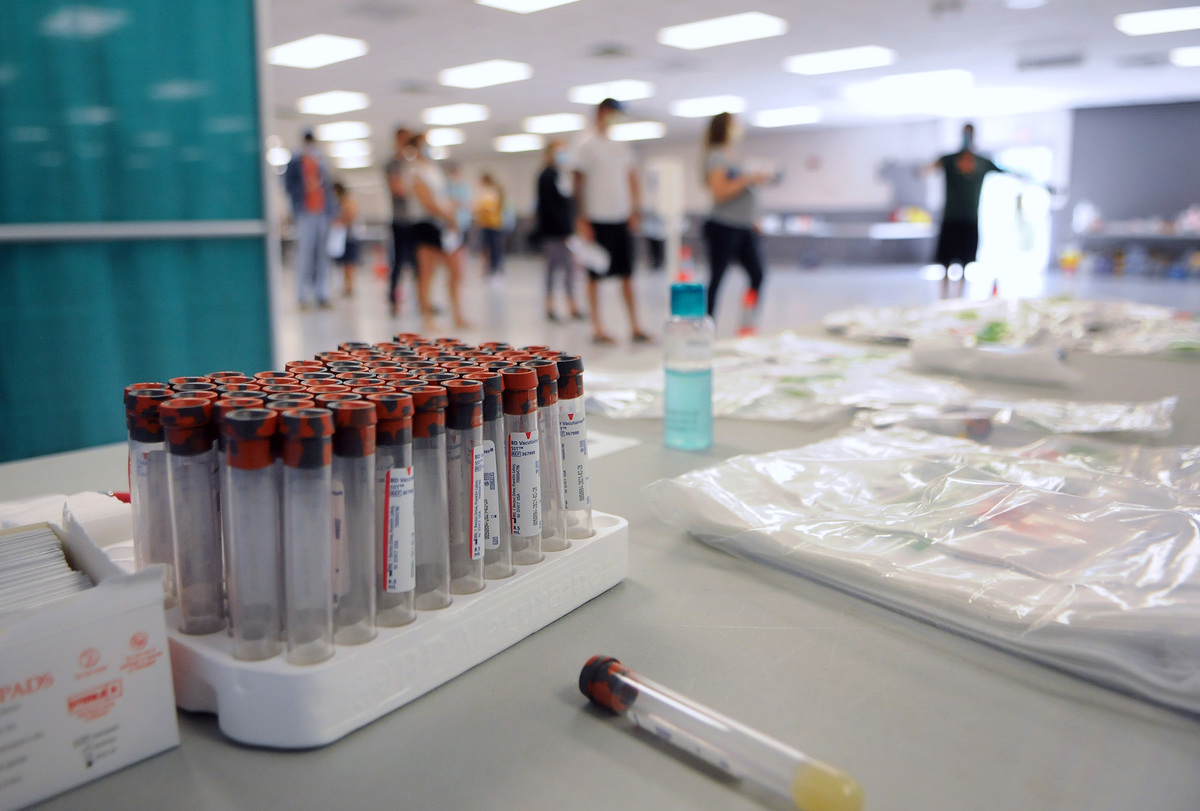 Blood collection tubes sit in a rack on the first day of a free COVID-19 antibody testing event at the Volusia County Fairgrounds in DeLand, Fla., on May 4.

Salvador Perez got really sick in April. He's 53 and spent weeks isolated in his room in his family's Chicago apartment, suffering through burning fevers, shivering chills, intense chest pain and other symptoms of COVID-19.

"This has been one of the worst experiences of his life," says Perez's daughter, Sheila, who translated from Spanish to English for an interview with NPR. "He didn't think he was going to make it."

Perez recovered and now wants to go back to work as a chef at a Chinese restaurant. But his boss told him he needs a test — an antibody test — first. So he found a place to get one and tested positive. His blood indeed has antibodies to the novel coronavirus — proteins that his immune system produced when it fought off the pathogen.

But her father is also nervous. His doctor told him the antibodies might give him some protection against catching the virus again but also stressed that's far from guaranteed. 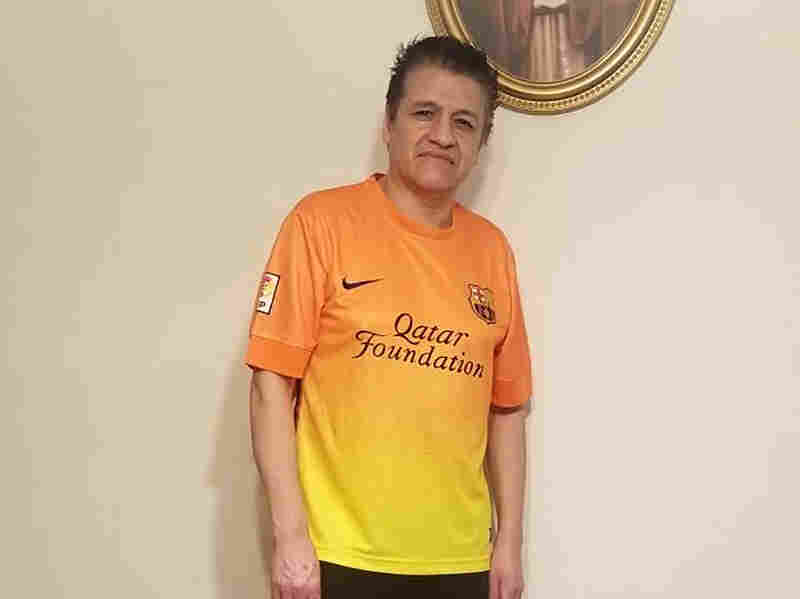 Salvador Perez became sick with symptoms of COVID-19 in April and spent weeks self-isolating at home in Chicago. When he recovered, his employer asked him to take an antibody test before he'd be allowed to return to work. Sheila Perez hide caption 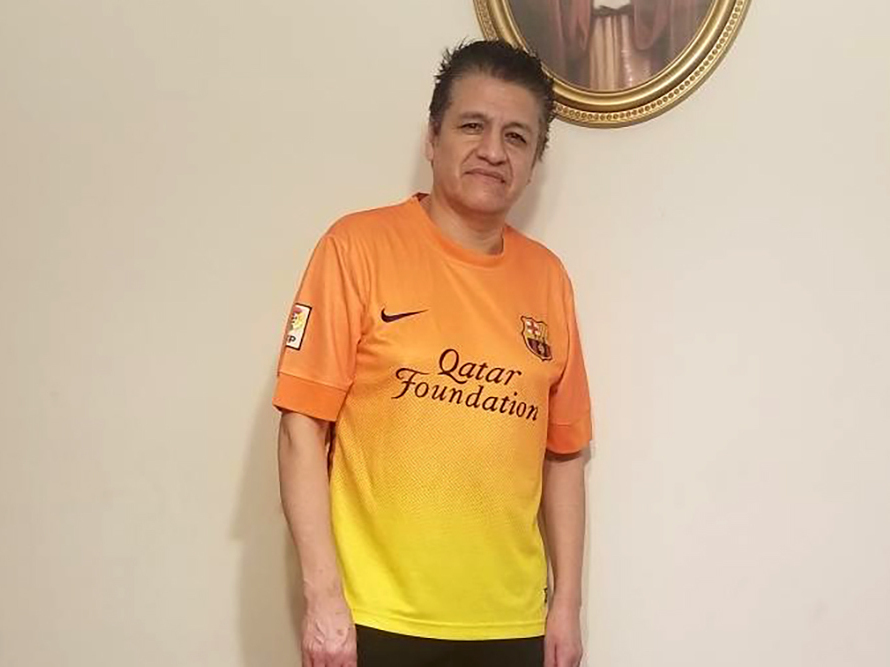 Salvador Perez became sick with symptoms of COVID-19 in April and spent weeks self-isolating at home in Chicago. When he recovered, his employer asked him to take an antibody test before he'd be allowed to return to work.

"He's anxious that he doesn't want to get sick. He's kind of scared of going back to work because ... he might go through it again," his daughter says.

Salvador Perez is right to be worried. It's still not certain that antibodies measured by such a test would protect him from catching the virus again. And if the antibodies are protective, it's unknown how strong that protection might be or how long it might last. There are also questions about the reliability of many antibody tests being sold.

Researchers are urgently trying to answer those uncertainties and figure how best to conduct antibody testing.

Nevertheless, increasing numbers of people are getting the tests — many without recognizing how much is still unknown about what the results mean.

Some employers, such as Perez's restaurant, are requiring workers to take antibody tests if they want to continue working or return to their jobs. Others are getting employees tested to see how widely the virus has spread through their workforce and to try to find ways to improve worker safety. And some labor unions are helping workers get tested in hopes of offering them some sense of security against the virus.

In addition, some individuals are buying the tests themselves out of curiosity and to use as a basis for personal decisions, such as whether it's safe to start spending more time with close friends and extended family members who are outside the household.

But the idea of using antibody testing in these ways worries many doctors and public health authorities because there are many common misconceptions.

A Double-Barreled Approach To Antibody Testing Could Improve Accuracy

For starters, the antibody tests are only a sign of past infection. Whether the infection is actually gone can only be determined by a diagnostic test that identifies genetic material from the virus or viral particles.

Some people also falsely think testing positive on an antibody test proves they can't get infected with the virus again.

"I think people just want this to go away and want to resume their normal lives," says Kelly Wroblewski, director of infectious disease for the Association of Public Health Laboratories. "But my fear is [antibody tests are] going to be used as this sort of golden ticket to demonstrate immunity — when we just don't know if that's the case."

Still, Wroblewski and others acknowledge the results might offer at least some useful guidance in certain cases.

"If I had a household where I had a number of younger individuals in the household, one of whom had antibodies, I think that that individual would probably be the safest bet to be able to safely go to get the groceries," says Michael Mina, an assistant professor of immunology and infectious disease at the Harvard T.H. Chan School of Public Health.

But, Mina quickly adds, "I still wouldn't want that individual going to get groceries and then going the next day to a nursing home to see Grandma." Having antibodies against the coronavirus is just no guarantee that you won't pick up or pass along an infection, he says.

Still, antibody testing could provide researchers with valuable information for studying overall trends in the epidemic, such as how many people in the community have actually been exposed to the virus. Antibody testing could also help identify people who could donate blood plasma containing antibodies; such plasma is being investigated for possible treatments for COVID-19 patients. 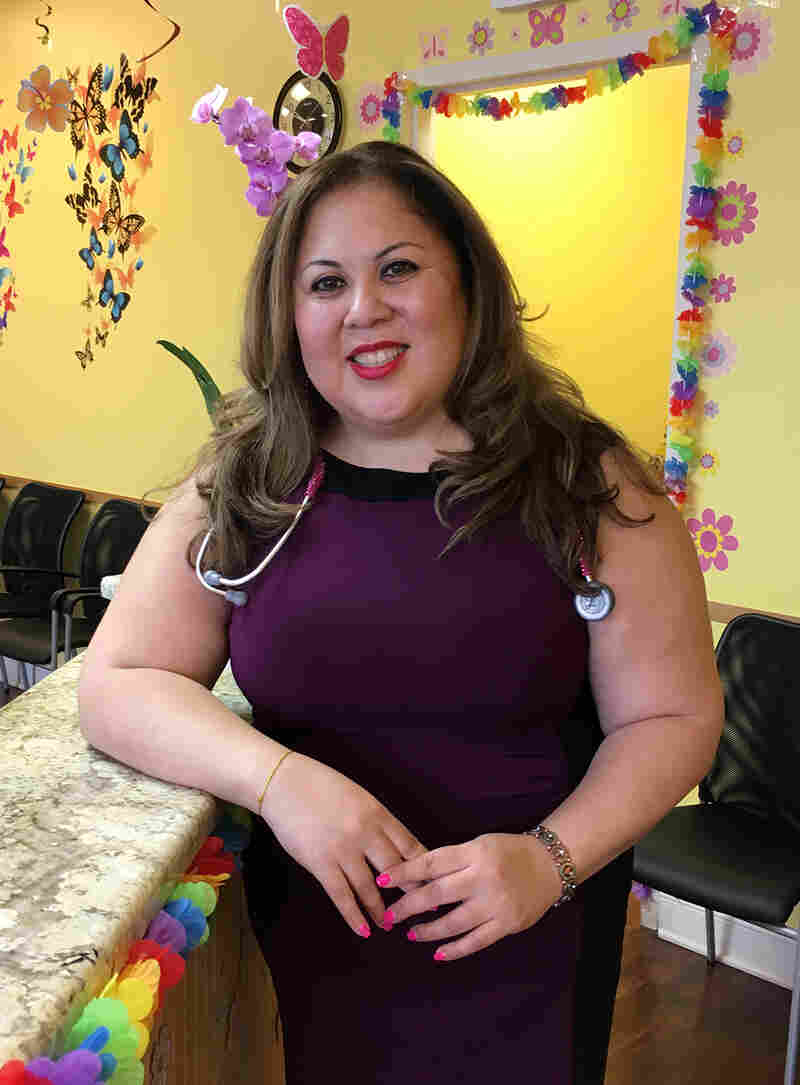 Immunologist Juanita Mora has been arranging antibody testing in Chicago for people who need the test to go back to work. A positive test doesn't guarantee immunity from coronavirus reinfection, she tells her patients. Social distancing and other precautions are still important. Juanita Mora hide caption 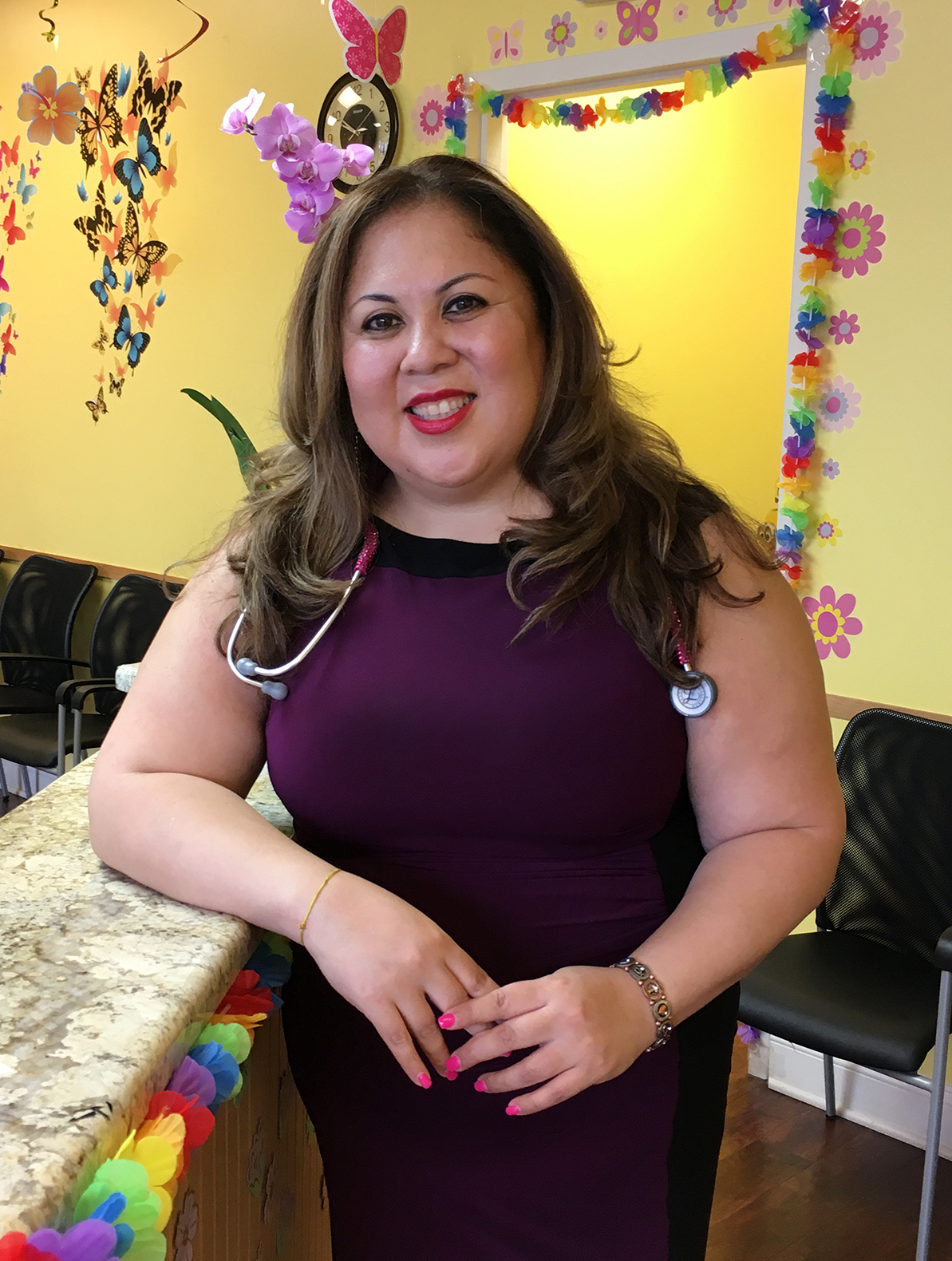 Immunologist Juanita Mora has been arranging antibody testing in Chicago for people who need the test to go back to work. A positive test doesn't guarantee immunity from coronavirus reinfection, she tells her patients. Social distancing and other precautions are still important.

Dr. Juanita Mora, an immunologist at the Chicago Allergy Center, helped Perez and his family get tested with one of the tests that's at least been approved for use by the Food and Drug Administration. (The agency recently cracked down on unregulated tests.) Mora has been doing the same for an increasing number of people in Chicago's Latino community who are being required to get antibody testing by their employers.

"They want to go back to work and feed their families," Mora says. "They need the money."

She says she makes sure her patients understand that they still have to be careful and can't let down their guard just because they get positive results on an antibody test.

"Having positive antibodies may mean that you have some protection, but you can still get it again," Mora tells her patients. "And then you want to protect your loved ones, right? So you want to teach your kids the right thing to do.

"So, keep the face cloth on. Keep the social distancing, and so forth," Mora advises her patients.

But people are not just getting antibody tests to go back to the workplace.

Jon Pepper and his wife, Diane, who live in New York City, had been wondering whether they had COVID-19 ever since they got sick in April. He's 64, and they've simply wondered whether they might now have some immunity to the virus. He decided to get a $119 antibody test directly from Quest Diagnostics, a big commercial laboratory that now sells the test to anyone who wants one. Diane Pepper was soon tested, too. 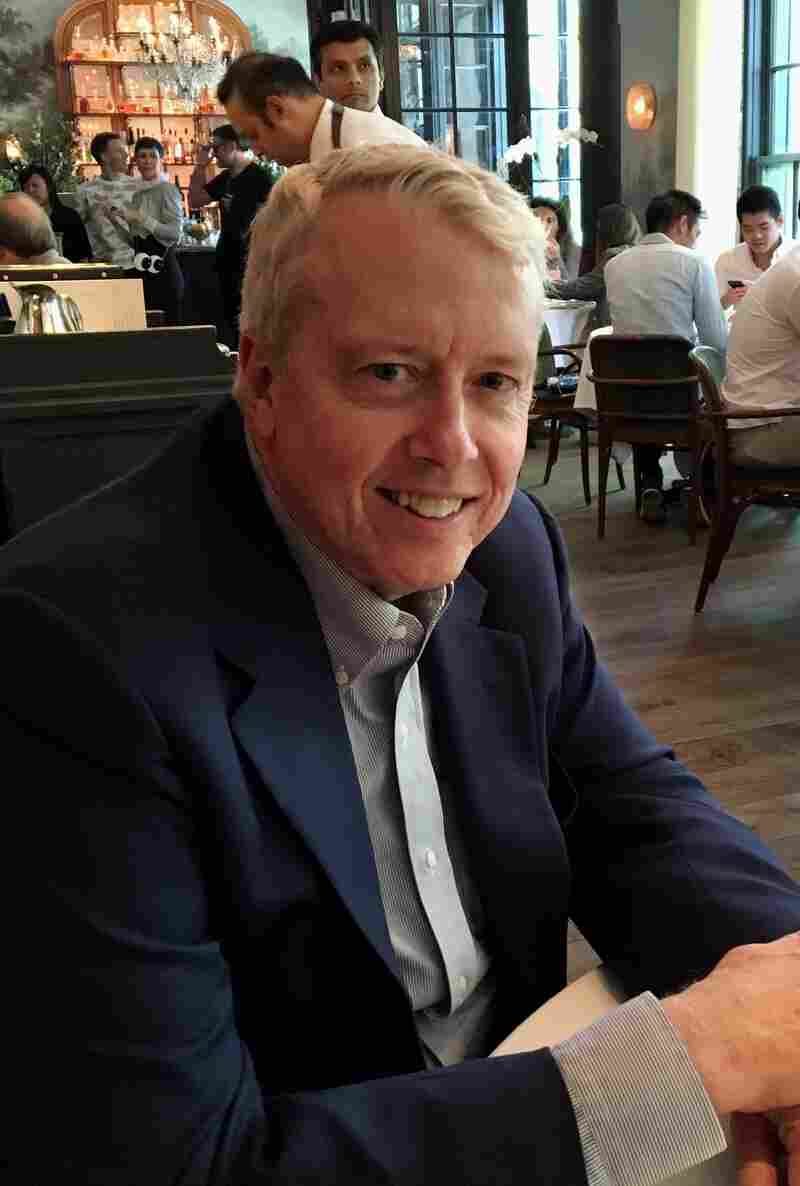 Jon Pepper and his wife, Diane, live in New York City. They took an antibody test after recovering from an undiagnosed illness in April to confirm their suspicions that they'd had COVID-19. Jon Pepper hide caption 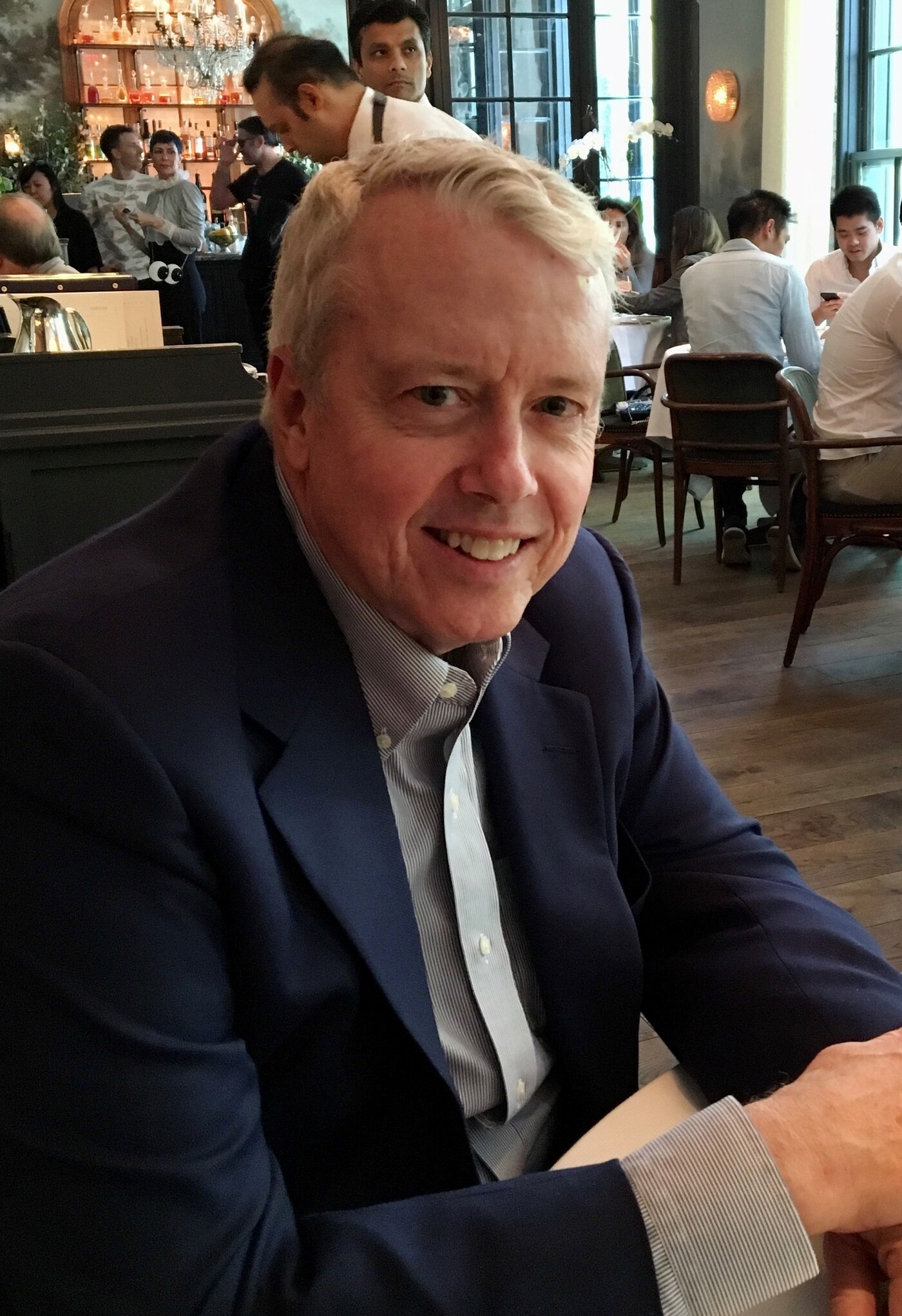 Jon Pepper and his wife, Diane, live in New York City. They took an antibody test after recovering from an undiagnosed illness in April to confirm their suspicions that they'd had COVID-19.

The Peppers say testing positive on the antibody test gave them peace of mind.

"I feel like we have some level of protection that our bodies have have been through this, and they're fighting back," Jon Pepper says. "And they have the capacity to fight back further if necessary.

"So I think it's something that's in my corner in getting through this," he adds, "and especially in a hot spot like New York City, where we're surrounded by people who have been exposed to this and infected."

Pepper says he and his wife are still being cautious. They stay at least 6 feet away from other people when they go outside. And they're wearing masks when they go shopping. But Pepper and his wife are now thinking about having their adult children over for dinner for the first time in months.

"At some point we have to resume life again. And based on this test I feel like we have some sense — a bit of security," Pepper says.