Accessibility links
Hydroxychloroquine Research Is Hampered By Politics, Furor Over The Drug : Shots - Health News Some scientists think this drug has promise for COVID-19. But controversy around the drug is complicating the job of scientists who just want to find answers. 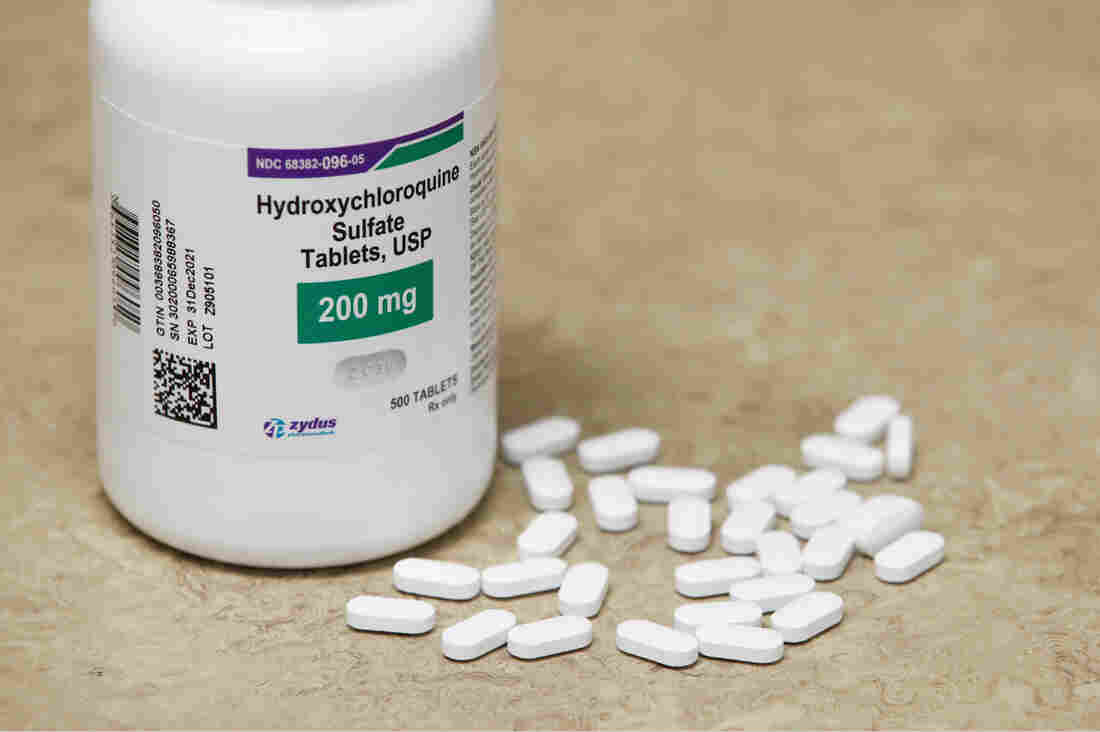 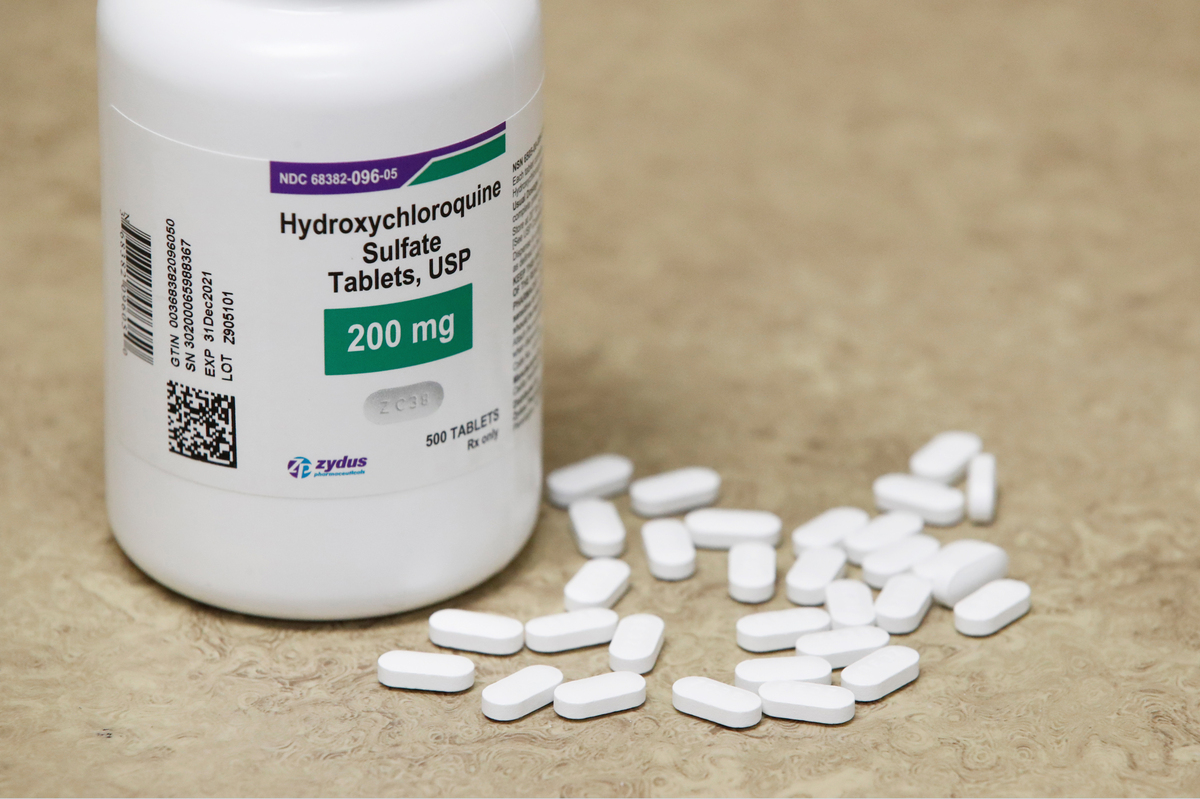 Hydroxychloroquine, a drug used to prevent malaria and treat certain autoimmune conditions, is being studied to treat or prevent COVID-19.

Publicity around the drug hydroxychloroquine spiked this week when President Trump revealed that he's taking it to prevent COVID-19.

All the attention on the drug in recent months is increasingly spilling into science and making it harder for some researchers to actually study whether the drug has potential for COVID-19.

Doctors have used hydroxychloroquine for decades to treat autoimmune conditions and to prevent malaria.

While the Food and Drug Administration has given emergency use authorization for doctors to try the treatment on COVID-19 patients, the agency has also cautioned about possible deadly side effects.

On Wednesday, the executive director of the World Health Organization's emergencies program, Dr. Mike Ryan, echoed other leading medical experts, saying at a press briefing that hydroxychloroquine and chloroquine have "yet to be found effective in the treatment of COVID-19" or for preventing the disease.

Because of potential side effects, Ryan says the WHO advises the drug "be reserved" for use in the context of clinical trials, which are underway in many places.

But for some researchers, running such trials is becoming more difficult because of the controversy around the drug.

Dr. Jon Giles didn't expect to have any problems drumming up interest in his clinical trial testing if hydroxychloroquine can help prevent COVID-19.

"We were getting calls all the time from people who were interested," says Giles, an epidemiologist and rheumatologist at Columbia University.

For his study, Giles planned to give a short course of the medication to people who were "household contacts" of COVID-19 patients. Like many of the ongoing trials, it would be randomized with a control group.

By the end of April, Giles was ready to start enrolling people. But his team ran into a problem when they started calling potential participants.

"Pretty much everybody said, 'Well that's the drug that's dangerous to your heart,' or, 'I talked to my friends and they said don't take it,' or that 'I saw on TV it's dangerous,' " says Giles.

Just a month earlier, he says demand for the drug was soaring. Some patients with autoimmune conditions couldn't even get their prescriptions filled, after Trump spoke enthusiastically about the drug.

In April, the FDA issued a warning about using the drug for COVID-19 patients without strict medical supervision in a hospital or as part of a clinical trial. The agency had received reports of serious heart-related adverse events and death in patients with COVID-19 receiving hydroxychloroquine and chloroquine.

But the back-and-forth headlines and the ongoing political wrangling seemed to make people wary of the medication, Giles says, even in the context of a carefully run clinical trial.

"It became almost impossible to get anyone interested," says Giles.

Giles says the committee overseeing his study added a new requirement: that study participants needed to have had an electrocardiogram within the last year.

As a rheumatologist, Giles knows the medication better than most doctors because he prescribes it to many of his patients.

"It's a very, very safe drug; it's been used for over 75 years," he says. "When I give someone hydroxychloroquine, I don't get an ECG or do blood monitoring."

Giles was planning to enroll otherwise healthy people and screen out anyone who could be at risk of heart problems. But that new requirement, plus the negative press, made it too difficult to find study subjects.

He gave up on doing the study. He says it's a missed opportunity.

"It's not unreasonable to think that a short course of this drug might have some protective ability," he says.

The concern over cardiac risk for hospitalized patients is real, says Dr. Mark Poznansky, director of the Vaccine and Immunotherapy Center in the Infectious Disease Division of Massachusetts General Hospital. Even though the drug has been used safely to prevent malaria, he says, "that is very different from using the drug in acutely ill patients with COVID-19."

He recently published a review of the evidence for using hydroxychloroquine to treat COVID-19 that casts doubt on its effectiveness.

"The data up to date ... doesn't make one entirely optimistic that we are going to find something different in a clinical trial," he says.

Poznansky notes a recent study of nearly 1,400 people with moderate to severe COVID-19 found no benefit and concluded that the drug should not be routinely used on patients.

He says the drug should only be used in the context of clinical trials "or under strict compassionate use, in order to do no harm."

'The virus doesn't care about politics'

"It really caused a huge problem for us," O'Neill says. "It set us back probably a month."

O'Neill attributes the drop in enrollment to the FDA warning and a highly publicized study of over 300 hospitalized veterans with COVID-19. The authors of that study found the drug did not reduce the need for a ventilator and even linked hydroxychloroquine to higher death rates. However, the study wasn't a rigorous controlled trial and the results weren't peer-reviewed.

"That was interpreted as a warning that the drug is dangerous," says O'Neill. But he says, using it for prevention is a different matter than treating already sick patients. "Everything that we see about hydroxychloroquine suggests that the earlier you use the drug, the more likely it is to be effective."

O'Neill says the fact that President Trump is touting this drug means it now has become a political flashpoint.

"It has made people absolutely committed to proving him wrong," he says.

"The problem with that is this is not politics, this is life and death," he says. "We're talking about a treatment. Who would be rooting for us not to find a therapy, for God's sakes?"

Multiple clinical trials involving hydroxychloroquine are underway at the University of Washington in Seattle. But Dr. Christine Johnston says recruitment has become a major challenge.

"We are hearing now from some participants that the study and the drug feel too political and they just don't want to participate at all," says Johnston. "As physicians, we would not do something that we thought was harmful."

Johnston's colleague, professor Dr. Ruanne Barnabas, is trying to recruit 2,000 patients to test whether the drug can prevent COVID-19.

"A clinical trial is the only way that we will be able to answer this question quickly and with high confidence," she says.

Researchers at Duke University are also testing whether hydroxychloroquine can be a new tool for prevention during the pandemic. But Duke professor of medicine Dr. Susanna Naggie says they need to be able to recruit enough people.

"I do worry that there are many well-controlled trials that are underway where we won't get an answer," says Naggie. "That, I think, would be a shame."

Another researcher conducting large trials, Dr. Wesley Self, says the coverage of hydroxychloroquine has felt a bit like an "emotional roller coaster," which has led to more questions from patients.

"I actually find it helpful," says Self, an emergency physician at Vanderbilt University Medical Center. "We're giving people relatively low doses of hydroxychloroquine, which we believe are quite safe. And we're monitoring for side effects very closely."

Self is the lead investigator of the ORCHID trial that focuses on hydroxychloroquine in treating hospitalized COVID-19 patients.

"This is a perfect situation for a clinical trial to really understand what the balance of those benefits and risks are," he says.

Another large clinical trial is looking at whether hydroxychloroquine and the antibiotic azithromycin can keep people with COVID-19 from being hospitalized or dying.

"We think the way that this medication works, it would be better to take it early, rather than later, especially when somebody is really really sick already," says Dr. Davey Smith, head of Infectious Diseases and Global Public Health at University of California San Diego School of Medicine.