Accessibility links
Fauci Optimistic About Moderna Vaccine Trial : Shots - Health News Dr. Anthony Fauci says it's "conceivable" a coronavirus vaccine could be ready within months but cautions "when you're dealing with vaccines, there could be so many things that get in the way." 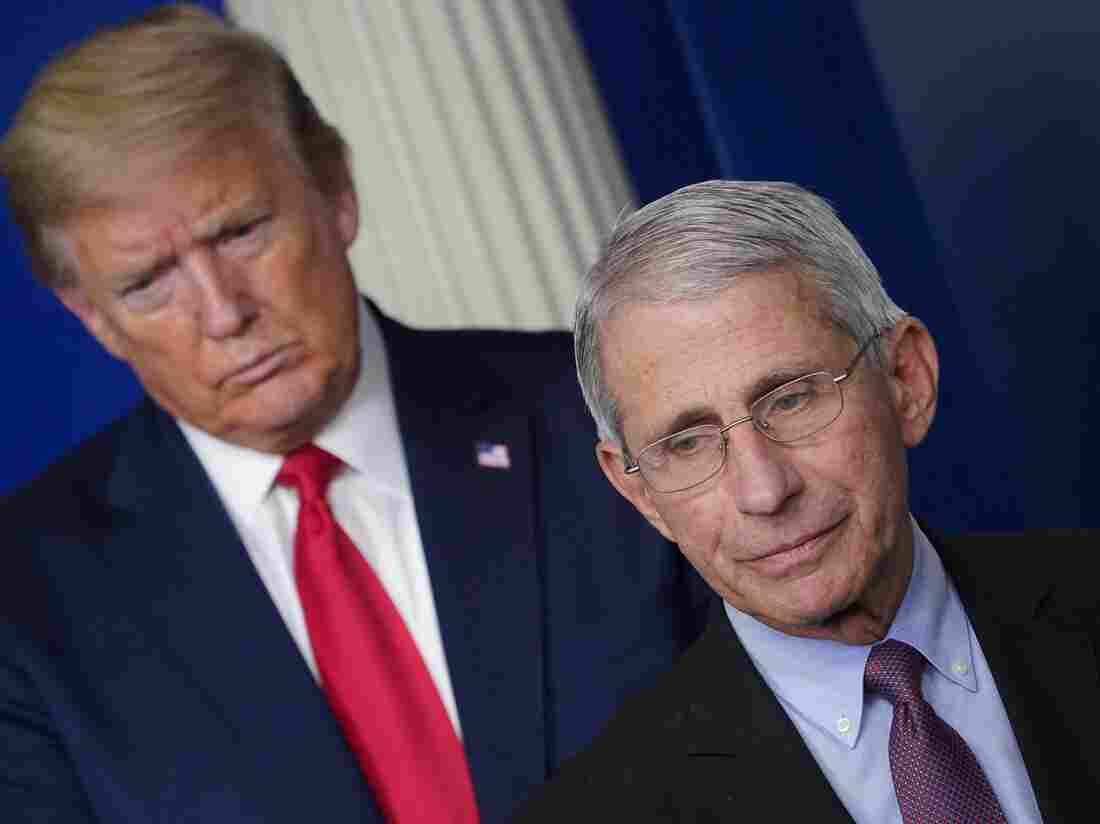 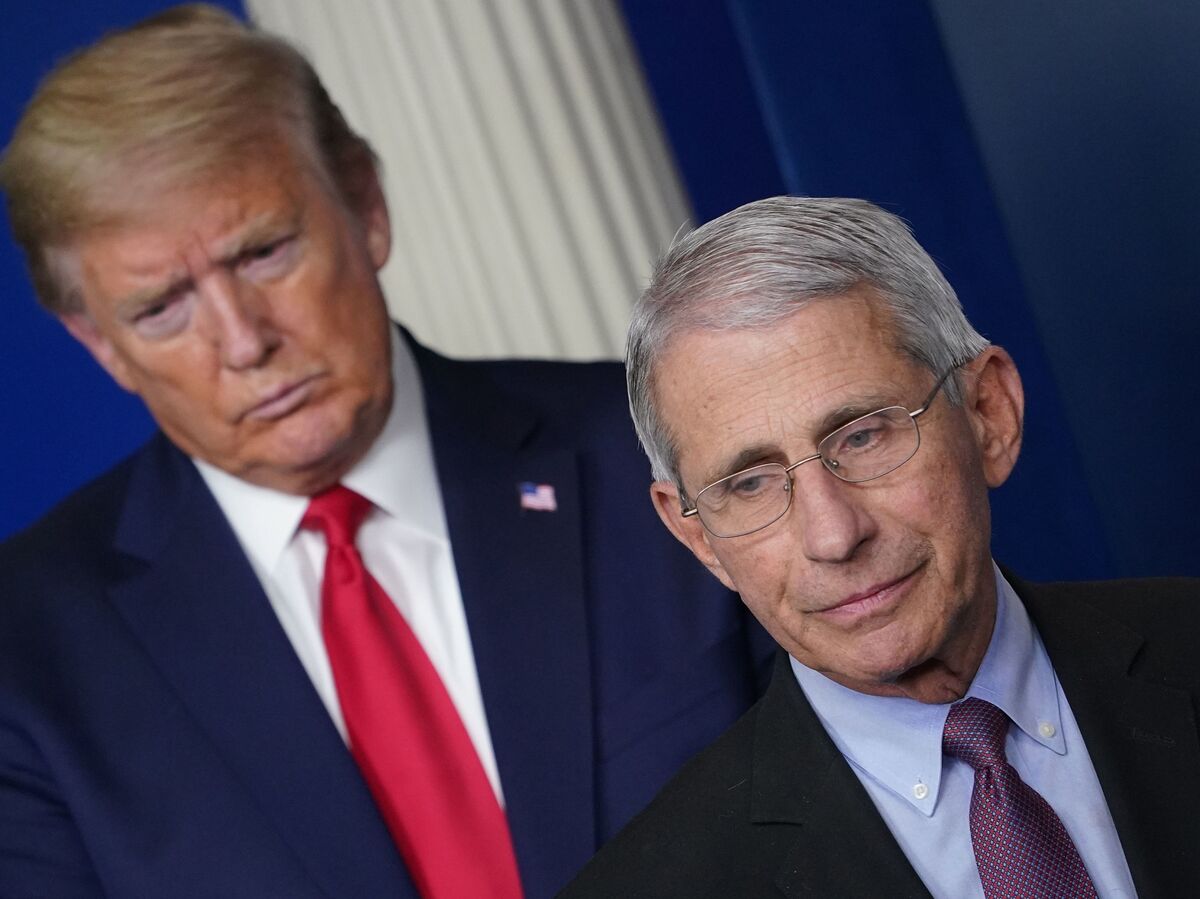 Dr. Anthony Fauci expressed "cautious optimism" Friday about the initial results from a coronavirus vaccine trial — which were widely celebrated this week — and said it remains "conceivable" that a vaccine for the deadly pathogen could be available by the end of the year.

Amid a global race for a vaccine, the nation's leading infectious disease expert said in an interview with NPR that he was encouraged by findings from the phase one trial of a vaccine under development by researchers at the Massachusetts-based biotech company Moderna Inc. On Monday, the company said the vaccine appears both safe and capable of stimulating in test subjects the type of immune response needed to ward off an infection.

But the company, which is developing the vaccine in collaboration with the National Institute of Allergy and Infectious Diseases, which Fauci leads, has yet to publish detailed results from the trial, fueling concerns among researchers about how much the announcement can be trusted.

Addressing those concerns, Fauci said his team at the infectious disease institute is compiling full details from the trial but said, "Having looked at the data myself, it is really quite promising."

Fauci said full results would be submitted to a peer-reviewed journal, most likely within a few weeks. If all goes according to plan, Fauci said it is possible that a vaccine could be available within a matter of months — a timeline that would shatter the years-long process typically required to produce a vaccine.

"I think it is conceivable if we don't run into things that are, as they say, unanticipated setbacks, that we could have a vaccine that we could be beginning to deploy at the end of this calendar year, December 2020 or into January 2021," Fauci said.

But "that's never a promise," he cautioned, "because when you're dealing with vaccines, there could be so many things that get in the way."

Moderna's vaccine is just one of hundreds under development by companies and universities worldwide racing to stamp out a virus that in the United States alone has infected more than 1.5 million people and claimed the lives of nearly 95,000. With all 50 states in the beginning stages of reopening their economies after weeks of lockdown, the search for a vaccine is taking on new urgency.

When Can We Expect A Coronavirus Vaccine?

Any vaccine will be met by massive global demand requiring billions of doses and a total shift in approach to how vaccines are typically developed. Fauci said that has meant moving forward with production before testing can be completed. He explained that accelerating efforts to develop the coronavirus vaccine in this way is "not compromising in any way the safety or the scientific integrity."

"What we're doing right now, and this is something that I think is going to be characteristic of multiple of the candidates that are being tested for a coronavirus vaccine, is that you even start investing and even making doses of the vaccine before you are completely sure that it works. So the risk is not to the patients, because the safety and the scientific integrity is intact," he said. "The risk is to the investment."

Until a vaccine is ready, public health experts agree that social distancing and other mitigation measures will remain central to keeping the outbreak at bay, particularly as states begin to reopen. Fauci has warned of a second wave of cases, and said Friday that "the one thing I'm sure of is that there will be infections around in the fall and in the winter, because it's not going to disappear from the planet."

Fauci said the test for government leaders will be how well-prepared they are to keep "blips of cases" from growing into outbreaks, and from there "real rebounds of infection." Doing so will require "identification, isolation and contact tracing," he said.

"It isn't inevitable that we're going to have a massive rebound," Fauci said. "What is inevitable is that we will see cases. It's how we deal with it that's going to be the endgame."

Fauci was also asked about an analysis researchers at Columbia University released this week that found approximately 36,000 deaths could have been avoided in the United States had broad social distancing measures been put in place one week earlier in March. The U.S. could have also seen roughly 700,000 fewer infections if actions that began March 15 had instead started March 8, according to the study.

"We always could have done better, particularly when you look in the rearview mirror and do a retrospectoscope and say, 'Wow, you know, we could have saved a lot of disease if we had done it much earlier.' And that's true," Fauci said. "You have to have a certain degree of realism and humility about it."