Accessibility links
Public Health Workers Threatened Over Coronavirus Contact Tracing : Shots - Health News Online misinformation is fueling a backlash in some places against coronavirus containment strategies such as contact tracing and isolation. Some health officials have even received violent threats. 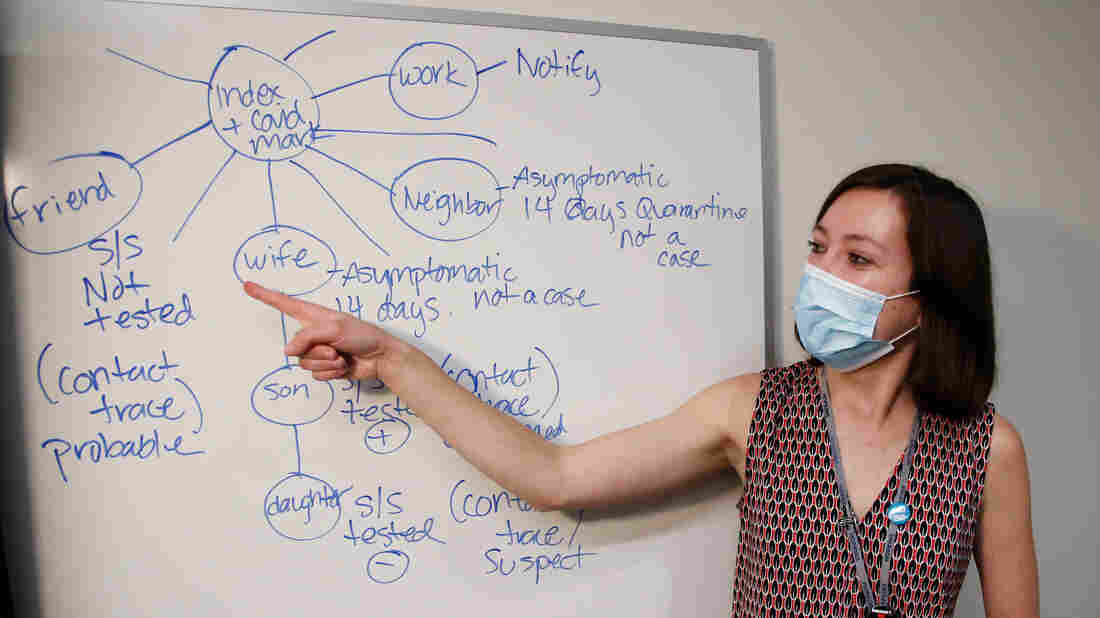 At the Salt Lake County Health Department, a woman teaches new contact tracers on May 19 how to identify potential new exposures after a person tests positive for the coronavirus. Rick Bowmer/AP hide caption 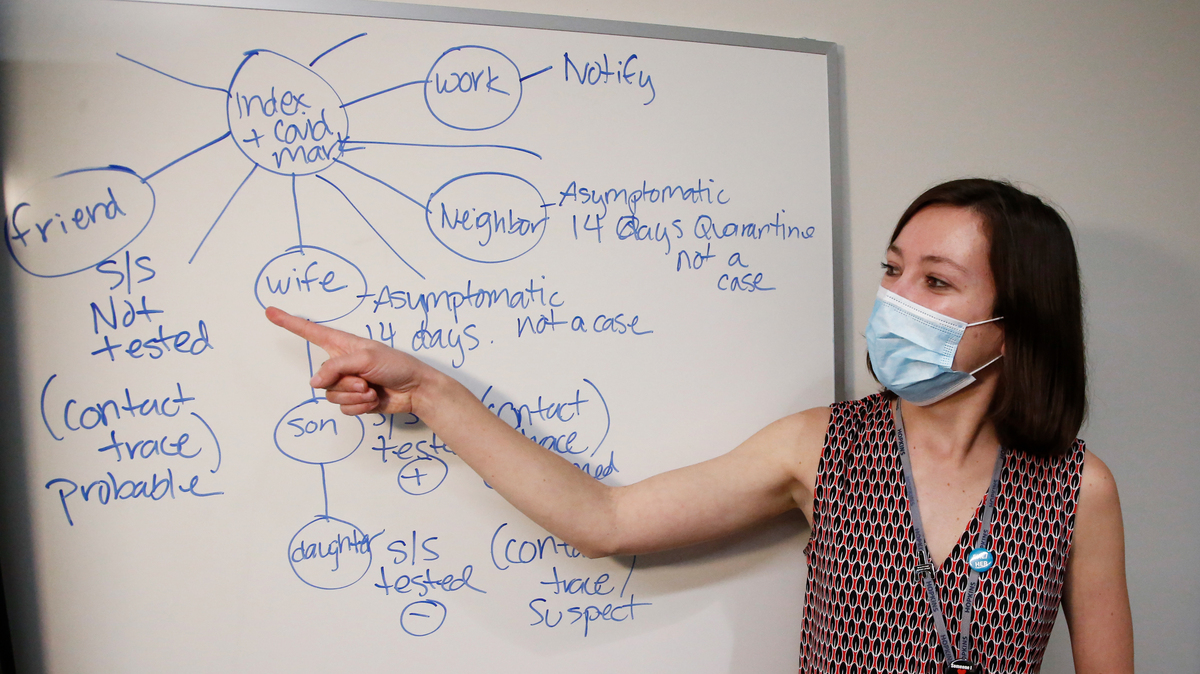 At the Salt Lake County Health Department, a woman teaches new contact tracers on May 19 how to identify potential new exposures after a person tests positive for the coronavirus.

"Usually, we kind of sit here under the radar," says Jones, whose department before the pandemic was mostly known for mundane duties such as recording births, issuing permits for septic tanks, and investigating reports of food poisoning.

But that all changed when the coronavirus pandemic began in March.

Jones and her staff are now highly visible members of the government in Okanogan County, as they help steer the local response to the outbreak. She's had to tell local businesses to stay closed, track down residents who could be infected and tell people to isolate or quarantine themselves.

And she has noticed wariness, suspicion, and even outrage creep into the conversations about her work, among some members of her community.

"For the first time, people are hearing terms like 'contact tracing' and 'case investigation,' and those frighten them for some reason," Jones says. "They've been politicized."

Jones isn't alone: Other public health workers have encountered resistance, online harassment and even violent threats for conducting contact tracing and other containment strategies in their local communities. State and local health officials say it's a worrisome development as businesses reopen, and they try to build community trust for strategies that will help keep viral transmission in check.

Whenever she can, Jones tries to demystify the public health process for infectious disease — noting that it's similar to tracing the source of a food-borne illness like salmonella from the sick patient, back to the source of contamination.

But Jones is finding it difficult to get the word out about the public health tools now being used more widely: coronavirus testing, contact tracing, and isolation and quarantine. Okanogan County is rural and relatively isolated, with no local daily newspaper, and the pandemic has only meant fewer opportunities for communication and interaction.

Given these obstacles, "a lot of people rely on social media for their information — and misinformation," she says.

In May, a small town spat about contact tracing and isolation escalated online, and became so heated that Jones became afraid for her life.

It began with a simple interaction: Jones called a household where someone had tested positive for coronavirus to remind that person to stay in isolation, and to see if that person or anyone else needed anything dropped off. Jones had been told that a person had left the house.

Not long after, law enforcement told Jones there was online chatter about her team's work, and growing threats against her.

One particular Facebook post began to spread. It accused Jones of surveillance and warned people they were being watched.

"The accusations started flying, that we were spying [on that family], that we had put them under house arrest," Jones says. "It got totally twisted and people thought we violated their civil liberties."

Next came a series of online threats. People said they would reveal her home address. There was even what Jones described as "a call to arms" against her.

Jones filed a police report and bought security cameras for her home.

"I was that fearful," she says. "When the neighbor's dog would bark, I would jump up at night."

Jones was shocked by the threats. She has lived in Okanogan County since the mid-80s, and thinks of it as a conservative-leaning place with reasonable people.

But she believes the pandemic has brought forward a more radical strain in the community — people unwilling to listen to facts, who have become convinced the pandemic hides a more nefarious purpose.

"We have the extremists who are being fed whatever information that isn't accurate," she says. "Somehow we've become the villains."

In Ohio, protesters have repeatedly targeted the state Director of Health, Dr. Amy Acton, even gathering outside her home. Other health officials have also reported threats related to their work on the pandemic. Dr. Kathleen Toomey, Georgia's public health commissioner, was given a security team after receiving numerous hostile threats.

Facebook groups pushing for states to reopen more quickly are rife with unsubstantiated allegations about the government's underlying motives for using contact tracing and isolation.

In Washington, Gov. Jay Inslee, a Democrat, has tried to quell online rumors about the state's public health response, including a false claim that people who don't participate in contact tracing, or refuse testing, will not be permitted to leave their homes or will somehow be locked up. Inslee's administration even rolled back a requirement that restaurants collect the names and numbers of diners, to assist contact tracing, after privacy concerns were raised.

Warnings about contact tracing have popped up in mainstream conservative media outlets. A right-wing activist has compared California's contact tracing program to Nazism, and she was also flagged by a watchdog group when she talked about making a t-shirt with " 'contact tracer' on the front side, 'my Second Amendment' on the back side," adding that "I'm not endorsing anything, I'm just saying if the Second Amendment is not meant for this time right now, where there's massive tyranny everywhere...then I really don't know what is."

In Washington's Douglas County, south of Okanogan County, Commissioner Marc Straub says some of his constituents are telling him they are worried about government overreach during the pandemic.

"It's not a stretch for people to be concerned and we have to be sensitive to that," says Straub. "It's important for people to understand this is not going to be forced upon them."

Straub says some questions he's getting are entirely legitimate. People are worried about medical privacy and the possibility that the government will use mobile apps for contact tracing.

Few states have pursued this model, but it could become more widespread.

It appears the public is split on the issue. A recent poll from the Kaiser Family Foundation found about half of respondents would agree to download an app for the purpose of contact tracing.

Other concerns that Straub has heard are broader, but generally focused on how the government might use the coronavirus to justify interfering in people's lives, both now and in the future.

"Those are things that need to be addressed, so people feel more at ease with this as being a tool for mitigating the transmission of COVID," says Straub.

Discussions about how to safely reopen businesses, schools and government offices have become politicized and rancorous in many places, and often public health officials find themselves at the center of those debates.

"We do worry about the toll that this is taking on public health leaders," says Dr. Marcus Plescia, chief medical officer for the Association of State and Territorial Health Officials.

"Some of these decisions are not popular. Some of them are decisions that the public health officials would perhaps rather not make, but they are trying to keep people safe."

"We've had protests at our offices, threats of a shooting and a civil war," says Dr. John Douglas who is executive director of Tri-County Health Department, which serves parts of the Denver metro area and nearby rural areas in Colorado.

The Tri-County Health Department has shuttered several offices where people have thrown rocks through the windows and left graffiti. On Twitter, police in Aurora, Colo., posted images of four separate incidents of vandalism against the Health Department in April and May, and asked the public for help in identifying suspects.

CAN YOU HELP US ID?

We are investigating 5 vandalisms at a @TCHDHealth office in Aurora. The images are from 4/16,18, 20 & 5/4. We do not have a suspect identified, only a person(s) of interest. Please send tips to @CrimeStoppersCO to be eigible for a reward of up to $2,000.00. pic.twitter.com/53dOgSz5PH

"It's a shadow that is certainly hanging over us and in many ways impairing our work," he says.

Douglas says much of the backlash first began after the department's public health directive for residents to stay at home. A prominent Republican lawmaker in Colorado took issue with the order, calling the health board "unelected bureaucrats" who were making "unilateral" decisions.

"So that narrative of 'unelected bureaucrats' making life-altering decisions sort of became a theme," Douglas says.

Douglas is concerned that this pushback will continue to distract from the hard work his local agency needs to do, especially in the coming months, to safely reopen while also tamping-down local outbreaks of the virus.

"We are desperately trying to scale up contact tracing, but we're having to divert funding to hire security guards," he says.

'They're being painted as villains'

Theresa Anselmo, executive director of the Colorado Association of Local Public Health Officials, recently did an informal poll of her membership.

She found close to 70 percent of them had received some kind of threat, either of violence or property damage. A similar number reported they are also encountering political threats, including the possibility of losing their job.

"They're making these decisions based on science and data and evidence and information," says Anselmo. "And they're being painted as villains."

Adding to the challenge, she says, is that some local law enforcement agencies began refusing to enforce the public health orders.

"So they [public health directors] have no cover, and [there's] no teeth to the public health orders," she says. "People don't trust the experts in these fields ... they are being told not to trust them."

"We're grappling with how to make sure the public understands why this is important work and that it's not meant to hinder your privacy or otherwise infringe on your civil liberties," says Lori Freeman, CEO of the National Association of County and City Health Officials.

Freeman says her organization has heard too many other reports in multiple states of public health authorities being questioned and undermined.

As contact tracing "rapidly scales up," she worries that hostility and distrust could set back efforts to keep people safe from the coronavirus.

"We need to make sure people really understand why we're trying to help them and not harm them," she says. "Otherwise, you're going to have a real hard time keeping outbreaks from happening in those communities."

This story is part of NPR's reporting collaboration with Kaiser Health News.