Accessibility links
Coronavirus Vaccine Candidates To Enter Wide Testing In Humans In July : Shots - Health News Dr. Francis Collins says some candidates for a coronavirus vaccine will be ready to start large-scale human trials as early as next month. Scaling up production may start before tests are complete. 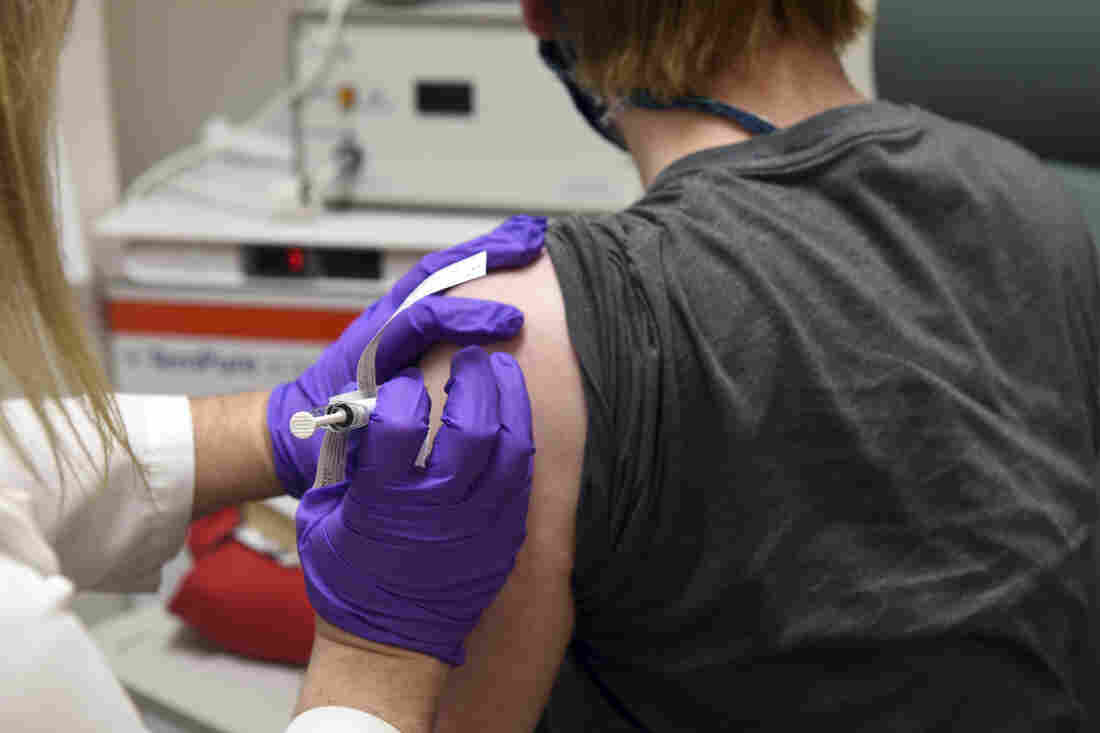 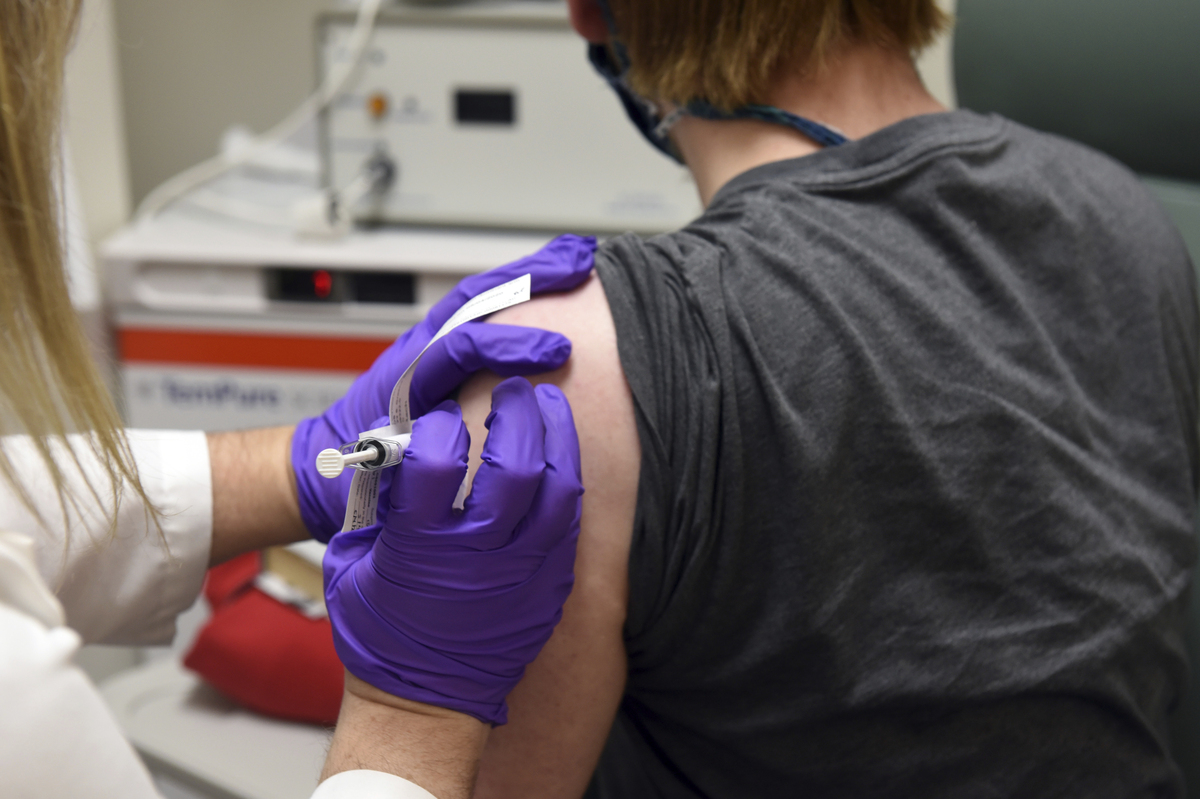 The first patient enrolled in Pfizer's COVID-19 coronavirus vaccine clinical trial at the University of Maryland School of Medicine in Baltimore, receives an injection in May. Pfizer's candidate for a coronavirus vaccine is one of number that are in various stages of development around the world.

University of Maryland School of Medicine via AP

As the number of confirmed coronavirus cases globally approaches 6.5 million, scientists are racing to develop a vaccine. Currently, there are 10 vaccine candidates in development around the world that are in the beginnings of human trials.

Some will be ready for large-scale testing as soon as the beginning of July, says Dr. Francis Collins, director of the National Institutes of Health and a member of the White House coronavirus task force.

These phase 3 trials involve roughly 30,000 volunteers for each candidate vaccine, with half the volunteers receiving a placebo, he says.

"That is a phenomenal thing to be able to say, considering these things usually take several years," and considering how recently the virus was identified, Collins tells All Things Considered.

He hopes that at least one vaccine that's been proved safe and effective against the coronavirus will be ready in 2021.

Who ultimately decides which vaccines move forward? Is that up to your agency? Or what the president has called his Operation Warp Speed vaccine task force?

These vaccines are put forward by various companies. They are in different phases of being ready. They have to first go through a phase 1 trial to see whether they, in fact, in a small number of volunteers, do produce a decent level of antibodies — which would tend to predict that they're going to work against this coronavirus. And they have to also show in a small number of volunteers that they're safe. And not all of them have even quite yet gotten to that point.

The ones that do — we want to have a whole menu of vaccine opportunities because these don't always work. ... So it is a very good thing that we're going to end up with several different vaccines that are going through this large-scale testing in the course of the coming months. And my hope is they'll all work. ... But if some of them drop out along the way, we just want to be sure that by the end of this calendar year, we have at least one or maybe two or maybe three that have shown that they're both safe and they're effective.

And let me emphasize that word 'safe.' This brand that we're using, Operation Warp Speed, is supposed to convey the speed with which we're trying to move because of this intense public health need. But it is not a means of compromising safety. We will not do that. We're just skipping over some of the steps that tend to go slowly for regulatory reasons and for business reasons and trying to make those go faster. We are not compromising on safety.

Has the president's term [warp speed] made it difficult for you as a public health official to message exactly how this works?

Not really. I kind of like the idea of conveying that we're in a hurry here — I just need to quickly explain after I say that what that means. One of the things we're doing is to make sure that when a vaccine looks like it's got some promise, it's going into one of these large-scale trials — let's assume it might work. And let's go ahead and start manufacturing lots and lots of doses [at that point], with U.S. government support, so that if it does work, you don't then have to wait for many months to have the vaccine ready to distribute. ... This so-called "at-risk manufacturing" — you wouldn't normally do that because some of this is going to go to waste. But when you consider what's happening here and the people's lives at risk, it seems like the right thing to do. That's part of the warp speed idea.

How will you make sure that once the vaccine is ready, it is equitably distributed and that anyone who needs one can get one?

The first doses ... will need to go to the people who are at highest risk. ... particularly health care providers, people in long-term care facilities. ... But the goal would be certainly to start scaling this up as soon as you have a vaccine that's safe and effective, so that by 2021, maybe even in the first or second quarter, we would have 100 million doses or so, so it wouldn't have to be rationed so severely. But at first, there won't be enough for everybody.