Accessibility links
Newest Coronavirus Hot Spots Include California And The South : Shots - Health News Nationwide, coronavirus infection numbers are trending down, but several states are seeing upticks, with the heaviest impact falling on communities of color and nursing home residents.

8:09
New Coronavirus Hot Spots Emerge Across South And In California, As Northeast Slows 8:09 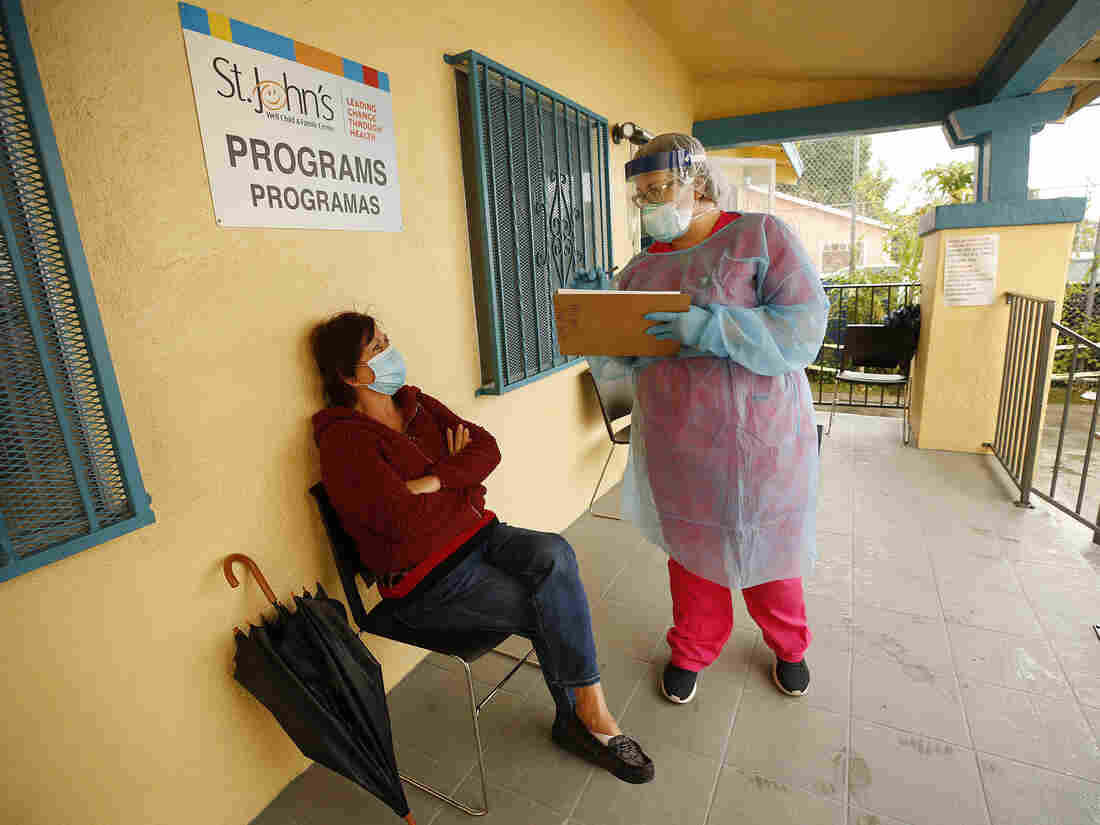 Maria Banderas (left) answers questions from medical assistant Dolores Becerra on May 18 before getting a coronavirus test at St. John's Well Child and Family Center in South Los Angeles, one of the LA neighborhoods hit hard by COVID-19. Al Seib/LA Times via Getty Images hide caption 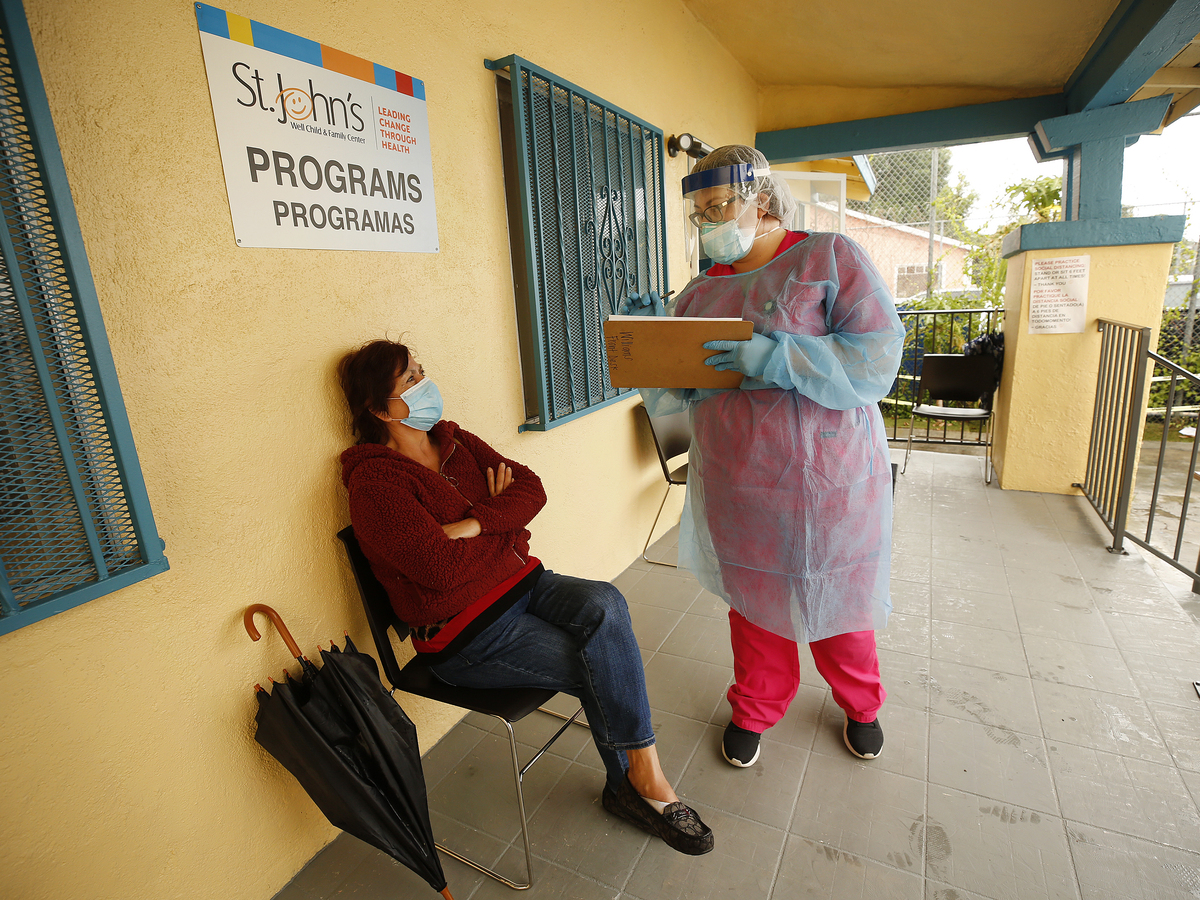 Maria Banderas (left) answers questions from medical assistant Dolores Becerra on May 18 before getting a coronavirus test at St. John's Well Child and Family Center in South Los Angeles, one of the LA neighborhoods hit hard by COVID-19.

Mass protests against police violence across the U.S. have public health officials concerned about an accelerated spread of the coronavirus. But even before the protests began May 26, sparked by the May 25 death of George Floyd in Minneapolis, several states had been recording big jumps in the number of cases.

The head of the Centers for Disease Control and Prevention, Dr. Robert Redfield, registered his concern at a congressional hearing Thursday. He shook his head as a congresswoman showed him photos of throngs of people at the Lake of the Ozarks in Missouri over Memorial Day weekend and crowds in Florida that had assembled to watch the May 30 launch of the SpaceX Dragon crew capsule.

"We're very concerned that our public health message isn't resonating," Redfield said. "We continue to try to figure out how to penetrate the message with different groups. The pictures the chairwoman showed me are great examples of serious problems."

The U.S. is still seeing roughly 20,000 new cases a day. There's a wide range from state to state, from one case a day, on average, last week in Hawaii all the way up to to 2,614 new cases a day in California. Specific areas in the Golden State have become hot spots, along with certain counties in every Southern state.

The northeastern states of New York, New Jersey and Massachusetts — which among them accounted for a quarter of all COVID-19 deaths in the U.S. — are seeing a substantial slowing of new cases.

A closer look at these hard-hit areas highlights some of the common and unique challenges states face as they manage protests and begin efforts to reopen the economy amid the risks of more disease and death.

Tennessee and the Carolinas among Southern states showing jumps

In the South, the timing of new cases appears to be linked to the reopening of restaurants, barber shops and gyms, which started in most states more than a month ago. Figures tracked by NPR show the number of cases in North Carolina and South Carolina this week is up by roughly 60% from two weeks ago. In Tennessee, that increase is 75%.

Georgia and Louisiana look steadier, but they experienced some of the highest cases counts and fatalities in the region in recent weeks, at the height of the pandemic.

In Southern states that were quick to reopen, officials sometimes felt the need to explain big increases in case counts on some days. In Georgia, for example, a state health official said a big one-day increase was because of a backlog of reporting cases from a commercial lab. In Tennessee this week, a daily jump of 800 cases was blamed partially on an ongoing prison outbreak that yielded 350 new positive test results.

In California, counties are continuing to allow businesses to reopen even as newly confirmed coronavirus cases climb. The state experienced a 40% jump in cases over the last week. Large metro areas like Los Angeles and San Francisco have gradually lifted restrictions and Californians have responded by traveling to beaches and neighboring areas, blurring the effectiveness of the varying degrees of restrictions between adjacent counties.

Race, Ethnicity Data To Be Required With Coronavirus Tests In U.S.

Los Angeles County, home to more than 10 million people, has the highest number of cases in the state. Numbers tracked by NPR show that, on average, health officials report around 1,300 new cases daily. The county has blamed slow lab results for a backlog, while acknowledging that community transmission has been ticking up, especially among communities of color.

In the Northeast, where New York City became the U.S. epicenter of the pandemic for weeks, there are still thousands of new cases every day, although the rate of increase has slowed. It's down 41% in New Jersey over the past two weeks, down 33% in New York and down 13% in Massachusetts. But health officials caution that doesn't mean the coronavirus is under control in these three states. New York is still seeing more than 1,000 new cases a day; over the past week, Massachusetts averaged just over 500 a day, and New Jersey had close to 800.

Ethnic disparities persist across the country

People of color have been disproportionately affected in California, as elsewhere: Latinos make up over half of the COVID-19 cases in California, where they are about 40% of the state's population. In Los Angeles County, the highest COVID death rates have been among native Hawaiians, Pacific Islanders and black residents. Minorities have an increased risk of developing underlying health conditions like high blood pressure and diabetes, making them more likely to develop a more severe illness if infected with the virus.

In Tennessee, which has one of the nation's fastest-growing case counts, neighborhoods that are home to large immigrant populations have emerged as persistent hot spots. Nashville's public health department has hired specialized community outreach workers, in partnership with immigrant advocacy organizations, to conduct contact tracing and connect families with coronavirus testing.

Who's Hit Hardest By COVID-19? Why Obesity, Stress And Race All Matter

"We knew we had to do something different, and that's what we're doing now," says Leslie Waller, a city epidemiologist who oversees the project.

Waller acknowledges that many of the people at risk work in jobs that have been deemed essential or own businesses that can't be run remotely. Public health officials also express concern that co-workers in close-knit immigrant communities often carpool to the same jobs, and some job sites have experienced large outbreaks.

But in Southern states, rising case counts have not slowed the momentum for further lifting of restrictions. On Thursday, Tennessee announced additional loosening of restrictions for community events, allowing fairs, expos and parades. Instead of limiting the number of people who can gather, the focus has shifted to ensuring everyone can maintain social distance.

"Thanks to the continued hard work of Tennesseans and business owners operating responsibly, we're able to further reopen our state's economy," Tennessee Gov. Bill Lee said in a written statement. "These new guidelines provide useful information so that we can enjoy the events that connect us to our neighbors and communities."

There's virtually no public discussion of reinstating business restrictions, so long as hospitals can handle any uptick in illness.

Some states in the Northeast have found ways to bring down infection rates, though many of them have put much stricter rules on businesses and public spaces.

You still can't sit down in a restaurant in New York City or anywhere in Massachusetts and New Jersey. That may be allowed in the coming weeks, but only outdoors. These states are all still in the early stages of reopening, after residents were told to stay home for almost two months and all but the most essential businesses were closed.

While most states do not have broad requirements for face coverings, rules requiring them are more common in the Northeast. In Massachusetts, some kind of face covering is required indoors and outside, if you can't stay at least 6 feet away from other people. In New York and New Jersey, masks are required in public and while riding buses or trains. Within some states, counties have varying rules, which can cause confusion. In Los Angeles County, health officials made cloth face coverings mandatory at all times when outside your home, while San Diego County only requires masks when you are within 6 feet of another person.

Residents everywhere are chafing at the rules, but in the hardest-hit states, there's a wider acceptance of social-distancing rules. A poll out last week found twice as many New York residents were worried about opening too quickly, compared with the number of New Yorkers who were worried about it happening too slowly. Polls in New Jersey and Massachusetts also have shown better than majority support for gradual, phased openings.