Accessibility links
Office Elevator In COVID Times: Experts Weigh In On How To Stay Safe : Shots - Health News As more and more people filter back to the workplace, many face a tiny space that can create a large logjam: the elevator. Even the lobby is fraught with coronavirus questions. We have answers.

The Office Elevator In COVID-19 Times: Experts Weigh In On Safer Ups And Downs

The Office Elevator In COVID-19 Times: Experts Weigh In On Safer Ups And Downs 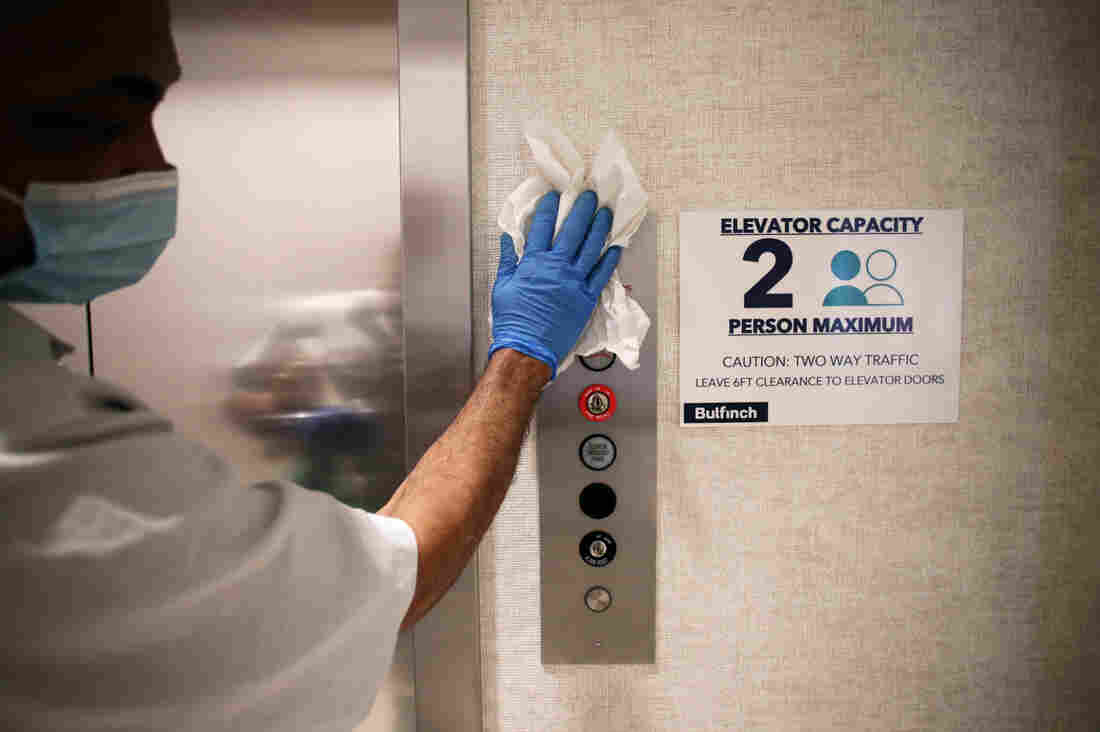 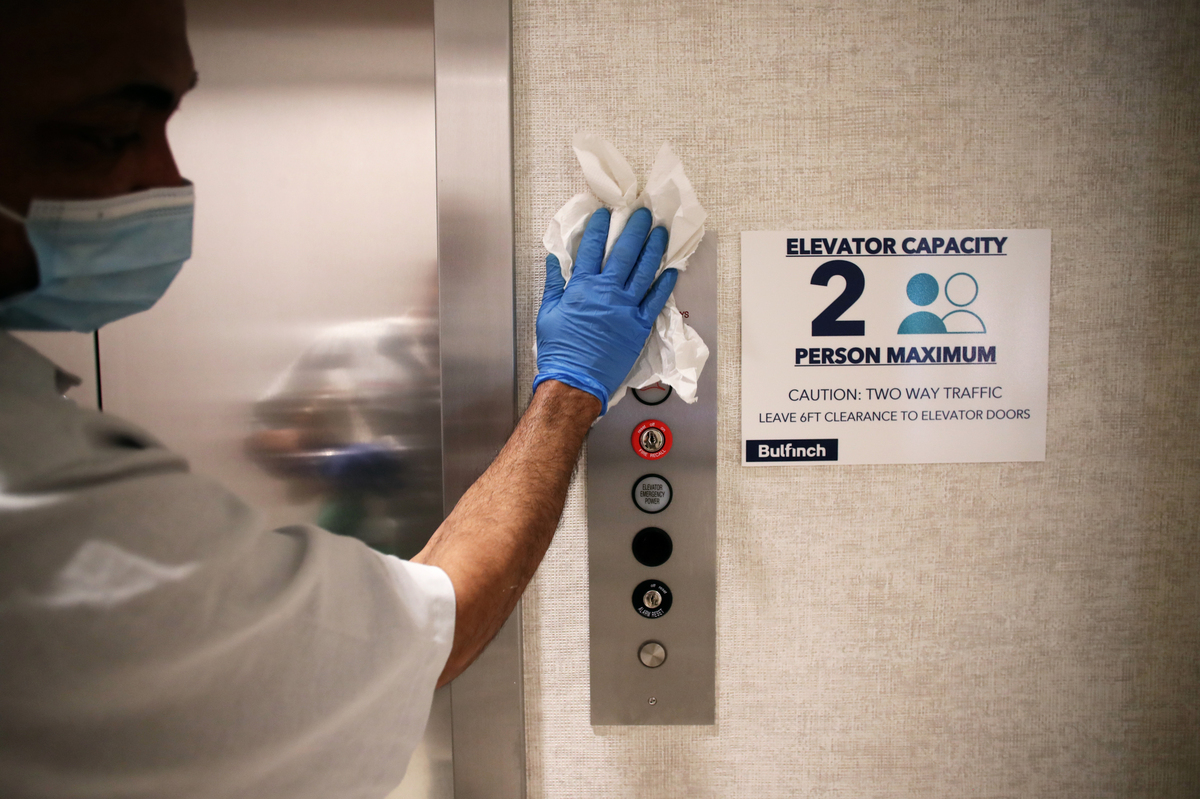 When the American Medical Association moved its headquarters to a famous Chicago skyscraper in 2013, the floor-to-ceiling views from the 47th-floor conference space were a spectacular selling point.

But now, those glimpses of the Chicago River at the Ludwig Mies van der Rohe-designed landmark, now known as AMA Plaza, come with a trade-off: navigating the elevator in the time of COVID-19.

Once the epitome of efficiency for moving masses of people quickly to where they needed to go, the elevator is the antithesis of social distancing and a risk-multiplying bottleneck. As America begins to open up, the newest conundrum for employers is how to safely transport people in elevators and manage the crowd of people waiting for them.

If office tower workers want to stay safe, elevator experts think they have advice, some practical, some not: Stay in your corner, face the walls and carry toothpicks (for pushing the buttons). Not only have those experts gone back to studying mathematical models for moving people, they are also creating technology such as ultraviolet-light disinfection tools and voice-activated panels.

"When there is risk of disease spreading from human to human, continuing to maintain a clean and safe vertical transportation system is critical to help people return to work and safe living," says Jon Clarine, head of digital services at Thyssenkrupp Elevator. 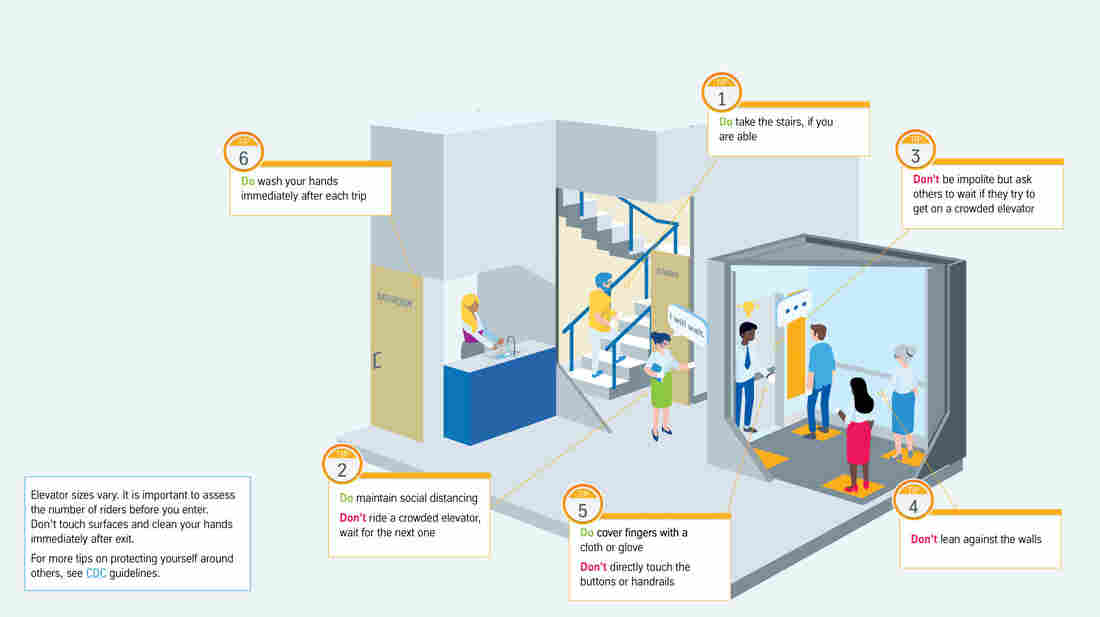 After all, most elevators are inherently cramped, enclosed spaces that can barely fit two people when they are safely spaced 6 feet apart, much less the dozen or more that elevators in commercial and residential buildings were designed to hold. They're a minefield of touchable buttons and surfaces. Air circulation is limited to what a few vents and the opening doors can manage. Plus, they're usually mobbed during the morning, lunchtime and evening rushes.

The good news is, while infection transmission is possible if people happen to leave behind respiratory droplets of virus in the elevator, the time spent on a ride is short, says infectious disease expert Dr. Steven Lawrence of Washington University School of Medicine in St. Louis.

Coronavirus FAQs: How Risky Is It To Fly? Is There Any Way To Reduce The Risks?

Pack a mask, sanitizer and tissues or toothpicks

To mitigate those risks, elevator experts stress that people riding elevators should wear masks, resist touching surfaces as much as possible and use items such as disposable tissues or indeed those toothpicks to touch the buttons. Also, use hand sanitizer frequently. The Centers for Disease Control and Prevention recommends limiting time in elevators and taking one-directional stairs instead, when possible, as well as maintaining 6 feet of distance.

Karen Penafiel, executive director for the National Elevator Industry Inc. trade association, also recommends that people face the elevator walls and not talk — to minimize spread of respiratory droplets that could carry the coronavirus.

"It makes sense when you think about it, but it's so contrary to every social protocol we have been raised with," Penafiel says. "It's not comfortable."

But the biggest hang-up across city skylines for offices and residences may be the recommendation by Penafiel and other elevator experts to limit the number of passengers in most elevator rides to four to accommodate social distancing — one person in each corner. That creates a logistical challenge for building managers and employers who have thousands of people to move within a single building.

AMA Plaza owner Beacon Capital Partners plans to limit its elevator riders to four at a time, according to an email from company spokesperson Maureen Richardson. The same goes for the more than 90-floor One World Trade Center in New York City and the roughly 8,000 people who report to work there, says Jordan Barowitz, spokesperson for the Durst Organization, which oversees management of the iconic skyscraper.

Cutting the number of people moving up a building per ride — in some places by as much as two-thirds — means people wait and wait, huddling in the lobby, coughing, sneezing and talking loudly.

"That's where you're going to get the queuing," says Chris Smith, vice president of marketing and product strategy for elevator manufacturer Otis Elevator Co., optimistically using a word suggesting orderly standing in line.

It's no wonder Smith's customers have been calling nonstop about the elevator bottleneck. So Otis staffers have been simulating for customers how staggered times for starting the workday and different employee spacing could help slow the flow of traffic.

It all comes down to hard math. On a normal day, more than 3,000 people work in the 52-story AMA building. With only four passengers at a time, which is about half the number of riders in a typically crowded elevator, that translates to about 750 elevator rides each morning launching from 24 elevator cabs (and that's not counting the trips made by separate freight cabs).

The Langham, a luxury hotel occupying the building's first 13 floors, will be placing a sign with graphics in the elevator foyer to encourage social distancing, says spokesperson Deepika Sarma. Hotel staffers are looking into possible decals for the floors of the elevators indicating where to stand, and requiring that riders wear masks.

Another tenant of AMA Plaza, WeWork, whose business model depends on people renting its office space, will be placing signs denoting safe distances in the elevator lobbies of its buildings, as well as touch-free hand sanitizer dispensers. WeWork CEO Sandeep Mathrani told CNBC that 40% of its sites occupy office space low enough within buildings that people could take the stairs instead.

But climbing, say, 36 flights of stairs isn't an option for most people. (Top stair racers take five minutes to cover that many floors. It takes a person of average fitness up to 25 minutes.) And stairs aren't viable in buildings of any height for those with physical disabilities or mobility issues or when carrying heavy loads.

To be sure, those who live in high-rises have already been navigating these questions — whether in luxury buildings with resources or public housing units without.

But as more offices look at reopening, Otis and Thyssenkrupp have been swamped with calls from customers asking for new technology to help them manage these new challenges, given the coronavirus pandemic. Destination dispatching, in which employees can swipe a key card at a turnstile that notifies the elevator where they need to go, has seen a surge of interest due to its touchless control — and during the pandemic, elevators have been reprogrammed to limit the weight load to a smaller number of passengers.

Other product offerings in the works include calling the elevator via cellphone, antiviral stickers for elevator buttons, lobby concierge-run elevators, express service for each elevator ride, ultraviolet-light HVAC purification systems and even elevator buttons that riders can activate with their feet, voice or hand gestures.

To reduce the need to touch buttons, Otis' Smith says, elevators could be placed into "Sabbath service" mode, where they automatically go to each and every floor — a service offered for decades for those whose religion dictates they not operate electrical devices on certain days.

"It's all about helping customers manage risk"

Brand-new businesses designed to make elevators safer are emerging. More than two months ago, Philip Rentzis helped found Ashla Systems, which sells ultraviolet-light systems designed for elevators that are similar to those used to kill viruses for hospital instruments. At least 100 buildings have already signed up to install the technology, he says, in part because building owners are terrified about the long-term costs of keeping up their new rigorous cleaning regimens.

Michael Rogoff, president of the New York City and South Florida residential management firm Akam Living Services Inc., says the staff in some of his buildings are cleaning the elevator more than once per hour — or even after every use. When residents complain that they shouldn't have to pay for communal amenities they're not able to use, he points to the new cleaning costs.

"The elevator cleaning and disinfecting is just on a whole new level than it was previously," Rogoff says.

Even as companies evaluate their suite of elevator options, harsh realities are emerging of how challenging it will be to move the workforce where it needs to be, Thyssenkrupp's Clarine says.

"Look, you're going to disrupt the flow of traffic in your building, but how long are you willing for that to be an inconvenience before it becomes a disruption?" Clarine says. "It's all about helping customers manage risk, and some want to manage more so than others."

For now, the American Medical Association says it plans to allow its roughly 1,000 employees to return to the offices approximately 30 days after government leaders lifted their stay-at-home orders. City orders were loosened Wednesday.

The association's initial return-to-work phase will begin with "approximately 10% of employees on a voluntary basis," according to a statement issued by association media manager Robert Mills. It's not yet clear when — or how — it will be able to get the rest of its staffers up to their offices in the sky.