Accessibility links
Producing Enough Vaccine For The Coronavirus Means Companies Have To Start Now : Shots - Health News To speed vaccine production from years to months, companies must start making a vaccine in large quantities even before it's clear a vaccine works. 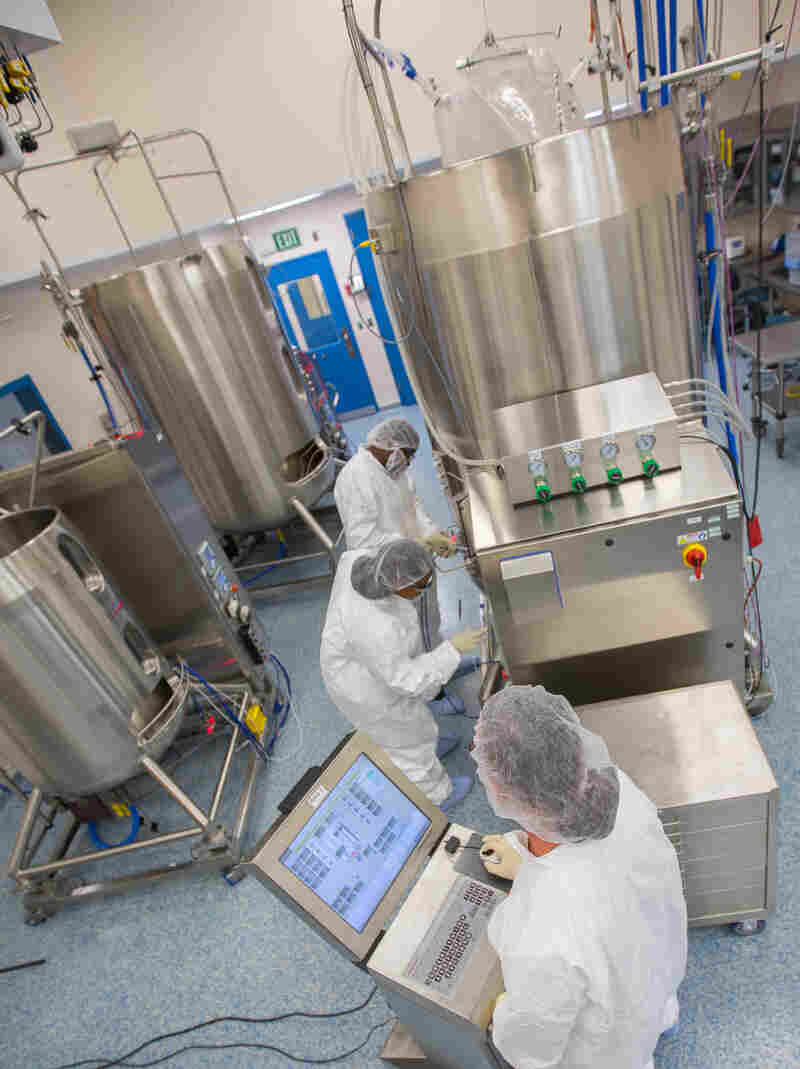 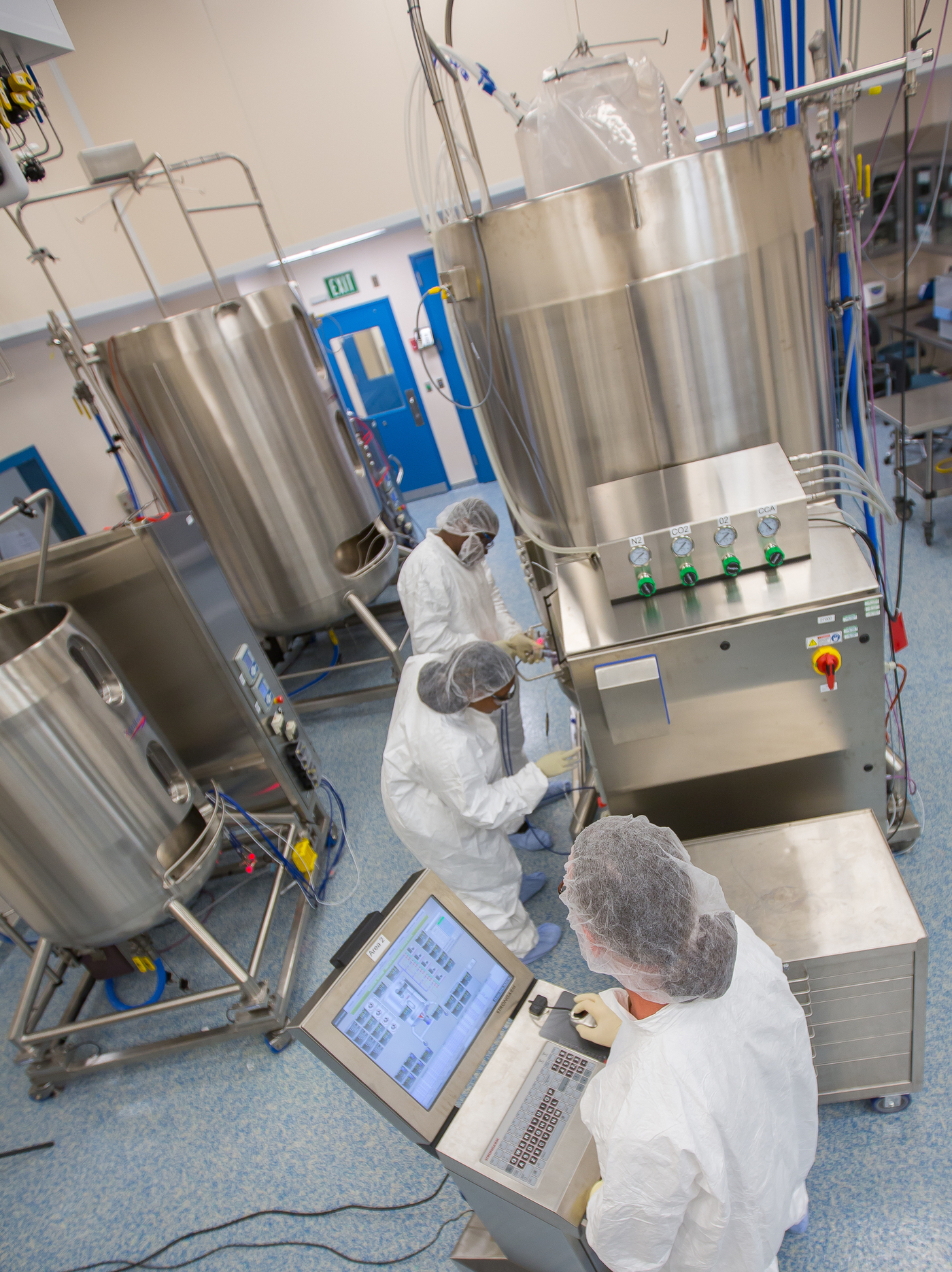 Once upon a time, developing a new vaccine was a step-by-step process that went from concept, to design, to tests in humans, to regulatory approval, to manufacturing.

It was a process that could take a decade or more.

But the urgent need for a COVID-19 vaccine has radically changed all that. Now, the hope is the entire process can be completed in a year or less.

A good example of the new paradigm is a vaccine being developed by Novavax. It's what's called a protein subunit vaccine. The proteins are encased in a nanoparticle that gets injected into a person, along with a generalized immune stimulant known as an adjuvant.

"We have a lot of confidence based on what we've see so far based on our animal modeling that the vaccine will work," says Gregory Glenn, president of research and development at Novavax.

Positive results with animal testing doesn't always translate to successful results in people, so, typically, Glenn would be waiting to see the results of the human testing that has just begun before making any big decisions about manufacturing.

But he won't be waiting this time. A lot of steps that used to come one after another are taking place concurrently.

"One of the most dramatic things we're doing in parallel is to assume the vaccine is going to work, so we scale it up now," Glenn says.

It's called at-risk manufacturing and scaling up means being able to produce the hundreds of millions of doses or more that will be needed.

But Novavax is in the vaccine development business. It doesn't have the ability to manufacture those hundreds of millions of doses. So the company has turned to Emergent Biosolutions.

Sean Kirk, executive vice president of manufacturing and technical operations for Emergent Biosolutions, recently took me on a virtual tour of the company's advance manufacturing facility in Baltimore, Md.

His phone camera shows Kirk standing with some colleagues in a corridor next to a large glass window. On the other side of the glass is a room where the Novavax vaccine is being made.

"What you're looking at right here is one step in a multiple step process," Kirk tells me.

He points his cellphone camera into the room. I can see several stainless steel pieces of equipment, each about the size of a commercial refrigerator.

The vaccine is actually generated by living cells called a tissue culture that are grown inside a large plastic bag.

"You can see the bag sticking out the top. Can you see it?" Kirk asks.

When Can We Expect A Coronavirus Vaccine?

Technicians inside the room are loading the bag into a 50-liter vessel that is part of what's called a bioreactor.

"Around the outside of this is the vessel itself that provides the heating, the cooling, and with the inserted agitators, the mixing," Kirk explains. "From here we grow the culture and we transfer it to a larger bioreactor, thousand-liter, two thousand-liter, 4 thousand-liter to be able to expand up the volume and get the yields that we need to successfully produce the doses."

All of this has to be done to strict Food and Drug Administration standards known as Current Good Manufacturing Practices. The process can be finicky.

It's a challenging task, but Kirk says he and his team is up to it. That confidence may be because the company they work for was created specifically to deal with public health crises.

"Emergent Biosolutions has been around for a little over 20 years," says Bob Kramer, president and CEO.

The company specializes in dealing with public health issues and dangerous substances. It makes vaccines for anthrax, smallpox, typhoid and cholera.

Kramer says in 2012, the Department of Health and Human Services asked Emergent to build for them a special kind of facility, "where they could bring new technology into that facility and be able to quickly scale up and manufacture large volumes of vaccines for whatever emerging infectious disease we were presented with."

That facility is where the Novavax vaccine is being manufactured. The company also has agreements to manufacture a vaccine being developed by Vaxart and another by Johnson and Johnson.

On June 1, the government announced it was providing Emergent with an additional $628 million to make and package vaccines.

Kramer says his company has a robust manufacturing capacity.

"We already have the capability to produce hundreds of millions of doses in our existing infrastructure," he says.

But all that infrastructure and all the money that's being spent to expand it will be for naught if the vaccines don't work. It's a gamble health officials say the country has to make.