Accessibility links
Several Coronavirus Treatments Besides Remdesivir Show Promise : Shots - Health News While only remdesivir has been scientifically shown to help treat COVID-19, it is not a particularly effective drug. More drugs like it and fundamentally different ones are in the pipeline. 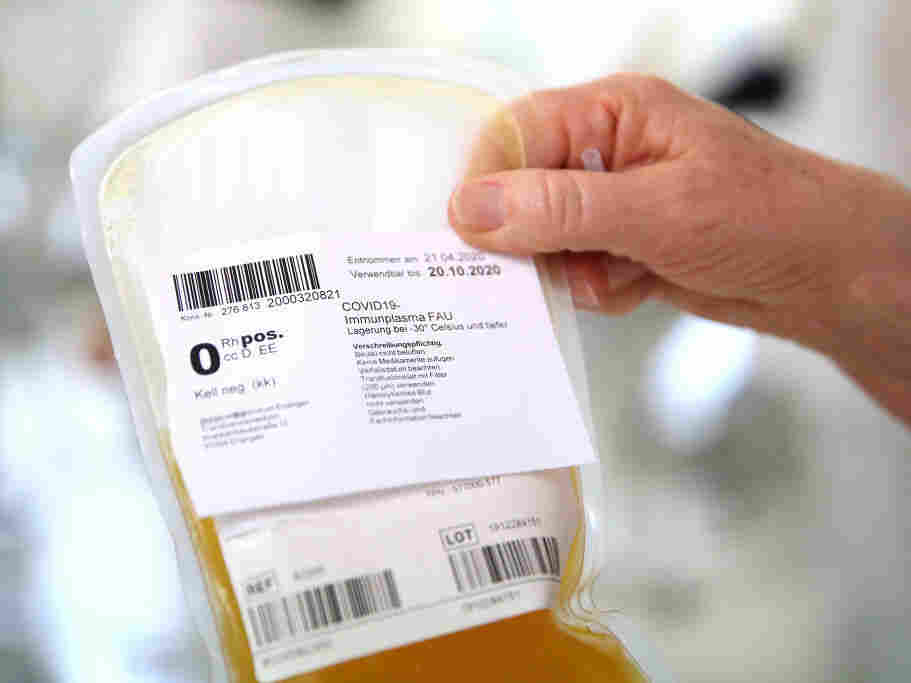 A researcher at the German Center for Immunity Therapy holds a bag containing blood plasma from a recovered COVID-19 patient at the University Hospital Erlangen on April 27, 2020 in Erlangen, Germany. This plasma could be used to treat people with COVID-19. Alexander Hassenstein/Getty Images hide caption 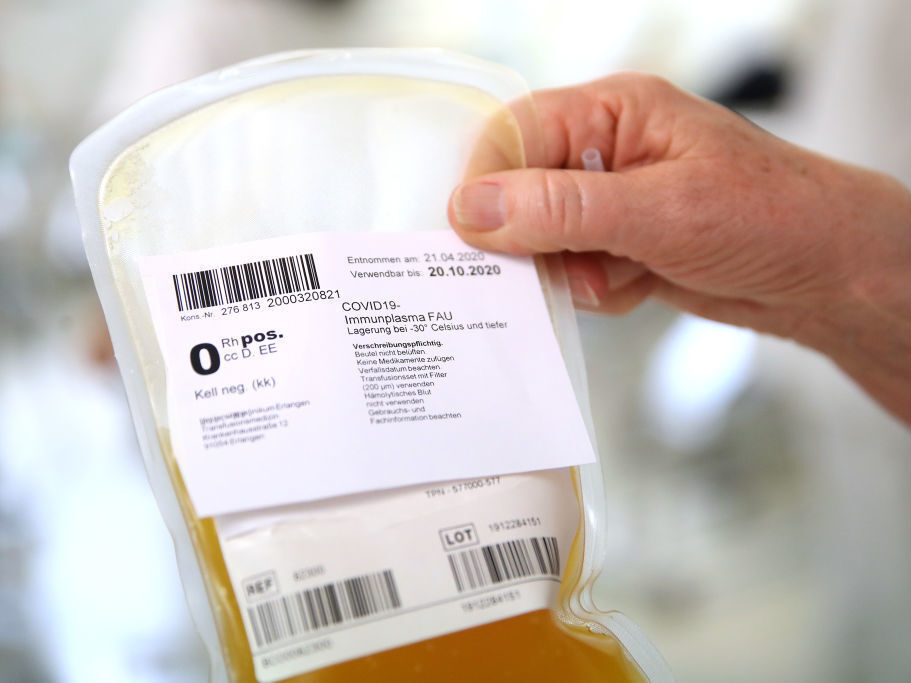 A researcher at the German Center for Immunity Therapy holds a bag containing blood plasma from a recovered COVID-19 patient at the University Hospital Erlangen on April 27, 2020 in Erlangen, Germany. This plasma could be used to treat people with COVID-19.

Right now, there is only one drug shown by rigorous scientific testing to be helpful for treating COVID-19. That drug is the antiviral medication called remdesivir, made by Gilead Sciences. But remdesivir's proven benefits are modest: reducing hospital stays from 15 to 11 days.

So there's an urgent need for better therapies. The good news is that there are some on the horizon. Some are being tested now, some will be begin testing soon, and others are in the beginning of the pipeline.

Researchers are expecting to see a benefit from treating COVID-19 with convalescent plasma. This is plasma taken from patients who have had the disease and recovered. Their plasma contains the antibodies their bodies made to successfully fight off the disease, so the theory goes that giving those antibodies to people currently sick with COVID-19 could help them recover. It's an approach that has been used in the past to treat diseases for which there were no effective medicines, including SARS and Ebola, although results are mixed.

There are several efforts underway to expand the use of convalescent plasma for treating COVID-19 patients even before its benefit has been proven. The Mayo Clinic is leading one effort, Michigan State University leads another.

A similar approach uses something called hyperimmune globulins. These are concentrated versions of the antibodies contained in the convalescent plasma.

In addition to using plasma products for therapies, they might also be used to prevent infection in medical workers and other high-risk individuals.

Remdesivir is what's known as an antiviral drug. It blocks the ability of the coronavirus to make copies of itself and thereby spread through someone's body.

Antiviral drugs that have been used to treat other viral infections including HIV are also being tried for COVID-19, so far without proven success.

But a new kind of antiviral drug that appears promising is called EIDD-2801. It was created by scientists at a not-for-profit biotech company owned by Emory University. Studies in animals have shown it can reduce the symptoms of SARS, another disease caused by a coronavirus. Last month, the pharmaceutical giant Merck signed a collaborative agreement with Ridgeback Biotherapeutics to develop EIDD-2801, which has already begun testing in humans in the United Kingdom. One significant advantage EIDD-2801 has over remdesivir is that it can be taken as a pill rather than intravenously.

Monoclonal antibodies are laboratory-made molecules that can mimic the human immune system's antibodies. They can be used to target cancer cells, or other undesirable cells, such as those that have been infected with viruses. They have been used successfully to treat a wide ranger of diseases, from cancer to rheumatoid arthritis.

From the earliest days on the pandemic, researchers have focused on monoclonal antibodies as a potential treatment.

"There are a variety of monoclonal antibodies in development that look very good," says John Mellors, chief of infectious diseases at the University of Pittsburgh Medical Center.

The first to begin studies in humans is one developed by the Canadian biotech company AbCellera and the pharmaceutical company Eli Lilly.

In a forthcoming paper in the journal Science, company scientists show the cocktail approach can reduce the chance the virus will develop resistance to the drug.

The new drug will be tested both as a treatment for patients with both mild and severe COVID-19 disease, and as a way to prevent people at high risk of getting infected with the coronavirus from developing the disease.

One of the features of the coronavirus that makes it so devastating to human health is its ability to send someone's immune system into overdrive.

Inflammation is a result of the immune system's own efforts to fight off a disease but if that inflammation runs out of control, it can cause severe damage. In the case of COVID-19, that damage is frequently to the lungs, making it hard for a patient to breathe.

There are a variety to drugs already on the market that can be used to tamp down the immune response, and there are existing several drugs being tested on patients with COVID-19. The problem with these drugs is they suppress the immune system, so they may reduce someone's ability to fight off the virus, thereby making the viral infection worse. Clinicians say it will take time to learn when and how much of these drugs to use to be of most help to patients.

It may be possible to design novel drugs for COVID-19 that are different from anything that currently exists. To that end, the White House has launched a The COVID-19 High Performance Computing Consortium. Part of the idea is to create computer models for how the virus infects cells, and then create ways to block that infection process. It's also possible that computing and artificial intelligence could identify existing drugs that could be repurposed to treat COVID-19. It also could be used to track best practices in the way treatments are used.