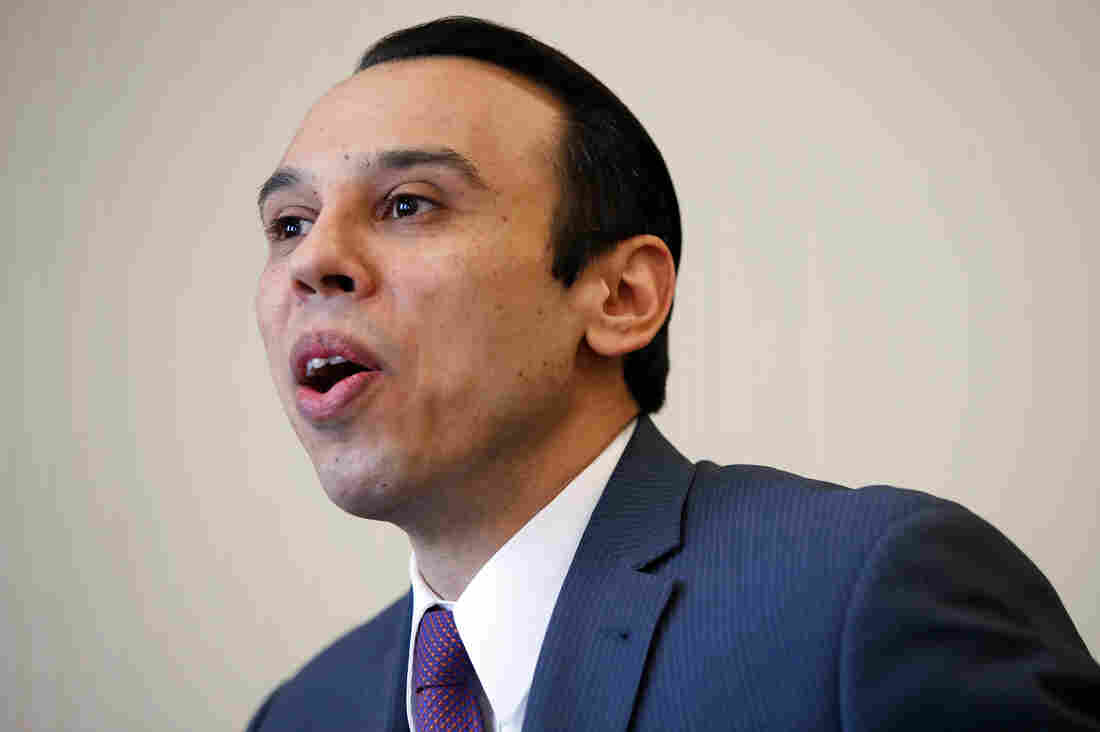 Roger Severino, who directs the Office for Civil Rights in the Department of Health and Human Services, has long argued that "sex discrimination" protections in the Affordable Care Act aren't meant to encompass protections for transgender people. Jacquelyn Martin/AP hide caption 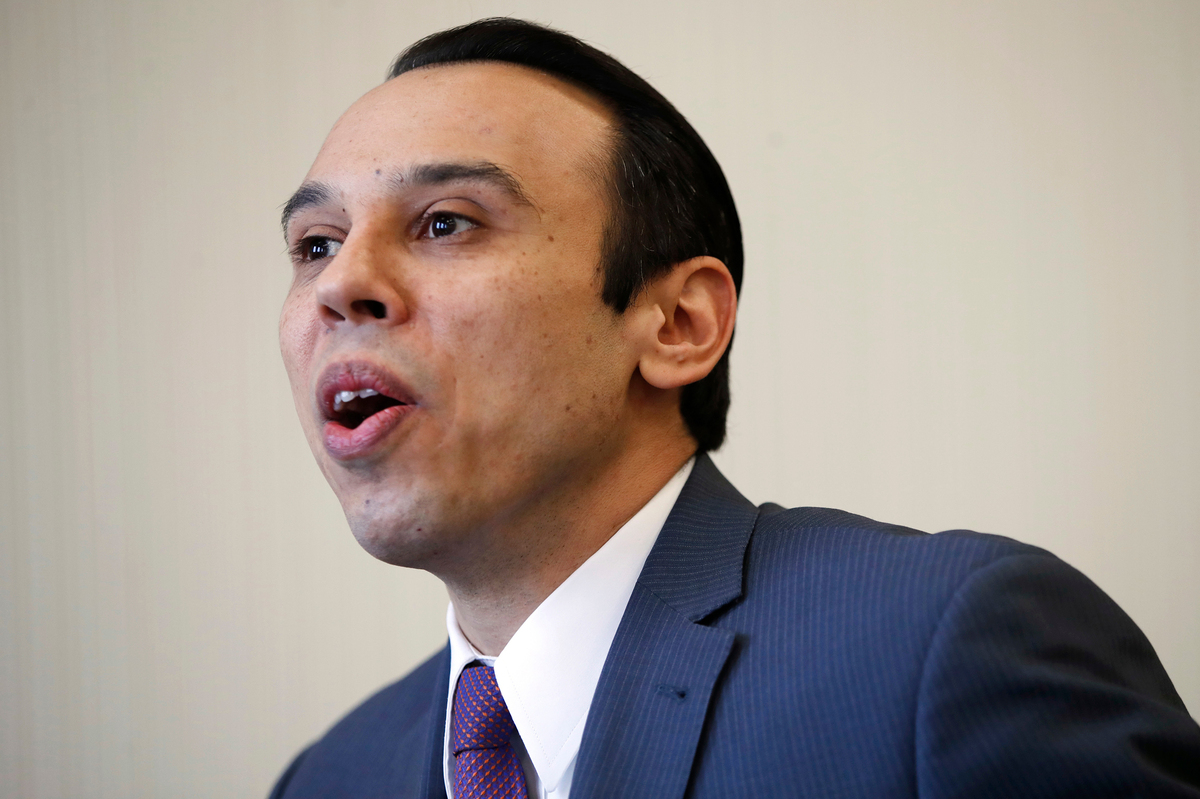 Roger Severino, who directs the Office for Civil Rights in the Department of Health and Human Services, has long argued that "sex discrimination" protections in the Affordable Care Act aren't meant to encompass protections for transgender people.

The Trump administration on Friday finalized a rule that would remove nondiscrimination protections for LGBTQ people when it comes to health care and health insurance.

"HHS respects the dignity of every human being, and as we have shown in our response to the pandemic, we vigorously protect and enforce the civil rights of all to the fullest extent permitted by our laws as passed by Congress," said Roger Severino, who directs the Office for Civil Rights in the Department of Health and Human Services, in a written statement announcing that the HHS rule had become final. The rule is set to go into effect by mid-August.

It is one of many rules and regulations put forward by the Trump administration that defines "sex discrimination" as only applying when someone faces discrimination for being female or male, and does not protect people from discrimination on the basis of sexual orientation or gender identity.

Supporters of the new rule said this is a necessary reversal of Obama-era executive overreach and will reduce confusion about the legal meaning of "sex discrimination." Critics argue the rule could further harm an already vulnerable group — transgender people — in the midst of a pandemic and historic unrest spurred by the killing of George Floyd at the hands of police in Minneapolis.

"I can't help but wonder if the timing [of this rule] is by design so that this is something that people won't pay attention to," said Tia Sherèe Gaynor, a political science professor at the University of Cincinnati.

What the final rule does

The rule focuses on nondiscrimination protections laid out in Section 1557 of the Affordable Care Act. That federal law established that it is illegal to discriminate on the basis of "race, color, national origin, sex, age or disability in certain health programs and activities." In 2016, an Obama-era rule explained that protections regarding "sex" encompass those based on gender identity, which it defined as "male, female, neither, or a combination of male and female."

In June 2019, under Trump, the HHS Office for Civil Rights proposed a rule (the one finalized this week) that reverses the one from the Obama administration.

Severino said at the time, "We're going back to the plain meaning of those terms, which is based on biological sex." He also said the rule could save hospitals and insurers and others $2.9 billion over five years since they will be relieved of the requirement to print notices of nondiscrimination in several languages and include them with any "significant" mailings.

Under the new rule, a transgender person could, for example, be refused care for a checkup at a doctor's office, said Lindsey Dawson, associate director of HIV policy at the Kaiser Family Foundation. Other possible scenarios include a transgender man being denied treatment for ovarian cancer, or a hysterectomy not being covered by an insurer — or costing more when the procedure is related to someone's gender transition.

The Trump rule makes changes to gender-based discrimination protections beyond Section 1557 of the ACA; it affects regulations pertaining to access to health insurance, for example, including cost-sharing, health plan marketing and benefits. The rule could also mean that those seeking an abortion could be denied care if performing the procedure violates the provider's moral or religious beliefs.

Even with the rule now finalized, an LGBTQ person who is discriminated against or denied health care can still sue, and courts may rule that their civil rights were violated in such a case. But that's not an easy avenue, Dawson said.

"Because of limited access to litigation, I think that it's fair to state that the ramifications [of this rule] could be pretty significant," she said. Protections will also vary based on where someone lives, she added, so the rule "creates a patchwork of civil rights, compared to standardized protections."

For Severino, this move has been a long time coming. He joined the Trump administration from the Heritage Foundation, a conservative think tank, where he wrote a paper on gender protections in Section 1557. He's also a devout Catholic and, as director of the Office for Civil Rights, has made protections of religious freedom a key focus, including the right of doctors to refuse to provide care that contradicts their religious or moral beliefs.

The rule the HHS proposed on gender and discrimination in health care garnered 155,966 public comments. The final rule is nearly identical to the original version proposed last year.

Conservative groups, including the Christian Medical Association, the Susan B. Anthony List and the Heritage Foundation, applauded the new HHS guidance.

"Health professionals know they must base medical decisions on biology and science, not ideology," Dr. Jeff Barrows, the Christian Medical Association's executive vice president for bioethics and public policy, said after hearing the announcement.

"We are hopeful that this rule will help steer consideration of gender issues in health care back toward science and away from politics and ideology, back to the protection of professional medical judgment and the freedom to adhere to long-observed ethical and moral standards."

Ryan Anderson, a senior research fellow at the Heritage Foundation and former colleague of Severino's, submitted a comment in support of the rule. Anderson said it simply reverses what he sees as the Obama administration's executive overreach.

"Just for the lawmaking process, it's important that the Trump administration clarify that that's not what Congress had in mind when they used the word 'sex,' " he said.

Critics worry about access to health care, especially in a pandemic

Mari Brighe, a freelance writer and transgender woman who lives outside Detroit, called the rule "terrifying."

"I can relate a decade of stories about getting terrible health care because I'm trans," Brighe said. "We walk into any given health care situation not knowing whether doctors are going to treat us well, whether we're going to get high quality care, whether any given, random health care person is going to be terrible to us."

Once, when seriously ill with the flu and having trouble breathing, Brighe recalled, she was sent home from a hospital in rural New York and ended up driving 90 minutes and crossing a lake by ferry to get treatment at a hospital in Vermont.

She said worries now that the rule could make transgender people — who are already reluctant to seek medical care — all the more likely to avoid coronavirus treatment and testing.

"The way that [the rule] reads to me is that people could refuse to collect your COVID specimen because they don't want to touch a trans person," she said. "That's a recipe for spreading a really terrible pandemic among a really, really vulnerable population."

"I can't help but think about how this impacts black trans people," said Gaynor, the political science professor, who noted that African American transgender people are "arguably the most marginalized group in our country."

African Americans who get COVID-19 are much more likely to die from that disease than are white Americans, statistics show. A recent report from the Williams Institute at UCLA estimates that hundreds of thousands of transgender adults may be especially vulnerable to COVID-19 because they have an underlying condition, are over 65, lack health insurance or live in poverty.

For black transgender people, Gaynor said, "it's layers of oppression — it's transphobia on top of racism on top of economic oppression." All of that could affect their ability to get health care during the pandemic, she said, which in turn could have public health implications for all.

Katie Keith, a health law professor at Georgetown University, noted that the new rule could have another chilling effect. "Even if no one actually does discriminate more because of the rule, you've created a fear," Keith said.

She pointed to research documenting how the "public charge" rule — which penalizes people who are seeking to become citizens if they use public safety net programs such as nutrition and housing assistance — affected people and programs outside the scope of the rule itself.

"When they target these vulnerable populations, you see less enrollment in health insurance," she said. "You see folks scared to go to the doctor."

Although the Heritage Foundation's Anderson supports the rule, he said the prospect that it could have a chilling effect is "a very reasonable concern."

"I don't think any reasonable person wants to see transgender people not enrolling in health care plans and not having access to health care," Anderson said. What's needed, he said, is a "finer grain" approach to this issue — such as a new law in Congress that protects LGTBQ people from health care discrimination generally but carves out protection for providers to refuse to provide care related to sex reassignment.

What's next? a word from the high court and, perhaps, Congress

Now that it's marked "final," this rule — which was issued by an agency of the executive branch — may now encounter hurdles via the two other branches of the federal government.

This month, for example, the U.S. Supreme Court is set to weigh in on two major cases on the meaning of the word "sex" in employment discrimination. The two cases involve issues closely related to the legal questions at play in Severino's HHS rule, and the high court's decision might have major implications for the rule's legal footing.

"It's wild that they're finalizing this rule before we have the Supreme Court decision," Keith said.

Meanwhile, in Congress, House Democrats have already asserted that they strongly disagree with the HHS rule. In early May, Speaker Nancy Pelosi issued a statement that read, in part: "The Administration must immediately abandon this outrageous, un-American plan and give LGBTQ individuals the reassurance that they will never be denied the health care they or their families need."

Now that the final rule is out, Congress does have a way of invalidating it, using the Congressional Review Act. That would only happen in this case if — within 60 days that Congress is in session — Trump were no longer president, and simple majorities in both chambers of Congress voted to block the rule. Even if Democrats win big in November, it's not clear if that's a possibility given the tricky timeline — Congress is typically in recess in August, and the COVID-19 pandemic may complicate matters further

The date at which the final rule would be able to avoid this congressional threat is a moving target, Keith said. "Folks are watching the calendar now [wondering], 'When is that 60-day legislative deadline?' "

What's much more certain, she said, is that there will be lawsuits to try to overturn the rule or block it from going into effect.

On Friday, less than an hour after HHS issued its press release, LGBTQ activist group Lambda Legal said it would challenge the new rule in court.

"Today's rule is a tragically failed public health policy and just flat-out illegal," Omar Gonzalez-Pagan, Lambda Legal senior attorney and health care strategist, said in a written statement. "We will be challenging the rule because at a time when the entire world is battling a dangerous pandemic, which in the United States has infected more than 2,000,000 people and killed more than 116,000, it is critical for everyone to have ready access to the potentially lifesaving health care they need."

Unless someone does file a lawsuit that results in a judge putting the rule on hold, it is set to go into effect 60 days from the date the rule is published in the Federal Register.