Accessibility links
Young Patient In Chicago Gets Double-Lung Transplant For COVID-19 : Shots - Health News A young woman in her 20s was healthy before the coronavirus struck her. After two months on a ventilator and ECMO device, her transplanted lungs are now working. 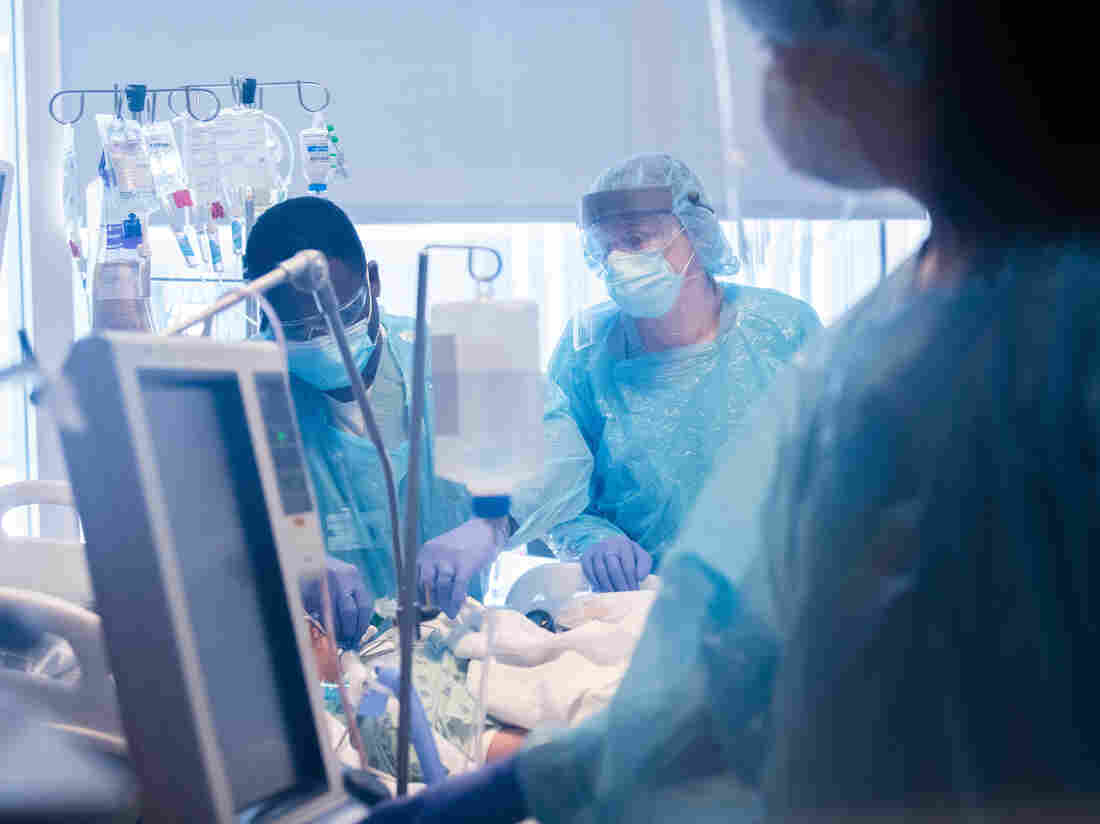 The lungs of a young woman in her 20s became so damaged by COVID-19 that she could not survive without her blood being oxygenated outside her body on an ECMO machine. She received a double-lung transplant on June 5. In this photo taken before the transplant, the patient is being monitored by the ECMO team at Northwestern Memorial Hospital in Chicago. Northwestern Medicine hide caption 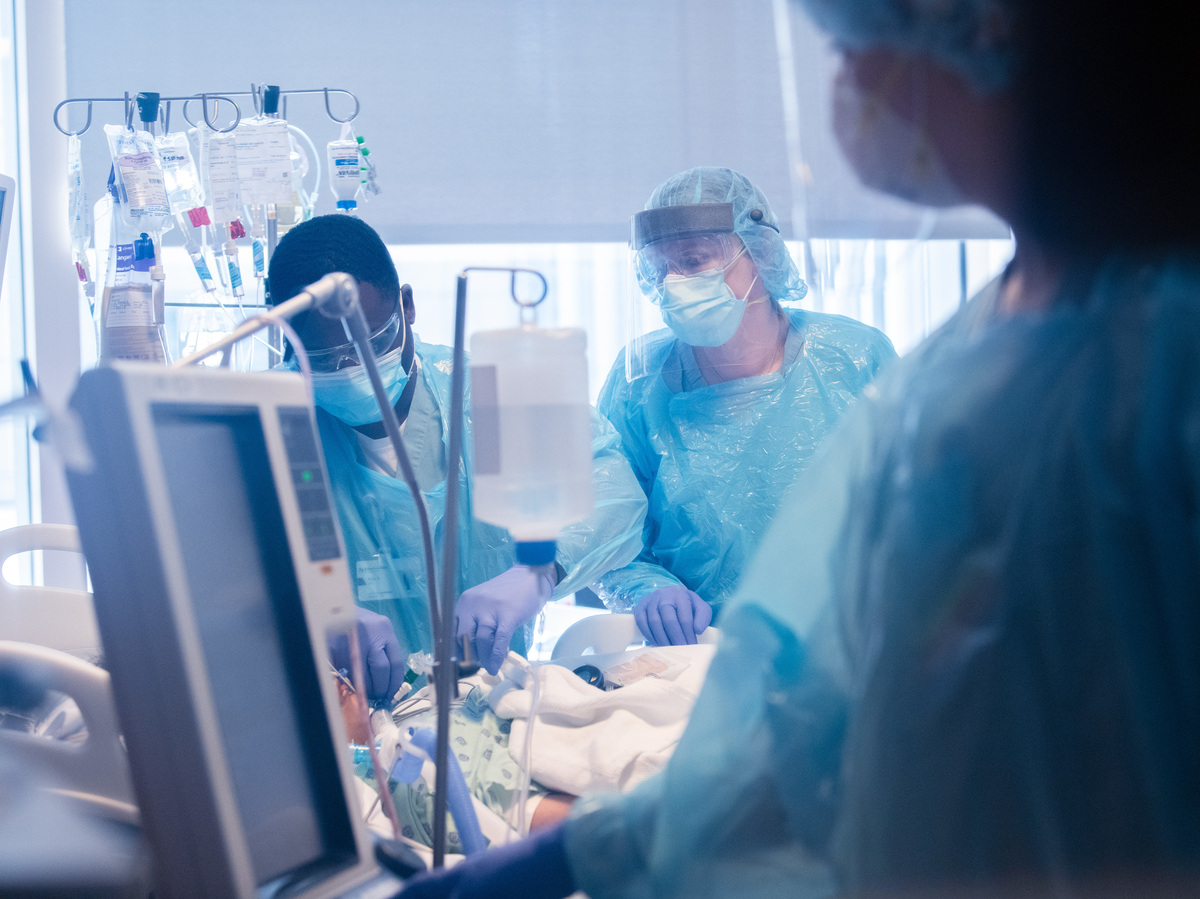 The lungs of a young woman in her 20s became so damaged by COVID-19 that she could not survive without her blood being oxygenated outside her body on an ECMO machine. She received a double-lung transplant on June 5. In this photo taken before the transplant, the patient is being monitored by the ECMO team at Northwestern Memorial Hospital in Chicago.

The woman in her 20s was otherwise healthy but developed a severe case of COVID-19 that resulted in hospitalization, says Dr. Ankit Bharat, Northwestern's chief of thoracic surgery.

For two months, she was in the intensive care unit on a ventilator and another machine, known as ECMO, that pumps and oxygenates blood outside of the body. Although she eventually cleared the coronavirus from her body, she remained in severe condition.

By early June, Bharat says the patient's lungs showed irreversible damage. She was at risk of further decline and began showing signs that her kidneys and liver were starting to fail with no improvement in her lung function.

"As a result of the COVID, she had formed these cavities inside the lung, and those cavities had become infected, and that bacteria was driving sepsis," Bharat says.

Bharat says they determined a double-lung transplant was her only chance of survival.

As a precaution, they performed additional tests to confirm that the coronavirus was no longer present in her body. They placed her on the waiting list for a lung donor, and on June 5 the woman received the transplant. 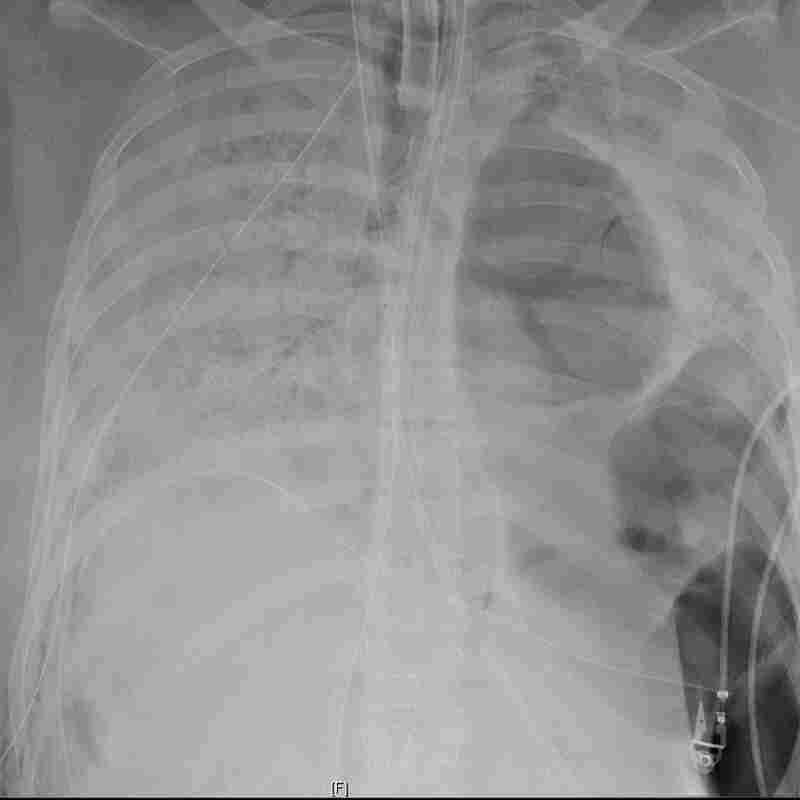 An X-ray of the patient's lungs before the lung transplant. Northwestern Medicine hide caption

"She was so sick. In fact, I can say without hesitation, the sickest patient I've transplanted," Bharat says.

Northwestern Medicine performs 40 to 50 lung transplants a year, and Bharat says he does most of them. Upon studying the COVID-ravaged lungs he removed from the patient, he says he found no viable regions left.

The patient has been making progress since the procedure, he says. Her lungs are now working, and other organs — including her heart, kidneys and liver — have "completely recovered."

On Wednesday, she smiled as she interacted with her mother through FaceTime. The patient's name is being withheld to protect her privacy.

The woman has a long recovery ahead. Bharat says her body started to show antibodies against the transplanted organ, so she has been given medication aimed at preventing her body from rejecting the lungs.

After spending weeks sedated in bed prior to the transplant, she is physically weak. She is not able to stand or take deep breaths on her own, but Bharat says they expect to be able to take her off the ECMO (extracorporeal membrane oxygenation) device, which has been pumping and oxygenating her blood.

"I'm quite confident that she will regain her strength now because the infection is gone and other organs have recovered," Bharat says. "It's just a matter of time." 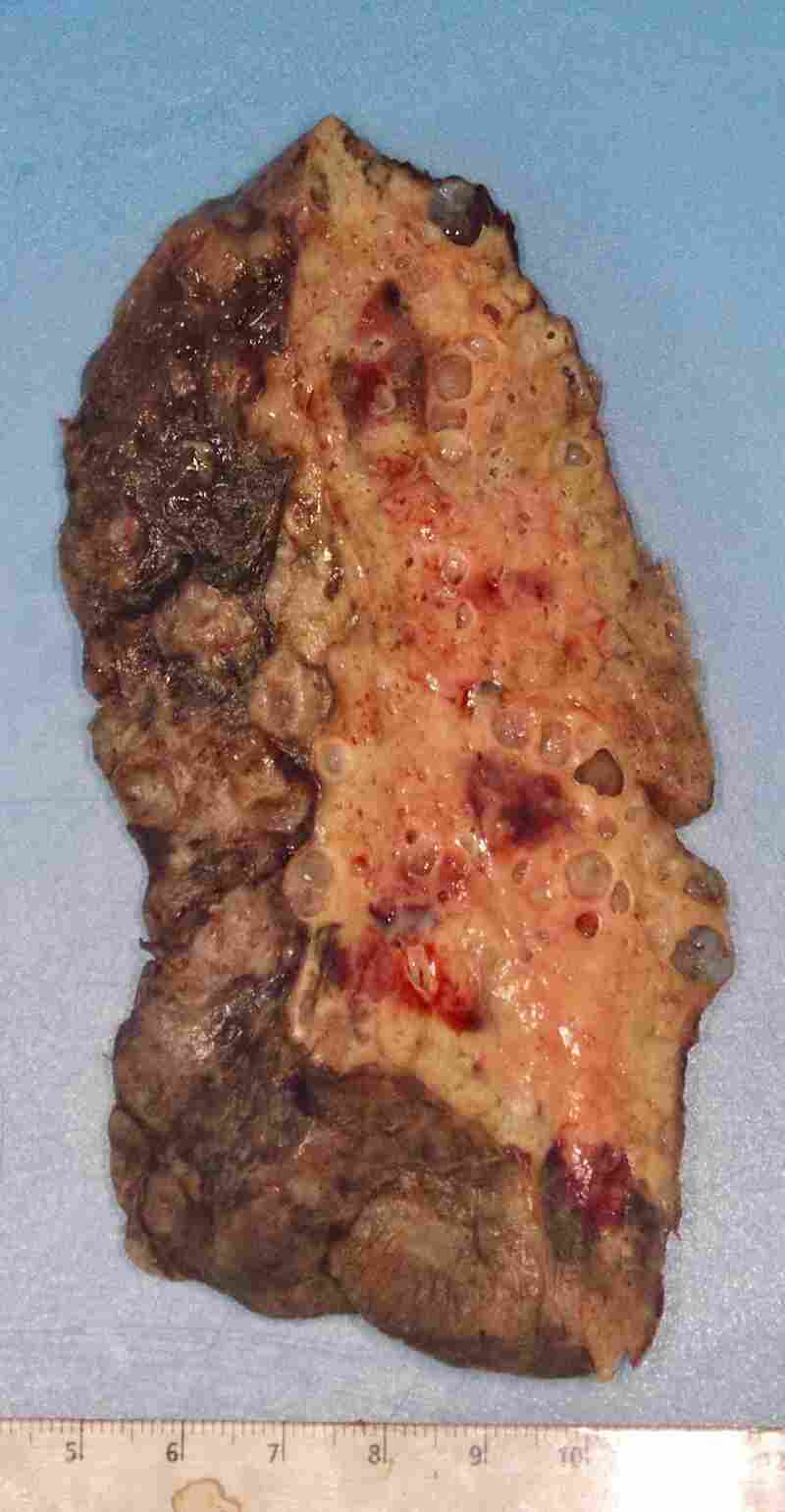 One of the patient's lungs, scarred and damaged from COVID-19, after being removed during the transplant surgery. Northwestern Medicine hide caption

Dr. Elizabeth Malsin is among the physicians in Northwestern's ICU who cared for the patient when she still had an active COVID-19 infection.

"She was so young, and the only thing that was sick about this patient was her lungs and the scarring left from the coronavirus," Malsin says.

The chance of long-term recovery for transplant patients depends on many factors, including what illness they had going into the transplant, she says.

Since they believe this patient to be the first in the U.S. — and among the first in the world — to receive a transplant after having COVID-19, Malsin says there are still many unknowns, but she remains hopeful.

Prior to the COVID-19 pandemic, Malsin says influenza was the most common reason patients would be placed on an ECMO device. In her experience, most patients eventually recover and move off the machines as their lungs heal.

"So there are very few cases where those people have gone on to needing a transplant or qualifying for transplants," Malsin says.

Throughout the COVID-19 pandemic, she says they've seen more people who end up needing to be placed on a ventilator and ECMO device.

Some of them heal and eventually move off the life-support machines and are discharged home.

"And we hope that they continue to recover and regain their strength," she says. "But there are other people that end up like this patient did, and either qualify for transplant or we're continuing to give them more time (on the machines)."

Malsin says some of those patients end up experiencing complications, most commonly infection or injury to other organs such as the kidneys or heart.

"And at that point, if they're not a transplant candidate, sometimes that's what they pass away from," she says.

It's too soon to know how many COVID-19 patients will be good candidates for lung transplants, Bharat says, but it's certainly not an option for every patient who's on a ventilator.

Many won't qualify for reasons such as age and co-occurring health conditions. But he says it could be a life-saving intervention of last resort for some.

Bharat says if providers know that a transplant could be an option, they may feel more comfortable keeping patients on life-support devices as they wait for the virus to clear, instead of withdrawing care.

Due to the technical challenges of performing transplants on severely ill COVID-19 patients, Bharat cautions that the procedures should be reserved for "very experienced centers that have the right team in place."

Bharat says he has already been contacted by health centers across the United States — including in Texas, California and New York — asking whether Northwestern would consider accepting COVID-19 patients for a transplant.

They're now evaluating five patients to determine whether they are candidates for a lung transplant, he says.

Asked whether the current nationwide shortage of organ donations could limit how many eligible COVID-19 patients can receive a lung transplant, Bharat says he's optimistic that if the need grows, the medical community will find strategies to expand the donor pool.

He says less than 15% of donor lung offers are accepted and used for clinical transplantation. The low acceptance rate is due in part to rejection of lungs that are damaged, but Bharat says a technique known as ex vivo lung perfusion can be used to repair some of those organs.

"I think once we have the need, we'll figure out a way to serve those patients," he says.

Even the set of lungs offered for his patient did not meet standards until after the Northwestern team spent 2 1/2 days working to repair it until it was "of exceptional quality for transplant," Bharat says.

The medical team at Northwestern will continue to closely follow the transplant patient, doing all they can to ensure her recovery, he says.

This story is part of NPR's reporting partnership with Illinois Public Media and Kaiser Health News.