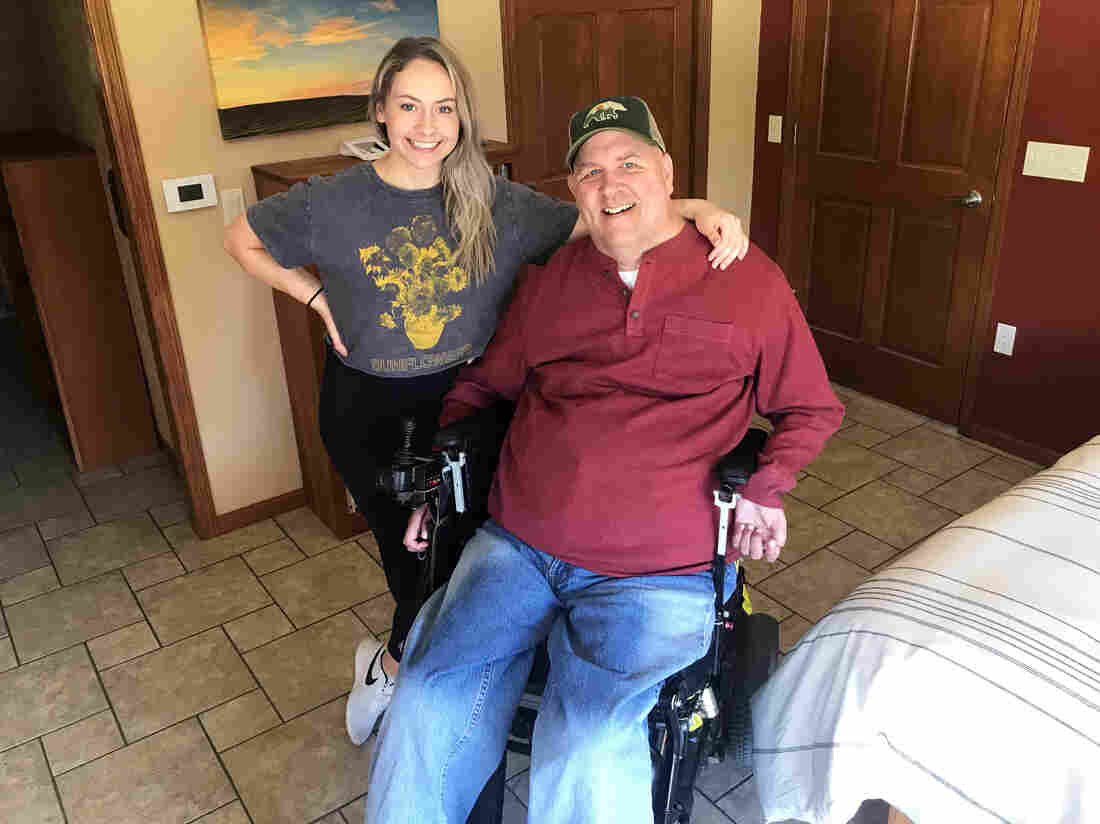 Matt Ford is seen in Verona, Wis., with one of his caregivers, Grace Brunette. An accident in 1987 left Ford paralyzed in all four limbs. He needs help getting in and out of bed, preparing meals, using the bathroom and driving. Brunette recently finished a physician assistant program at the UW-Madison School of Medicine and Public Health. Matt Ford hide caption 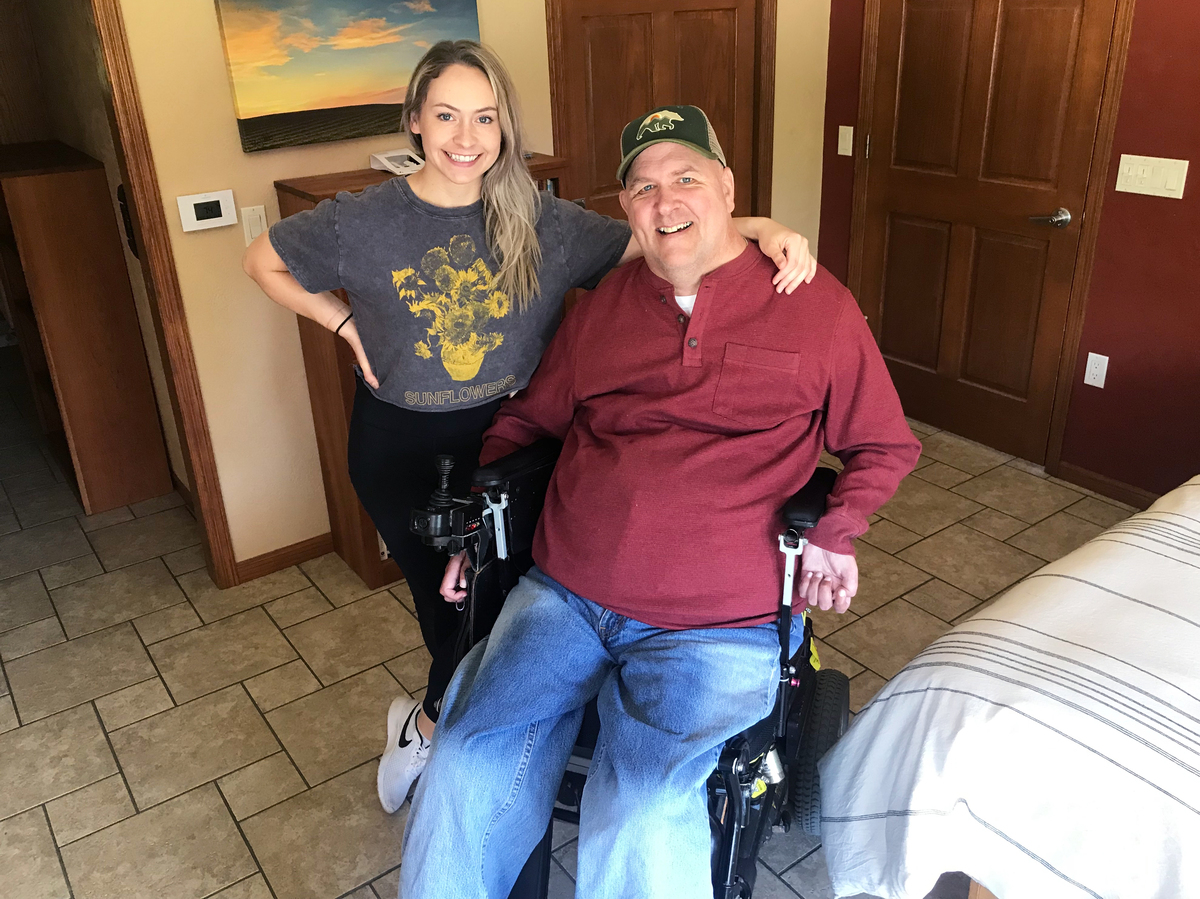 Matt Ford is seen in Verona, Wis., with one of his caregivers, Grace Brunette. An accident in 1987 left Ford paralyzed in all four limbs. He needs help getting in and out of bed, preparing meals, using the bathroom and driving. Brunette recently finished a physician assistant program at the UW-Madison School of Medicine and Public Health.

When the COVID-19 pandemic hit, Stacy Ellingen, 34, of Oshkosh, Wis., lost two of the three caregivers she depends on to dress, shower, eat and use the bathroom. The caregivers — both University of Wisconsin-Oshkosh students — returned to their parents' homes when the university canceled in-person classes.

Ellingen, who lives with complications from cerebral palsy, had little choice but to do the same — moving back to her parents' home in Fond du Lac.

Matt Ford, whose arms and legs are paralyzed, already lived with his 76-year-old father, his primary caregiver, in a specially designed house in Verona. One of Ford's other caregivers decided to move into the basement for a while, since it was easier for her to quarantine at his house, rather than to come and go and risk the chance that she would transmit the virus to Ford.

Jason Endres asked his care workers to stay away from the home he shares with his wife Julie in Eau Claire. With masks hard to come by, Endres feared the caregivers could inadvertently spread the deadly virus, ravaging his lungs, which already had been weakened by spina bifida.

The novel coronavirus, which has infected nearly 13,000 Wisconsinites, has exposed vulnerabilities in the state's health care systems, including those designed to serve older people and disabled residents.

Before the pandemic, Gov. Tony Evers in 2019 created a state task force to address a chronic shortage of caregivers. A report released in February described a "crisis" in the direct care workforce, with 20,655 vacant positions in Wisconsin's long-term-care facilities and residential settings, and an average workforce vacancy rate of nearly 26%.

The pandemic is adding hurdles for residents with disabilities who need caregivers to live and work independently. These visiting aides take on demanding duties and are typically paid about $12 an hour in Wisconsin.

Clients with disabilities and their caregivers are weighing tough choices about how to keep each other safe during close interactions, especially as protective equipment continues to be scarce. Some caregivers have stuck around, others have quit. And many clients who lose their caregivers also lose independence.

Every respondent to an April survey of nearly 500 Wisconsinites with disabilities and older adults said the pandemic had disrupted their caregiving service. Wisconsin Watch conducted a dozen interviews with people with disabilities, their family members, and caregivers across Wisconsin, revealing how the crisis has transformed each life in unique ways.

Help is hard to find

Stacy Ellingen has navigated through life from a power wheelchair since she was a child. Cerebral palsy has also affected her fine motor skills: She uses an enlarged keyboard and eye-gaze system to operate her design firm, Design Wheels, from her apartment in Oshkosh, where she lived independently before the pandemic. That computer setup is a key component of the independent life Ellingen has fought for. But now that she's living with her parents, she doesn't have access to that tool — or lifestyle. 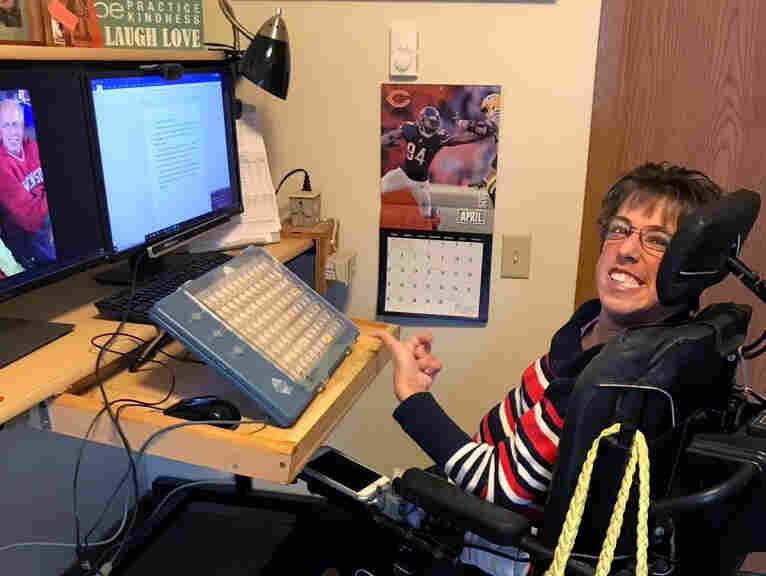 Stacy Ellingen, 34, of Oshkosh, Wis., has used a power wheelchair since the age of two due to complications from cerebral palsy. After the pandemic began, she lost two of the three rotating caregivers she depends on to dress, shower, eat and use the bathroom. Stacy Ellingen hide caption 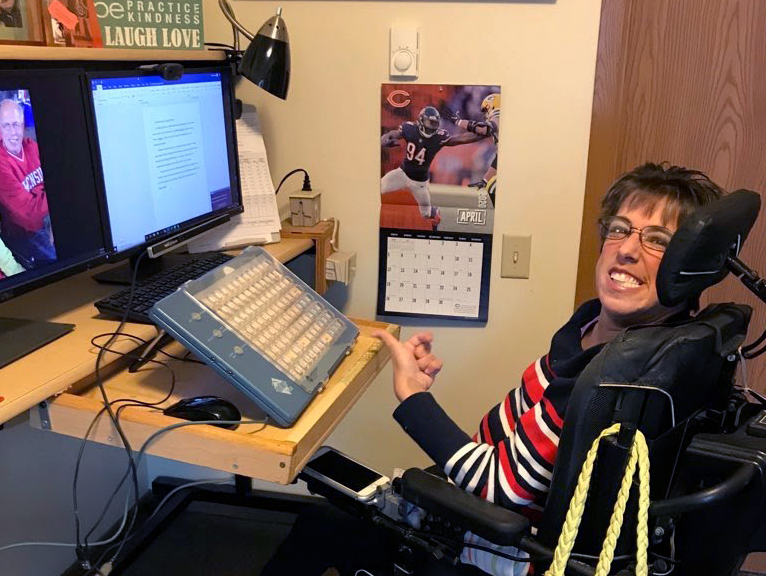 Stacy Ellingen, 34, of Oshkosh, Wis., has used a power wheelchair since the age of two due to complications from cerebral palsy. After the pandemic began, she lost two of the three rotating caregivers she depends on to dress, shower, eat and use the bathroom.

"I'm not able to do much work while I'm at my parents'," Ellingen says. During an interview over Zoom, she used an app on her phone to speak aloud. Ellingen requested interview questions in advance so she would have adequate time to enter her responses in the app.

Ellingen, who is featured in a video about assistive technology, says she could not survive long without caregivers to help her.

"Many times I've skipped meals, gone without using the restroom and slept in my wheelchair because I didn't have a caregiver," Ellingen says.

This is not the first time a lack of help has forced her to return to her parents' home, but Ellingen worries the pandemic will wreak long-lasting damage to an already thin caregiving workforce.

A May survey of 504 providers of disability services conducted by the nonprofit Survival Coalition of Wisconsin Disability Organizations showed costs rising and revenues plunging across the industry. Nearly 20% of surveyed businesses were unsure whether they would survive the pandemic.

In an ideal world, Ellingen says she would have six or seven caregivers to fill work shifts, but that hasn't happened for years. Ellingen was down to just three careworkers at the pandemic's outset, including the two UW-Oshkosh students who have since left town.

University students typically make up at least half of Ellingen's support staff; each rarely stays with her for more than a year.

Ellingen says life with her parents involves major and minor annoyances. She must go to bed when they do — much earlier than she would prefer — lest she be left with no one to lift her into bed. She also has to live with her parents' music, television and food preferences for the family.

Still, Ellingen feels lucky; if not for her parents, she would likely live in a nursing home. The long-term-care sector has experienced at least 6% of Wisconsin's coronavirus diagnoses and more than 40% of deaths from COVID-19

"That's the last place anyone wants to be — especially during the pandemic," Ellingen says.

Matt Ford, 55, also recruits his caregivers mostly from a nearby college campus — the UW-Madison. He typically finds new hires near the end of the spring semester; but not this year, after the pandemic sent students home early.

Paralyzed in a diving accident in 1987, Ford needs help getting in and out of bed, preparing meals, using the bathroom and driving. His father provides most of that assistance, plus two or three additional workers take shifts at his home.

"I just started putting in there: 'Grass-fed, free-range quad needs help,' " Ford says with a chuckle. ("Quad" is short for quadriplegic.)

Grace Brunette noticed the listing in spring 2016, when she was a UW-Madison senior. She has worked for Ford on and off since then.

Brunette is now finishing her studies in a physician assistant program at the UW School of Medicine and Public Health. When the pandemic struck, she no longer felt comfortable splitting her time between her apartment and Ford's house. She moved into Ford's basement to minimize contact with outsiders, including her own family. The basement was designed specifically to accommodate a live-in aide — a need that seems inevitable as Ford's father ages.

After spending the entire first two weeks quarantining in Ford's house, Brunette now stays over three nights a week. Why stay during the pandemic?

"He only has one other caregiver. That would be really selfish of me to just say, 'Sayonara, I'm going to go quarantine with my family,' when he needs the help," Brunette says.

In May, the Wisconsin Supreme Court sided with Republican legislative leaders to strike down Democratic Gov. Tony Evers' Safer at Home order. The decision made Ford bristle at the thought that Wisconsinites could begin to take the pandemic less seriously. In an amicus brief filed before the ruling, advocacy groups argued that if the order were lifted, there would be increased risks of coronavirus infection to older adults and to people with disabilities.

"It does feel a little personal that no one is recognizing the efforts that we made — as vulnerable people who need caregivers in and out of our homes — and the sacrifices that the caregivers made," Ford says.

"I don't want people to go out of business either," Ford adds, referencing the push to re-open the state. "I do care about them. I have some empathy toward that. But I also don't want to die."

Brunette is still working for Ford, but the public health crisis makes it unclear how long she will remain. She was set to start clinical rotations as part of her physician assistant training in June, which would have taken her out of town — making her unavailable to work with Ford. But when a planned trip to Belize with her classmates was cancelled and her clinical rotations for school were moved online, she stayed on the job.

As of now, her next rotation is scheduled to begin in August. Someone will need to fill Brunette's shifts during the fall. Ford says that is typically one of the hardest times to recruit student caregivers.

Like many people with disabilities in Wisconsin, both Ellingen and Ford serve as de facto employers for their caregivers, meaning they are responsible for providing personal protective gear. They each get two boxes of gloves every month, paid for by the state's Medicaid program. But Ford says he is struggling to get gloves from his supplier because of the surging demand during the pandemic.

Masks are even tougher to find. A relative of Ellingen offered to sew some cloth face-coverings for her workers. Ford finds masks at the doctor's office, where he might sneak out one or two after routine appointments. His other source is a neighbor with a carpet cleaning business. As businesses reopen across Wisconsin, advocates are calling for the state to prioritize caregivers in distributing protective equipment. Gov. Evers announced a $100 million grant program for health care providers, including caregivers, in late May.

The lack of masks has not dramatically altered either Ford's or Ellingen's caregiving plans. It is a different story for Jason Endres and his wife Julie in Eau Claire.

"It's really one of the big reasons why we haven't had anyone come into the home," Endres says. Without a ready supply of masks, they feel uncomfortable inviting even familiar workers into their home, considering that many of them visit multiple clients or other work sites.

Endres, 45, has reason to be cautious, considering his spina bifida-linked scoliosis. Endres had rods inserted into his back as a teenager, but his spine remained somewhat crooked — and that spinal curvature has weakened his lungs.

Jason's wife Julie has cerebral palsy. Both use power wheelchairs in their ranch-style home, which was built to accommodate their needs.

Their decision to keep caregivers away from the house has added challenges during the pandemic. Take the task of changing bed sheets, for example: While a worker might finish in a matter of minutes, it takes the couple more than an hour to complete that chore.

"She would do it once a week," Jason Endres says of one of the workers who helps the couple. "We're lucky if we do it twice a month."

As the pandemic continues, uncertainty is eating Endres up inside: "Are we going to live in this limbo for the rest of our lives? Is that going to be changing for the better or for the worse?

"I agree that we need to get the economy going," Endres adds. "But safety's got to be first."