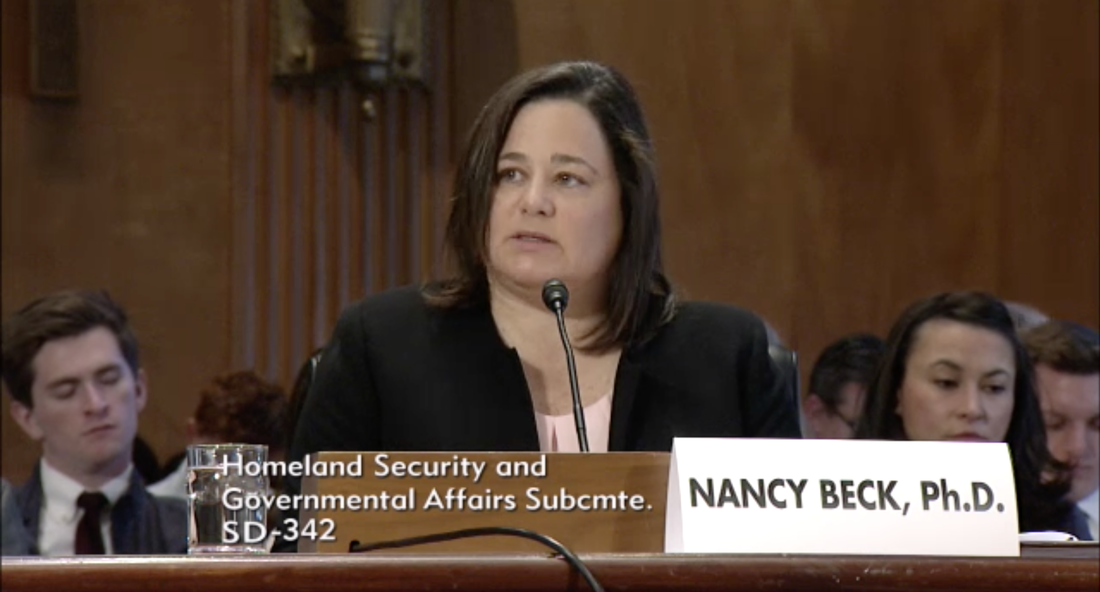 Nancy Beck testifies in front of the Senate in 2017 when she was a senior policy director at the American Chemistry Council trade group. President Trump nominated Beck to head the Consumer Product Safety Commission.

The CPSC is the top federal consumer watchdog in the country. Its five-member board, which Beck will lead for seven years if she is confirmed, is responsible for reviewing safety information and collecting injury reports for more than 15,000 types of products, from baby toys to sports equipment to home appliances.

The Trump administration cited Beck's scientific training and long career working on science and health policy for the federal government in its nomination announcement. But many scientists and public health experts say Beck has not adequately protected the public from toxic chemicals and pollution over the course of her career.

"When I heard that Nancy Beck was nominated to head the CPSC, I was truly and profoundly concerned," says Rachel Weintraub, the legislative director for the Consumer Federation of America, which advocates for safe products. "[Beck's] record is one of thwarting consumer protections, mostly in the realm of toxic chemicals."

Beck's scientific and regulatory track record will be front and center when she goes before the Senate on Tuesday, especially given that the commission she is nominated to lead has struggled over the years to accurately assess the risks posed by common products, including crib accessories and flame retardant chemicals.

Neither Beck nor the EPA responded to questions about her work at the agency and her nomination to lead the Consumer Product Safety Commission.

Beck has stymied or blocked bans of a host of hazardous chemicals since she arrived at the EPA in 2017. That includes the carcinogen asbestos, as well as dry cleaning and paint stripping chemicals the agency has known for years are dangerous and even deadly.

For example, a common dry cleaning chemical, trichloroethylene or TCE, is associated with a higher risk of some cancers, and scientists have known since at least the 1960s that TCE exposure can be deadly. Two other chemicals commonly used in paint strippers — methylene chloride and n-methylpyrrolidone or NMP — are known to be similarly dangerous to human health. Since 1980, more than 50 suffocation deaths have been attributed to methylene chloride. The same qualities that make the chemicals good at removing grime and paint also make them good at replacing oxygen in the lungs, leading to suffocation.

When Beck took over chemical regulation in 2017, the EPA had already said it intended to ban at least some uses of all three chemicals because of the dangers they posed to the public. Beck delayed or reversed course on all three. Today, TCE and NMP have not been banned, and a narrow ban exists for methylene chloride.

"Nancy Beck's role basically was to come in and be a wrecking ball," says Brian Wynne, whose 31-year-old brother Drew died of methylene chloride exposure in 2017 while he was using a common paint stripper at his coffee plant in Charleston, S.C. The Wynne family met with Beck after Drew's death and asked her to finalize a broad ban on the chemical as soon as possible to prevent more deaths.

It took two more years for the EPA to act, and in the end the ban was narrow. In 2019, the EPA eliminated retail sale of methylene chloride. By then, most major retailers had voluntarily removed the chemical from their shelves out of concern for consumer safety.

"I think people have the understanding or the feeling that these officials will operate on their best interests," says Wynne, "and it's clear that Dr. Beck would not be doing that."

Many of Beck's former colleagues support her nomination to lead the Consumer Product Safety Commission.

"She has a proven track record of putting the American public first," says Jon Corley, a spokesperson for the American Chemistry Council, the chemical industry group where Beck worked as the senior director for regulatory science policy for five years before joining the EPA.

Beck also spent 10 years at the Office of Management and Budget (OMB) during the Bush and Obama administrations. There, she helped federal agencies assess the health risks posed by hazardous chemicals and pollution.

"Her track record of sticking to the science and data, even when it's not easy to do so, is why she's served the public so well," says Heidi King, who worked with Beck at OMB and is the former acting administrator of the National Highway Traffic Safety Administration.

"I can't think of someone who has a better scientific background and knowledge, and someone who carefully looks at the evidence and evaluates it," says Katherine Wallman, who served as chief statistician of the United States from 1992 to 2017 and was Beck's supervisor. "I consider Nancy someone who is able to be a scientist, basically, but also to deal very effectively with people in policy positions."

But Beck has also repeatedly clashed with scientists over her approach to incorporating scientific data and research into government rules and regulations.

While she was at OMB, Beck helped draft a document that was meant to aid federal agencies such as the EPA and Department of Energy in using scientific data more reliably and objectively to protect public health. Before the document could be released, it was reviewed by a panel of top epidemiologists and toxicologists at the National Academy of Sciences.

The panel returned a scathing review. It warned that the document misrepresented or misconstrued numerous basic principles of toxicology and public health research and incorrectly represented the role of uncertainty in scientific findings.

"They described it, ultimately, as fundamentally flawed and simplistic," says Daniel Rosenberg, a senior attorney at the Natural Resources Defense Council. "The panel unanimously called for that bulletin to be withdrawn, which it was."

Wallman doesn't see the episode as a failure for Beck. She says asking experts to weigh in on technical policy documents is a standard and rigorous approach, even when the feedback is negative. OMB ultimately decided not to issue the guidance that Beck helped draft.

Recently, scientists raised the alarm again, this time about a proposed rule the EPA put forward under her watch. The rule would restrict the type of research used to write environmental and public health regulations by giving preference to studies that are based solely on publicly available data.

Air and water pollution regulations rely in part on large studies that use anonymized health data to examine the effects of common contaminants on everything from cancer to respiratory disease. As it is currently written, the proposed rule gives less weight to such studies, in favor of studies for which complete raw data is available. Scientists worry it will lead federal regulators to undervalue some of the most important epidemiology research, and could even undermine existing health rules.

The editors of six prominent scientific journals, which are responsible for peer review and publication of scientific studies, warn that the rule is "a mechanism for suppressing the use of relevant scientific evidence in policy-making, including public health regulations."

Beck's approach to assessing health risks will likely come up when she goes before the Senate on Tuesday. If Beck is confirmed, one of the first issues she'll consider is a potential ban on flame-retardant chemicals that are associated with thyroid and immune problems and are used in a wide variety of products including furniture and children's products. The commission has struggled for years to turn mounting scientific evidence that the chemicals are hazardous into enforceable rules.