Accessibility links
Meatpacking Workers Are Getting Tested — But Some Say Not Often Enough : Shots - Health News Thousands of meatpacking workers have been infected with the coronavirus. Some of their employers now are rolling out large-scale testing, and their experience may offer lessons for other businesses. 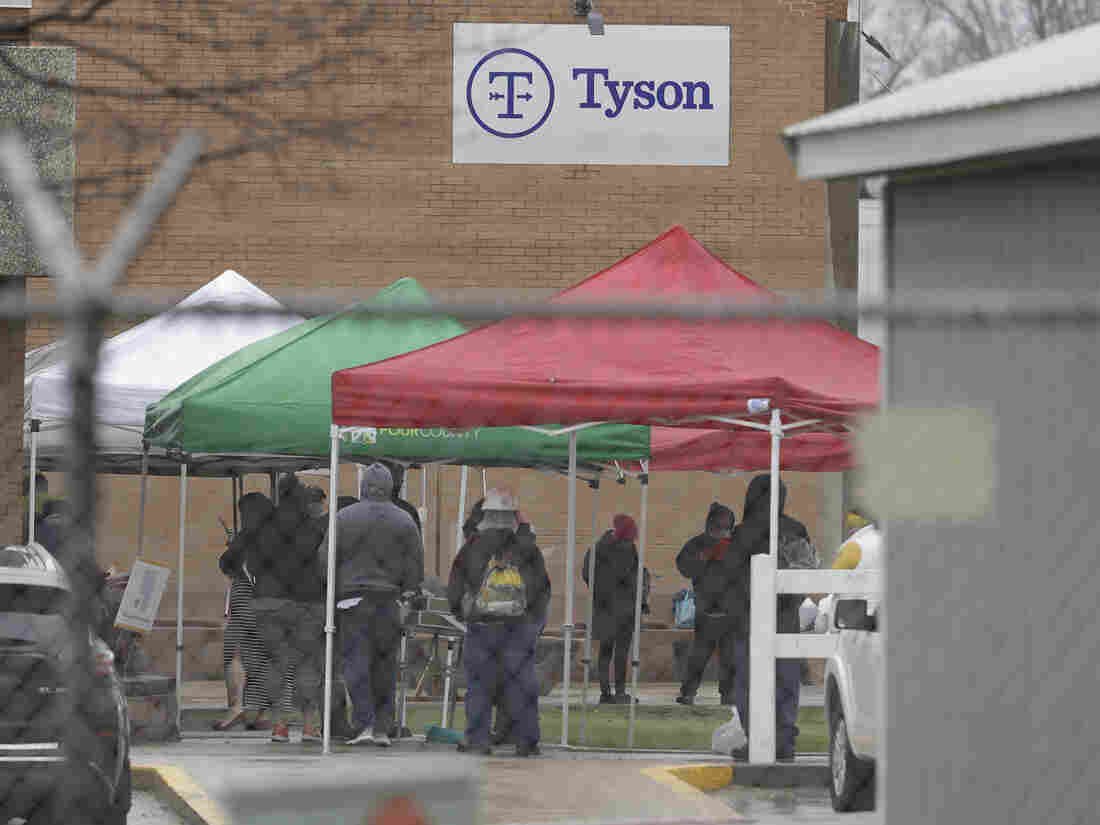 Tyson tested every worker at about 20 of its plants, including this one in Logansport, Ind., after workers got sick. The company is now considering ongoing random testing to try to keep outbreaks from flaring. Darron Cummings/AP hide caption 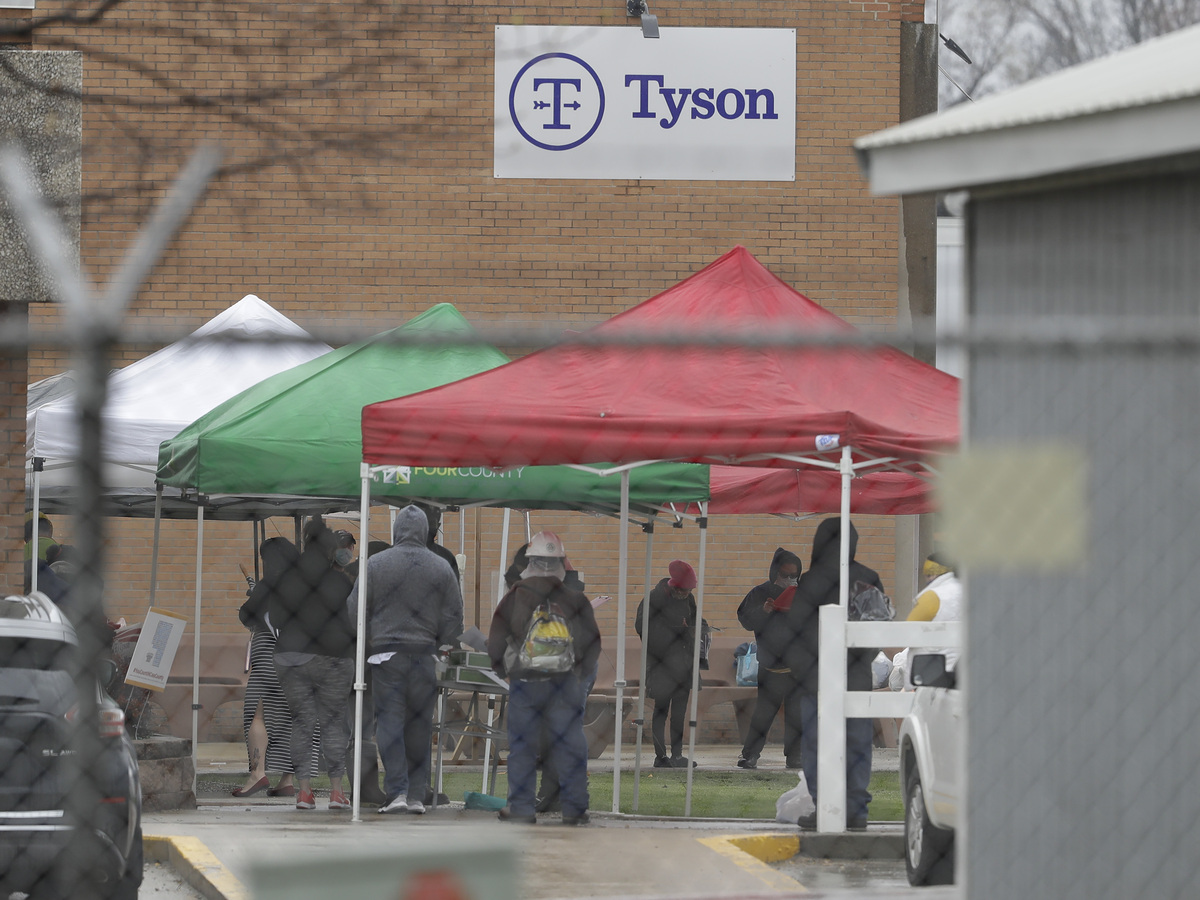 Tyson tested every worker at about 20 of its plants, including this one in Logansport, Ind., after workers got sick. The company is now considering ongoing random testing to try to keep outbreaks from flaring.

Back in April, the Tyson Foods pork processing plant in Waterloo, Iowa, was a poster child for corporate failure to protect workers from the coronavirus. Dozens of plant employees every day were showing up in clinics with symptoms of COVID-19. Nafissa Cisse Egbuonye, the public health director for Black Hawk County, Iowa, where the plant is located, recalls telling plant managers: "There is a huge volume [of cases]. There is an outbreak!"

At the time, no one knew the scale of the outbreak. Cisse Egbuonye told Tyson's managers that they needed to test every single one of their employees: "You have to get a sense of what's going on in the plant."

So in late April, Tyson shut down the Waterloo plant temporarily and asked plant employees — all 2800 of them — to come to the plant's parking lot and allow someone to stick a swab up their nose.

"Yeah, we had to take dramatic measures," says Scott Brooks, a senior vice president at Tyson.

When it was all finished, about a thousand workers at the plant had tested positive for the virus. Hundreds of them had no COVID-19 symptoms. Without testing, they would have continued going to work together in close quarters, potentially spreading the virus.

Since then, Tyson has carried out one-time tests of every worker at almost 20 of its facilities, from Maine to Virginia and Texas. "We're somewhere around 30,000 people, team members, that have been tested," says Brooks. "That's about a quarter of our workforce."

Meatpacking plants have been among the country's worst coronavirus hot spots, with thousands of workers infected. Dozens have died. But the rapid roll out of testing among workers in those plants could offer lessons that other businesses may need to emulate as they try to re-open.

Tyson is not alone among meat companies in its program to test workers, but it has released the most information from those tests. It also has brought in an outside company, Matrix Medical, to run the program. It appears to be one of the largest privately run coronavirus testing programs in the country.

Dennis Medbourn, a union steward at Tyson's plant in Logansport, Ind., also got tested in late April. "Had a swab up the nose; it wasn't fun, I'll tell you that," he says. "At that time, I was not feeling sick."

But a few days later, while he was waiting for those test results, he lost his sense of smell and started getting constant headaches. He wasn't surprised to hear that he's tested positive, along with close to 900 others. Fortunately, his was a mild case.

This has been the story at one plant after another. Most of the people who test positive seem healthy at the time, with no symptoms of COVID-19.

In one extreme example, Tyson says that 199 workers at a poultry plant in Springdale, Ark., tested positive — and only one of those people showed symptoms of the disease.

Workers who test positive have to isolate themselves. If they still haven't developed symptoms after 10 days, they can go back to work. The Centers for Disease Control and Prevention says that by then, they likely can't infect anybody.

Getting those virus-carrying workers away from their colleagues, and isolated at home, seems to have paid off with a big reduction in coronavirus cases— although Tyson executives and public health officials also give credit to changes inside the plants. Those measures include face shields, more social distancing in break rooms and lockers, and plastic dividers to separate workers on the production line.

In Black Hawk County, Nafissa Cisse Egbounye says new coronavirus cases at the Tyson plant are way down. "Actually, today is our first day [when] we've had zero — a zero increase in cases," she told NPR on June 15.

Yet even Tyson's big testing push may only be a start. Meatpacking plants are at the leading edge of a debate about how many people to test, and how often, in businesses and schools.

A one-time test is only good for the short term, because workers can pick up the virus the very next day.

Mark Lauritsen, the top health and safety official for the United Food and Commercial Workers International Union, is demanding every worker get a rapid coronavirus test every day, similar to what workers in the White House reportedly get. "We really do have to get to some sort of daily testing mechanism for all the essential workers in this country," he says.

Many of his union workers are still afraid to go back to work, he says. Testing would make it much less stressful, if they could "look around the plant, or look around the locker room, or the break room, and ... know that everybody inside these walls is COVID-free," he says.

The director of health for the city of Nashville, Tenn., Michael Caldwell, dealt with a coronavirus outbreak at a Tyson plant right outside his city, in nearby Goodlettsville. He says that right now, it's not feasible to test every worker at such a plant every day.

He does, however, advise companies to do regular random testing of at least some employees, to detect any new waves of infection that might be sweeping through the workforce. "I've told this to Tyson, I've told it to construction sites, I've told it to nursing homes and I've told it to restaurants," he says.

Brooks, the Tyson Food executive, says his company is planning to carry out such "sentinal testing" of employees in its plants. Tyson hasn't yet decided how large of a random sample will be tested, or how often.