Accessibility links
How Germany Is Containing Its Outbreak With Contact Tracing : Shots - Health News Staff in over 400 call centers in Germany work around the clock to notify people if they've been exposed to a positive coronavirus case. The country aims to have one contact tracer per 4,000 people.

Listen · 3:31 3:31
How Germany Staffed Up Contact Tracing Teams To Contain Its Coronavirus Outbreak 3:31 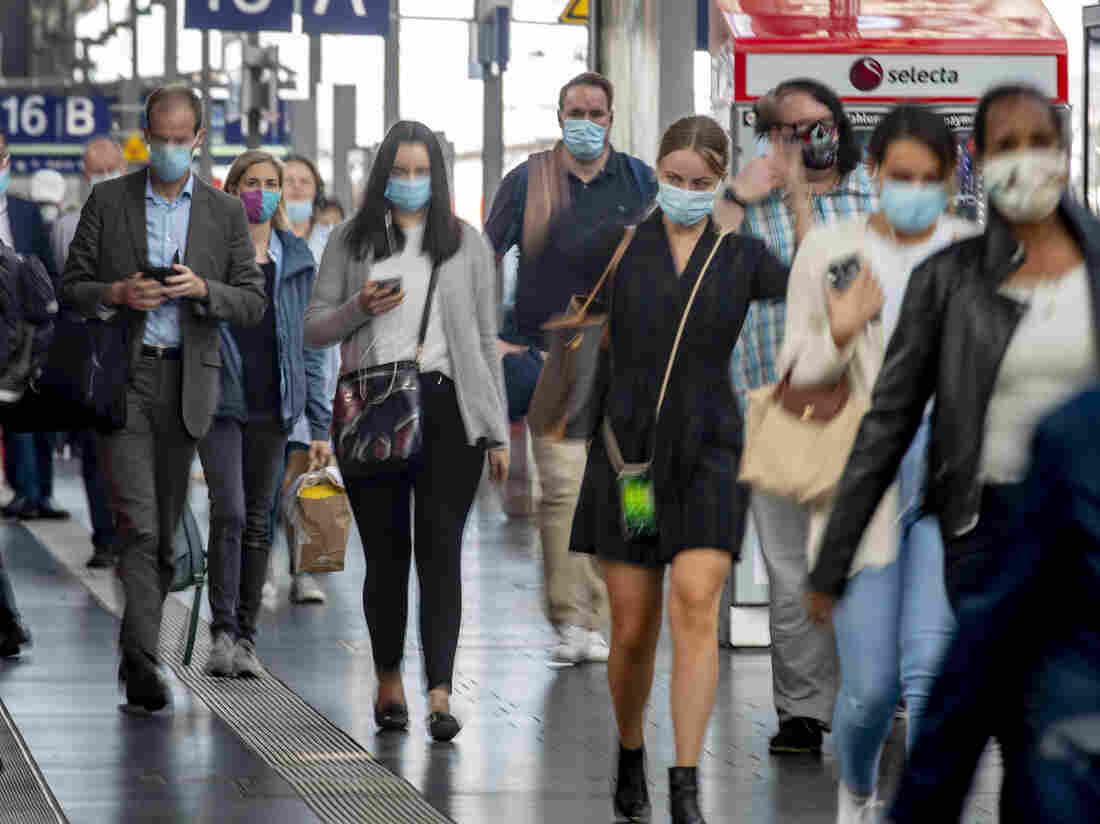 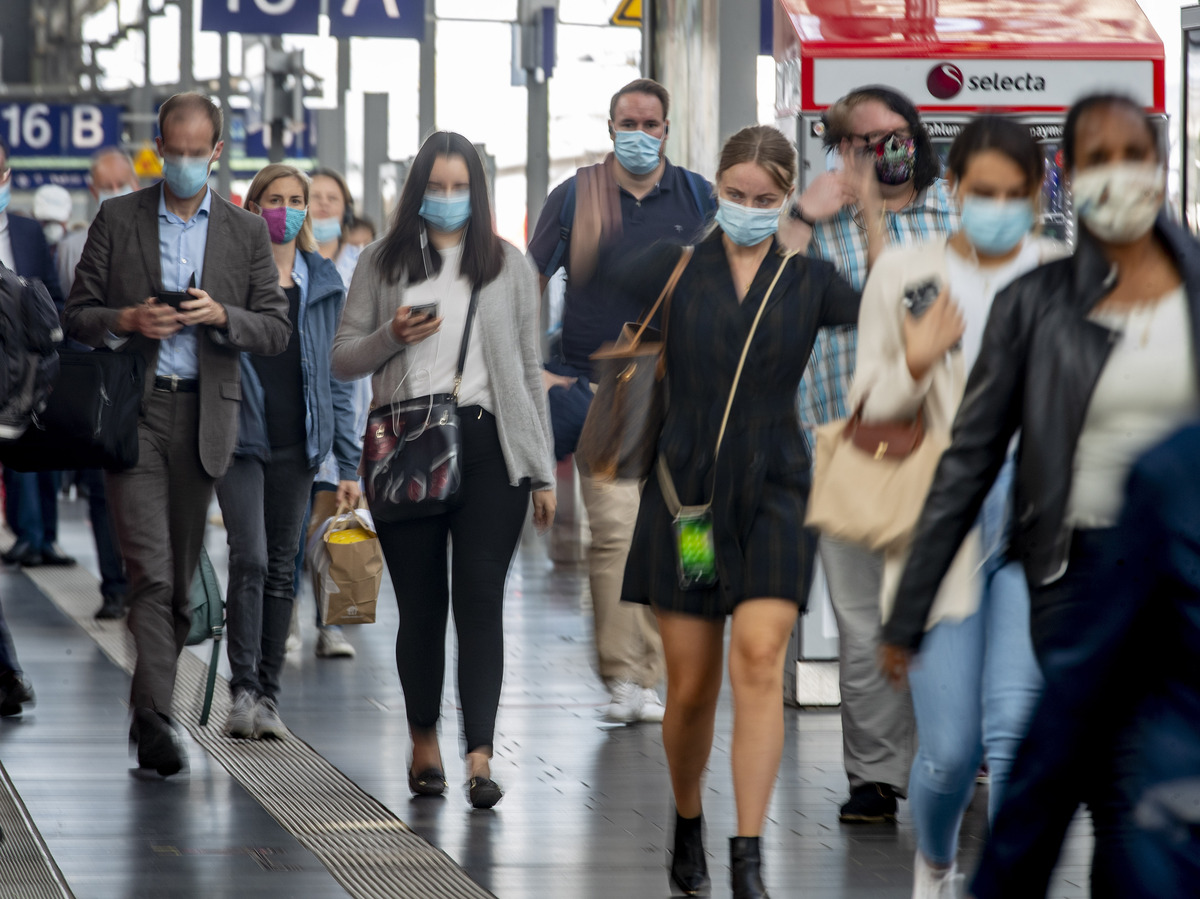 People leave a train at the central station in Frankfurt, Germany, on Thursday.

Germany, a country of more than 83 million people, has flattened its coronavirus curve, dropping from a peak of more than 6,000 new cases a day to just around 600 now. Contact tracing by telephone is one tool the country has relied on.

"Public Health Authority, Pankow," says an operator, answering her phone before the first ring is over and identifying the Berlin district where she works. "So," she confirms with the caller, "you've had contact with someone who's tested positive."

She asks for the name of the infected person, types it into her computer, and the caller's name appears on her screen as someone the contact tracers were about to call.

"Did you spend more than 15 minutes at close contact with this person?" the operator asks. The caller tells her they went for a walk.

Across Germany, there are about 400 call centers like this one, each filled with dozens of operators fielding calls from worried citizens, taking first steps at contact tracing and referring callers to medical personnel. 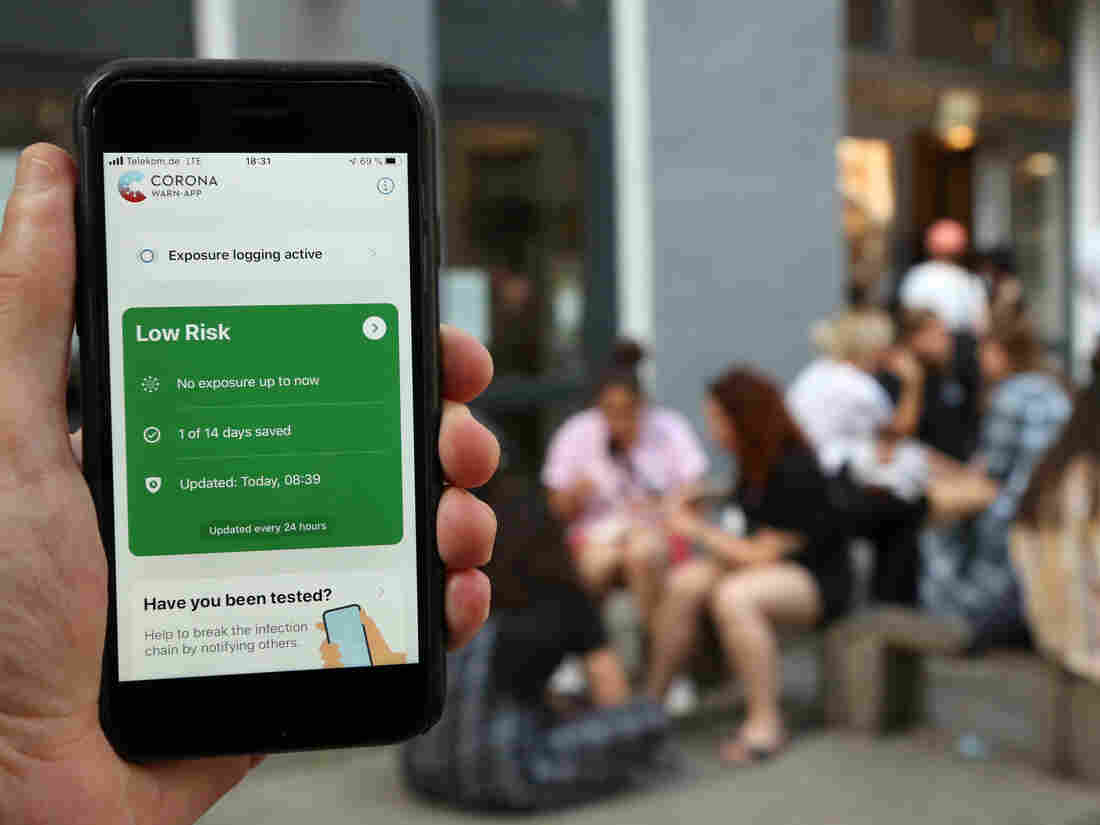 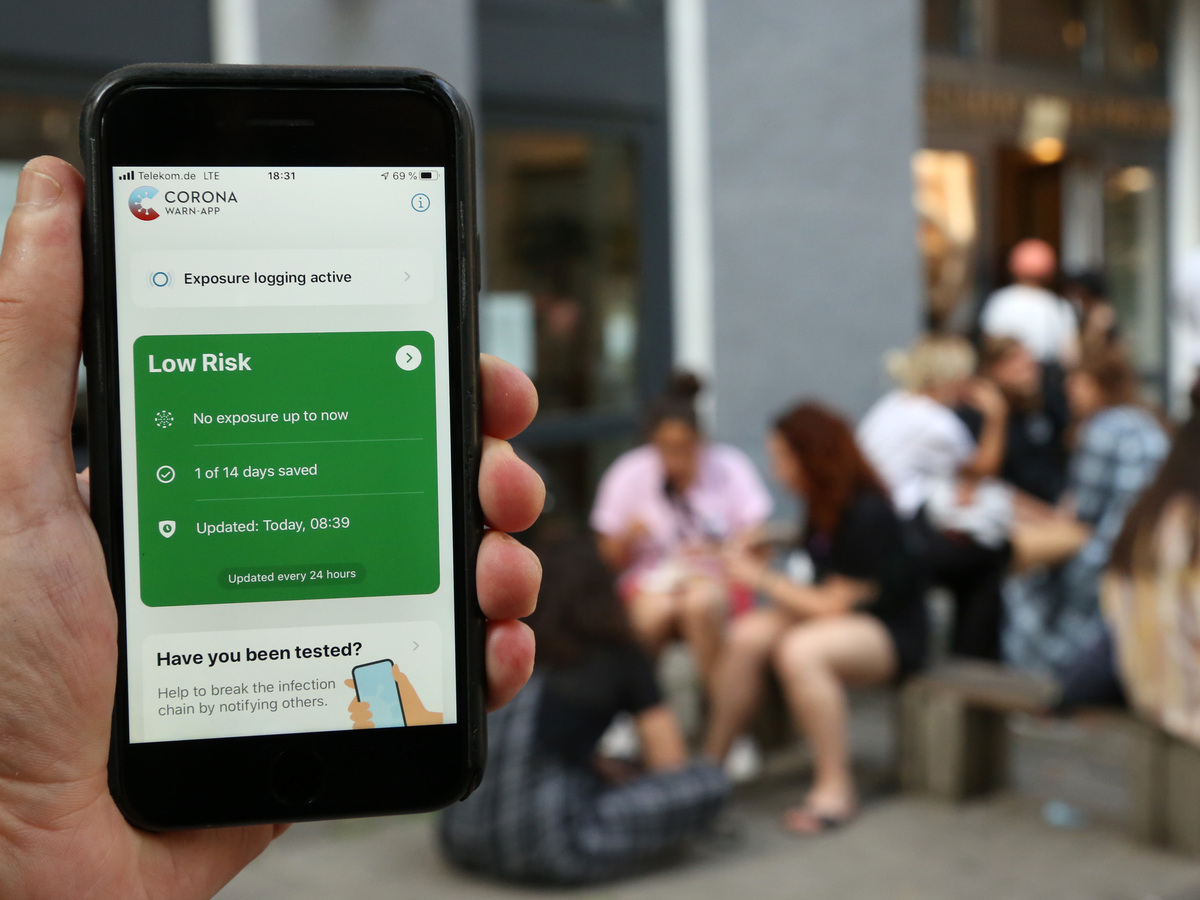 Along with other European leaders, German Chancellor Angela Merkel has prioritized tracking infection chains as the key to slowing the spread of COVID-19. Germany has confirmed more than 190,000 cases of the coronavirus and nearly 9,000 deaths, but the spread of the virus has slowed to about 600 new cases a day, prompting the government to reopen most businesses while issuing social distancing rules in public.

Merkel aims for the country to have one tracer per 4,000 people — nearly 21,000 tracers for Germany's population of 83 million.

"We've recruited staff from other district authorities, including social services, but we also have traffic wardens and librarians working for us," says Dr. Uwe Peters, director of the Pankow district health authority. "We've even recruited gardeners from parks and recreation. They all help man the hotline. We also have students helping out and we're about to be allocated five soldiers as well."

Peters says that when the pandemic hit, he scrambled to hire tracers, transferring many from other district offices that had been shut down because of the pandemic and doubling his staff to around 300 workers.

As Germany's case numbers rose in March, Peters had to train his recruits to trace every infection in their district. Tracers start with confirmation of a patient's positive coronavirus test — the public health authority is the first to be informed. Then they call the infected person and make a list of each person they've had contact with since they first had symptoms.

How Do You Do Contact Tracing? Poor Countries Have Plenty Of Advice

"Sometimes it's a short list, like only close family, and sometimes it's a really long list," says Dr. Claudia Krummacher, a pediatrician who manages a team of tracers at the call center in Pankow.

"And then, basically, you have to contact all the people on the list, everybody on the list, and try to try to find out" the level of contact they've had with the infected person, she says — "which is a little bit like detective work."

Krummacher says if anyone on the list had contact within 6 feet of the infected person for more than 15 minutes, they're put under state-mandated quarantine at home, called every day by tracers and, if necessary, tested for the coronavirus. If they test positive, the whole tracing cycle begins again.

At the height of the pandemic in April, she says, it seemed as if the work would never end. Her office occasionally handled a case of an infected schoolteacher, which meant they had to talk to the parents of hundreds of students, asking the same questions over and over.

"One teacher had contact with 400 students," says Krummacher. "It could also be a midwife working at the hospital, having close contact to many, many women. There are all sorts of constellations."

Krummacher's husband is also a front-line health worker in a neighboring district. They work through each weekend because, she says, the coronavirus doesn't take weekends off. They spend long hours away from their three young children, who are the first to be dropped off at their day care and schools and the last to be picked up.

As States Reopen, Do They Have The Workforce They Need To Stop Coronavirus Outbreaks?

The sacrifice is worth it, she says.

"We cut back on our grown-up private time, so to speak, in the evenings," she says. "Of course, we are doing the work that's left over from the day. So there's not much of a social life right now. I miss meeting with my friends. I miss spending time with my husband. But I think as long as it's just for a defined period of time, we can manage. I realize that it's really important work we're doing to try to stop the pandemic."

This week, Krummacher and her colleagues suddenly had help from the government's new contact tracing app that uses GPS and Bluetooth technology to trace coronavirus infections. It has been downloaded more than 10 million times. But before the app's launch, Krummacher told NPR she wasn't sure how it would affect her work.

"It's not really clear what we will do with this information," she said of the data the app will relay to health authorities like her.

Because of Germany's strict data privacy laws, the names of those who report themselves as infected won't be used. This makes Krummacher nervous.

"How do we make sure that the person pressing the button for 'I've tested positive' is not just doing it for fun, like a hoax?" she said.

Back at the Pankow health authority, the operator discovers the friend of an infected person has symptoms, too. She dispatches a medical team to conduct a test.

"You'll be under quarantine for 14 days, effective immediately," she says. "This means no visitors, no going to your mailbox, no going to the supermarket. Do you have someone who can pick up groceries for you?" she asks.

Esme Nicholson contributed to this report.