Accessibility links
Experimental CRISPR Treatment For Sickle Cell Disease Appears Effective : Shots - Health News Since receiving a landmark treatment with the gene-editing tool CRISPR, a sickle cell patient has the strength to care for herself and her children — while navigating the pandemic. 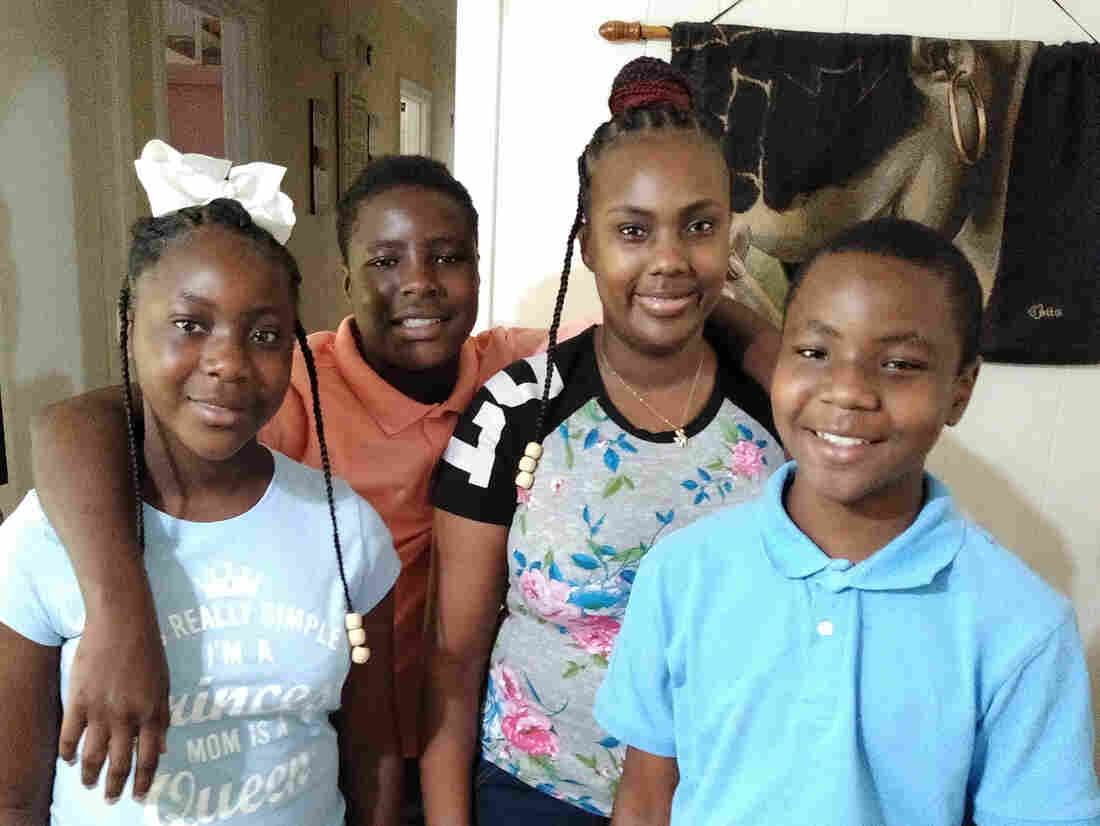 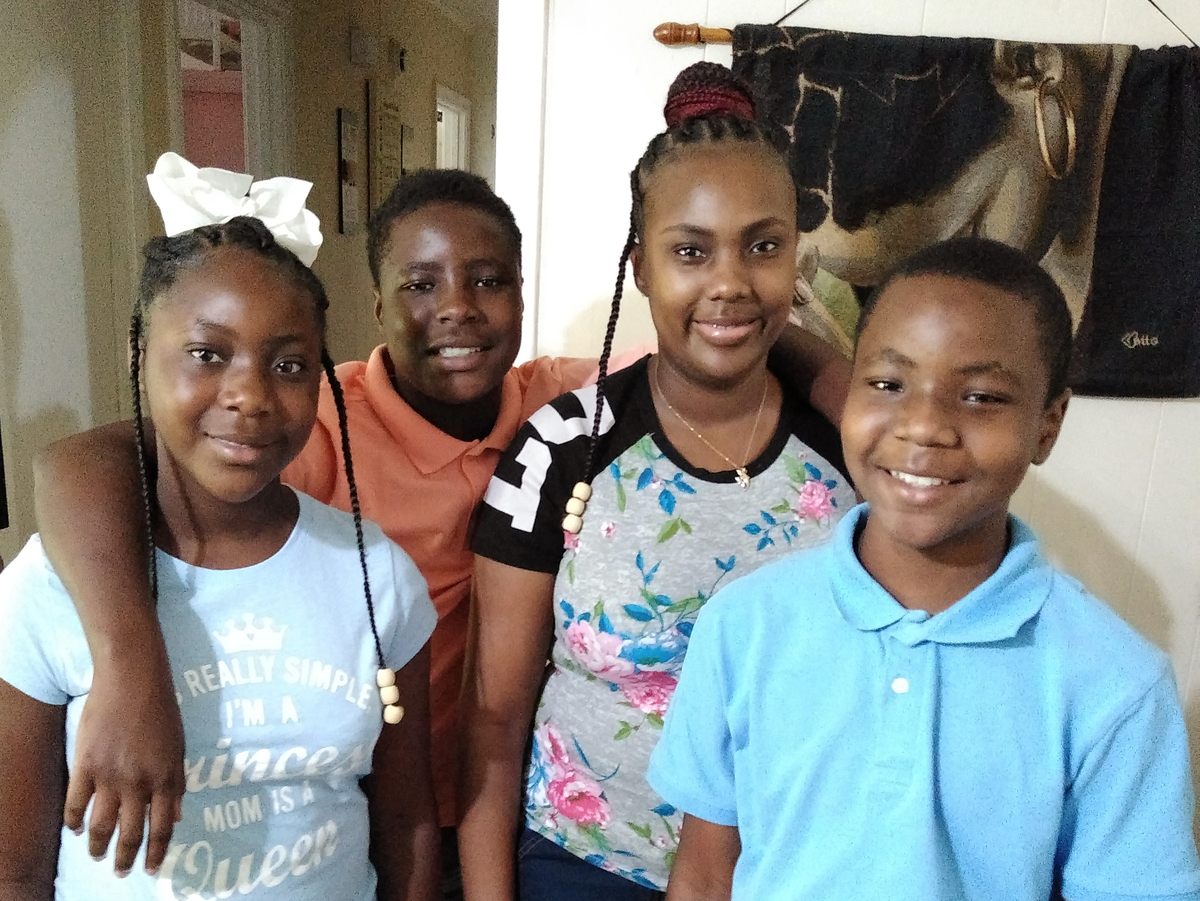 Victoria Gray, who underwent a landmark treatment for sickle cell disease last year, has been at home in Forest, Miss., with her three kids, Jadasia Wash (left), Jamarius Wash (second from left) and Jaden Wash.

Like millions of other Americans, Victoria Gray has been sheltering at home with her children as the U.S. struggles through a deadly pandemic, and as protests over police violence have erupted across the country.

But Gray is not like any other American. She's the first person with a genetic disorder to get treated in the United States with the revolutionary gene-editing technique called CRISPR.

And as the one-year anniversary of her landmark treatment approaches, Gray has just received good news: The billions of genetically modified cells doctors infused into her body clearly appear to be alleviating virtually all the complications of her disorder, sickle cell disease.

"It's wonderful. It's the change I've been waiting on my whole life," Gray told NPR, which has had exclusive access to chronicle her experience over the past year.

Sickle cell disease, a rare blood disorder that disproportionately affects African Americans in the U.S., can be difficult to treat effectively.

The last time NPR spoke with Gray — in November — her doctors had just gotten the first hints the treatment might be working. Now, after nine months of careful testing, the treatment shows no signs of waning, making her doctors more confident than ever the experiment has been a success.

"It's hard to put into words the joy that I feel — being grateful for a change this big. It's been amazing," said Gray, 34, who lives in Forest, Miss.

In many ways, it's a change that came just in time, Gray said. In the fall, the National Guard deployed her husband to Washington. And then, the coronavirus pandemic triggered a national lockdown. Gray was suddenly home alone with three of her kids.

Her great-aunt as well as the pastor of her childhood church died of COVID-19. Friends at her current church have been getting sick.

And then George Floyd was killed by police in Minnesota.

"I feel like everything happened so fast," she said. "It hasn't been easy."

If she hadn't had the treatment, Gray said she doesn't know how she'd be coping. She would have been too weak to care for her children and probably would have been hospitalized at a time when hospitals feel especially unsafe.

The promise of a cure

The researchers conducting the study Gray started caution that it's too soon to reach any firm conclusions about the long-term safety and effectiveness of the approach. Gray is just one patient who has been followed for what is still a relatively short period of time, they noted.

But Gray's experience so far, along with two other patients who received the same treatment for a similar disorder, indicate the therapy has been effective for her and may work for other patients as well, they said.

"To have it work in this way is extremely thrilling to see and extremely exciting," said Dr. Haydar Frangoul of the Sarah Cannon Research Institute in Nashville, Tenn., who is treating Gray.

At a meeting of the European Hematology Association on June 12, Frangoul and other researchers presented the latest results of their latest testing of Gray as well as two study subjects with a related condition, beta thalassemia. The latter also appear to be benefiting.

"It's very exciting," said Dr. David Altshuler, chief scientific officer at Vertex Pharmaceuticals in Boston, which is developing the treatment with CRISPR Therapeutics in Cambridge, Mass. "Patients and families have been waiting a very long time for a highly effective therapy."

The companies also revealed that a second sickle cell patient had been treated as part of their research program along with three other beta thalassemia patients.

The promising results are also encouraging other doctors and researchers, who hope CRISPR may also lead to new treatments for many diseases. Studies have already tested CRISPR to treat cancer and a rare genetic condition that causes blindness. CRISPR enables scientists to make changes in DNA much more easily than before.

"I think this is a huge leap for the medical field," Frangoul told NPR in an interview. 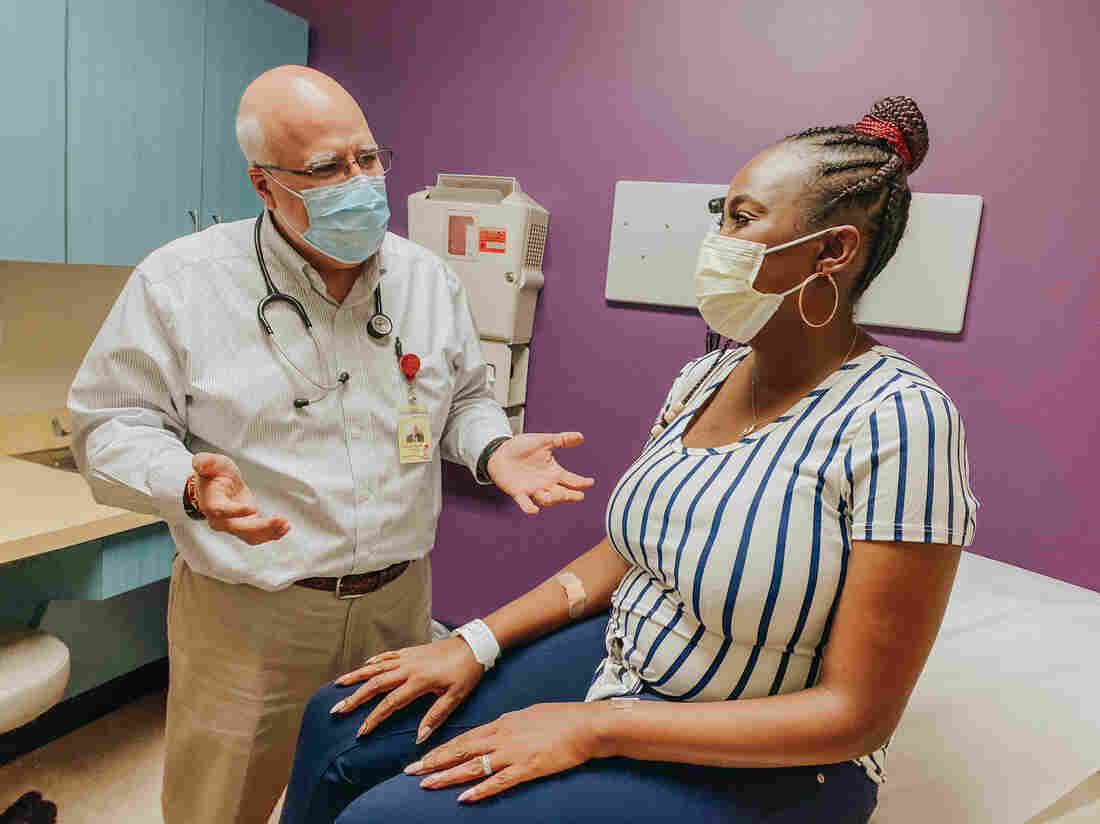 Dr. Haydar Frangoul met with Gray in June to discuss the results of her latest tests. Gray hasn't had any of the severe pain attacks she used to experience since receiving infusions of genetically altered cells nearly a year ago. Amanda Stults/Sarah Cannon/TriStar Centennial hide caption 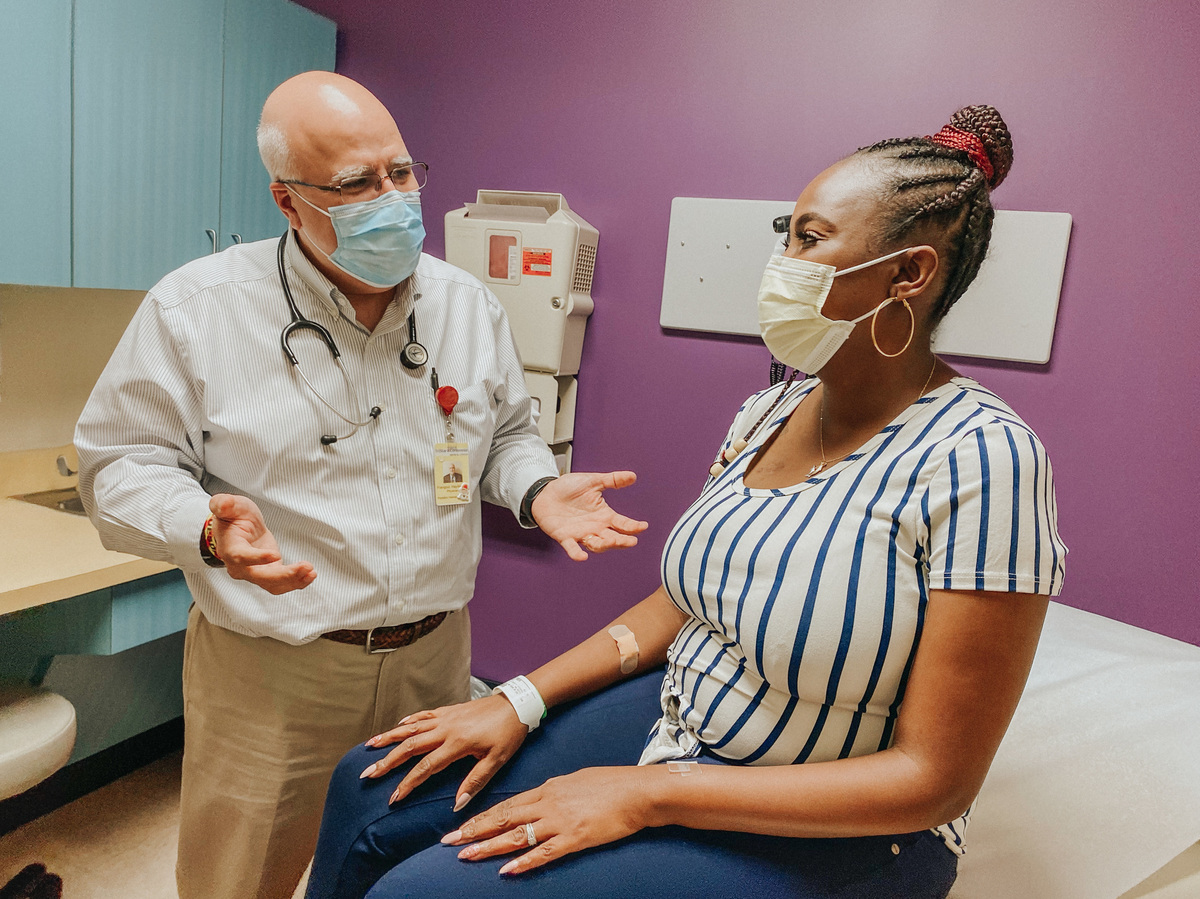 Dr. Haydar Frangoul met with Gray in June to discuss the results of her latest tests. Gray hasn't had any of the severe pain attacks she used to experience since receiving infusions of genetically altered cells nearly a year ago.

How the treatment works

Sickle cell disease is caused by a genetic mutation that produces a defective form of hemoglobin, a protein needed by red blood cells to nourish the body with oxygen. The defective hemoglobin turns red blood cells into deformed, sickle-shaped cells that get jammed inside blood vessels, causing excruciating attacks of pain, organ damage and often premature death.

"Before the treatment, it would be so bad it would be crippling," Gray said of her pain crises.

For the experimental treatment, scientists remove cells from patients' bone marrow and use CRISPR to edit a gene, which enables the cells to produce a protein known as fetal hemoglobin. Fetal hemoglobin is made by fetuses in the womb to get oxygen from their mothers' blood but usually stops being produced shortly after birth.

The hope was that restoring production of fetal hemoglobin would compensate for the defective hemoglobin produced by sickle cell patients. Beta thalassemia patients don't have enough hemoglobin.

Scientists had hoped that after the treatment, which Gray received July 2, 2019, at least 20% of the hemoglobin in her system would be fetal hemoglobin.

Blood tests so far have shown the levels far exceeded that. About 46% of the hemoglobin in Gray's system continues to be fetal hemoglobin, the researchers reported. In addition, fetal hemoglobin has remained present in 99.7% of her red blood cells, they reported.

Another promising finding is that a biopsy of Gray's bone marrow cells found more than 81% of the cells contained the intended genetic change needed to produce fetal hemoglobin, indicating the edited cells were continuing to survive and function in her body for a sustained period.

While Gray and the beta thalassemia patients experienced some health complications following their procedures, none appears to have been due to the gene-edited cells and all recovered, according to the researchers.

Perhaps most importantly, the changes appear to have translated into significant health benefits for Gray. She hasn't had any severe pain attacks since the treatment and hasn't required any emergency room treatments, hospitalizations or blood transfusions.

In each of the previous two years, Gray had required an average of seven hospitalizations and emergency room visits due to severe pain episodes as well as requiring regular blood transfusions. She has also been able to reduce significantly her need for powerful narcotics to alleviate her pain.

Having her strength back has allowed her to parent through the several tumultuous months of lockdowns and more recently weeks of anti-racism protests. This includes trying to help her children understand everything happening in the world around them, especially the reports of police violence.

"That's been one of the hardest things for me. It's heartbreaking for me," she said.

But thanks to her treatment, she said she's hopeful for things she thought she'd never get to see as a parent.

"Now I'll be there to help my daughters pick out their wedding dresses. And we'll be able to take family vacations," she says. "And they'll have their mom every step of the way."

And Gray said she hopes her story will give other people hope, too.

"We need this right now more than ever, you know? It's a blessing," she said. "It gave me hope when I was losing it. So I feel joy, you know, knowing that there is hope."