Accessibility links
Camps Challenge Cities In COVID Times With Competing Health Risks : Shots - Health News Cities continue to dismantle homeless encampments despite recommendations from the Centers for Disease Control and Prevention to hold off during the pandemic to limit the spread of the coronavirus. 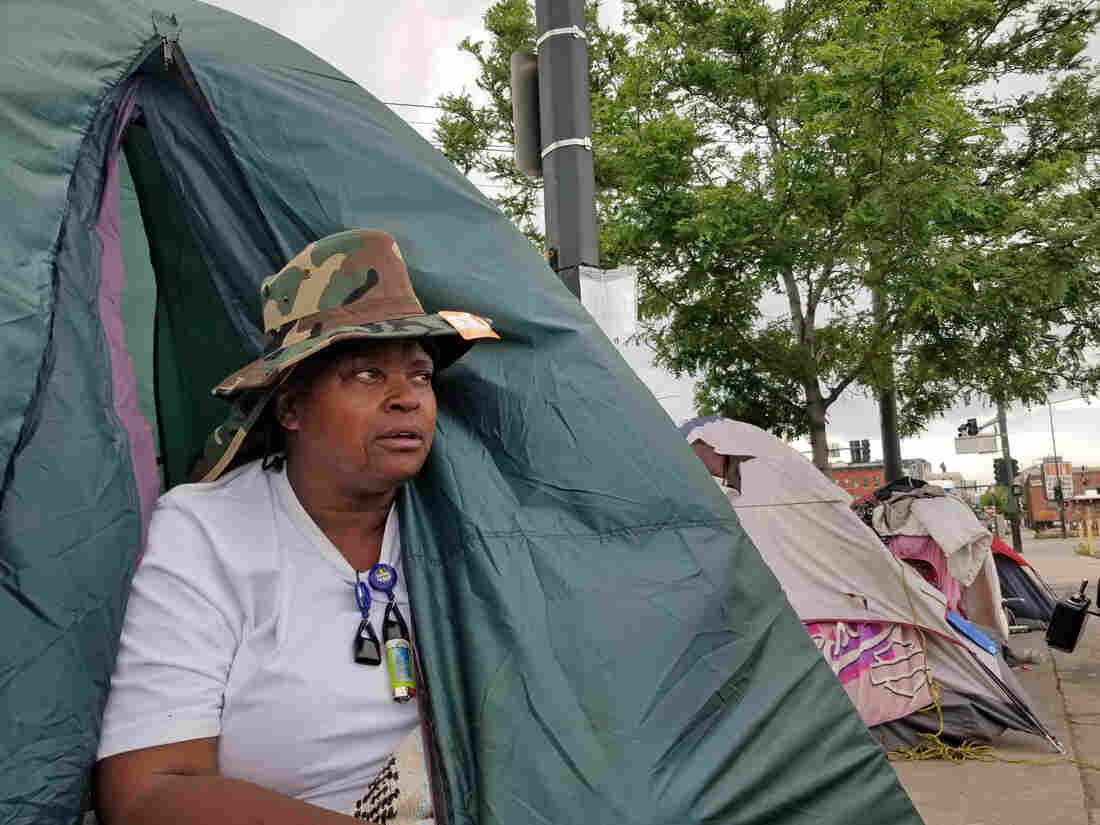 Melody Lewis moved to Denver's streets about six years ago. Last month, Lewis and hundreds of others who are homeless were displaced from sprawling, blocks-long encampments. She moved her tent, but refused to enter a shelter, partly because of the increased threat there of contracting COVID-19. Jakob Rodgers/Kaiser Health News hide caption 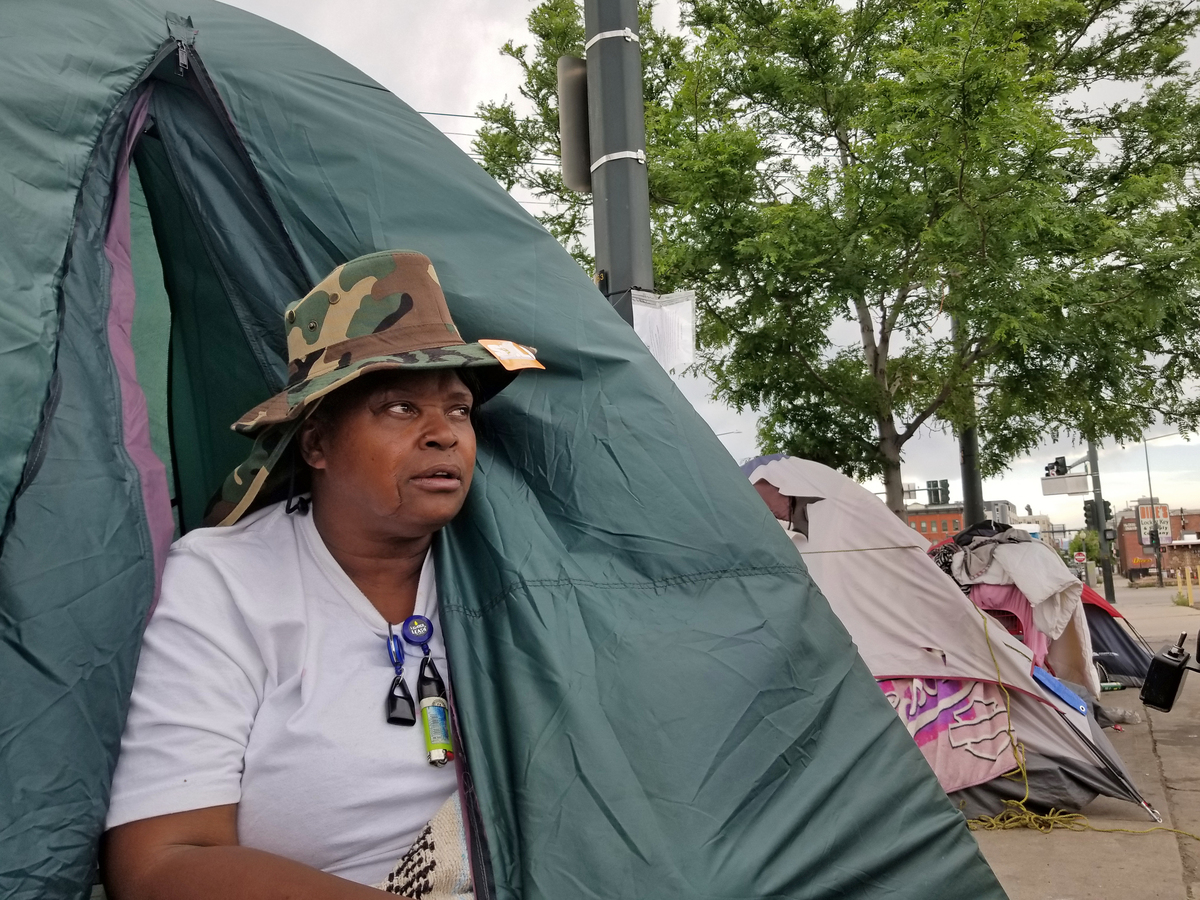 Melody Lewis moved to Denver's streets about six years ago. Last month, Lewis and hundreds of others who are homeless were displaced from sprawling, blocks-long encampments. She moved her tent, but refused to enter a shelter, partly because of the increased threat there of contracting COVID-19.

Melody Lewis lives like a nomad in the heart of downtown Denver.

Poking her head out of her green tent on a recent June day, the 57-year-old points to the place a few blocks away where city crews picked up her tent from a sidewalk median earlier this spring and replaced it with landscaping rocks, fencing and signs warning trespassers to keep out.

Lewis then moved just a quarter-mile away, to a new cracked sidewalk, with new neighbors and potentially, homeless advocates fear, new sources of exposure to the coronavirus.

Several cities across the U.S. are bucking recommendations from the Centers for Disease Control and Prevention by continuing to do regular sweeps of homeless encampments, risking further spread of the virus at a time when health officials are seeking to gain an upper hand on the still-expanding pandemic.

Such struggles involving COVID-19 highlight the nation's ongoing problem with housing. And they showcase the challenge public health officials face: Controlling the spread of the coronavirus also risks increasing the spread of other infectious diseases, such as hepatitis A, that thrive amid the trash-and-feces-strewn sidewalks that can be found in some encampments.

In Denver, Lewis and hundreds of others were displaced in late April and early May from sprawling, blocks-long encampments, as part of what city officials say is an ongoing effort to periodically clean city streets and keep infectious diseases down. Most homeless campers moved their belongings just a few blocks, where their tents now line more than a quarter-mile of sidewalks. 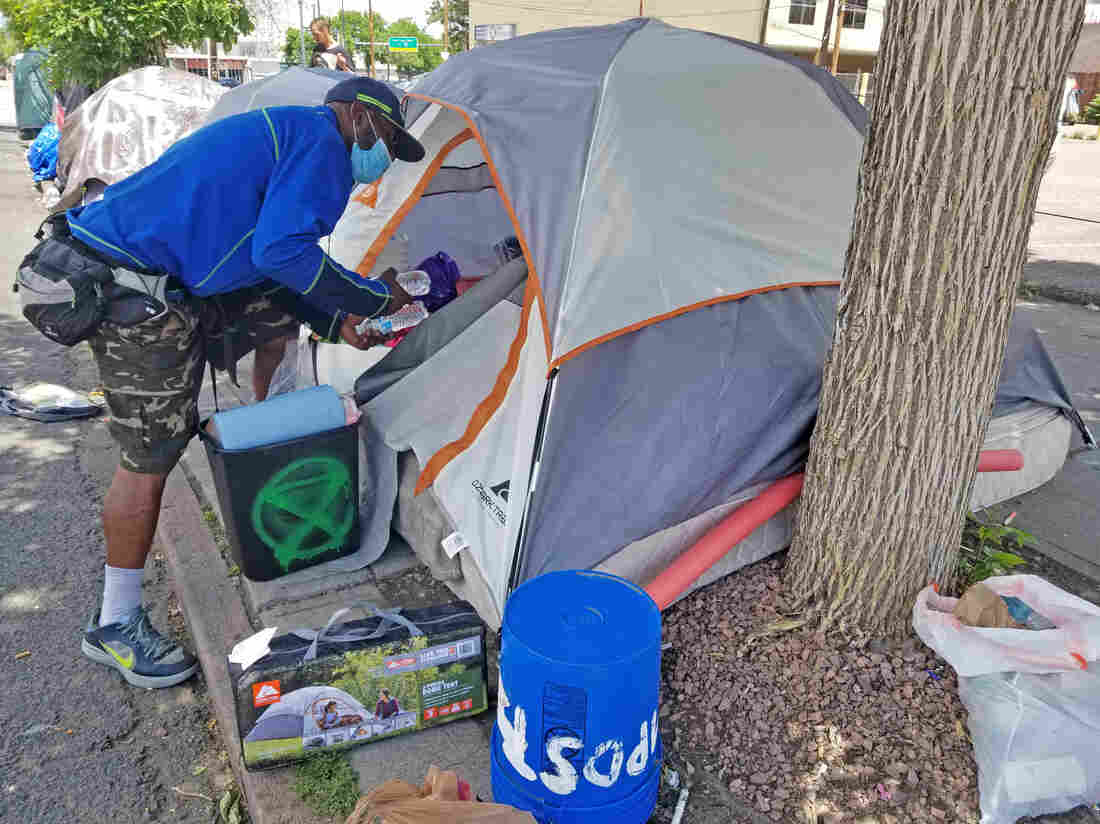 David Scott loads supplies into his tent home in downtown Denver. "As long as they keep it to where we're getting cleaned, not swept, it's all right," says Scott. Jakob Rodgers/Kaiser Health News hide caption 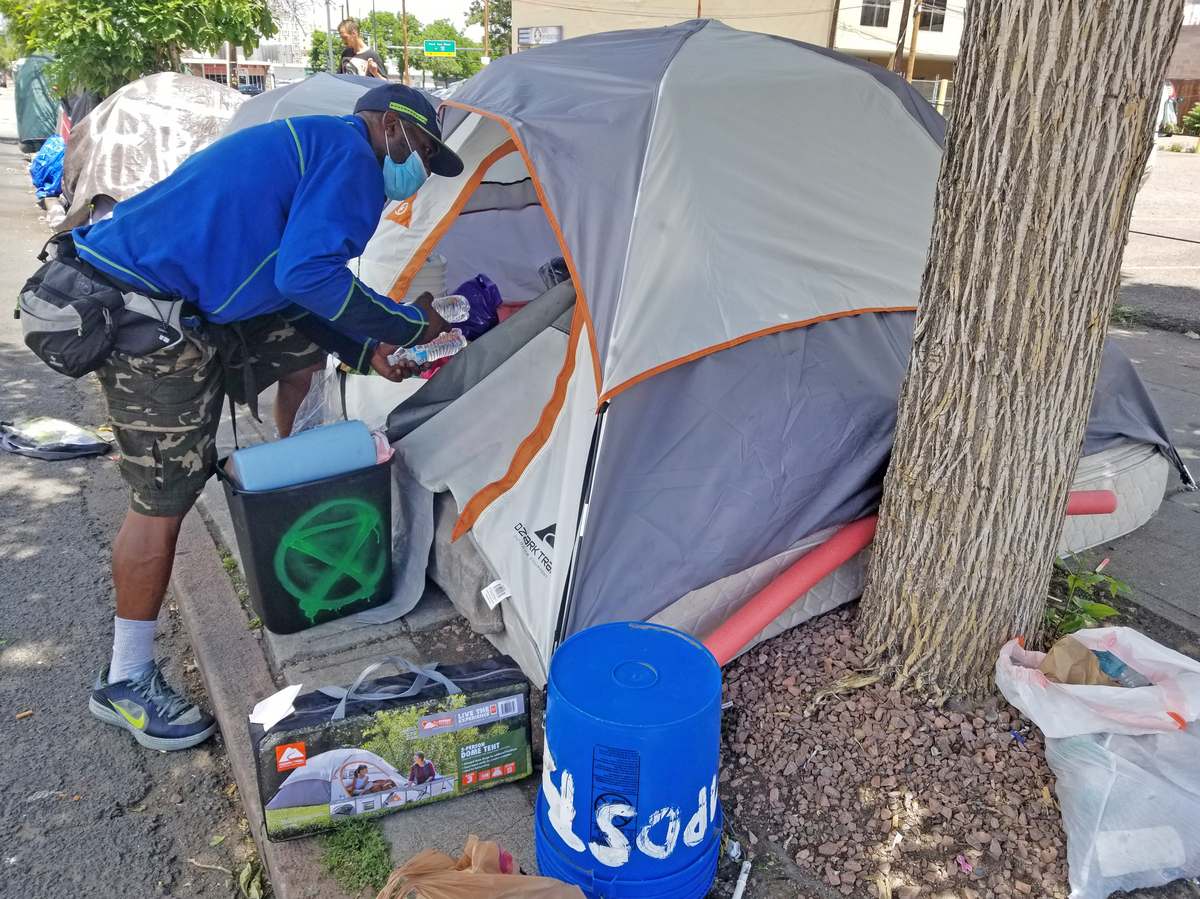 David Scott loads supplies into his tent home in downtown Denver. "As long as they keep it to where we're getting cleaned, not swept, it's all right," says Scott.

An hour south, in Colorado Springs, the police department says it is continuing to follow CDC guidance to prevent COVID-19 spread among the city's homeless population, but also that it has continued enforcing camping bans at certain times on public property, ticketing homeless people who are camping if they refuse to relocate. Those in the camps say a bulldozer cleared at least one site.

And in St. Louis, the city's health department ordered the removal of camps near City Hall, prompting an outcry from homeless advocates.

In all, at least a dozen cities in recent months have continued such camp removals — which goes against CDC guidelines amid the pandemic, according to the National Law Center on Homelessness and Poverty.

As some U.S. communities continue to reopen, and as downtown businesses welcome back employees and customers, some homeless advocates fear such sweeps will only worsen.

"There's no strategy," Jacob Wessley, director of outreach and engagement for the Colorado Coalition for the Homeless says. "That is our concern: When they do sweep this area, where are [those without homes] going to go?"

In Denver, one such cleanup in early May netted 9,500 pounds of trash and more than 50 hypodermic needles, according to Nancy Kuhn, spokesperson for the city's department of transportation and infrastructure.

"Denver has a responsibility to address unsafe, unhealthy, and unsanitary conditions impacting our community," Kuhn says.

Some cities say the pace of such sweeps has dropped dramatically during the pandemic.

Seattle officials conducted four such sweeps from mid-March to early June — each because of "extreme circumstances," says Kevin Mundt, a spokesperson for Seattle's human services department. That compares with 303 such camp removals in the final three months of 2019.

Honolulu created a dedicated area for people to camp and "quarantine" for about two weeks before moving into shelters, in case they had COVID-19. But some homeless campers who did not move had their camps dismantled, which led them to disperse through the community. 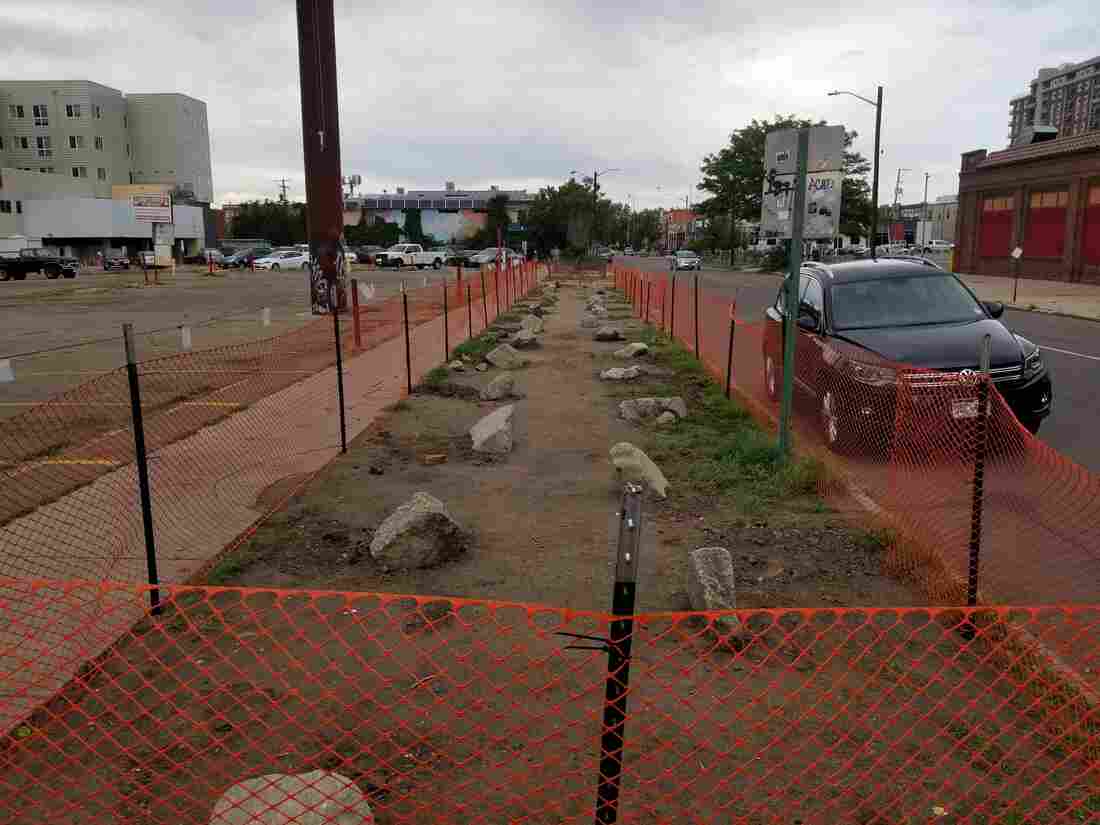 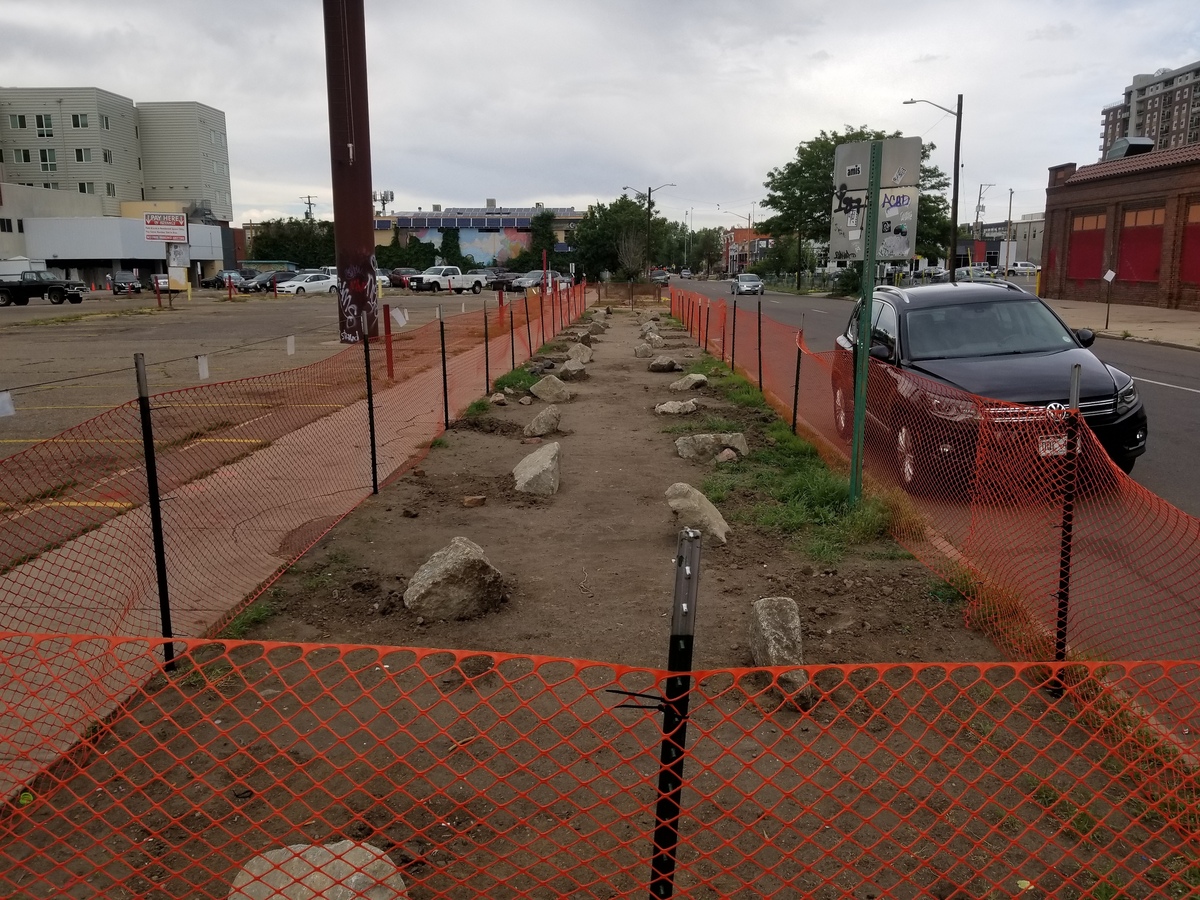 Plastic fencing and landscaping boulders replaced homeless campsites on this block in downtown Denver. Advocates for the homeless fear that displacing encampments risks spreading the coronavirus throughout the homeless community.

The goal is to limit the spread of the virus, while encouraging campers to move indoors, says Marc Alexander, executive director of the city's Office of Housing.

Even so, many homeless advocates say the CDC's guidance is clear, and such efforts don't pass muster. If individual housing units aren't available, the CDC says, homeless campers should be allowed to remain in place during the pandemic. Tents should be at least 12 feet apart, and camps of more than 10 people should be provided hand-washing stations and hand sanitizer.

"Clearing encampments can cause people to disperse throughout the community and break connections with service providers," the CDC guidance warns. "This increases the potential for infectious disease spread."

Already the coronavirus has infected some people who lack permanent housing. In Colorado, for example, at least 483 homeless people have tested positive for COVID-19, state officials reported June 14. Nearly 80% lived in Denver.

Infection rates in the camps, however, are unclear. None of the 50 homeless campers in downtown Denver who agreed to testing in early June were positive for the coronavirus, according to the Colorado Coalition for the Homeless. But a different survey a month earlier indicated nearly a quarter of the 52 people tested at a nearby homeless service center were infected with the virus, despite showing no symptoms.

In downtown Denver encampments, dozens of tents stand packed together, often less than a foot apart along sidewalks. Hardly anyone wears masks, and many in the tent community say the virus is low on their list of concerns.

Several hand-washing stations accompany portable toilets in the area, each provided by a local advocacy group. But the stations don't always have water.

For some homeless campers, the situation is preferable to staying in a shelter.

Avoiding those cramped confines and the accompanying risk of illness makes "common sense," says Erin Lorraine, who is 19 and has been homeless off and on for seven years. One sweep led her to move closer to the South Platte River on the west side of downtown.

"These are our homes," Lorraine says. "We're not hurting nobody."

Not all homeless campers see Denver's cleanups as so nefarious. Many say they were told by Denver officials that they could return after city crews sprayed down the sidewalk.

"As long as they keep it to where we're getting cleaned, not swept, it's all right," says David Scott, 53.

But some of those displaced by previous sweeps say that trust has been broken.

Melody Lewis was away from her tent during a recent cleanup and returned to find that city crews had confiscated many of her belongings, including at least one tent, a bike and some shoes. She refused to go to a shelter, partly because of the threat of illness. As Lewis relates her story, an old sign hanging from a lamppost a few feet away is a reminder of a previous camp cleanup.

"We try to ignore it," Lewis says of such warnings. "Our stuff and our minds are never secure."

To limit the spread of the coronavirus, some nonprofits and some cities — including St. Louis and some others conducting sweeps — have gotten creative, opening isolation shelters for people who are experiencing COVID symptoms and helping some particularly at-risk people move into paid motel rooms.

Recent sweeps also have renewed a conversation in Denver about whether to create sanctioned encampment sites — areas where people can pitch tents and live in socially distanced communities with a city's blessing.

Already, San Francisco has temporarily created a few such encampments, with a total capacity of roughly 200 people.

"Some people have been out on the streets for years," Luehrs says. "And that's where they feel best about living, because maybe we haven't given them better options as a community."

Colleen Echohawk, co-chair of Seattle's Continuum of Care, a coalition of agencies and nonprofits working to address homelessness, says she empathizes with city officials who are having to juggle competing public health threats. Seattle is among the latest areas to face an outbreak of hepatitis A in its homeless community.

But Echohawk questions whether more could be done to limit the impact of sweeps.

KHN is a nonprofit, editorially independent program of the Kaiser Family Foundation. KHN is not affiliated with Kaiser Permanente.