Accessibility links
Coronavirus's Genetics Not Changing Much, And That Bodes Well For A Vaccine : Shots - Health News A coronavirus vaccine could become ineffective if the virus were to undergo certain genetic changes. But so far, so good: Scientists see no evidence that's happening. 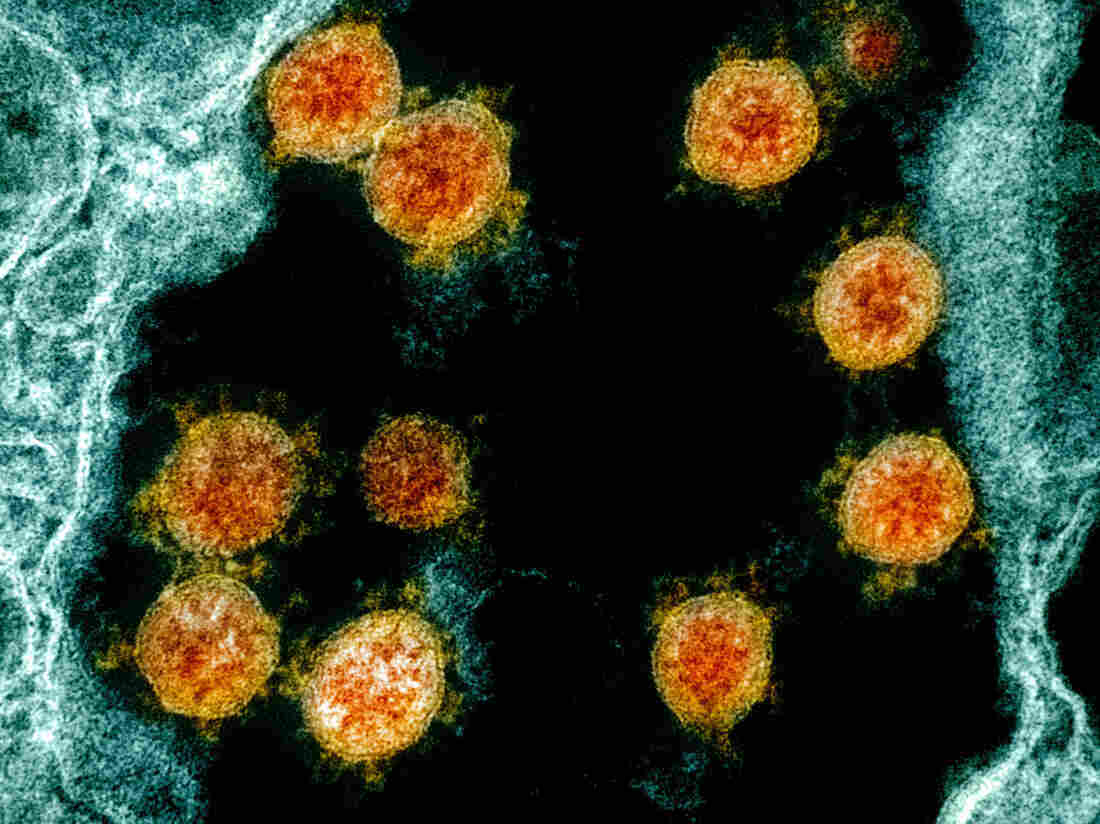 Internationally, scientists now have on file the genomes of more than 47,000 different samples of the virus that causes COVID-19 — up from just one in January. Here's a transmission electron micrograph of SARS-CoV-2 virus particles (orange) isolated from a patient. National Institute of Allergy and Infectious Diseases/National Institutes of Health hide caption 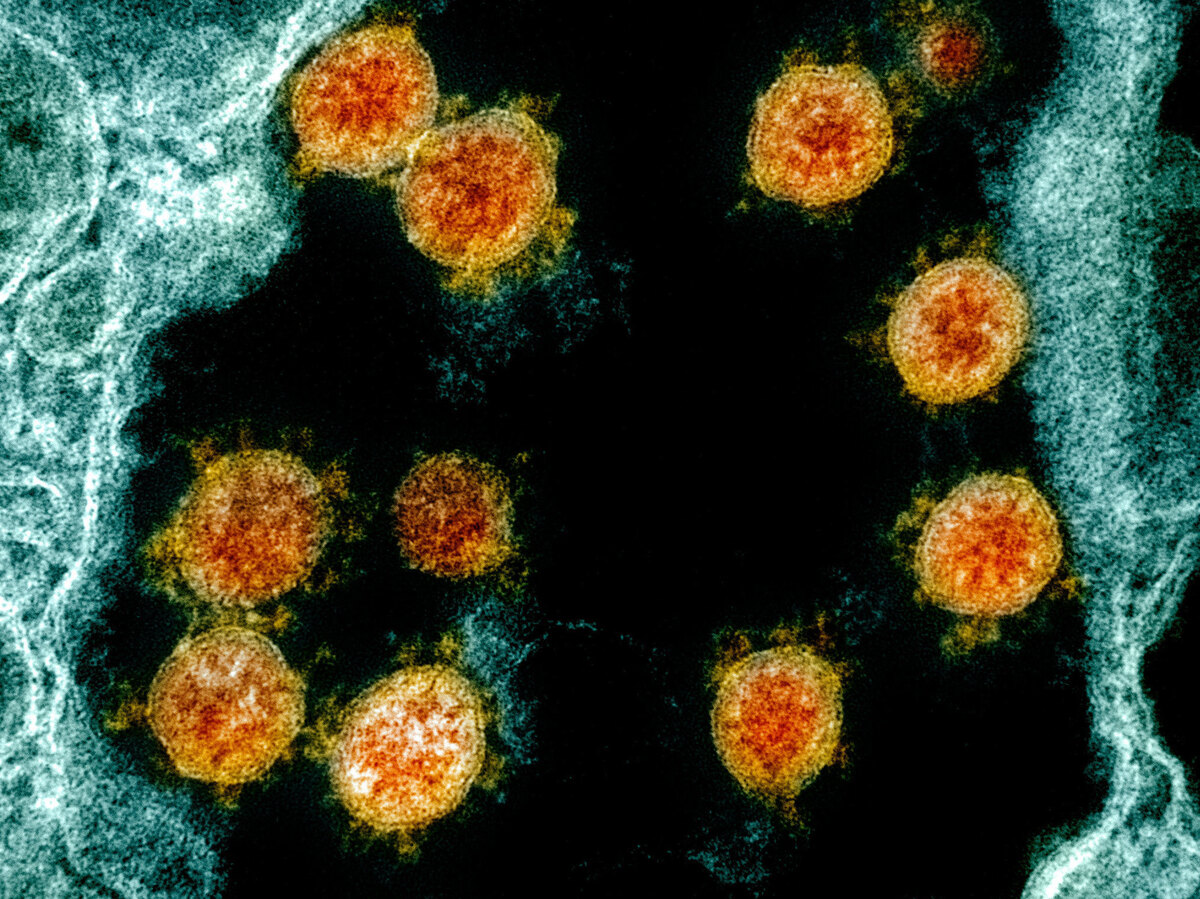 Internationally, scientists now have on file the genomes of more than 47,000 different samples of the virus that causes COVID-19 — up from just one in January. Here's a transmission electron micrograph of SARS-CoV-2 virus particles (orange) isolated from a patient.

Scientists are monitoring the virus that causes COVID-19 for genetic changes that could make a vaccine ineffective. But so far, they're not seeing any.

"There's nothing alarming about the way the coronavirus is mutating or the speed at which it's mutating," says Emma Hodcroft, a molecular epidemiologist at the University of Basel in Switzerland. "We don't think this will be a problem [for vaccines] in the short term."

"To date, there have been very few mutations observed," says Peter Thielen, a senior scientist at Johns Hopkins Applied Physics Laboratory. "And any mutations that we do see are likely not having an effect on the function of the virus itself."

That's good news for scientists working to produce an effective vaccine by the end of the year. And it reflects the enormous quantity of genetic information on SARS-CoV-2, the virus that causes COVID-19, that researchers have amassed since the virus appeared in China late last year.

Questions About How Crash Program Is Picking Coronavirus Vaccines To Back

In January, scientists were limited to just one whole genome sequence of the virus. "Today we have over 47,000 coronavirus genomes that have been submitted to international databases," Thielen says.

New genomes are added every day by teams of scientists from around the world. And each time a new one arrives, it gets a close examination, Thielen says.

"What we're looking for in the data is similarity between the virus that first emerged and the genome that had been deposited and any changes that have occurred in the virus," he says. And overall, the viruses circulating today look remarkably similar to the ones first identified in China.

There had been concern about mutations because SARS-CoV-2 is a type of virus capable of quickly changing its genes. But unlike many similar viruses, the coronavirus uses a proofreading system to catch any errors in the genetic code when it begins generating copies of itself.

"The targets for vaccine design today remain the same as we would have designed them in January."

"So if there's a change, it will actually make a correction at a specific location," Thielen says.

Vaccine developers have been especially concerned about genetic locations that affect something called a spike protein. It's a structure on the surface of the coronavirus that allows it to invade cells.

Spike proteins also give the virus its distinctive appearance and account for its name. Scientists who first viewed a coronavirus through an electron microscope were reminded of the solar corona.

The candidates for a coronavirus vaccine now under development are all designed to teach the immune system to recognize these spike proteins. So far, Thielen says, that's looking like a good strategy.

"The targets for vaccine design today remain the same as we would have designed them in January," he says.

Some other well-known viruses have proved less amenable to the strategy of using the same vaccine from year to year. Influenza, for example, is constantly altering its surface proteins in ways that require annual vaccine updates for each strain that's making the rounds that year.

"Flu just really loves to change these parts," Hodcroft says. "And that's why we can end up with such different flus from season to season."

Measles represents a virus at the other extreme – its genome has stayed fairly consistent over the years, at least in the ways that trigger immunity in people after infection. That means children today still get a measles vaccine that was developed in the 1960s, and it provides immunity for a lifetime.

Hodcroft says she thinks SARS-CoV-2 is likely to fall somewhere between the flu and measles when it comes to making a vaccine.

"I think in the short term we'll find something," she says. "The big question is whether this is something we'll be able to vaccinate once and then you never have to get it again, or will it be something you'll have to get every couple of years to keep your immunity up to date."

Scientists are uncertain because the coronavirus is still so new, Hodcroft says.

"We haven't really seen the full diversity of how the virus can mutate," she says. "It gathers mutations over time. We can't speed up time, so we just have to wait and see."

At the moment, though, vaccine developers have more pressing concerns than mutations. First, they'll have to demonstrate that they can produce vaccines that are both safe and effective. Then they'll have to make huge quantities.

"It's not a small feat to manufacture a vaccine for billions of people and then to get it to all of those people," Hodcroft says.

That will take months, she says, in addition to the months required to develop a vaccine in the first place.