Accessibility links
U.S. Can Stop Surge, Says Fauci: 'It Does Not Have To Be 100,000 Cases A Day' : Shots - Health News The current surge in cases can be contained, says White House advisor Anthony Fauci. But it's going to take a real focus on social distancing — and mask wearing. 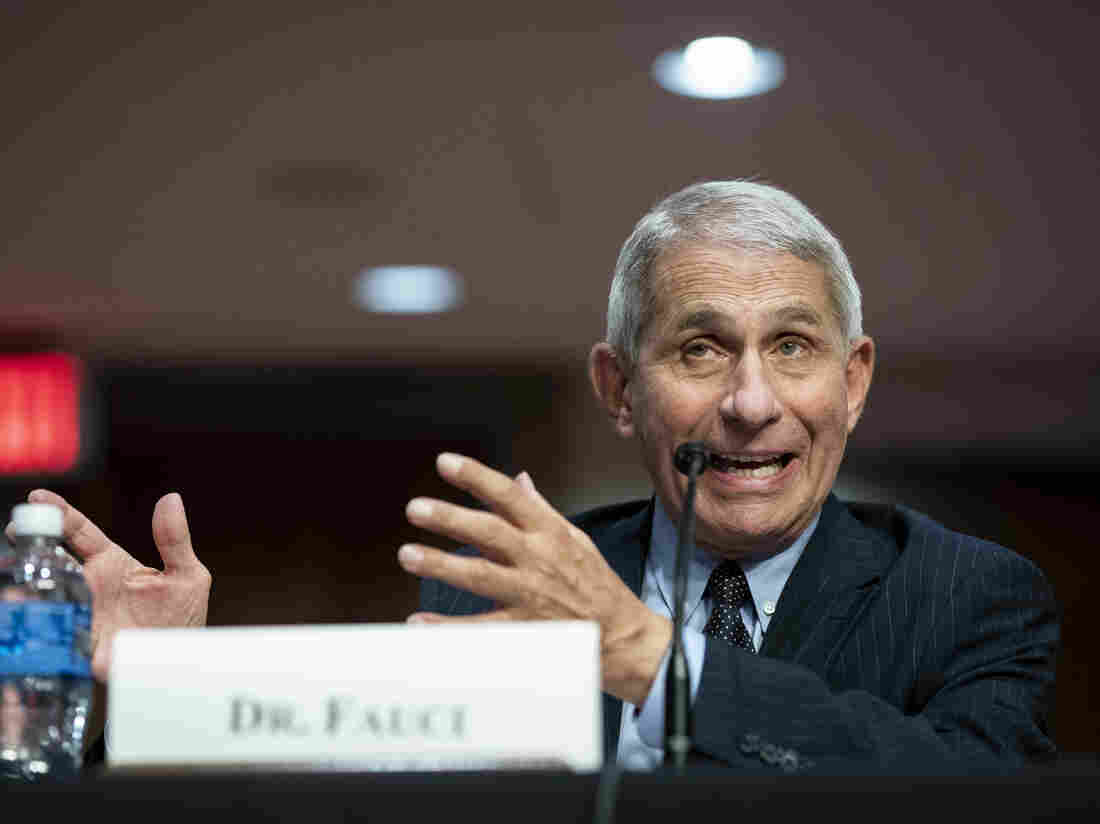 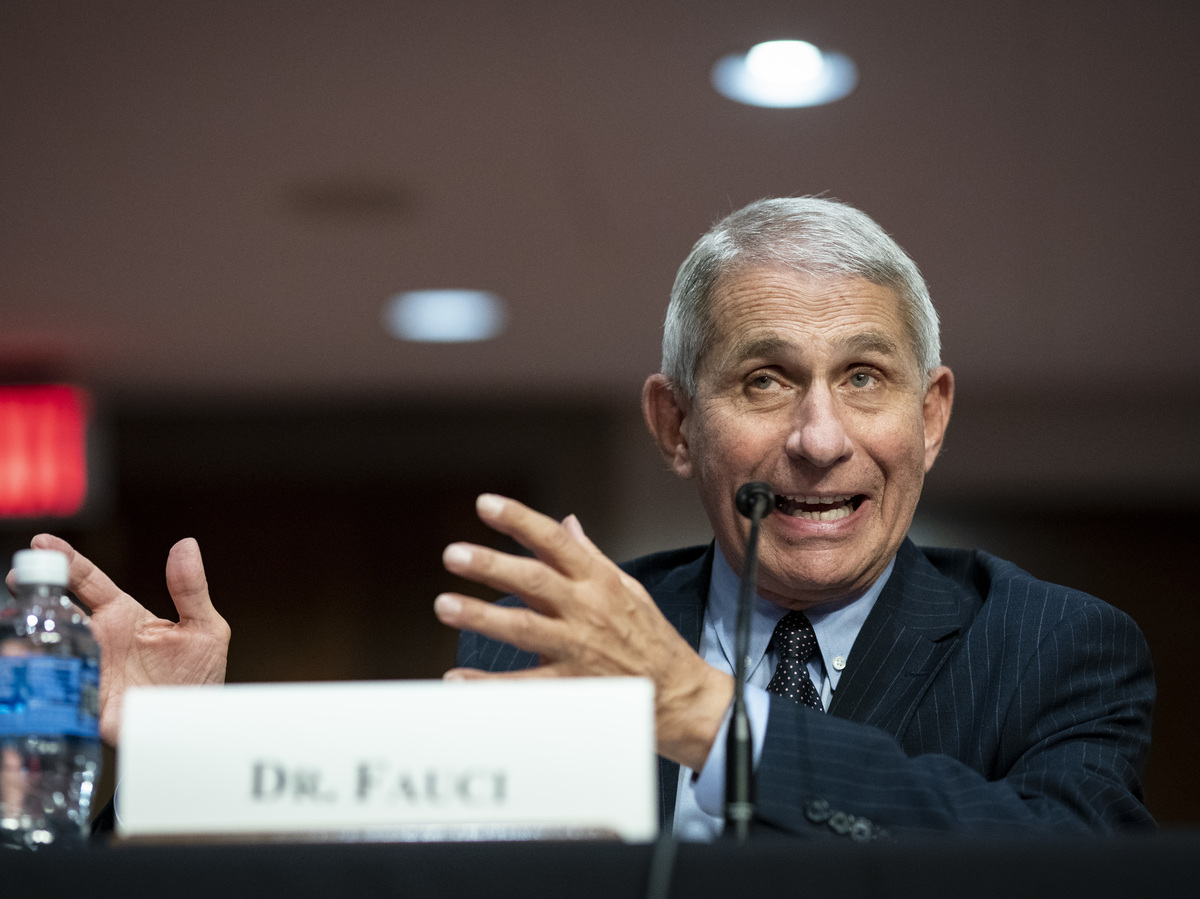 Dr. Anthony Fauci, director of the National Institute of Allergy and Infectious Diseases, speaks during a Senate Health, Education, Labor and Pensions Committee hearing on Tuesday.

While conceding missteps in the federal response to the coronavirus, Dr. Anthony Fauci said Wednesday it is not too late to avoid the dire picture he outlined in congressional testimony of 100,000 coronavirus cases a day.

The nation's leading infectious disease experts said the conflicting advice offered by federal leaders around face masks in the early days of the pandemic helped sow distrust and continues to hamper the government's ability to slow the outbreak.

"We have to admit it, that that mixed message in the beginning, even though it was well meant to allow masks to be available for health workers, that was detrimental in getting the message across," Fauci said in an interview with Mary Louise Kelly of NPR's All Things Considered. "No doubt about it."

Despite the overwhelming consensus among public-health experts that face masks can help prevent the spread of the coronavirus, face coverings have become a partisan issue, something critics of the federal response have blamed on what they say has been a confusing back-and-forth on the issue from the Trump administration.

As late as February 29, Surgeon General Jerome Adams was telling Americans on Twitter to stop buying masks, saying they are "NOT effective." But the guidance soon changed, and by early April the Centers for Disease Control and Prevention began recommending that Americans wear face coverings in public. Even then, however, President Trump said he would not be wearing a mask himself.

"I think that that did have an effect," said Fauci, the director of the National Institute of Allergy and Infectious Diseases, of the conflicting guidance. "The message early on became confusing," he said.

But, he added, once it became clear people can spread the virus without knowing they're sick, public health leaders realized the message needed to change.

"We have people who may not even know they're infected and are inadvertently infecting others," said Fauci.

Fauci said he has been encouraged by a growing chorus among Republican leaders in recent days encouraging Americans to wear masks. That list has grown to include not only Vice President Mike Pence, but top Republicans in the Senate, including Majority Leader Mitch McConnell, Tim Scott of South Carolina, Lamar Alexander of Tennessee and Marco Rubio of Florida.

That's been matched by a rising number of states that now require that masks be worn in public. Eighteen states and the District of Columbia now mandate masks in public — a list that was joined by Pennsylvania on Wednesday.

The tightening of coronavirus-related restrictions in many states comes amid a rapidly escalating surge in new cases that has eclipsed some of the worst days of the pandemic during the spring. More than 44,000 cases were reported Tuesday, according to data from Johns Hopkins University, one of the highest daily totals yet.

And the worst may still be to come. In testimony before the Senate on Tuesday, Fauci warned that the virus could soon reach 100,000 cases per day.

In his testimony, Fauci said one reason cases continue to climb is because the nation may not have shut down as aggressively as it needed to early in the crisis. He noted that in Europe, as much as 95% of the population was effectively shut down, while in the U.S., the figure was closer to 50%.

"If you look at the Europeans, they got the curve way down," he told NPR. "Once the curve is way down ... it is much easier, when you do get blips of infection as you try to open up, to contain those infections. And if you look at our curve, it peaked, it came down a little and then it stayed about flat until just recently when it resurged up again. It makes it much more difficult because ... you're sort of chasing after things as opposed to getting your thumb on them. So we're in a bad position because of what happened early on."

Fauci said he believes the country can avoid another lockdown, "but we have to do things a bit differently than what we've been doing."

He said activities like "congregating in bars, congregating in crowds, people getting together in a celebratory way ... without wearing masks" contributed to recent case surges. This behavior, he said, while understandable because people "felt cooped up," represented "a violation of the principles of what we're trying to do, and that is the social distancing, the wearing of masks."