Accessibility links
Consent And Communication: Lessons From Sex Ed For Social Distancing Etiquette : Shots - Health News Sex educators and sexologists have some advice for safe coronavirus socializing. Just like in the bedroom, overcommunicate about your needs and seek consent. 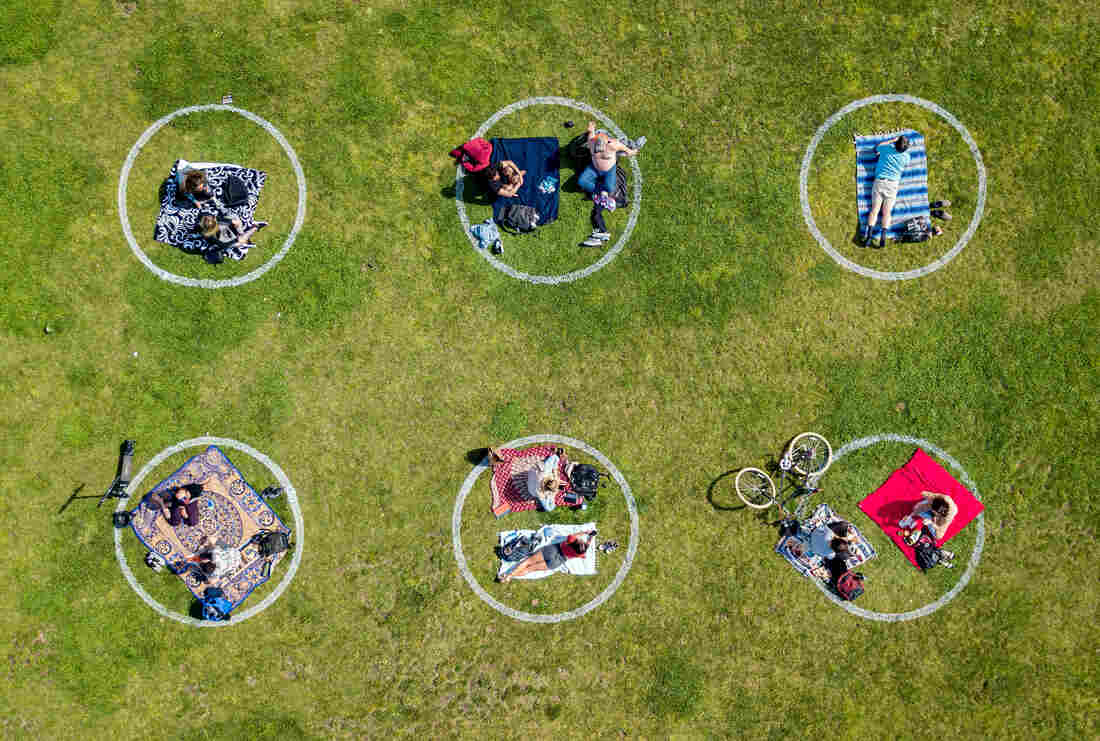 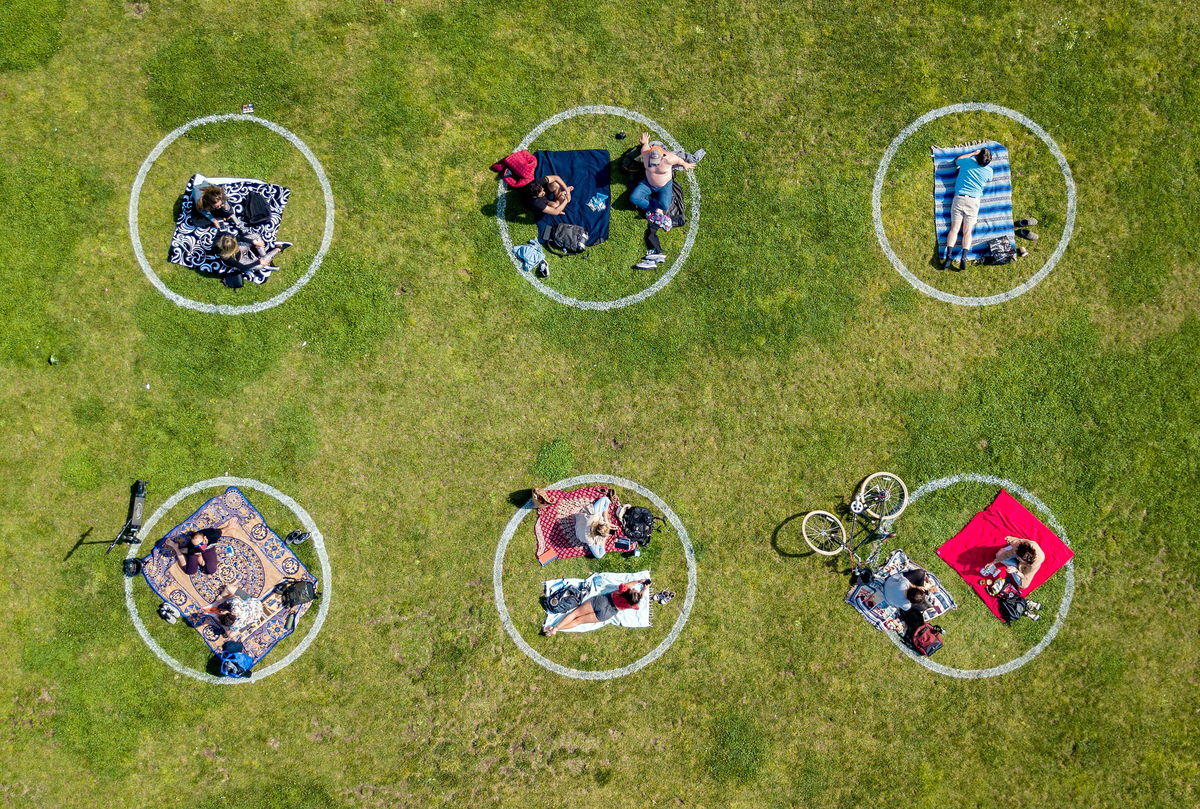 Communication skills used to negotiate safe sex are also useful for setting boundaries while socializing during the COVID-19 pandemic. Above, circles drawn in the grass encourage social distancing at Dolores Park in San Francisco.

Ina Park has been in a monogamous marriage for more than 15 years, but she feels like she has been having one safe sex conversation after another these days.

There was the time she and some close friends spent a few hours together without wearing masks, and she later realized she needed to ask: "Are you seeing other people?"

Or the time when she got a text from the mother of her son's friend. The mom suggested letting the boys play basketball together at her home, which led to detailed negotiations about risk tolerance, boundaries and types of protection.

Park is a doctor who treats people with sexually transmitted infections at the San Francisco City Clinic and is author of a book about STIs, Strange Bedfellows. She's used to explaining to people that when you have sex with someone, you're essentially having sex with whoever else they're having sex with.

These days, it's whoever you're breathing next to.

As families across the U.S. have started to emerge from strict shelter-in-place rules, they're having to figure out whether (and how) to get a haircut, host a family barbecue or share child care with another family. Americans are learning they have a lot to discuss and negotiate with each other about what they're willing to do, with whom and how carefully.

Bars Are Reopening In Some Places And Closing In Others. If You Go, Know The Risks

"If you really want to make sure your partner uses a condom, you have to express why it's important to you and why it's aligned with your values and why that's something that you need from them," says Julia Feldman, who runs the sex education consultancy Giving the Talk. 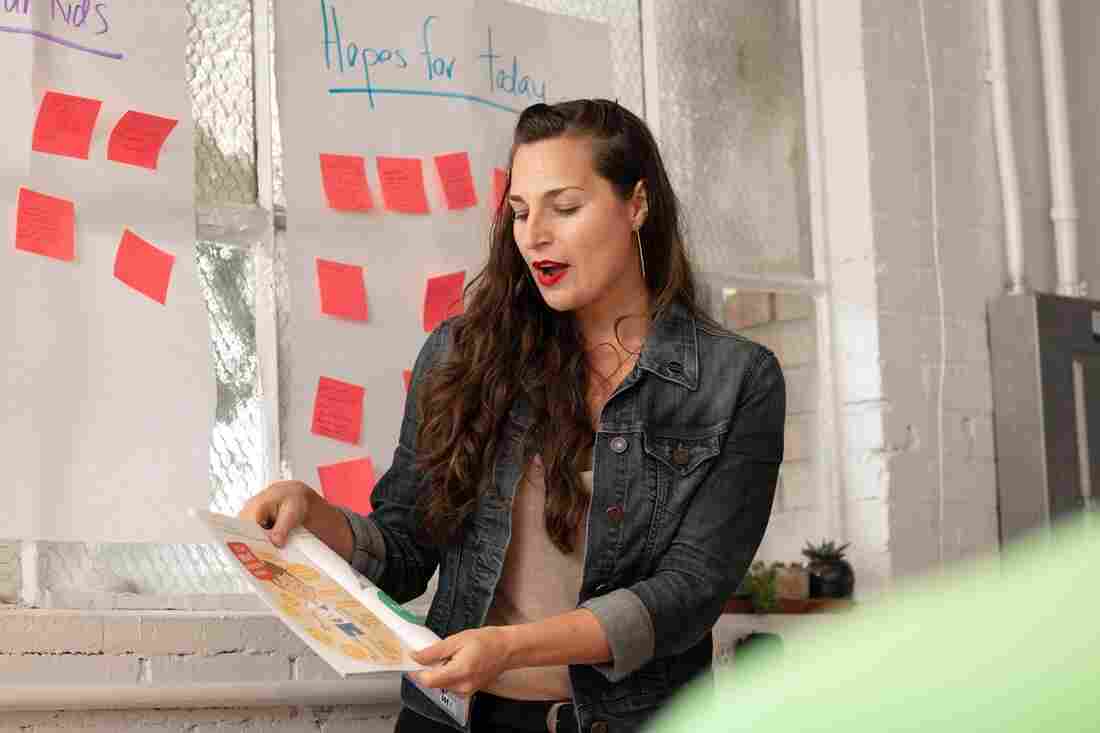 Sex educator Julia Feldman says the same communication skills she teaches to teens about sex are helpful for everyone during the pandemic. Molly DeCoudreaux Photography hide caption

Similarly, she says, "If you want your mom to wear a mask when you see her, you need to explain why it's important to you and why it's aligned with your values."

Feldman helped the Oakland Unified School District develop its latest sex education curriculum, one of the most comprehensive in the nation. She says Bay Area schools have expanded beyond knowledge-based teaching — sperm fertilizing the egg, etc. — to now include a focus on developing communication skills around intimacy and sex. These are skills that many adults have never received formal training on but that studies show lead to greater relationship satisfaction.

"The more people communicate what they want and what they desire and what they're comfortable with, the more we actually get what we want," Feldman says. "This is a really good time to practice that."

Feldman has been practicing her skills over and over during the pandemic, like the time she invited a friend over for a socially distanced cocktail in her backyard. They had an extensive conversation about how they would sit (6 feet apart), what they would drink (the friend would accept a beverage can she could wipe down herself), whether they would wear masks (no) and if Feldman would serve snacks (no).

"Because if you show up at someone's house and they have a beautiful spread and they're expecting that you're just going to dig into a platter of food with them, and that's not what you're comfortable with, there might be disappointment on their part," Feldman explains. "There's a lot of emotions involved."

Her friend also asked in advance if she could use Feldman's bathroom while she was there.

"So I disinfected this one bathroom and created a pathway through my house. But it really was only because she was cognizant of articulating that need and I was able to take time to accommodate it," she says. "If she had showed up and said, 'Oh, I really have to pee. Can I use your bathroom?' I don't know what I would have done."

Lessons from the kink community

"You start tying people up without consent, and it just goes south right away — you just can't do that," says Carol Queen, the staff sexologist at Good Vibrations, a sex toy and sexual health company based in San Francisco.

"That helps people do that very first step of understanding what their own situation and needs and desires are," she says. "Somebody, make this list for us!"

"The idea that it's OK to be that talkative, in the service of safety and comfort, really is what we learned from that," Queen says. "It's a very important lesson in sex and, these days, under most other circumstances."

As some county health officials in California have been encouraging people to form social pods or "quaranteams" as a way to limit socializing to two or three households, many of us now find ourselves having to essentially decide which of our friends or family members we will ask to go steady with us.

"I wish I had more polyamorous friends to help me navigate that situation," says Park, the physician and STI expert. She means people with experience brokering different levels of intimacy with multiple partners and establishing ground rules for the group.

Park says that as a physician, she is familiar with the protocols for delivering bad news, and she often talks with patients about infidelity when an infection appears in a purportedly monogamous relationship. Park wonders how newly formed quarantine pods will deal with social infidelities.

"There's inevitably going to be betrayals — 'Oh, I cheated on our pod with somebody else' — and then having to disclose that to the pod," she says. "Does the relationship recover? Or do you kick that person out of your pod forever?"

In Park's experience, it's always better to admit to an affair before a contagious infection enters the picture, whether it's chlamydia or the coronavirus, so everyone can take precautions. With the coronavirus, the offending pod member can self-quarantine for two weeks away from the rest of the group, so no one else contracts the virus or gets sick.

But whether you're being kicked out of a pod or no one has invited you to be part of a pod in the first place, the experts agree we all need to get better at handling rejection. The pandemic may be temporary, but we're in it with our loved ones for the long term, so everyone needs to respect each other's anxieties and boundaries.

"Don't take it personally," advises Queen. "We're all new here at this party."