Accessibility links
To Stop COVID-19 Transmission, Contact Tracers Follow The Trail Of The Virus : Shots - Health News Recently, the idea of contact tracing has triggered some colorful misinformation campaigns. It's actually a tried-and-true public health tool that can curb the spread of the coronavirus. 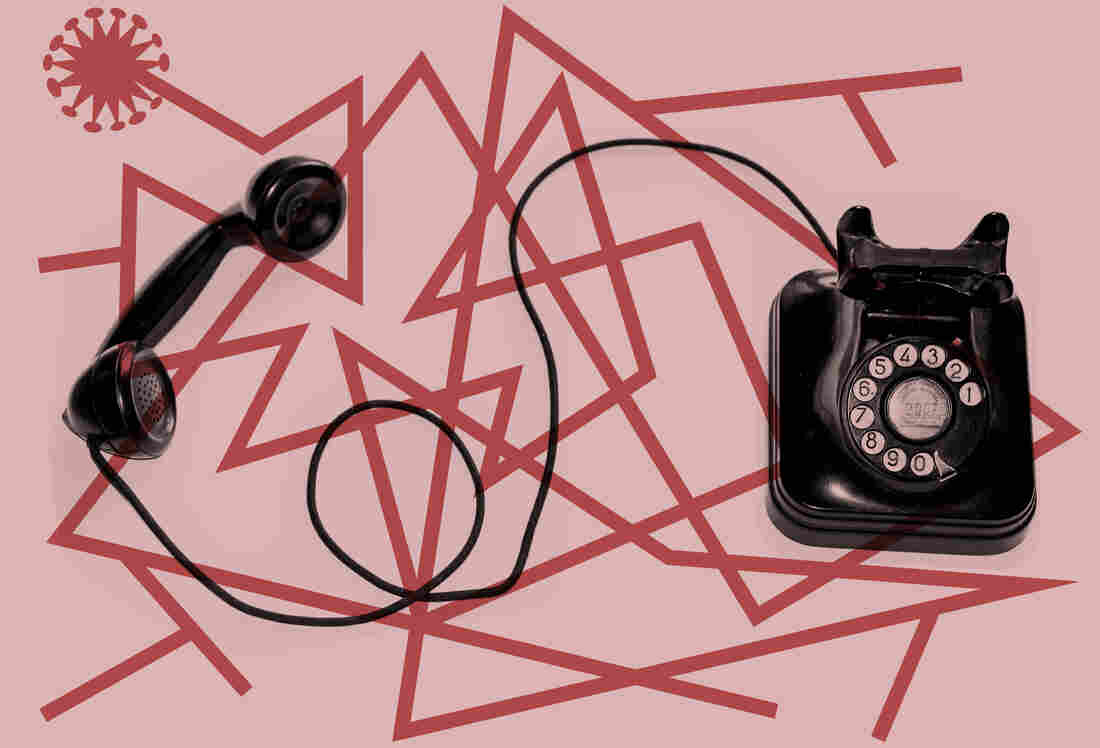 Contact tracing for the coronavirus is the subject of colorful conspiracy theories. In fact, contact tracing is a straightforward process of notifying people if they've been exposed to someone who is sick. Hannah Norman/KHN hide caption 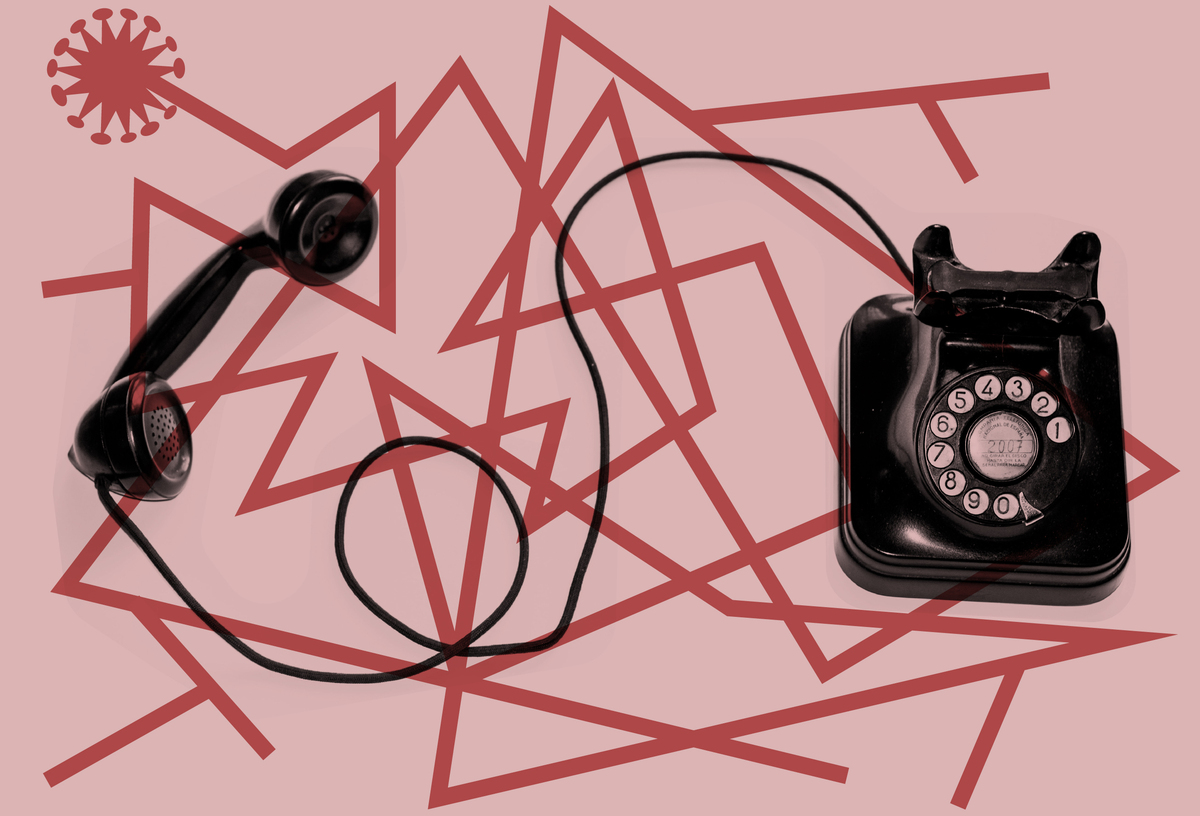 Contact tracing for the coronavirus is the subject of colorful conspiracy theories. In fact, contact tracing is a straightforward process of notifying people if they've been exposed to someone who is sick.

In the midst of the COVID-19 pandemic, contact tracing is downright buzzy, and not always in a good way.

Contact tracing is the public health practice of informing people when they've been exposed to a contagious disease. As it has become more widely employed across the U.S., it has also become mired in modern political polarization and conspiracy theories.

Misinformation abounds, from tales that people who talk to contact tracers will be sent to nonexistent "FEMA camps" — a rumor so prevalent that health officials in Washington state had to put out a statement in May debunking it — to elaborate theories that the efforts are somehow part of a plot by global elites, such as the Clinton Foundation, Bill Gates or George Soros.

At the very least, such misinformation could hinder efforts to contain the coronavirus, and at worst it has sparked threats against tracers, say some observers, including the Institute for Strategic Dialogue, a London-based organization that studies polarization.

The dynamic, ISD notes in a June report, "is being generated both by individual social media users and by key influencers in conspiratorial communities" and plays on fears that Big Brother is watching us.

Anatomy Of A COVID-19 Conspiracy Theory

According to that report, social media posts, mainly videos, have been associated with "widespread sharing of petitions and other efforts to galvanise political action against contact tracing." The videos, steeped in disinformation and conspiracy think — whether alleging that tracers have ties to the deep state or casting them as part of a Democratic effort to interfere in the 2020 election — "are receiving more than 300,000 views each on YouTube and are being shared tens of thousands of times across public Facebook pages and groups."

Of course, the real story behind tracing is nothing like these colorful conspiracy theories. Contact tracing is an age-old infection-control strategy, and it's a bit tedious, actually.

"We've been doing it in public health for decades," said Marcus Plescia, chief medical officer for the Association of State and Territorial Health Officials.

Part old-fashioned shoe-leather detective work, part social work, the goal is to interrupt the spread of the illness by reaching out to people who test positive — and the people they have been in close contact with — and provide needed support for them to isolate. It has to be done quickly, and it takes a lot of people. Recent case count surges in some parts of the country are making the task more difficult.

So let's take a look at what it is and isn't.

When a person tests positive for certain communicable diseases, health care providers must report the person's contact information to public health departments. Contact tracers then try to reach out quickly, generally by phone.

The tracer will ask for the patient's address. Some social media sites have decried this as nefarious, but it's not. The tracer does not want to provide private medical information — "Mr. Smith, I see you tested positive for COVID-19" — to the wrong person. Answering contact tracers' questions is always optional, and those contacted should also feel free to confirm it really is the public health department calling, experts note, as there have been reports of fraudulent calls.

During the initial call, the tracer makes sure the patient is OK and understands the disease and what to expect. Ideally, the contact tracer builds a relationship with the patient. Some can link the patient with local resources or services, such as food delivery or needed medical supplies, that can make it easier to stay isolated until the patient has recovered from the virus.

Contact tracers ask where the infected person traveled and with whom they came in close contact — generally defined as being within 6 feet for 15 minutes or more — from about two days before they started showing symptoms until they isolated themselves.

That does not include such things as simply passing people on the street or opening the door to pick up a package dropped off by a FedEx driver.

Providing the information is voluntary, but it is the only way the programs will work. Most patients happily comply, but a few are reluctant, said Plescia.

"That was a little surprising," he said. "You would think if you might cause another person to become ill, you would have an interest in that person being notified. But some worry they are snitching on other people."

Tracers do not disclose the name of the infected person to the contacts. Contacts simply "receive a call saying, 'You have had a significant exposure,' " said Crystal Watson, a senior scholar at the Johns Hopkins Center for Health Security and the co-author of a report on contact tracing.

To assist with tracing, some restaurants, stores, salons and other businesses are keeping daily logs of customers. Some voices on social media have raised concerns about those logs, saying they are intrusive and suggest that Big Brother is watching. Their purpose, though, is to make it easier for health officials to notify other employees and patrons in the event that someone tests positive.

Close contacts are urged to quarantine for 14 days, check their temperature regularly and avoid contact with other household members, if possible.

For each infected patient, tracers need to contact an average of 10 other people, said Watson — noting, however, that the number could be far higher. "If contact tracing is done in a place where there's a big epidemic and no one is under social distancing restrictions, you'll have to contact more," she said.

Speed is of the essence in finding close contacts. Infected people start showing symptoms within two to seven days of exposure — although it can take up to 14 — and they may be contagious before symptoms appear.

Who is asking these questions?

In the early days of the COVID-19 pandemic in the U.S., tracing was limited because testing for the virus was also limited. The two really go together. That meant the nation used the other tool at its disposal, the blunt instrument of stay-at-home orders. Now, with testing more available and with many states in the fits and starts of reopening, the more targeted effort of contact tracing becomes important.

Used effectively, it can sharply slow outbreaks, as seen in countries that have employed comprehensive tracing programs, such Japan, New Zealand and China.

So far, though, the U.S. has had a more limited effort, and it varies state by state.

An estimated 37,000 contact tracers are now employed by public health departments nationwide, triple the number just a few weeks ago, according to an NPR state survey and tracking effort. Still, those numbers are far below estimates of what many say is necessary. Indeed, Watson and other Hopkins researchers say the U.S. needs to add a minimum of 100,000 contact tracers.

Can they force me into quarantine?

Although health officials do have authority to isolate people who pose a danger to others, that power is almost never used.

"Mandatory quarantine hasn't really been used since the days of smallpox in this country, although the president used it in the beginning of the pandemic for some people repatriating back to the county," said Watson.

Public health officials avoid such aggressive tactics because they don't want to discourage people from getting tested. As for hauling people away from their homes by force, that also doesn't happen here, although it does in some authoritarian countries. Instead, a number of cities and regions have set up special hotels or other facilities where infected or exposed people who live in homes where they can't isolate themselves from other family members can voluntarily spend their convalescence.

It has certainly worked in other countries, said Howard Koh, professor at the Harvard T.H. Chan School of Public Health and former assistant secretary for health in the Obama administration.

"Italy, Spain, China, Taiwan, Hong Kong and New Zealand have all gotten to the other side of the curve," said Koh. "When they have outbreaks, they are relatively small, and they jump on them right away."

One difference, he said, is those places have a national strategy.

"In our country, we have a 50-state strategy, a patchwork response including contact tracing, with some states having embraced it and some have barely started."

But there are many areas of the country, especially the Sun Belt, where cases are spiking, complicating efforts to control the virus. With more demand for testing, the turnaround time for results grows. And large numbers of new cases mean contact tracers have far more people to track down, making it challenging to do so in the short time frame needed to be effective.

"I'm discouraged that a lot of the states where we are seeing a big surge right now have not put a lot of effort into developing their contact tracing workforce," Watson said, echoing Koh's call for a national plan. "We need an initiative by the federal government focused on contact tracing."