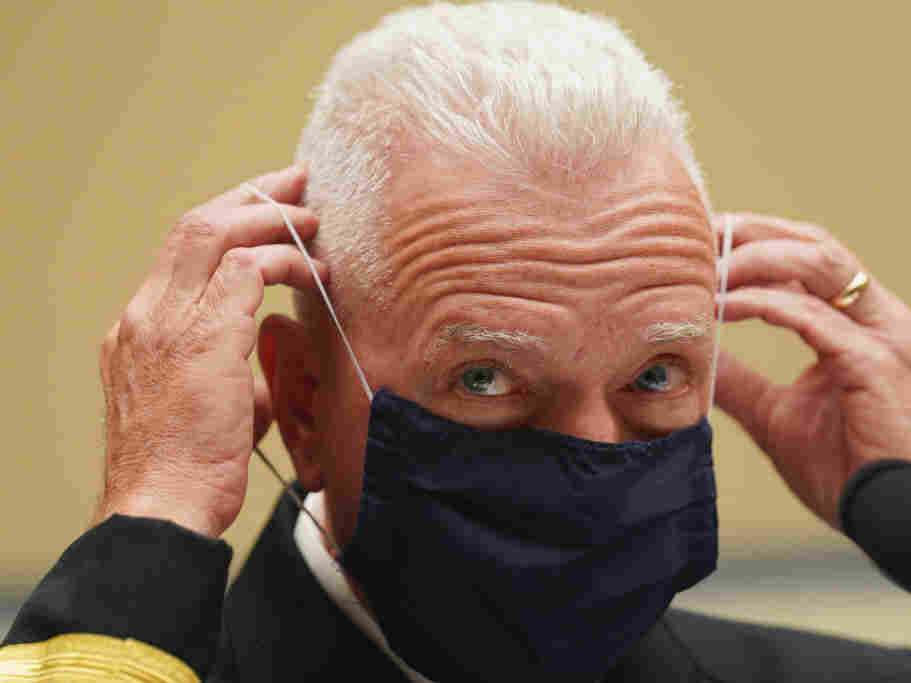 Adm. Brett Giroir, assistant secretary for health in the Department of Health and Human Services, adjusts his face mask while testifying this month before a House subcommittee on the coronavirus crisis. Kevin Lamarque/Pool/Getty Images hide caption 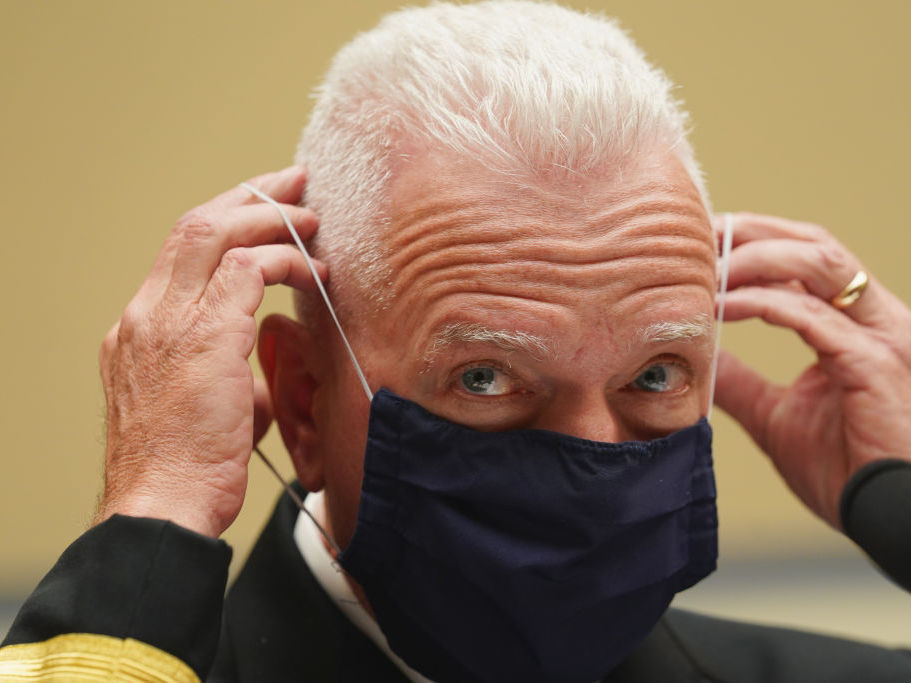 Adm. Brett Giroir, assistant secretary for health in the Department of Health and Human Services, adjusts his face mask while testifying this month before a House subcommittee on the coronavirus crisis.

Public health experts generally agree that, in spite of improvements, the U.S. still falls short on the testing needed to combat the COVID-19 pandemic.

The official who oversees the country's testing efforts, however, maintains the U.S. is doing well on testing now and will soon be able to expand testing greatly using newer, point-of-care tests that deliver quick results.

In an interview with NPR's Morning Edition, Adm. Brett Giroir pointed out the U.S. is currently conducting more than 700,000 tests a day. He argued that some parts of the country are already conducting enough tests to contain outbreaks.

A recent analysis for NPR by Harvard researchers found that more than 1 million tests were needed to mitigate, or keep outbreaks from getting worse. Giroir said the U.S. is well on its way to this target.

"We're going to be over a million tests very soon. That's not even a question," Giroir said.

That same analysis also found some 4.3 million people would have to be tested daily to suppress the U.S. outbreak and begin to let life get back to normal. The latest numbers from Harvard found 16 states and territories have reached the mitigation benchmark, and of those four are doing enough testing to suppress the virus.

Giroir pushed back on the notion that the U.S. was behind on reaching those criteria.

"Yes, we want to have more testing, more testing will be better. But right now, we're in a good place to tell us the information we need," he said.

Nonetheless, he said, efforts are underway to increase testing: "We're going to expand testing probably two or threefold within the next couple of months."

Giroir said the administration is surging testing in areas once again hit hard by COVID-19 outbreaks – including Phoenix, Baton Rouge, La., and Jacksonville, Fla. – but that in many cases testing is adequate if other mitigation efforts are in place.

He emphasized the need for public health measures in addition to testing, including social distancing and the wearing of masks. "We need places that are in hot zones to close bars and to limit restaurants. And if we do those simple things, we can turn around the virus," he said.

Giroir is not the first person involved with the U.S. coronavirus effort to assert testing for the coronavirus is on track. In April, Vice President Pence, who oversees the White House Coronavirus Task Force, said the U.S. had enough tests to begin reopening.

Since then, testing for the coronavirus has become more widespread. But there continue to be shortages in the supplies and machines needed to get results.

Since cases started surging in June, labs have reported delays in getting results due to the increased volume. In Washington, D.C., for example, recipients of coronavirus tests may be asked to wait up to seven business days for results. Quest Diagnostics, one of the largest testing companies, said testing volumes have pushed wait times up to nearly a week.

Even Mick Mulvaney, Trump's former chief of staff, has complained, saying his son waited up to a week for his results.

Giroir acknowledged the growing wait times due to the "unprecedented demand."

"We want to decrease that time on average between three and four days across the country," Giroir told NPR's Steve Inskeep. "But as you pointed out, some people are waiting five, six or seven days, and we do want to get that down."

Delays in testing mean public health workers are not able to notify the contacts of people who test positive, and so people may unwittingly continue to spread the virus.

Giroir was bullish on the potential of newer testing technology to expand the country's ability to test quickly. He said fast point-of-care tests can help solve the problem of overburdened laboratories and could aid in the reopening of schools and businesses in the fall.

"Certainly by September, we expect to have 15 to 20 million point-of-care tests. That's as many tests as we're doing every month now," Giroir said, adding that the administration wants to see 100 million tests per month happening then.

These point-of-care — or antigen tests — do yield a much speedier result, but as NPR has reported, they may miss up to 20% of infections.