Accessibility links
Doctors Will Monitor Kids Who Had Mystery COVID-Linked Syndrome : Shots - Health News After contracting coronavirus, almost 200 kids in the U.S. developed a new inflammatory syndrome. Most recovered, but pediatric researchers have started a study to watch for long-term effects. 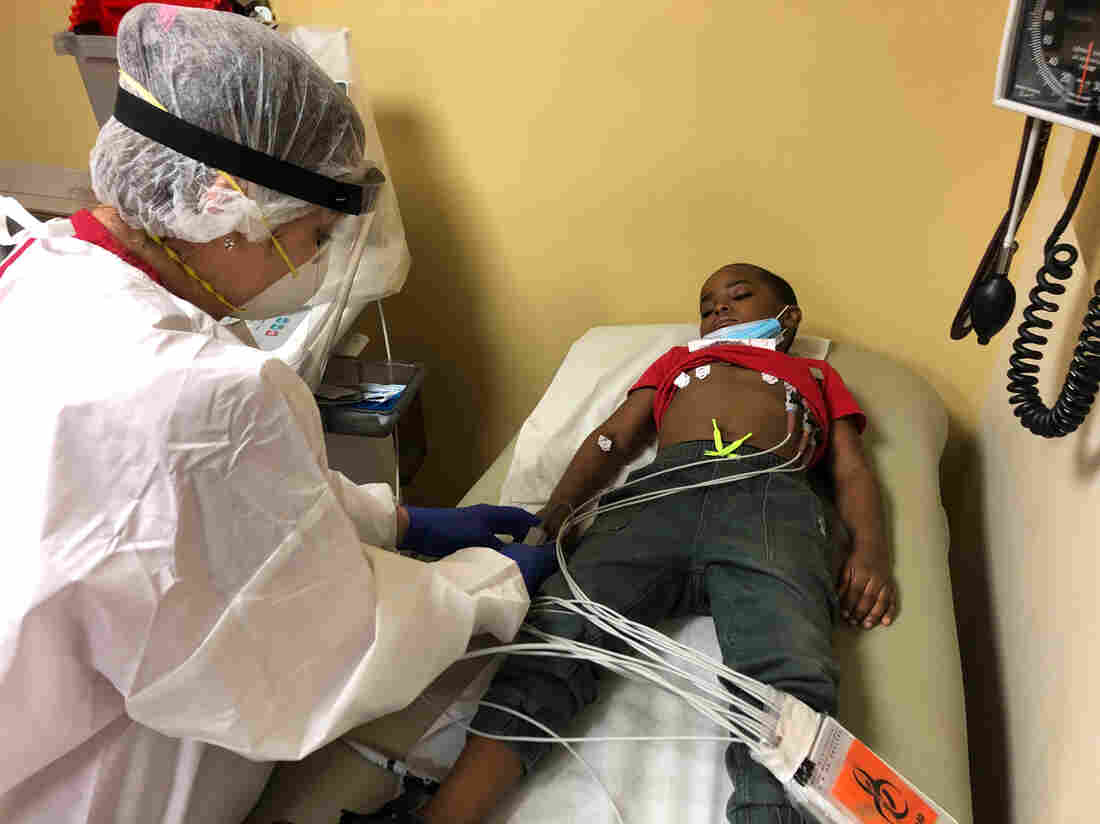 Marcelina Alvarez, a technician at Montefiore Medical Center in the Bronx, administers an EKG to Israel Shippy to check the functioning of his heart. Fred Mogul/ WNYC hide caption 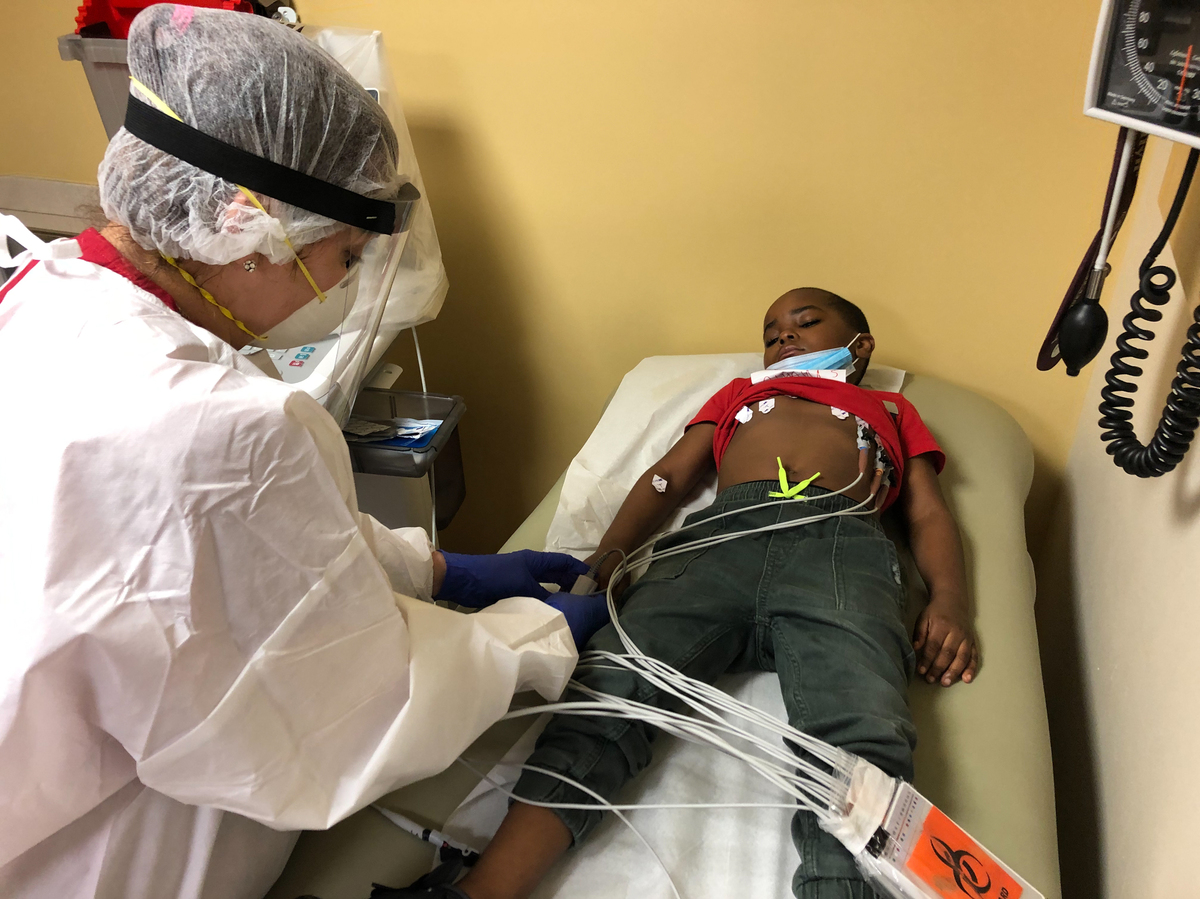 Marcelina Alvarez, a technician at Montefiore Medical Center in the Bronx, administers an EKG to Israel Shippy to check the functioning of his heart.

Israel Shippy doesn't remember much about having COVID-19 – or the unusual auto-immune disease it triggered – other than being groggy and uncomfortable for a bunch of days. He's a five-year-old, and would much rather talk about cartoons, or the ideas for inventions that constantly pop into his head.

"Hold your horses, I think I know what I'm gonna make," he says, holding up a finger in the middle of a conversation. "I'm gonna make something that lights up and attaches to things with glue, so if you don't have a flashlight, you can just use it!"

In New York, 237 kids, including Israel, have been diagnosed so far with Multisystem Inflammatory Syndrome in Children, or MIS-C. New York state officials continue to track the syndrome, but the Centers for Disease Control and Prevention did not respond to repeated requests for information on how many children nationwide have been diagnosed with MIS-C.

Studies published June 29 in the New England Journal of Medicine reported on 186 children in 26 states who were diagnosed with MIS-C by May 20. Four of those children died. A researcher writing in the same issue added in reports from other countries, finding about 1,000 children worldwide have been diagnosed with MIS-C.

Israel is friendly and energetic, but he's also really good at sitting still. During a recent checkup at Children's Hospital at Montefiore, in the Bronx, he has no complaints about all the stickers and wires a technician attached to him for an EKG. And when Dr. Marc Foca, an infectious disease specialist, came by to listen to his heart and lungs, and prod his abdomen, Israel barely seems to notice.

There were still some tests pending, but overall, Foca says, "Israel looks like a totally healthy five-year-old."

"Stay safe!" Israel calls out, as Foca left. It's his new sign-off, instead of good-bye. His mother, Janelle Moholland, explains Israel came up with it himself.

And she's also hoping that after a harrowing couple of weeks in early May, Israel himself will "stay safe."

That's why they've been returning to Montefiore for the periodic check-ups, even though Israel seems to have recovered fully from both COVID-19 and MIS-C. 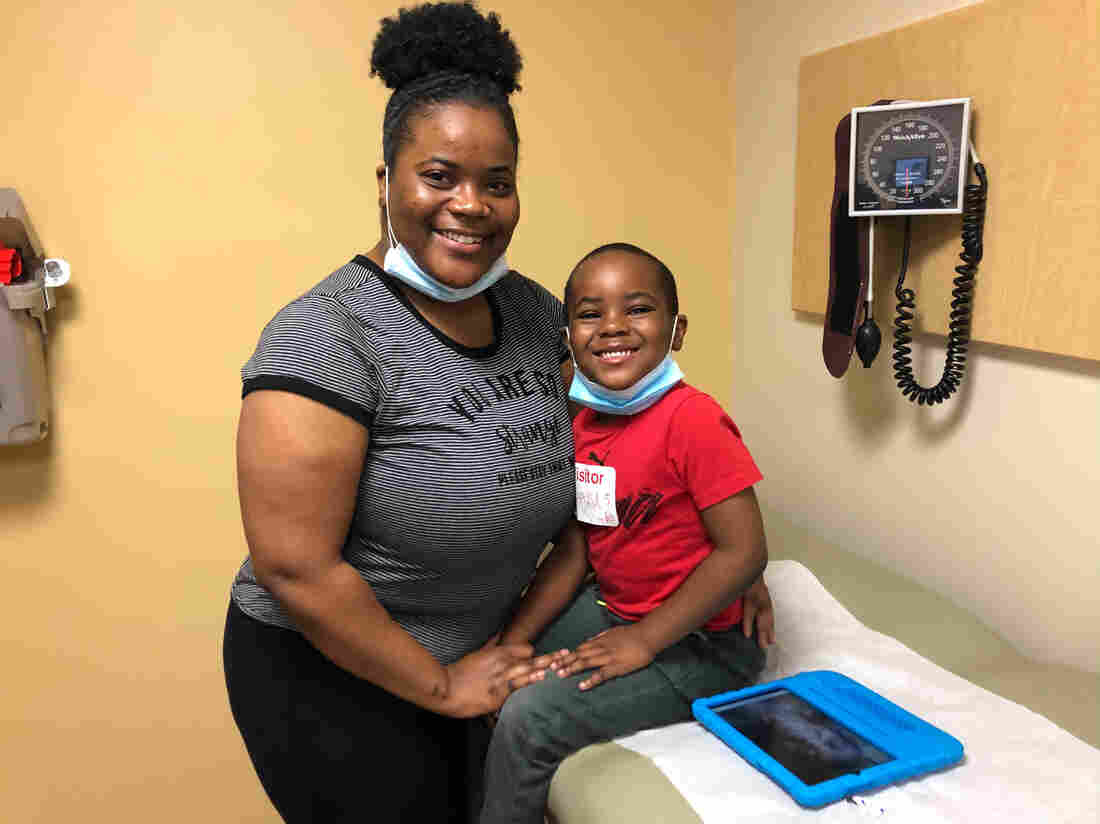 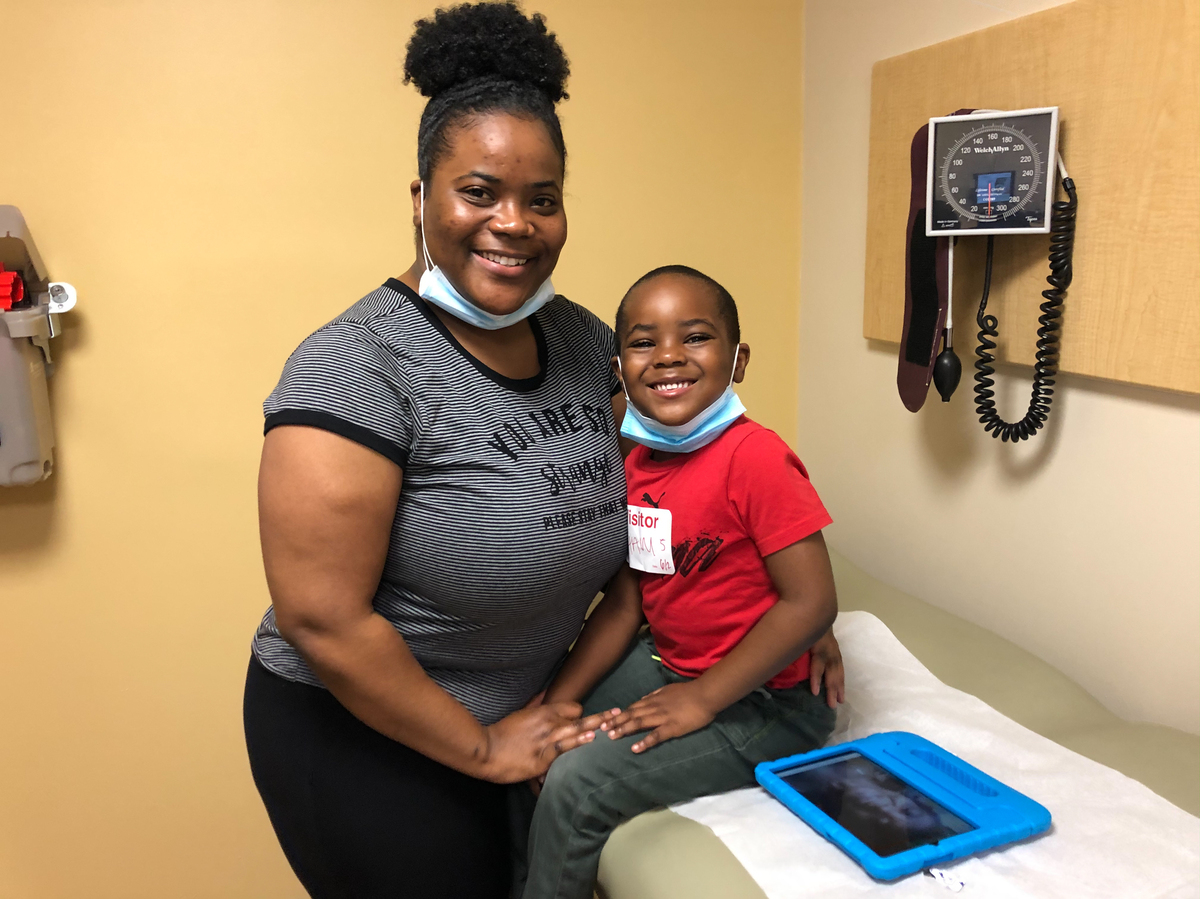 Janelle Moholland and her son Israel Shippy, 5, went back to Children's Hospital at Montefiore for a follow-up appointment five weeks after Shippy was first hospitalized with Multisystem Inflammatory Syndrome (MIS-C) in children.

MIS-C is relatively rare, and it apparently responds well to treatment, but it is new enough — and mysterious enough — that doctors here want to make sure the children who recover don't experience any related health complications in the future.

"We've seen these kids get really sick, and get better and recover and go home, yet we don't know what the long-term outcomes are," says Dr. Nadine Choueiter, a pediatric cardiologist at Montefiore. "So that's why we will be seeing them."

When Israel first got sick at the end of April, his illness didn't exactly look like COVID-19. He had persistent high fevers that reached 104 degrees — but no problems breathing. He wasn't eating. He was barely drinking. He wasn't using the bathroom. He had abdominal pains. His eyes were red.

They went to the emergency room a couple times and visited an urgent care center, but the doctors sent them home without doing a coronavirus test. Moholland, 29, says she felt powerless.

"There was nothing I could do but make him comfortable," she says. "I literally had to just trust in a higher power and just hope that He would come through for us. It taught me a lot about patience and faith."

As Israel grew sicker, and they still had no answers, Moholland grew frustrated. "I wish his pediatrician and [the emergency room and urgent care staff] had done what they were supposed to do and given him a test," when Israel first got sick, Moholland says. "What harm would it have done? He suffered for about 10 or 11 days that could have been avoided."

In a later interview, she talked with NPR about how COVID-19 has disproportionately affected the African-American community, due to a combination of underlying health conditions and lack of access to good health care. She says she felt she, too, was a victim of those disparities.

"It affects me, personally, because I am African-American, but you just never know," she says. "It's hard. We're living in uncertain times — very uncertain times."

Finally, Children's Hospital at Montefiore admitted Israel — and the test she'd been trying to get for days confirmed that he had the virus.

Israel was in shock, and by the time he got to the hospital, doctors were on the lookout for MIS-C, so they recognized his symptoms — which were distinct from most people with COVID-19.

Doctors gave Israel fluids and intravenous immune globulin, a substance obtained from donated human plasma, which is used to treat deficiencies in the immune system.

Immune globulin has been effective in children like Israel, because MIS-C appears to be caused by an immune overreaction to the initial coronavirus infection, according to Dr. Nadine Choueiter, the Montefiore pediatric cardiologist.

"The immune system starts attacking the body itself, including the arteries of the heart," she said.

In some MIS-C cases – though not Israel's – the attack occurs in the coronary arteries, inflaming and dilating them. That also happens in a different syndrome affecting children, Kawasaki disease. About 5% of Kawasaki patients experience aneurysms — which can fatally rupture blood vessels — after the initial condition subsides.

Choueiter and her colleagues want to make sure MIS-C patients don't face similar risks. So far, they're cautiously optimistic.

"We have not seen any new decrease in heart function or any new coronary artery dilations," she says. "When we check their blood, their inflammatory markers are back to normal. For the parents, the child is back to baseline, and it's as if this illness is a nightmare that's long gone."

For a Pennsylvania teen, the MIS-C diagnosis came much later

Not every child who develops MIS-C tests positive for the coronavirus, though most have tested positive for antibodies to the coronavirus, indicating that they had been infected previously. That was the case with Andrew Lis, a boy from Pennsylvania who was the first MIS-C patient seen at the Nemours/Alfred I. duPont Hospital for Children in Wilmington, Del.

Andrew had been a healthy 14-year-old before he got sick. He and his twin brother loved sports and video games. He says the first symptom was a bad headache. He developed a fever the next day, then constipation and intense stomach pain.

"It was terrible," Andrew says. "It was unbearable. I couldn't really move a lot."

His mother, Ingrid Lis, says they thought he might have appendicitis, but they didn't suspect the coronavirus at first. In fact, she hesitated to take Andrew to the hospital, for fear of exposing him to the virus. But after Andrew stopped eating because of his headache and stomach discomfort, "I knew I couldn't keep him home anymore," Lis says.

Andrew was admitted to the hospital on April 12, but that was before reports of the mysterious syndrome had really started trickling out of Europe.

Over about five days in the pediatric ICU, Andrew's condition deteriorated rapidly, as doctors struggled to figure out what was wrong. Puzzled, they tried treatments for scarlet fever, strep throat, and toxic shock syndrome. Andrew's body broke out in rashes, then his heart began failing and he was put on a ventilator. Andrew's father, Ed Lis, says doctors told the family to brace for the worst: "We've got a healthy kid who a few days ago was just having these sort of strange symptoms. And now they're telling us that we could lose him."

Though Andrew's symptoms were atypical for Kawasaki disease, doctors decided to give him the standard treatment for that condition – administering intravenous immune globulin, the same treatment doctors in New York gave Israel Shippy.

"Within the 24 hours of the infusion, he was a different person," his mother recalls. Andrew was removed from the ventilator, and his appetite finally returned. "That's when we knew that we had turned that corner."

It wasn't until after Andrew's discharge that his doctors learned about MIS-C from colleagues in Europe. They recommended the whole family be tested for antibodies to the coronavirus. Although Andrew tested positive, the rest of the family – both parents, Andrew's twin brother, and two older siblings – all tested negative. She's still not sure how Andrew was exposed, since the family had been observing a strict lock-down since mid-March. Both Ingrid and her husband were working remotely from home, and she says they all wore masks and were conscientious about hand washing when they ventured out for groceries. She thinks Andrew must have been exposed at least a month before his illness began.

And she's puzzled why the rest of her close-knit family wasn't infected as well. "We are a Latino family," she says. "We are very used to being together, clustering in the same room." Even when Andrew was sick, she says, all six of them huddled in his bedroom to comfort him.

Meanwhile, Andrew has made a quick recovery. Not long after his discharge in April, he turned 15, and resumed an exercise routine involving running, pushups and sit-ups. A few weeks later, an echocardiogram showed Andrew's heart was "perfect," Ed Lis says. Still, doctors have asked Andrew to follow up with a cardiologist every three months.

MIS-C and Kawasaki disease are similar, but what about the long term?

After Israel's diagnosis, Moholland was filled with questions about MIS-C. But it's so new that there is little information or research. So she began reading about Kawasaki disease. Before Israel's first follow-up appointment at Montefiore, she wrote down several questions she wanted answers to:

"Does it affect his heart? Does it affect the function of his organs? Will the swelling come back?" she says. "He had swelling internally, and that was so scary."

The medical team at Montefiore doesn't have definitive answers for her yet, but that's why they are tracking the 40 children they have already treated and discharged. With kids showing few symptoms in the immediate aftermath, Dr. Chouetier hopes the long-term trajectory after MIS-C will be similar to what happens after Kawasaki disease.

"Usually children who have had coronary artery dilations [from Kawasaki disease] that have resolved within the first six weeks of the illness do well long-term," says Choueiter, who runs the Kawasaki disease program at Montefiore. "These kids have been followed for years and years down the road, and it hasn't seemed to affect their exercise ability or their ability to function in everyday life."

The Montefiore team is asking patients affected by MIS-C to return for a check-up one week after discharge, then after one month, three months, six months and a year. They will be evaluated by pediatric cardiologists, hematologists, rheumatologists, and infectious disease specialists. The hospital has set up a dedicated outpatient clinic, on Tuesdays, just for these visits.

Montefiore and other children's hospitals around the country are sharing information. Choueiter wants to establish an even longer-term monitoring program for MIS-C, comparable to registries that exist for other diseases.

Moholland is glad the hospital is being vigilant.

"The uncertainty of not knowing whether it could come back in his future is a little unsettling," she says. "But I am hopeful."