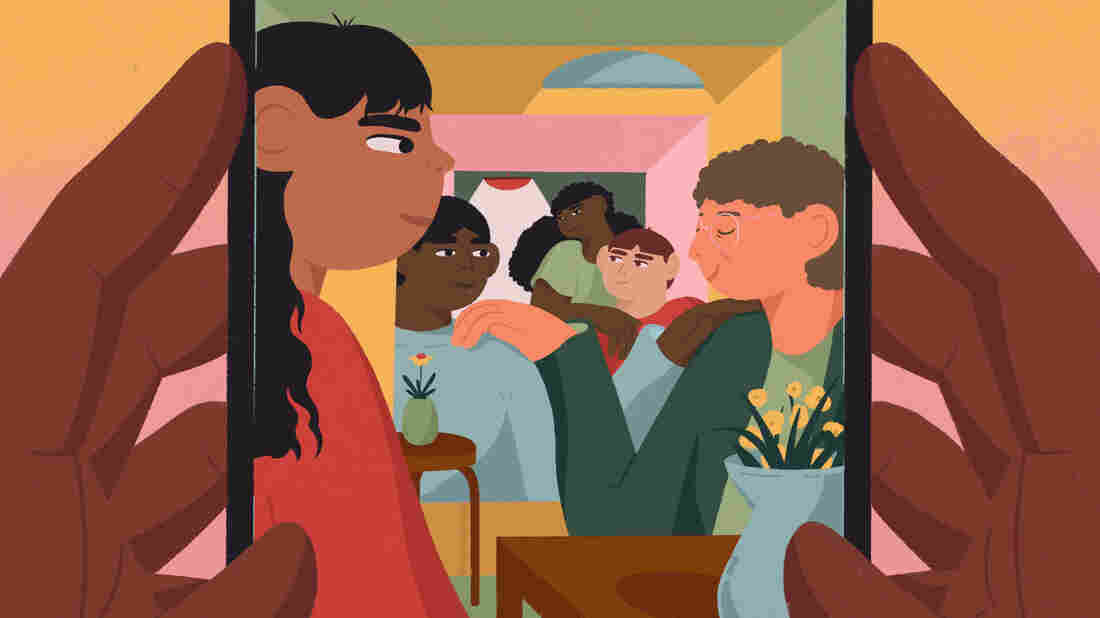 Though the pandemic has left us all less able to socialize in person with our close friends and community, we're still finding ways to use screens and other methods to connect and maintain relationships, research suggests. Janice Chang for NPR hide caption 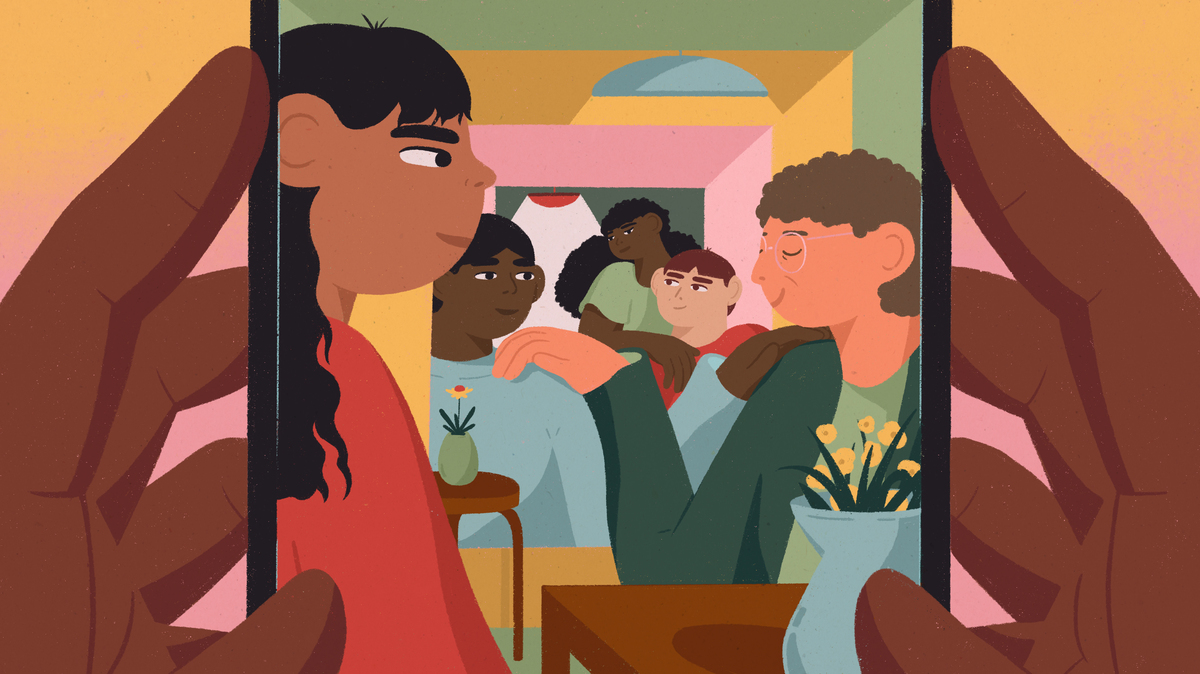 Though the pandemic has left us all less able to socialize in person with our close friends and community, we're still finding ways to use screens and other methods to connect and maintain relationships, research suggests.

When the coronavirus barreled into the U.S. this year, the predominant public health advice for avoiding infection focused on physical isolation: No parties, concerts or sports events. No congregating inside bars or restaurants. No on-site family reunions. No play dates for kids. Just keep away from other people.

Meanwhile, although social scientists supported that medical advice, they feared the required physical distancing would spark another epidemic — one of loneliness, which was already at a high level in the U.S.

"You might expect this would make things much worse," says Julianne Holt-Lunstad, a neuroscientist and social psychologist at Brigham Young University.

But several new studies suggest that huge increase in loneliness hasn't come to pass — at least, not yet. And the researchers studying the pandemic's emotional fallout say humans may have ourselves to thank.

'If The Trees Can Keep Dancing, So Can I' : A Community Poem To Cope In Crisis

"That sense of solidarity that people are feeling when they ... are collectively going through a challenge together seems to be a real strong protective factor."

Angelina Sutin, an associate professor of behavioral sciences at Florida State University College of Medicine, was one of a team of researchers who checked in three times between January and late April with more than 1,500 Americans ages 18 to 98. Her team's survey, which aimed each time to get at measures of loneliness, was recently published online in American Psychologist, a peer-reviewed journal.

Sutin and her colleagues had designed their survey in pre-pandemic days as a one-off look at how loneliness and other aspects of psychological health affect physical health. Respondents filled out a computer questionnaire about whether they felt lonely or isolated, whether they had people to turn to and whether they had preexisting health conditions.

Then came the coronavirus. By mid-March, state and local governments were issuing "shelter in place" rules. And even in many communities where it wasn't mandated, many people started avoiding face-to-face encounters.

Sutin and her colleagues realized they had a unique opportunity to measure the effects of physical isolation on loneliness. Between March 18 and 29 they asked those who had participated in their original survey how they were doing now that all those social distancing rules were in place. A month later the researchers checked in with the respondents yet again.

On a loneliness scale of 1 to 3, with 1 being not very lonely and 3 being very lonely, the score was 1.69 in the first survey, 1.71 in the second and 1.71 in the third — no statistically significant difference. "The thing that everybody thought was going to happen didn't happen," says Sutin.

There was some variation among the participants. Some people reported being newly lonely; some felt less lonely over time. The researchers say they found no racial differences in the responses, but did do an age analysis and found, as have other studies, that people 65 and older tend to be less lonely than the 18- to 64-year-old age group. The prevalence of loneliness in those 65 and older went from 16% in the first survey to 21% in the second and then dropped to 18% in the third.

Too Much Alone Time? Tips To Connect And Find Joy While Social Distancing

There are limits to what can be concluded from the findings, Sutin says. "This is an Internet survey, and so we did not capture people who don't have an Internet connection," for example. And people who have low incomes or who live rural areas were underrepresented.

The surveys also didn't include residents of nursing homes or assisted living facilities. Many of those people, Sutin notes, have had tremendous disruptions in their social networks during the pandemic and may not be as resilient as people living outside such facilities.

In hindsight, Holt-Lunstad says, she's not that surprised that the widely expected spike in loneliness didn't occur. As the pandemic shuttered many stores and businesses, neighbors began to rely on each other more, she notes.

"I was seeing a real outpouring of communities really trying to band together and look out for neighbors and for those who might be most vulnerable," she says, "and there was the hope that that would mitigate some of the effects of what was going on."

There have been other hints of resilience in neighborhoods and communities across the US. In June, researchers from Johns Hopkins University published a research letter in JAMA, the journal of the American Medical Association, citing a national survey done in April and May 2018, in which 11% of U.S. adults reported being lonely. The Hopkins researchers did their own national survey with other participants this past April, and 13.8% of their respondents said they were lonely — an increase the scientists characterize as "only slight."

And there are two ongoing studies being conducted by research psychologist Jonathan Kanter and colleagues at the University of Washington. The research team is texting people in the Seattle area and around the country nightly on their cellphones, asking them each evening to fill out a short survey that includes questions about how much social interaction they had that day, whether they felt understood or cared for by others and whether they enjoyed being alone. The data have not yet been published, but Kanter says the responses seem to be pointing in the same direction as the findings from the Florida researchers.

"The levels of loneliness in our sample and in our national sample also have been largely flat across this entire period of time," Kanter says.

Which all leads to the question of — why? Why aren't people reporting dramatically more emotional pain at a time when most are more physically distant from other people and normal routines than ever before? Neither Kanter's data nor the FSU study speak directly to that. But Kanter has some ideas.

We needed this. #coronavirus #milwaukee #bayviewmke

Kanter notes that in social critic Rebecca Solnit's book A Paradise Built in Hell, Solnit considered a handful of disasters — including the 1906 San Francisco earthquake and fires, the Sept. 11, 2001, terrorist attacks, the London Blitz and Hurricane Katrina — and found that many survivors experienced "an emotion graver than happiness, but deeply positive."

The anxiety that psychologists studying teen and adult use of social media call a "fear of missing out" has been associated with symptoms of depression and physical problems such as headaches and shortness of breath. In some ways, Sutin says, this sort of social pressure has taken a dive.

Lest her findings be taken as unremittingly good news, know that neither she nor other psychologists are happy with the relatively high background level of loneliness that existed in American culture before the pandemic — and continues now. They would like to not only flatten the loneliness curve, but drive it way down. They're also concerned about the people their surveys haven't reached — those with lower incomes and others who aren't online.

Dr. Sandro Galea, dean of the Boston University School of Public Health, does research investigating the ways mental health can be affected by social issues. "Perhaps it's good news," he says of Sutin's study, "but I think it's offset by other data that are emerging on poor mental health." Depression and anxiety, he notes, have both increased among all ages in the past several months.

Sutin, Kanter and Holt-Lunstad all credit the resilience they're seeing to the creative ways people are continuing to reach out and connect with one another. Across the world, including in the U.S., people have been phoning each other, signing onto Zoom meetings, having porch to porch or fire escape to fire escape chats. They have been attending virtual religious services, enjoying virtual dinner parties, and cheering on virtual or physically distant birthday celebrations, graduations, weddings, funerals and one-man marching bands. Some people have even entertained their neighbors, while keeping their distance, by dressing up and marching in dinosaur parades.

Holt-Lunstad says humans appear to inherently understand how important social relationships are — and many recognize those relationships don't have to include physical proximity. "As soon as we had that access threatened, we all felt this urge to connect with others," she says.

And sometimes that has meant connecting with people who live nearby, when family and friends are distant.

Dana Lacy Amarisa and her mother Jeanne Lacy have found a pretty creative way to do that in San Francisco. Sixty-four-year-old Dana temporarily closed her Kombucha business in Mazatlán, Mexico, when the pandemic began, and moved to San Francisco to join her 93-year-old mom during the pandemic. Dana and Jeanne say they've always been very social — Dana with her nightly salsa dance with friends, her mom with trips to the theater, ballet, bridge groups and two book clubs. Stopping those activities was difficult for Jeanne.

"It was very traumatic at first," she says. "You don't know what to do with yourself."

The neighborhood had taken to banging on pots every night at 8 p.m., partly as an affirmation of community, but Dana and Jeanne wanted to do more. Dana said to her mom, "Why don't we just dance?"

Jeanne, though she always loved to dance, says she initially found the suggestion "a little ridiculous," but figured it was worth a try. So they put up a sign on their garage door saying they would play recorded music and be out dancing in front of their house every Saturday evening. The sign invited neighbors to join them in the weekly dance party — at a distance.

For the first seven weeks they danced alone. Then neighbors started coming, some to watch, some to dance, some to chat. "Dancing is healing medicine," Dana says.

Jeanne says she still misses being able to go out to dinner with friends but is thrilled with the dancing. "It breaks up the isolation," she says. "I've not been lonely."

Dana and Jeanne plan to continue dancing as long as the pandemic lasts. And Angelina Sutin and her colleagues have resurveyed their study group.

They should know within about a month, Sutin says, if the positive effects of all the different social outreach efforts like these — the porch chats, Zoom dinners, dino parades and the like — have persisted in easing loneliness in other parts of the U.S. as well.