Accessibility links
How An At-Home Test For COVID-19 Could Help Control The Pandemic : Shots - Health News A single test that can give false reassurance sounds bad. But a $10 test for the coronavirus, if repeated daily, would discover real infections, say proponents of such tests as screening tools. 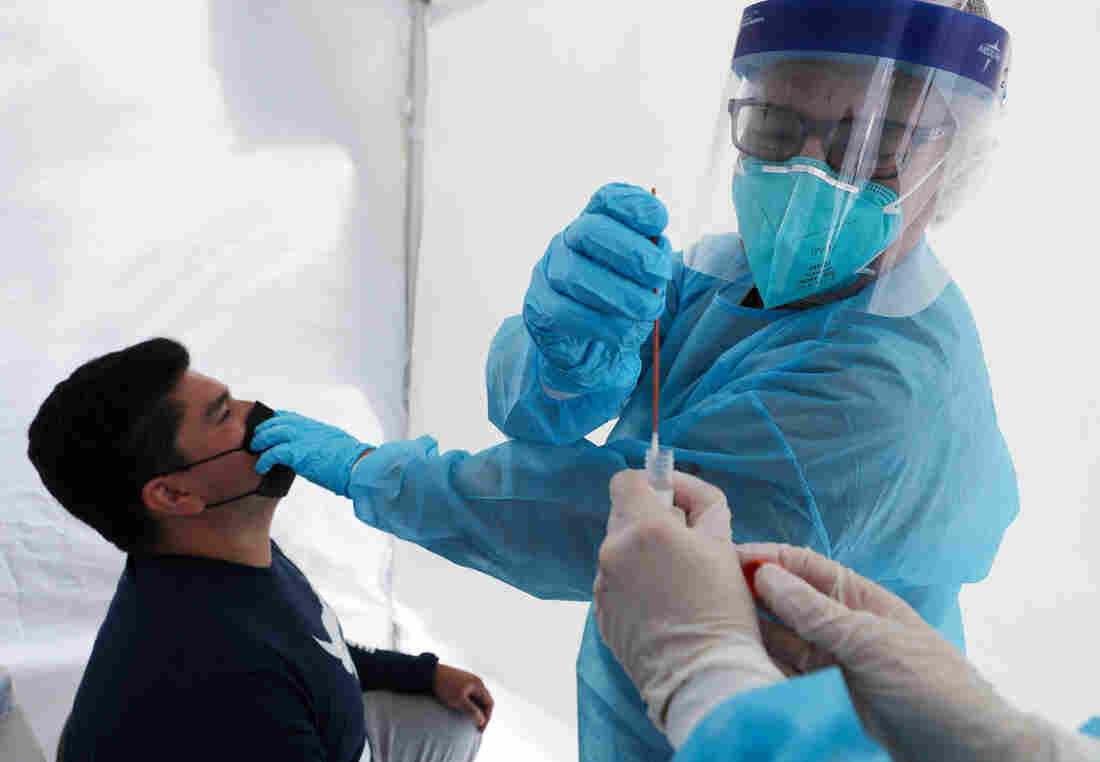 Dr. Glenn Lopez administered a standard test for the coronavirus to Daniel Contreras at a mobile clinic in South Los Angeles last week. Though highly accurate, such tests can take days or more to process. Mario Tama/Getty Images hide caption 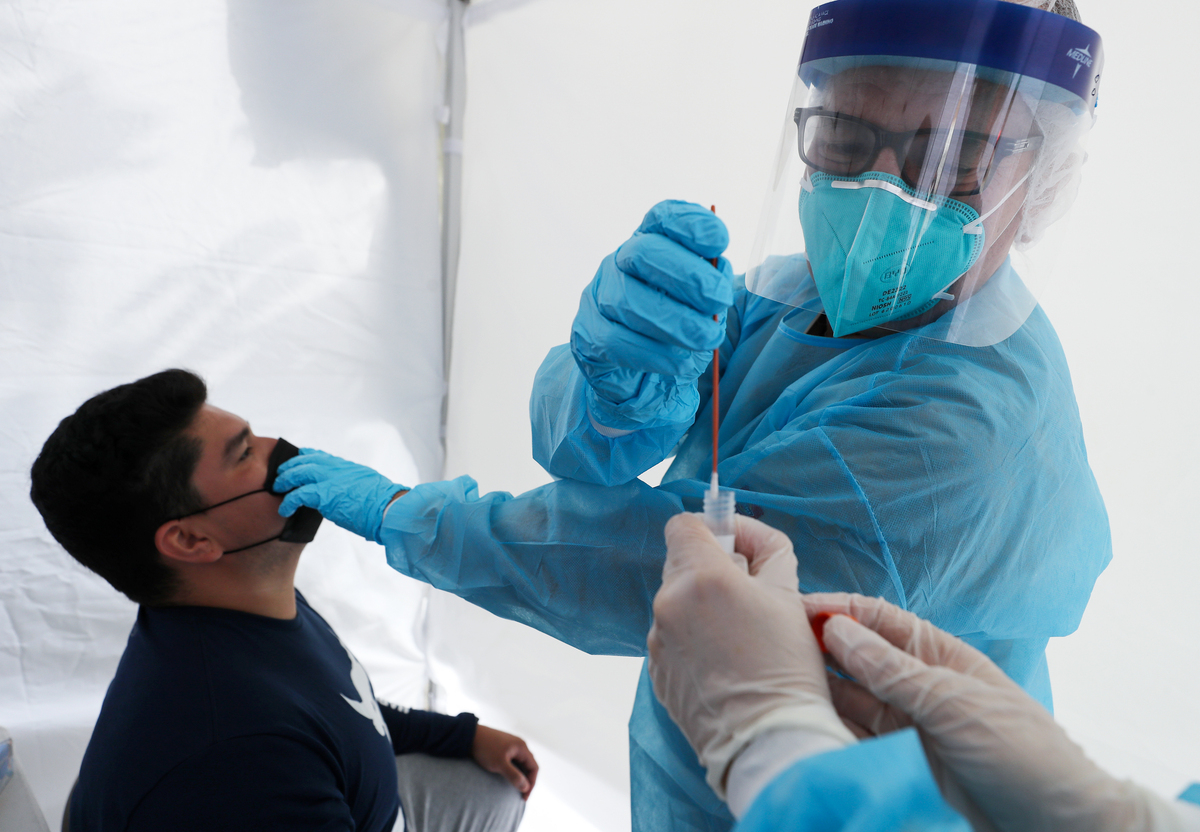 Dr. Glenn Lopez administered a standard test for the coronavirus to Daniel Contreras at a mobile clinic in South Los Angeles last week. Though highly accurate, such tests can take days or more to process.

Anybody who has waited for hours in line for a coronavirus test, or who has had to wait a week or more for results, knows there has to be a better way. In fact, the next generation of tests will focus on speed.

But what should the Food and Drug Administration do with a rapid test that is comparatively cheap but much less accurate than the tests currently on the market? A test like that is ready to go up for FDA approval, and some scientists argue it could be valuable despite its shortcomings.

At first blush, you wouldn't want a medical test to be pushing out untrustworthy results. And that's certainly the case for a medical diagnosis. But rapid test could be valuable if used to screen large numbers of people for infection repeatedly and frequently.

For example, some of the rapid tests under development don't detect the virus in a person who is in the early or late stages of infection — they only catch an infection at its peak. Dr. Michael Mina at the Harvard T.H. Chan School of Public Health says that's OK, under certain circumstances.

"As long as you're using the test on a pretty frequent basis," Mina says, "you will be more likely than not to catch the person on the day they might go out and transmit. And they'll know to stay home."

To be useful, such tests need to be widely available and affordable, he says. "I envision a time when everyone can order a pack of 50 tests for $50 and have those and use them every other day for a couple of months."

When it comes to controlling the epidemic, that could be an appealing alternative to the current laboratory-based system, an overburdened process that has become a serious bottleneck. These days, some people are waiting a week or more for results, and by then they have potentially spread the virus to others.

Highly accurate at-home tests are probably many months away. But Mina argues they could be here sooner if the FDA would not demand that tests for the coronavirus meet really high accuracy standards of 80 percent or better.

A Massachusetts-based startup called E25Bio has developed this sort of rapid test. Founder and Chief Technology Officer Irene Bosch says her firm has field-tested it in hospitals. "What we learned is that the test is able to be very efficient for people who have a lot of virus," she says.

It's nowhere near as good at detecting low levels of virus. But you can have the most sensitive test in the world, she says, and if you only test people once a month, that test, too, will miss a lot of people who are infected. So, her company is focusing on quick, easy and cheap.

"These are very simple strips," she says. "They're [like] miniaturized pregnancy tests. So, you can imagine you can't find anything more simple than this."

The sample for this test would come via a swab of the nose or mouth. Results would be available within 15 minutes, according to the manufacturer. Most important is the price.

"The test has to be affordable. It cannot work if it's not affordable," Bosch says. "Right now it might cost $3 to make it [or] $4 to make it. So affordable will be what it costs."

E25Bio would like to set the price at cost, though for the start-up company to stay in business, Bosch says, the test would need a government subsidy. The company has a local partner that's poised to produce a million of these tests a week, she says, adding that another company in the United Kingdom is poised to produce 8 million tests a day.

E25Bio has asked the governor of Massachusetts to approve the rapid test for sale — not for use at home just yet, but in pharmacies and out in the community.

To bring people back to work, or teachers and students back to the classroom safely, "this is the kind of test you need," Bosch says.

The company would like to pair the test with a smartphone app. The app would take a photo of the test result and upload it to a public database. The information would be stripped of personal details and precise location, but if people volunteered to take this step, she says, the public could crowdsource information about the spread of the coronavirus that would be useful to researchers. The information would also be available to public health authorities.

The company is in talks with the FDA about approving this test, even though it would be a departure for the federal agency, which has so far required a higher level of accuracy.

She isn't sure how the FDA is responding to the company's request. "This is a Pandora's box and this like is a black box," she says with a laugh.

In other words, the FDA doesn't want to take an action that backfires, and it also doesn't tend to reveal its thinking as it deliberates. The FDA told NPR that the agency weighs the benefits and risks of all coronavirus tests, but didn't elaborate on its thinking about this novel testing strategy.

"There's always a tradeoff here. There's no free lunch," says Trevor Martin, chief executive officer of the Bay Area biotech startup, Mammoth Biosciences. His company is also making a rapid test, based on the gene-editing technology CRISPR. Though CRISPR is best known for its ability to edit DNA, part of that process involves pinpointing specific sequences. And by targeting the coronavirus' genetic sequence, this approach can be highly accurate, he says.

"Our goal is to have a test that delivers extremely high-quality results with a single test. The same as you would get in a lab, or better," Martin says.

His company's test isn't likely to be on the market until the end of the year, which seems like the distant future, considering the pace of the epidemic. He agrees tests need to be affordable, but he didn't name a price range for the test.

Martin says precision has a place in controlling the epidemic, too. A test that can detect very low levels of virus is more likely to pick up someone with a mild infection, even in the absence of symptoms. And that's "super important if you want to prevent spread," he says.

Other labs are pursuing tests based on CRISPR as well. And two companies have temporary approval by the FDA to sell a rapid test that detects certain proteins — antigens — from the coronavirus. These antigen tests are less accurate than the standard PCR tests, which detect genetic material from the virus. The average wholesale price for antigen tests is in the $20 range. Such tests are currently in limited supply, and available at hospitals, medical clinics and some doctor's offices.

It's unlikely that there will be one single testing solution for the coronavirus, and the best blend of approaches is still a work in progress.